I’ve got another round of bad news from the next alphabetical chunk:  Indiana through New Jersey.  But first, a bit of good news.  Last blog post I mentioned the loss of the Balboa Pharmacy sign in Newport Beach, CA.  I called the store’s owner when I got a tip that the sign was back!  So, here’s the story.  Here’s the sign again from my 2013 photo: 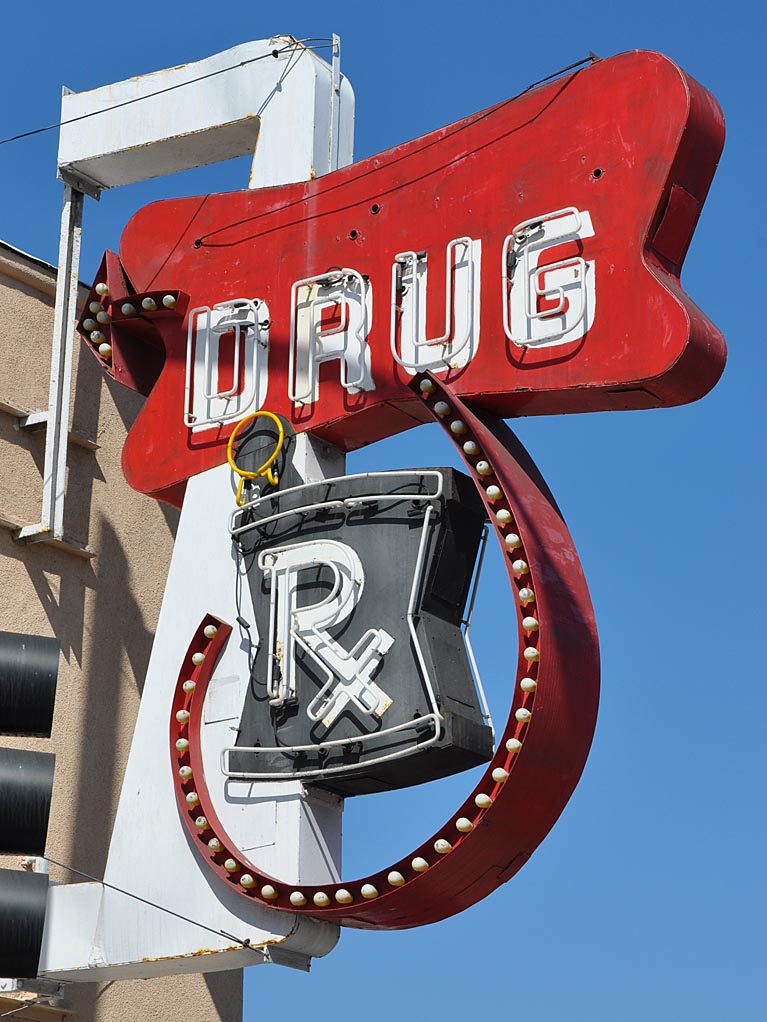 Yes, the sign was taken down in 2017.  Between windstorms, the City warned the shop owner that the sign was becoming precarious and that it needed to be removed.  The owner had to have it actually cut into pieces during the removal.  It didn’t actually fall.  But the owner had a sign shop  build an exact replica.  He’s working on getting the neon and bulbs lit again but it is up for now on the building  I’m dying to see it.  White Sail Realty has posted a photo of it.  I don’t see any tubing holes so I’m skeptical about neon being added:
https://deskgram.net/p/1870544260386896939_1112977506 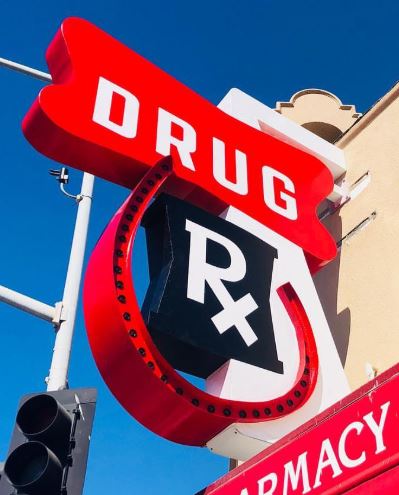 Another update.  The Star Bakery sign in San Francisco in the last post is evidently gone-gone.  You may remember (or if you look back to that post) that it was covered with a pediatrician’s panels.  I’m told that the sign itself has been replaced now.  We can only hope that the Star Bakery sign was saved somewhere.

OK then — moving on to Indiana.   The Rihm’s Drive-in Liquors sign in Cambridge City, IN is still mostly intact (the bottle & neon but the original, corrugated middle panel has been replaced.  Here’s the previous look: 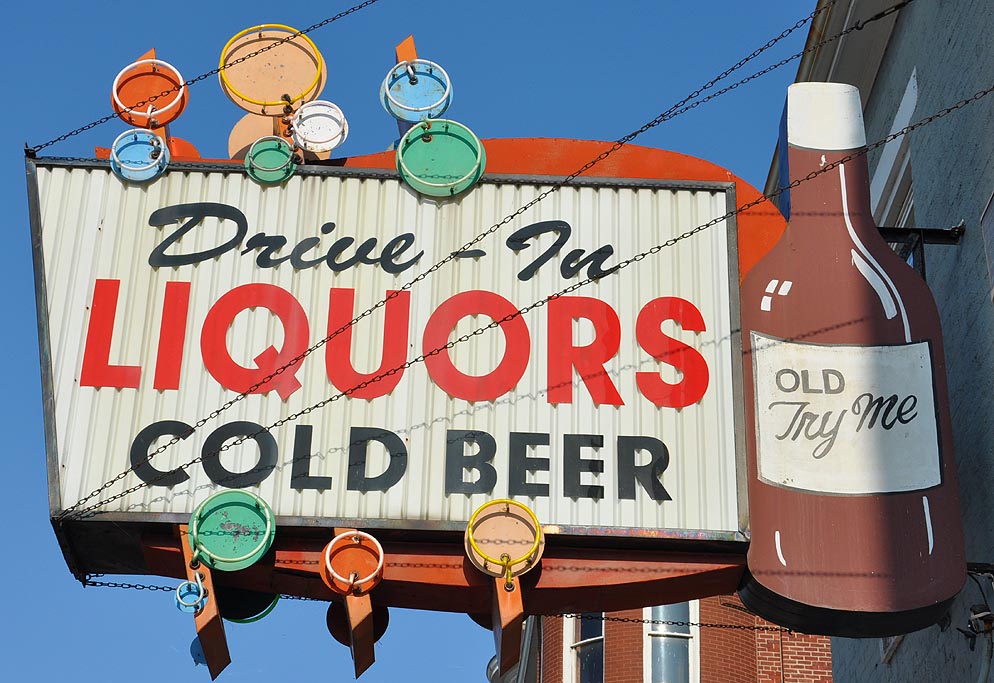 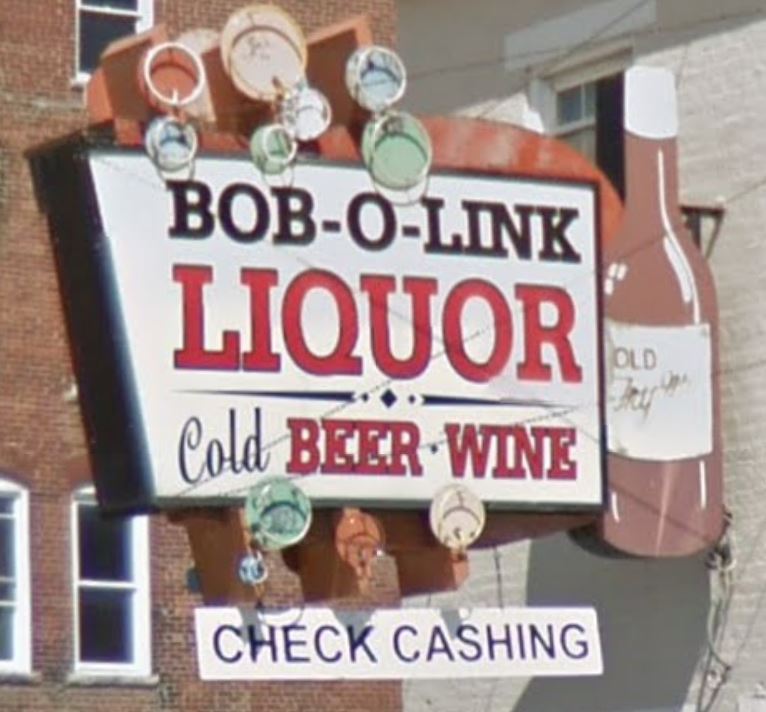 The hanging sign and facade sign at the Victory Bar in South Bend, IN are gone now.  Here’s what will be missed:

Gone, too, are the Compton’s Hardware signs in Tipton, IN:

The Sam Wolf sign in Indianapolis has been defaced.  Here’s the “before”:

And the “after” from 2018 Google Maps.  Gosh, is that a sign shop guy removing the rest of the neon? 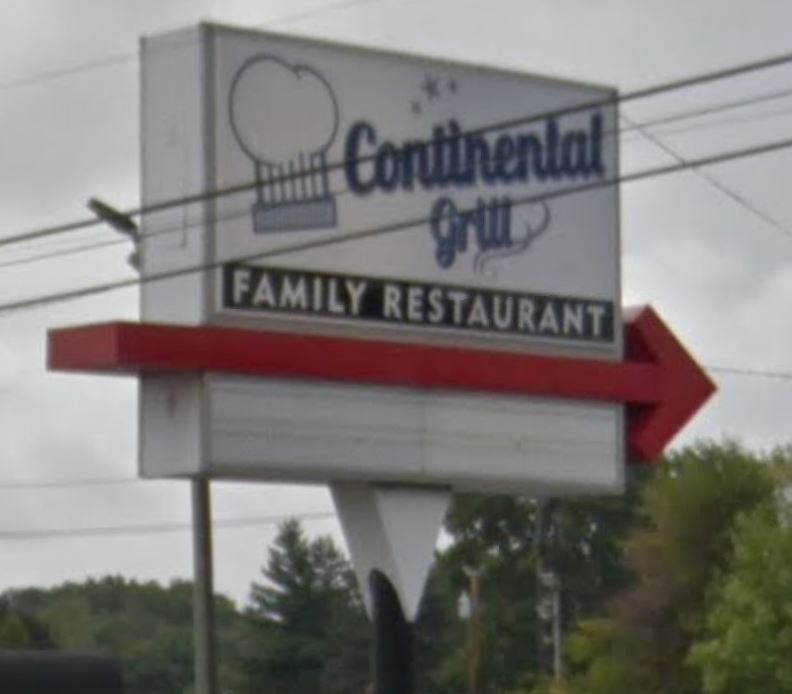 Moving on to Kansas.   This prominent sign in downtown Junction City, KS is missing from the building now.  I looked and looked online and couldn’t find any news about the why.  Sure hoping it’s in the shop being restored but it seems unlikely:

Both of these signs in Larned, KS at different businesses are gone now:

This one in Overland Park, KS — yes, gone:

has been stripped of neon and turned into this mess: 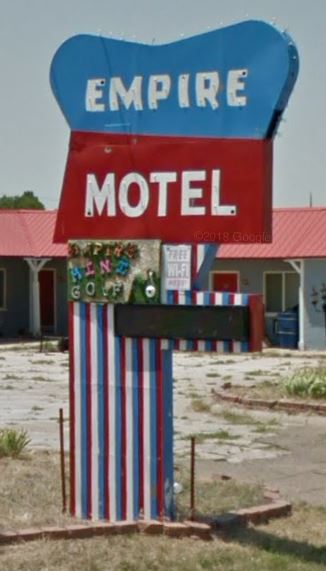 This one in Tonganoxie, KS is gone now:

And this one in Wichita, KS — gone now:

Moving on to Kentucky.    This one in Hopkinsville, KY is gone now:

and this oldie in Maysville, KY — gone:

One bit of bad news for Massachusetts.  This sign in Auburn, MA:

is now crapped up with backlit plastic: 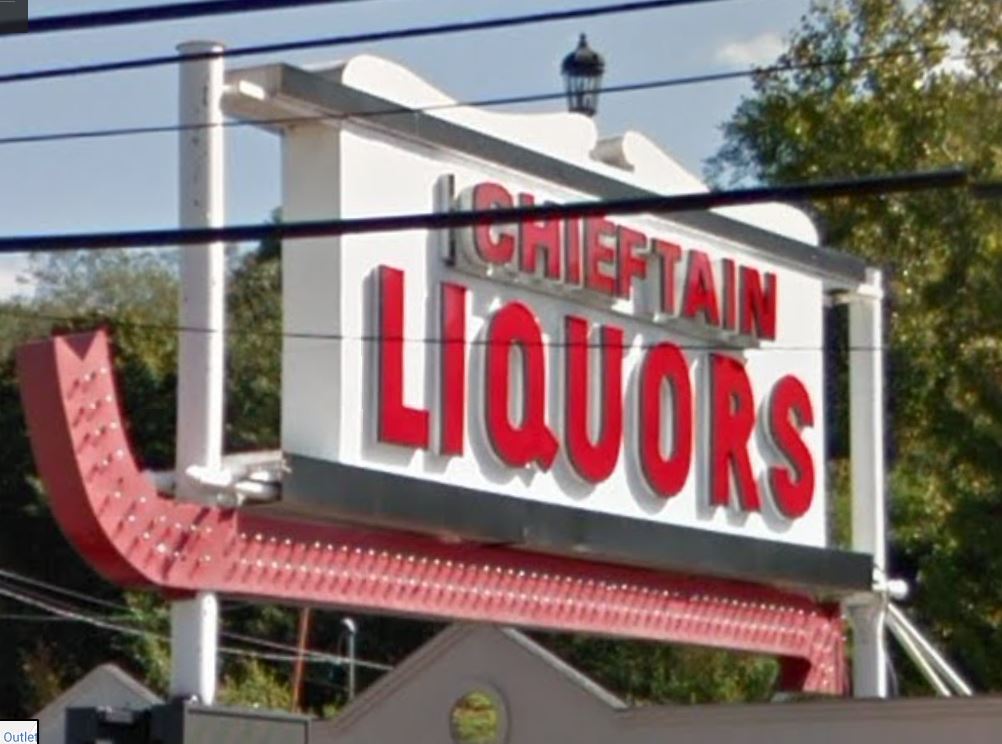 A few signs to report on in Michigan.   This one in Canton, MI is gone now:

Only one loss to report from Minnesota.   This rooftop sign in St. Paul is gone now:

A bunch of sign losses in Missouri.  This one in Belton, MO is gone:

This one in St. Joseph, MO is gone.  Probably small enough that a collector got it.  Ya hope:

In Kansas City, these Sam’s Bargain Town signs are gone:

These two signs in Kansas City are also gone:

There were two signs at this used car lot in Kansas City.  This one is gone now:

has been repainted again.  Surely it must have been far nicer originally:

This one in St. Louis, MO is gone now:

Only one loss to report on from Mississippi.  This Holiday Inn inspired sign in Houston, MS is gone now:

And one loss from Montana.  This sign in Billings, MT:

has been reworked with plastic.  How painful is this?

One mention for North Carolina.  I’m worried about this one in Raleigh, NC.  Here’s what the sign looked like in 2005:

Yes, the neon was already missing but there were still nice details.  And this sign is HUGE.  In 2009, the sign was repainted which was good and bad.  The text panels were completely painted over and the tractor paint job was so-so:

In 2018, the sign was removed so that the building could be demolished and replaced (most likely with something much taller?).  Now, supposedly the sign will go back on top but you wonder.

One sign to report on from North Dakota.  This one in Grand Forks, ND is gone:

Moving on to Nebraska.   This sign in Bellevue, NE:

…has lost its neon and its corrugated plastic panel.  How awful looking is that backlit plastic? 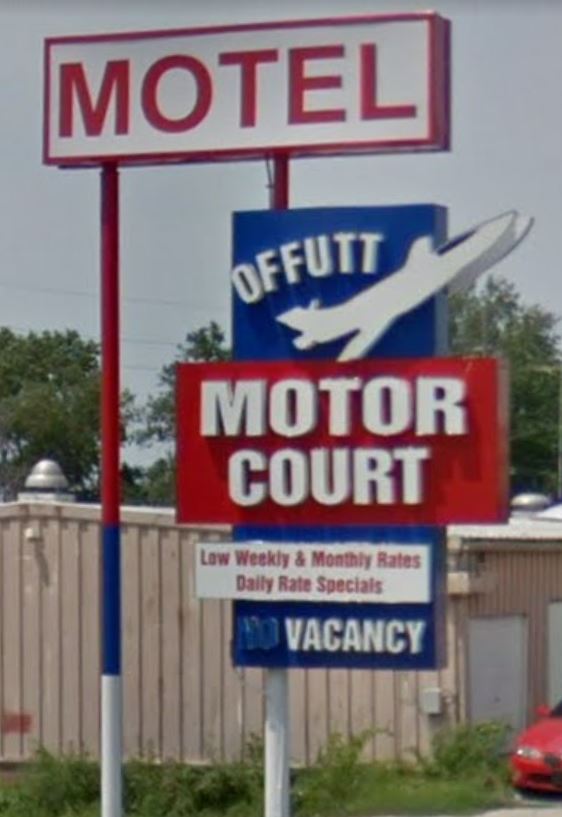 This sign in Omaha, NE has been “saved” only sorta kinda.  The before shots:

And now submerged in the dirt in an upper level new apartment complex.  Yeah, up there where you really can’t even see it: 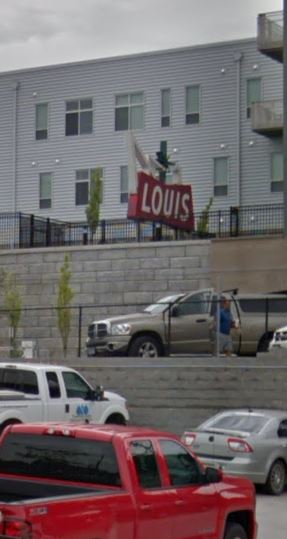 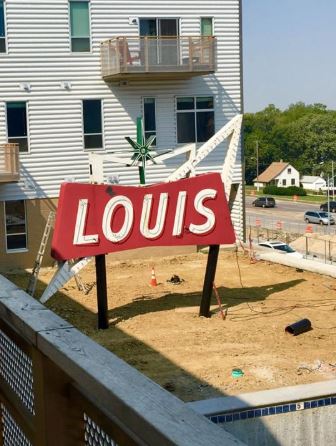 And, closing out with New Jersey for this post.  You may have heard that the Marcal Building in Elmwood Park, NJ was destroyed in a fire last month and that this sign went with it:

This beauty in Irvington, NJ:

And lastly, this beauty in Springfield, NJ:

is apparently gone.  Whatever’s under that vinyl covering looks far too rectangular to give me hope that the neon is there under it: 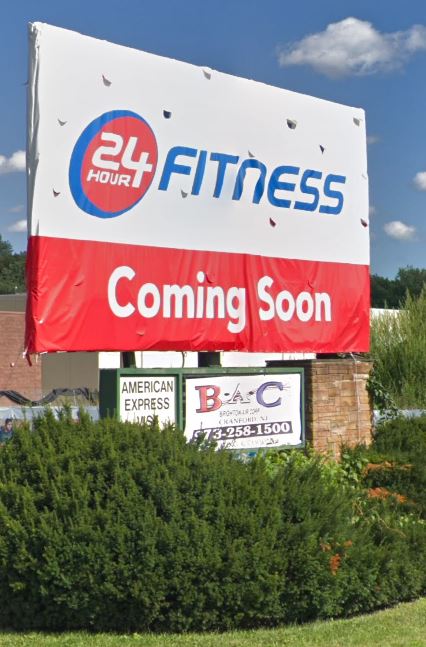 OK.  So, if you’re not sick to your stomach, then you’re not human and you have no appreciation for history or art.  BUT the good news is, out of all the signs I checked on so far, there are thousands that are still in place.  For now.  If you want to cheer yourself up, scoot on over to my website to see what’s still out there waiting for your visit and camera:

http://www.roadarch.com/signs/1.html
I probably have two or three more posts (and two or three more weeks) before this gruesome project is done.  Then, I’ll head off for some shooting and sharing and we’ll get back to focusing on the survivors.