Many of you have asked me how I find so much “good stuff” on these roadtrips.  The truth is, 95% of what I “find” is pre-planned.  If you travel old highways parallel to the interstates, you may find some interesting old things. But they are few and far between. What you are witnessing in your own town and in your own state, is happening everywhere in America. Old commercial strips are being replaced with a monotonous mix of chain stores.  “Dated” mid-century buildings are being demolished for contemporary boxes.  Neon signs are being dumpstered for  plastic box signs.  Treasures are being lost on a daily basis.  The time to travel and see them is now!

If you want to maximize the SPH (sights per hour) on your trips, it pays to do some research and planning.   Here then is my “road warrior” methodology.  I keep lists, organized by state and city, of things that I want to check out someday.  I’ve been doing this since around 1999 so the lists for each state are huge.  These lists are done in a Microsoft Word table.  I can then sort alphabetically by city if I want to.  I color code the rows:  bright blue for “must sees”, bright yellow for “wanta see”, white for “could live without” and light yellow for “done”.  You don’t see this on the black and white printouts that I take on trips which are shown below but it helps with putting a trip together.

I find out about all these places through magazines, books, websites, as well as Google and Flickr key word searches.  I added to these lists — daily.  Then, just before a big trip, I’ll spend days, even weeks, doing more internet searches for things that might not be on my list yet.  Nevertheless, there are always the inevitable disappointments of coming home and finding out about things that I missed that were just blocks away from where I was.

When it’s time to put together a trip, it’s pretty much a matter of plotting out things on my list with the most efficient path between them all.  I’ll give you both methods that have worked for me.

In the past, I used a lot of paper.  I printed individual maps for each place or for clumps of things in the same city.  I organized the best route using the “sticky system”.  I tore small post-it notes into little strips, wrote the name of each destination or city, and then stuck them to an atlas page: 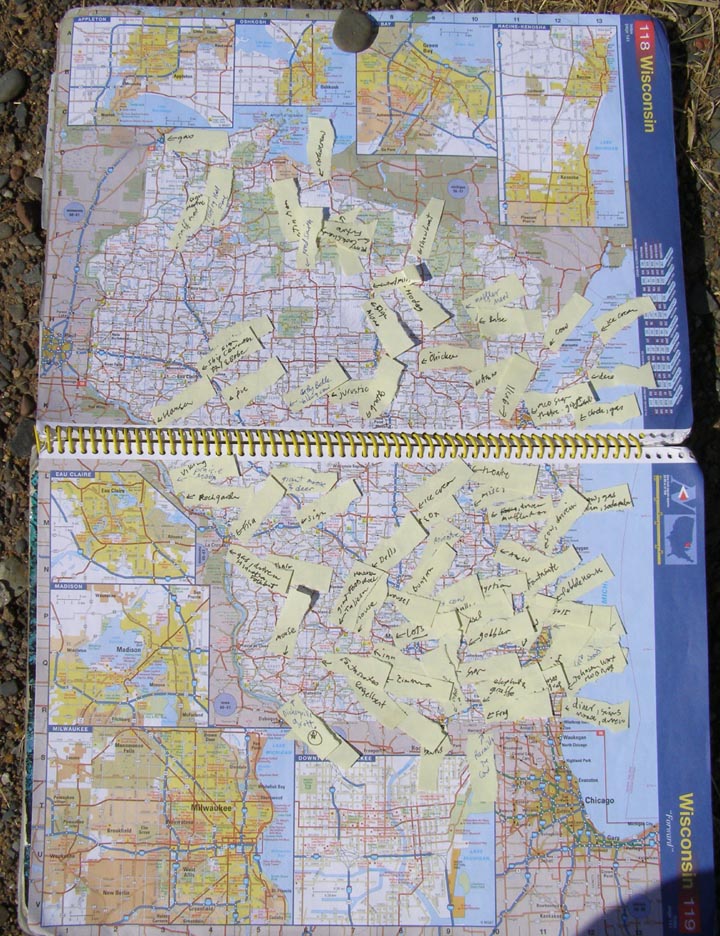 From this, I would organize a list from my state lists so that I could just bang down through things in order while I was on the road.  During the actual trips, these stickies tended to fall off.  I gave in to just circling destination cities right on the atlas page in pen.  I then drew “as the crow flies” lines right on the page which helped me to pick out the most efficient path of roads.

I did pretty much the same thing for printed city maps using just pen instead of the stickies.  Here’s a particularly dense map full of destinations.  A GPS system could never give me this kind of at-a-glance information. 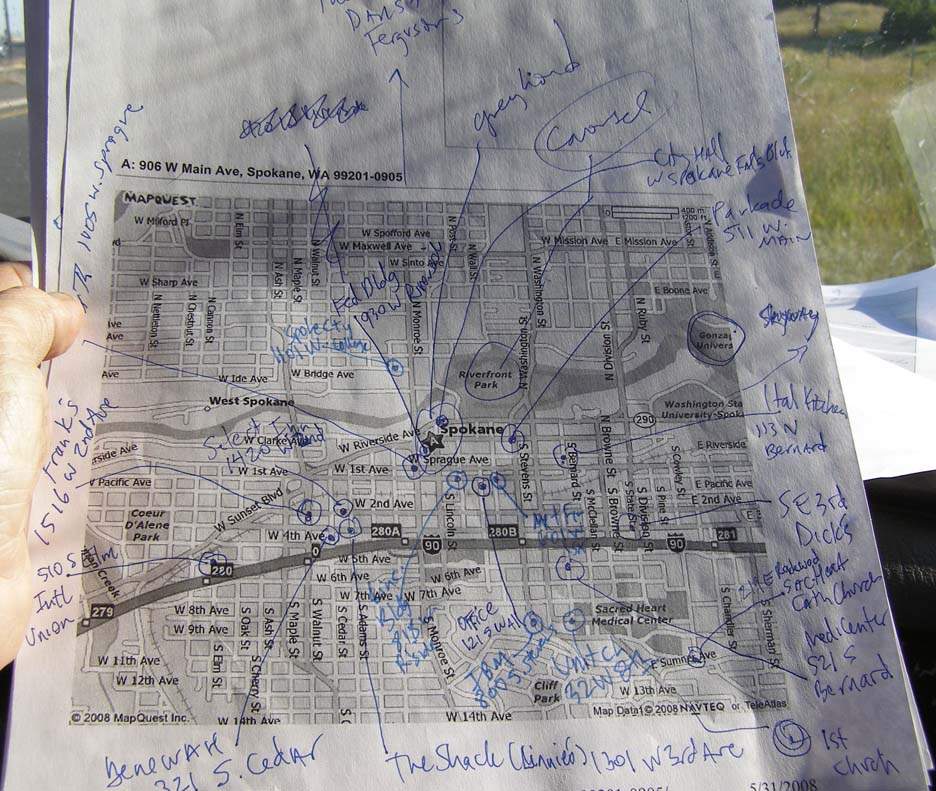 This kind of map was used as an overview.  I paper-clipped more detailed maps behind it when there were places bunched together or street names were not shown.  I put an “X” next to the place on my list and then crossed out the places on the map as I did them.  This helped me to make sure I didn’t miss something and gave me a tiny sense of accomplishment.

Some towns had just a stop or two.  The maps for those destinations just needed to be detailed enough to give the highway and street info to get me there. 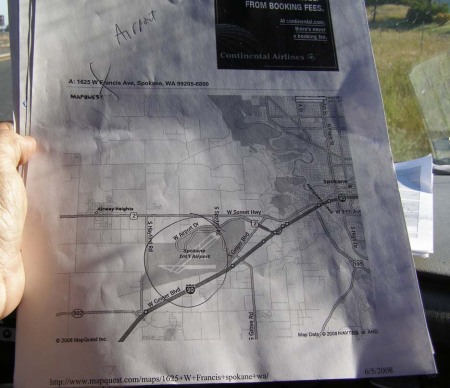 Working with the my list and these maps, I then ordered all the stops into a trip list.  The maps were put in the same order as this list.  Therefore, during the trip, I could just focus on driving and taking photos. 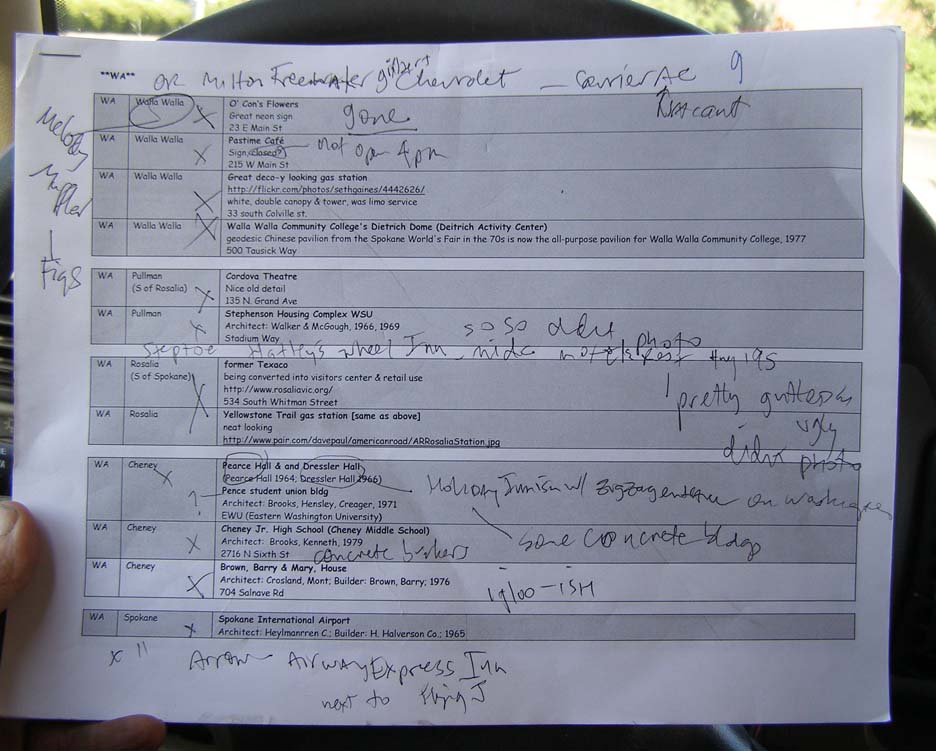 As you can see, I scribble notes on these lists during the trip.  These notes are entered on the master list when I get home (places or things that are gone, a new place that I found that wasn’t on the list, a change in business name, etc.).

For a big trip, the lists and maps are binder-clipped by state.   These stacks can be pretty intimidating at the start of a multi-week trip: 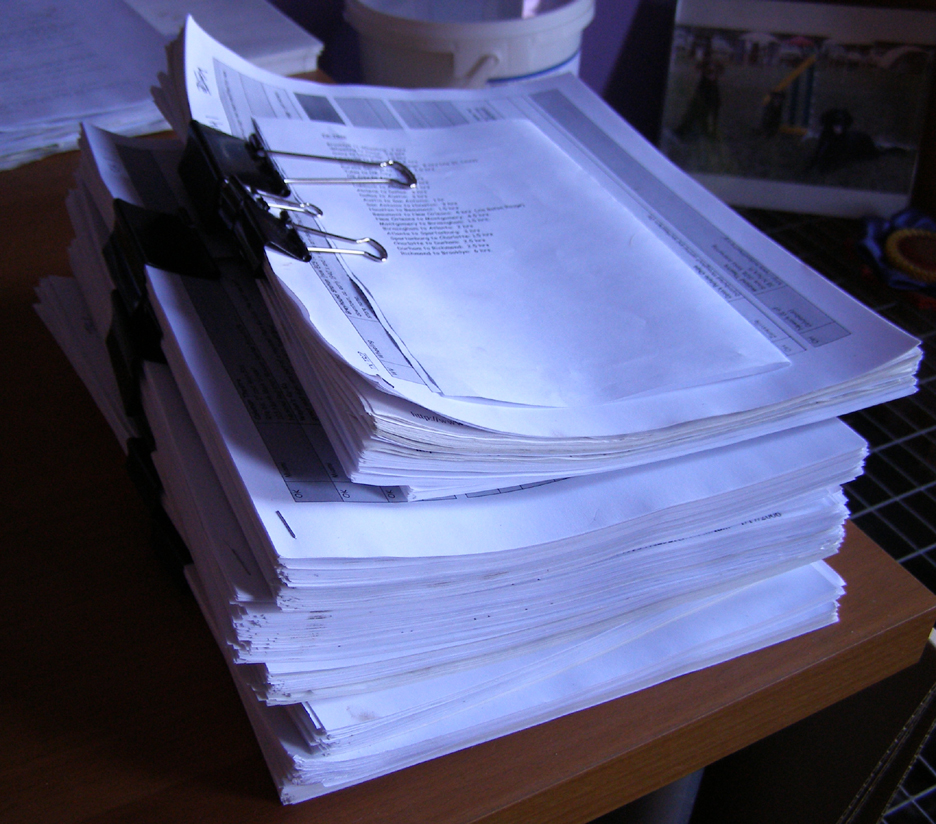 These days, instead of printing the maps and using stickies on atlas pages, I use Google Maps and my iPhone.  I am still organizing and printing my lists with the places, addresses, descriptions as described above.   But the first step is entering all the addresses for the places on my list for that area or state that I’m heading in Google Maps “My Places” on my computer.  From all the little pushpins, I can then figure out the most efficient path between them and organize the list for my trip: 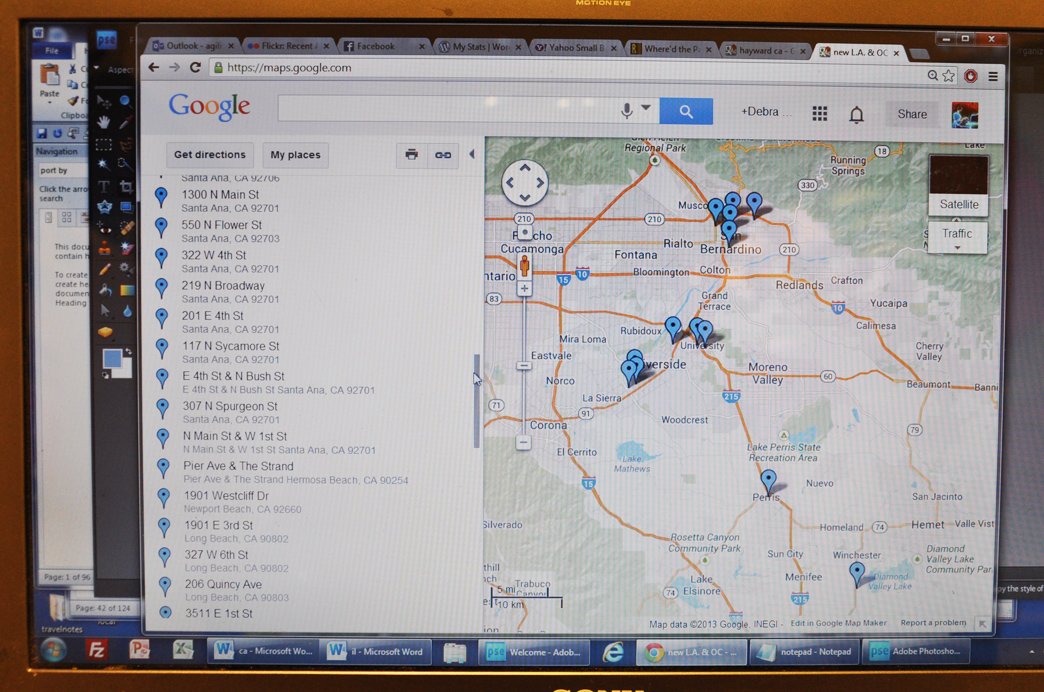 It shows all those same pushpins that I entered on my regular computer.  If you click on any of those pushpins, it will show the address which corresponds to those on my list.  It’s nice to be able to zoom in and micro-manage my route if I change things up a bit.  And it saves a lot more trees.

I hope this helps you develop your own strategies for getting the most out of your roadtrips.  Enjoy!