Today was AC day.  So, I lost a half day hanging out at a Pep Boys in El Paso.  I’ll tell you one thing, an 8AM appointment made two days earlier doesn’t make a difference.  They will pull your vehicle into the bay and then proceed working on whatever other cars are ahead of you.  The waiting on a sunny day was painful.  If I hadn’t been the pushy New Yorker that I am, I’m sure it would have taken a couple hours longer.  I plunked the $333 for a new AC valve kit & vacuum hose on my credit card and I was on my way.  I was warned that I might have more trouble with the AC later since there was no way that the amount of freon missing could have leaked out of those parts.  So, I waited for the next shoe to drop but the AC worked fine the rest of the trip.  Fine, for a Chevy Astro van, that is.  Which means, during intense big city traffic, it’s about 80 and the engine sounds like it’s gonna stall.  And freeway driving, esp. if there’s a hill involved, you have to let up on the gas pedal to let the cool air flood in.

So, this will be a short post since shooting was limited.  Let’s start with some El Paso shots:

I hope that a new tenant is never found as I’m sure that the signs and probably the bulb lines, maybe even the canopy, will be ditched:

Bell Gas stations are all or mostly gone but there are still some of these signs around.  This one adapted, but not so clearly, for a car repair place or used car lot (can’t remember which): 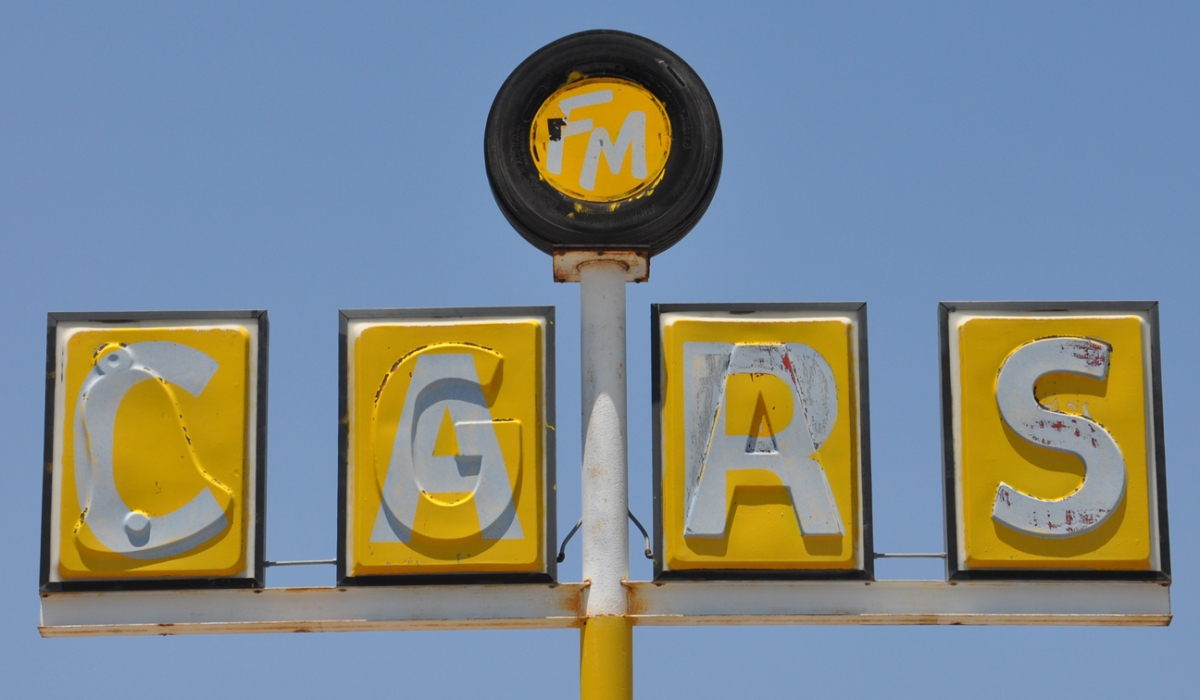 This sign is tucked away behind the Robin Hood (mobile home) Park.  I’m sure there was more to the text on the panels but those little sign-topper thingies are wonderful:

Moving on to Alamogordo, NM where the Satellite Inn sign which I shot in 2012:

is now resting in the unused pool.  When the motel became a Rodeway Inn about a year go, the owner moved it there.  If things don’t work out with Rodeway, they might put the sign back.  Or move it somewhere else on the property.  Or…. who knows…

From the little town of Carrizozo, NM, this sign hangs over an antiques store.  I’m not sure if it’s vintage or new but the script letters are wonderful: