This was the most prolific AND most beautiful day of the trip.  Sure, it was over 100 degrees but, oh, the gorgeous white clouds!  They make a nice photo look spectacular.  Most of the time, the clouds even cooperated in not blocking the sun.  So, this will probably be the longest blog post of the trip.  Let’s get cracking!

All from Fort Worth unless indicated below:

A couple of palm tree signs: 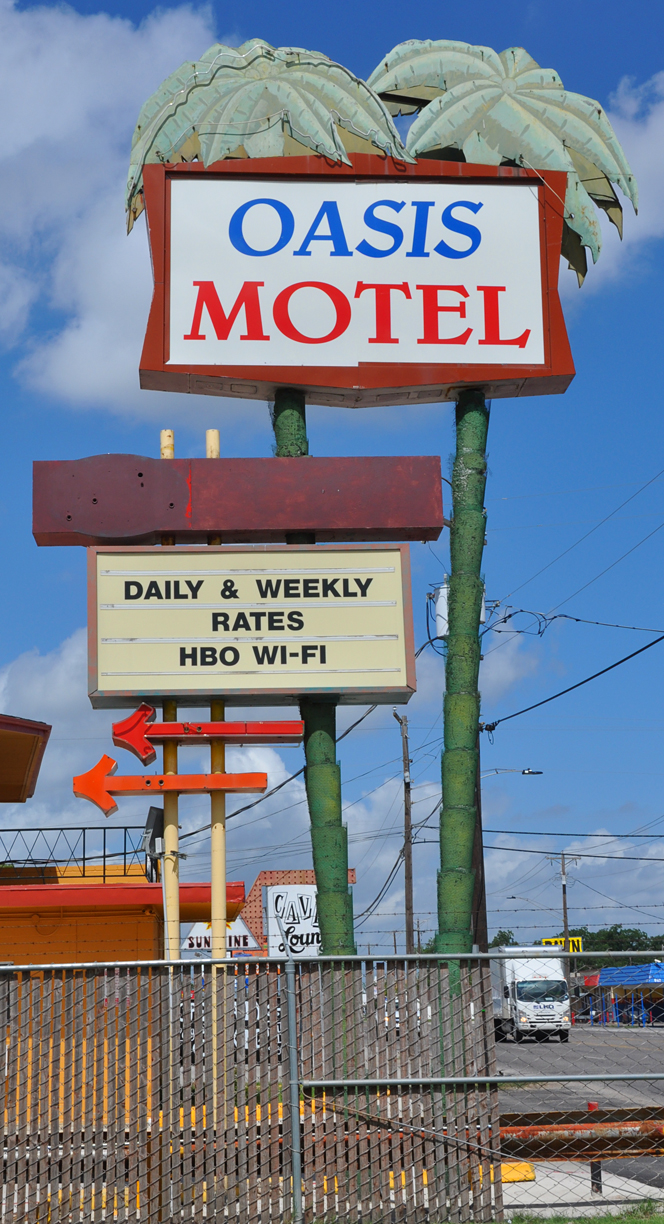 There was another one of these signs (identical and same name) in River Oaks, TX which was demolished in 2012:

Heartbreaking.  This sign in Grand Prairie has been significantly altered.  The green sign with the dancers on the right is gone now:

Here’s what it looks like now (note the Garzas sign behind it has been altered as well):

The Starlite Room has also changed a bit.  My photo from 2011:

Now Chinese food.  At least the rooftop sign has been left alone (except for the one star removed).  Probably too much trouble to remove it:

Now a boring police station but I’m glad they kept this bit of the building.  I can’t find any photos of what it looked it:

A couple of signs from Grand Prairie: 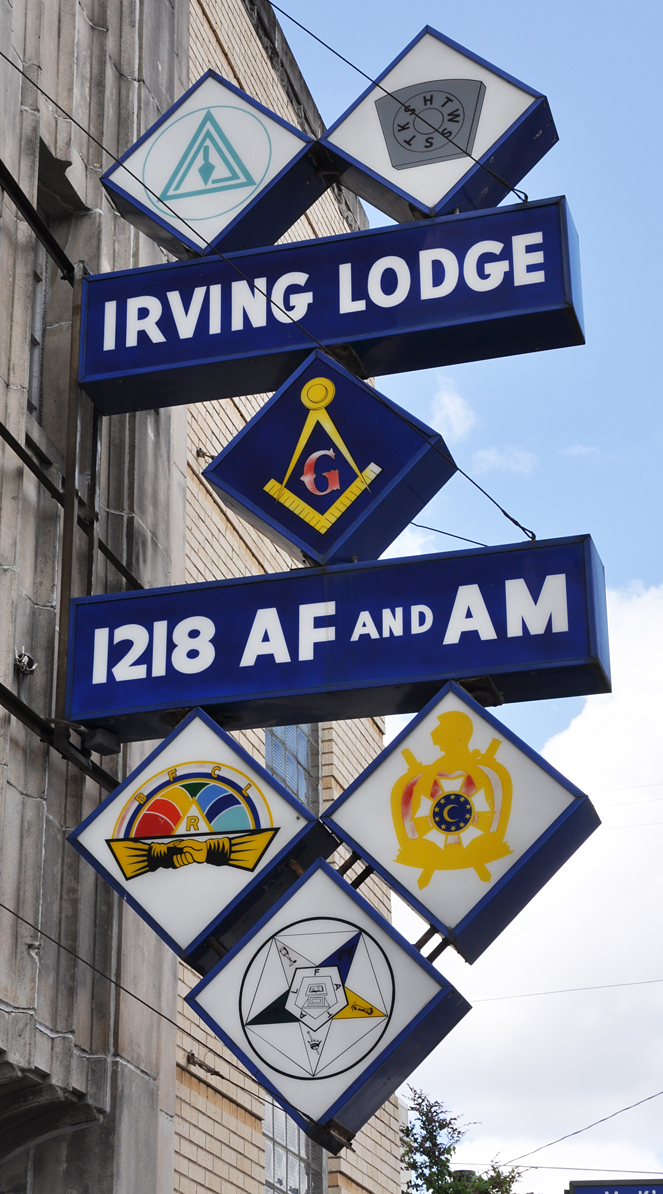 Moving on to Dallas:

I suspect that the “RAYS” discs might have revolved originally:

Let’s pause for multiple shots from Lone Star Donuts.  The zig-zag roofline and office on the second floor on the left:

The nice plastic sign with faux wood grain porcelain enamel sign pole.  By the way, the “Since 1950” refers to when the bakery was founded.  This location opened here in 1967.  It’s not clear if this building was already there then. 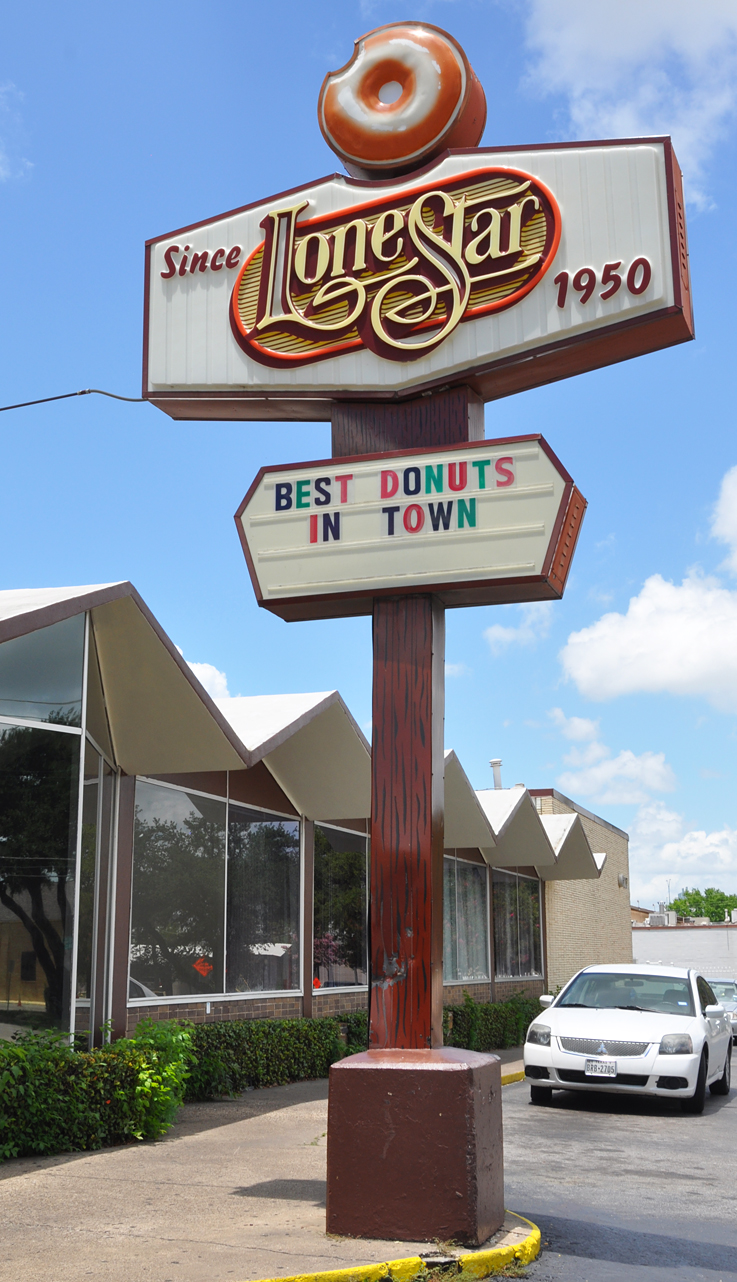 Inside — some nice original details:

That Jerry’s supermarket type is incredible: 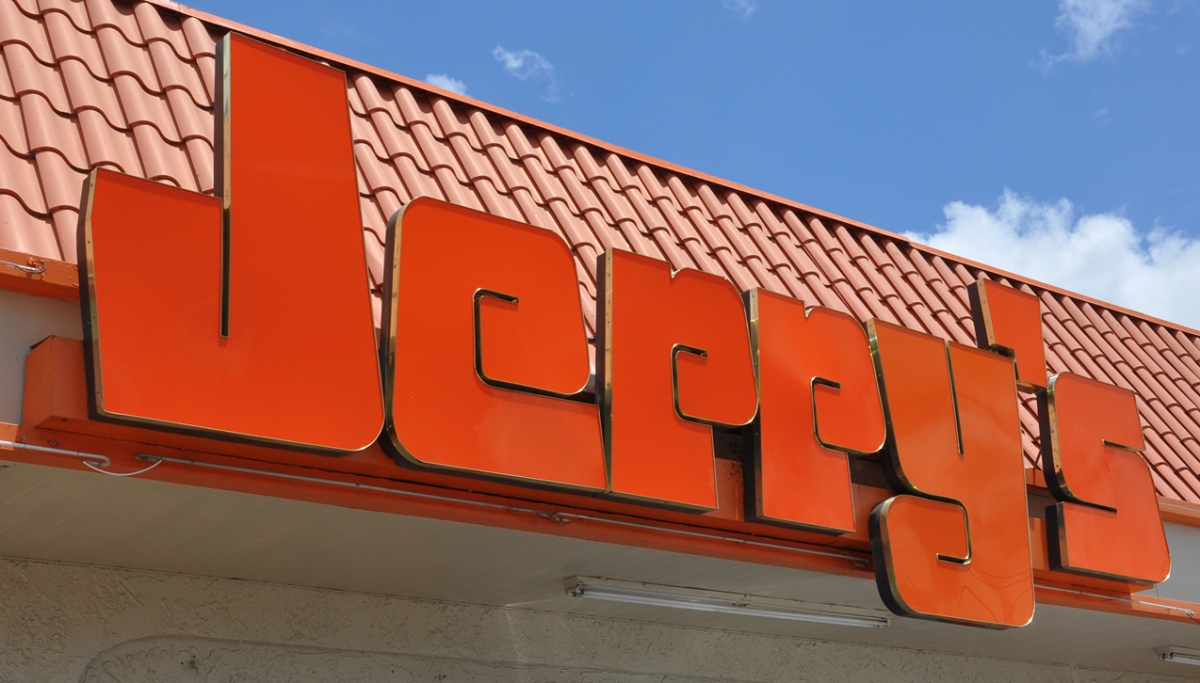 A bank? An office building?

FAMSA is a big furniture and electronics store.  This FAMSA panel revolved originally but now just blows around in the wind:

There were at least two or three other Optical Clinic signs with giant glasses in the Dallas area.  I believe this is the only sign left now:

I see that I posted this guy to my blog already in 2008.  Ah well, he deserves another inclusion:

This sign-topper is located at Johnny’s Motor Co. in way southeast Dallas:

This one is in Corsicana at Bill’s Fried Chicken:

Back in Dallas.  This sign originally read “Motel Winway” with “Coffee Shop” text on the arrow below.  You can see the patching and repainting if you stare at the sign long enough.  The top arrow had bulbs.  Here’s a photo showing its previous look:
https://www.flickr.com/photos/mollyblock/7600625046/

The Boyd Hotel sign — now maintained (lit at night) by the Local restaurant which is housed in the ground floor:

One more for this post.  I wish the bottom of this sign hadn’t been defaced.  It originally read “Louver Windows”.  Evidently, that happened when the space housed the Club Clearview:
https://www.flickr.com/photos/claycoleman/3621089002/

If you haven’t been keeping up with my Flickr photos from this trip, there’s loads of great stuff there:
https://www.flickr.com/photos/agilitynut/