The last day of the trip.  For those of you that are into stats & facts, there were 16 days on the road which included the two days of grueling nothingness all the way up to Oregon and then back home from Washington.  I drove about 5,500 miles on this trip and I spent about $1,260 on gas.  My gas mileage was probably even worse than usual due to running the A/C all day, nearly every day.  Poor Sparkle.  Gas was nearly a dollar cheaper in Oregon & Washington than it is in California. So, that helped a little.  I took about 1,800 photos which will find their way to my website over the next few months.  What I post to this blog and Flickr is just a sampling of the photos taken each day.

Let’s start this final batch of photos in Ellensburg.  This sign is lit and animated at night with “Auto Glass” and “Seat Covers” flashing sequentially:

I believe this place in Gleed was built last year.  While not vintage, I’m always thrilled to see the tradition of giant stuff is still alive.  I’ve got loads of giant coffee pots at my website here:
http://www.roadarch.com/vessels/coffee.html 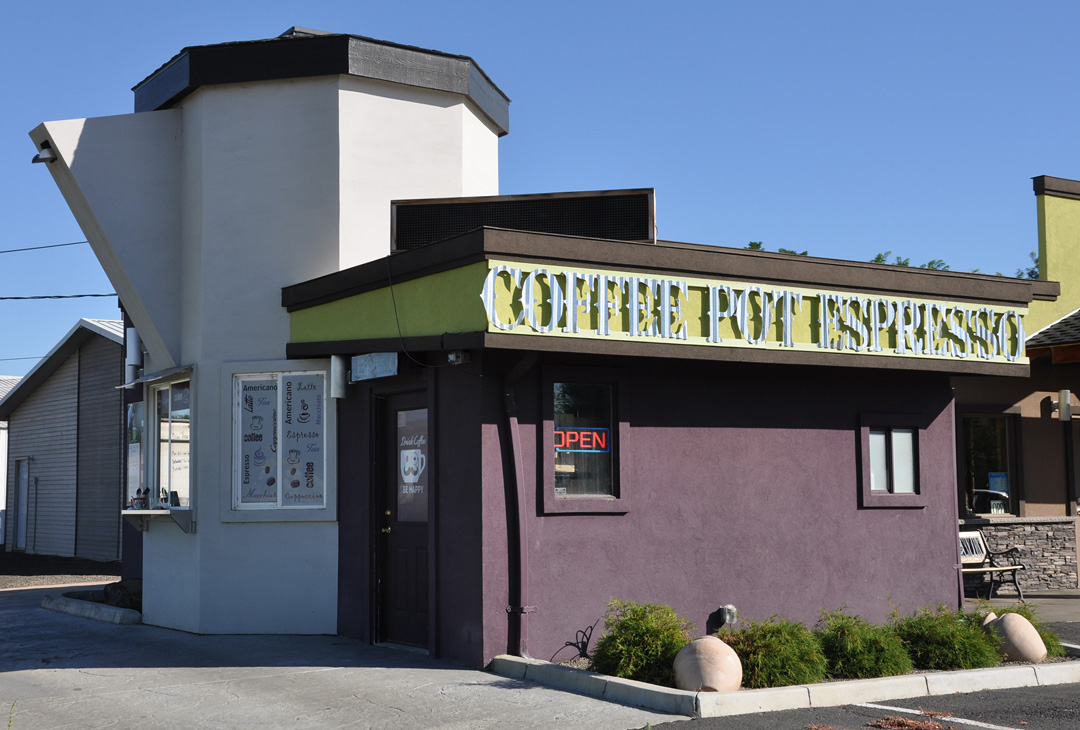 I stopped by the Yakima Valley Museum in Yakima to see if there had been any new additions to the Neon Garden.  There were a couple of new vintage signs — but what really caught my eye was this guy.  Earlier in this trip, I was stunned to find that the three giant cow heads in Puyallup were gone.  Evidently, the Fairgrounds remodeled the entrance around 2012 and the cows disappeared.  I was hoping that this was one of the missing statues.  It’s a dead match.  However, it seems this guy came from a place in Yakima.  For a variety of cow heads like this, there are more at my website:
http://www.roadarch.com/critters/cows1.html

While I was at the museum, my pal Andy showed me a photo of one of the signs in storage.  It’s a blurry photo since I just shot it from his computer screen.  But you can see what a giant stunner this is.  It was originally located in Yakima.  The fish are installed over a metal grid meant to simulate a net.  The boat is a mechanical element.  It is separate from the text panels and physically rocked back and forth over the neon waves.  Andy has been working with the city to find a place to install it, nothing definite yet, since it’s too large to install at the museum. 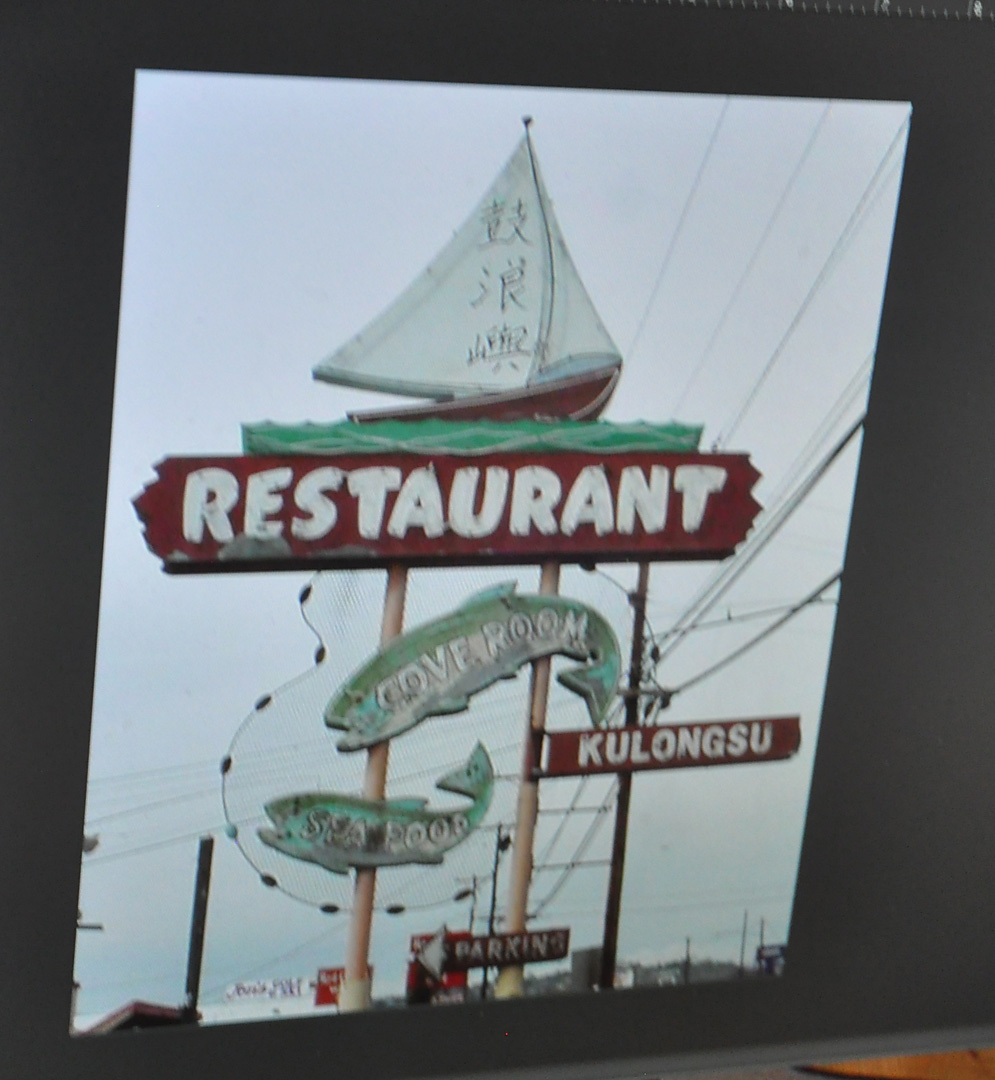 Yakima still has lots of wonderful old signs.  These Bear Alignment signs are still scattered all over the country.  This one is a little crude looking,  I kinda like his Mickey Mouse ears.  For info about these signs and more examples (larger and neon examples), I’ve got a bunch at this page:
http://www.roadarch.com/signs/ca14.html 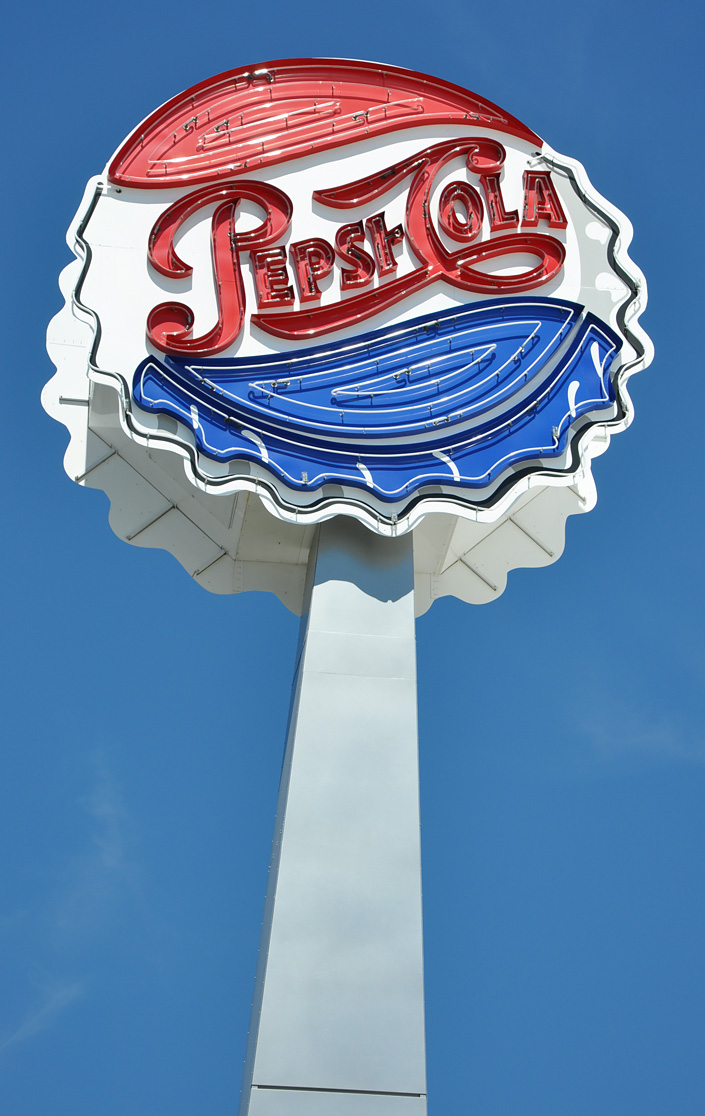 Moving on to Union Gap.  This sign was restored sometime after 2010: 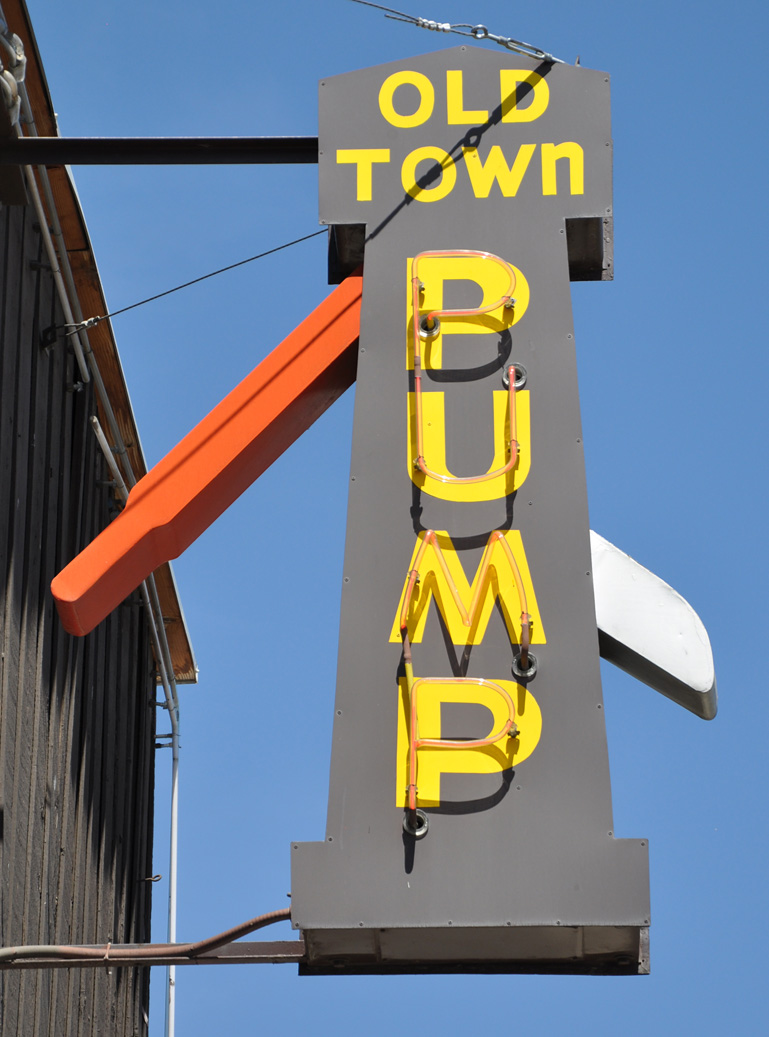 These giant shaved ice Tropical Sno stands used to be all over in Washington, Idaho, Utah — and maybe elsewhere.  Now, they are far and few between.  I believe there are still several in Spokane but I didn’t get to check up on them on this trip since I didn’t make it that far East.   This one is in Richland:

These two signs are also in Richland:

This adapted Norge Ball is also in Richland — at the Uptown Cleaners.  I’ve got a couple of pages of Norge Balls from around the country here:
http://www.roadarch.com/signs/norge.html

This repurposed A&W Drive-in is in Pasco:

At this point in the trip, it was Friday afternoon and I was due back at work on Monday morning.  I was ambitiously still heading north and east to Spokane when Sparkle developed her misfire issue.  So, that changed everything and I turned right around and began my journey home.  Most of Saturday was spent killing time at the Firestone in Kennewick.  But the new plugs & wires resolved nothing and we were bucking through most of Oregon.  Then the symptoms went away and we had a smooth 800+ mile trip home.  Go figure. Saturday night’s goal was to get our butts into California.  Several coffees later, I stopped in Yreka for a four hour nap.  I was thrilled to find two of my favorite signs there still lit even though it was the wee hours of the morning.  This one is is a Federal Electric sectional sign from the early 1900s.  More about these signs at my page here:
http://www.roadarch.com/sca/federal.html

I shot this sign at the beginning of the trip during the day:
https://www.flickr.com/photos/agilitynut/19633606469/

So, that’s it!  I hope you enjoyed tagging along on this trip.  Don’t forget there are still loads of signs & other stuff in addition to these posts over at my Flickr account:
https://www.flickr.com/photos/agilitynut/

I’m going to hunker down for a few months getting all the photos from this trip up at my website.  So, worry not if you don’t hear from me until next year.