I took a little drive to the L.A. area this past weekend to take some photos and attend the Grand Reopening of MONA (the Museum of Neon Art) in Glendale, CA.  I know it’s been awhile since I’ve posted.  Although I haven’t been taking many pictures this winter, I’ve been busy behind the curtain working on the website (RoadsideArchitecture.com).  I finished adding maps throughout my website.  I’m also adding loads of links to things that I haven’t gotten around to shooting yet. So, if you have favorite sections, you might want to check them out so that you can add more stuff to your own to shoot lists.  You’ll find lots of blue boxes full of links all over the place.

On with the show!  Here are some highlights from Saturday.  Sunday will be the next post.  I got around to shooting a Mrs. Chapman’s Angel Food Do-Nuts that’s escaped me until now.  I have three other examples at my website here:
http://www.roadarch.com/sca/donuts.html

This one looked much like the others (yellowish) until last July when it got a makeover for 4th of July which has become permanent:

Next door to this place is a former ice cream stand which became a taqueria between 2008 and 2011.  I’m so glad they kept the cone!  I’m pretty sure from the building design that this was a Dairy Queen:

This Green Forest Car Wash is located south of downtown Los Angeles.  I understand the chain has other locations with dinosaur statues.  I drove by a smaller one somewhere this weekend and noticed one of the dinos had an animatronic neck:

Although the letters are now backlit plastic, at least the great shapes of the sign have been preserved:

Here’s another place that’s been on my list for awhile.  This is a former Famous Amos cookie store in Studio City: 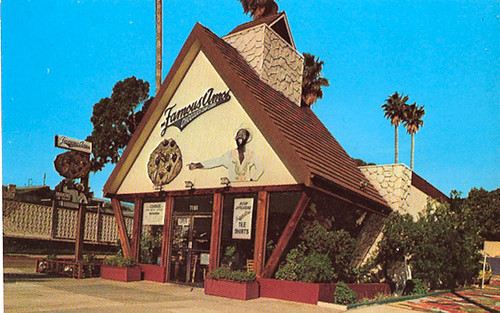 There’s another former Famous Amos location (the first) in Hollywood but it’s pretty boxed up and unrecognizable (Bossa Nova).

Signs.  I know you’re waiting for the signs.  Here’s one that’s basically impossible to shoot since you have to shoot from a distance and it never sees the sun — the Fox Normandie Apartments which is west of downtown L.A.  The sunny side of the sign doesn’t have neon.

This business was south of downtown L.A. — long gone but the sign remains:

This is the original El Cholo restaurant sign from 1931 inside the Santa Monica location:

This beauty is in L.A., just east of Beverly Hills:

It is accompanied by this nice A-frame:

These two are on the same building — also in L.A., just south of West Hollywood.  The businesses are long gone.  The sign on the right which has, unfortunately, been messed with originally advertised for the Spanish Kitchen:

Now, on to the day’s main event:  MONA’s big Glendale debut.  Yes, that’s a replica diver on the roof and a replica of the Clayton Plumbers sign on the right — both which, I think I’ve covered at this blog before.  If you want more info, I cover the diver sign at my website here:
http://www.roadarch.com/signs/ca.html

Inside, you’ll be greeted by the former Green Frog Market sign from Bakersfield.  The double-sided sign is animated.  The frog tips his hat and the text flashes between “Howdy” and “Folks”.
http://www.roadarch.com/sca/extension2.html#Howdy

This camera sign was originally located in the Little Toyko neighborhood in downtown L.A.:

While there were several vintage signs on display, the focus of this opening exhibit was on modern, sculptural neon from many different artists:

I’ll be back on Saturday with a Part 2 post with some more goodies from L.A.  In the meantime, I have also posted some other photos at Flickr from this day’s shooting:
https://www.flickr.com/photos/agilitynut/