Day 5 was the suckiest day of the trip.  No sun whatsoever and then the check engine light came on in the afternoon.  A pricey catalytic converter that had to be California approved had to be located and installed.  $1610 later and I was finally back on the road around noon on Day 6.

I finished up Portland for most of the day and then headed west a little.  Then moved on to Vancouver, WA.  I don’t know what the delay was — but what should normally take about 30 mins., took FIVE HOURS!  No sign of an accident or construction.  5 mph stop and go all the way on the interstate.  It was hell.  And, of course, it was sunny.  Have I been complaining too much on this trip?  It’s a miracle I’m getting lots of lovely shots despite all the headaches.

Let’s start out with some Portland stuff.  The Paris Theatre is a tremendous old relic.  I’ll miss its current look if it’s ever restored:

I never did get to sample the goodies at Voodoo Donuts on this trip.  It wasn’t such a big deal when I was here in 2008.  But this time, the lines were more than 100 people deep both day and night.  But I did at least shoot the giant donut on the ceiling inside:

On the bridge crossing over from Portland to Vancouver, I pulled off to shoot the former Waddle’s Coffee Shop sign which has been adapted for a Hooters:
http://www.uniquely-portland-oregon.com/waddles-restaurant.html 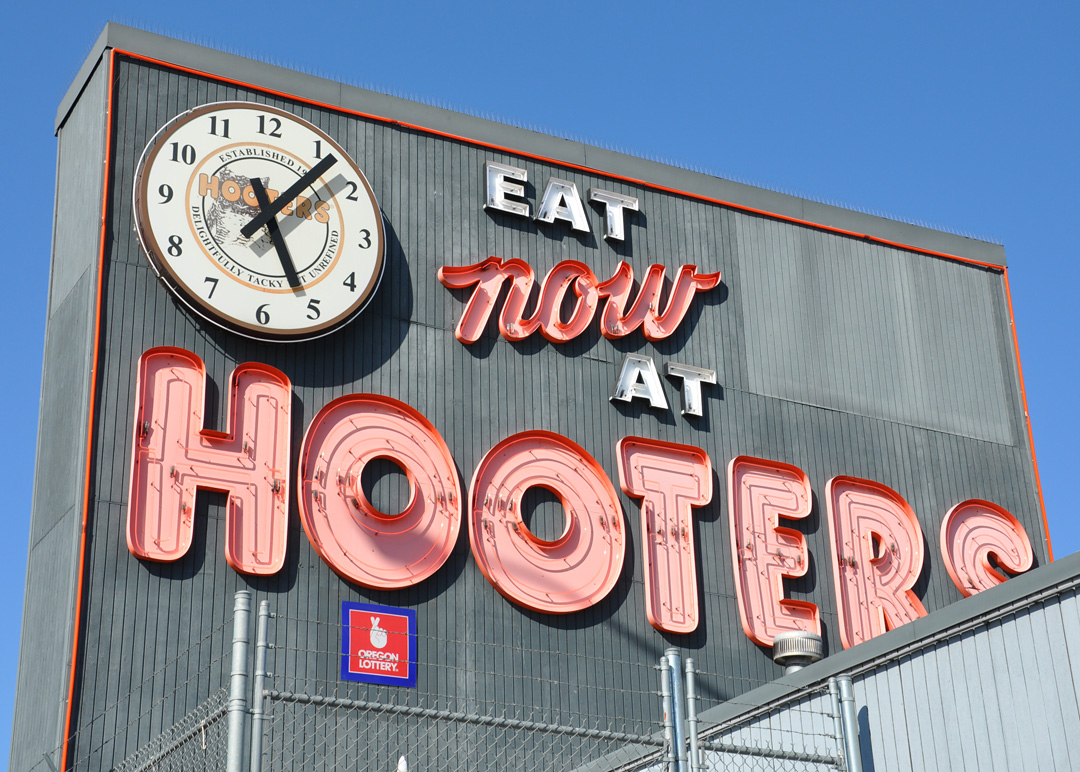 While I was away from the torturous bridge traffic, I also shot this place.  It only added about an hour to get back up the on-ramp to the bridge.  Be glad you weren’t there!

You can see the building better from the bridge but there was chain link fencing in the way.  Here’s some more about the building — originally the Totem Pole Marina built in 1960:

And this view from Bing gives you a better idea of what the roof looks like:
http://binged.it/1OwAkT1

Moving on to Washington — this place is in Camas.  Nice mid-century modern siding behind the cute sign:

The EAT letters from the sign are now installed on the ceiling inside the Panera which replaced the building. 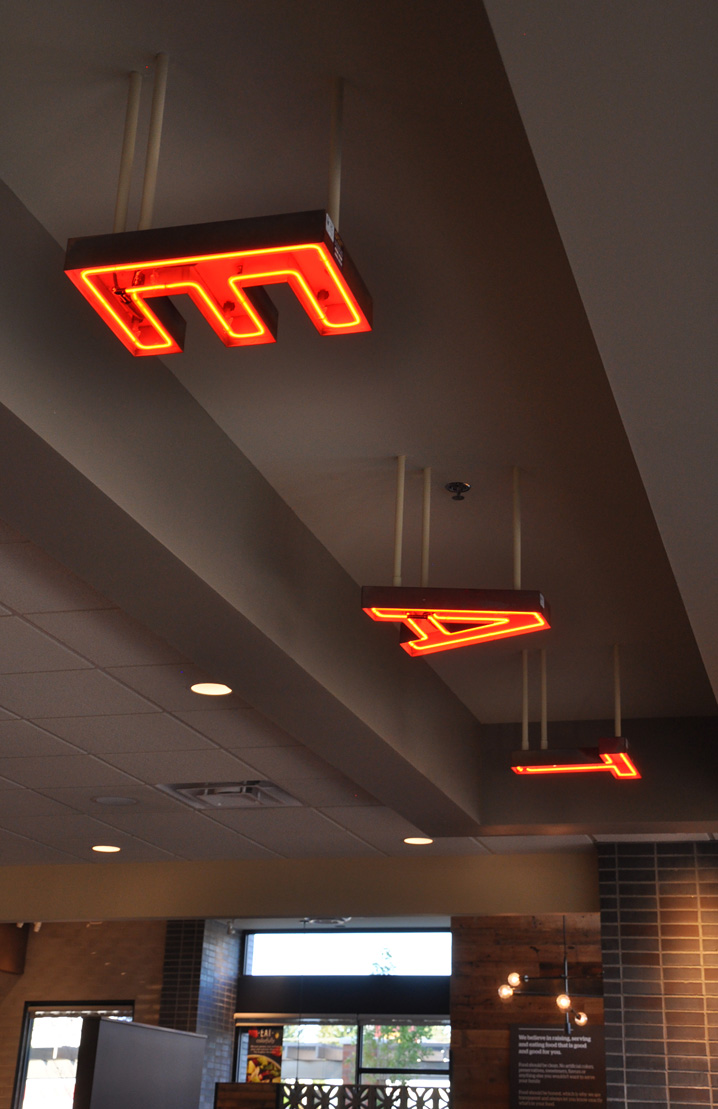 It’s hard to miss these guys in Vancouver from either I-5 or Highway 99:

Moving on to Longview, WA — lots off fun neon to shoot at night there.  Not all the plastic balls were lit on this one but it’s still a happy sight: 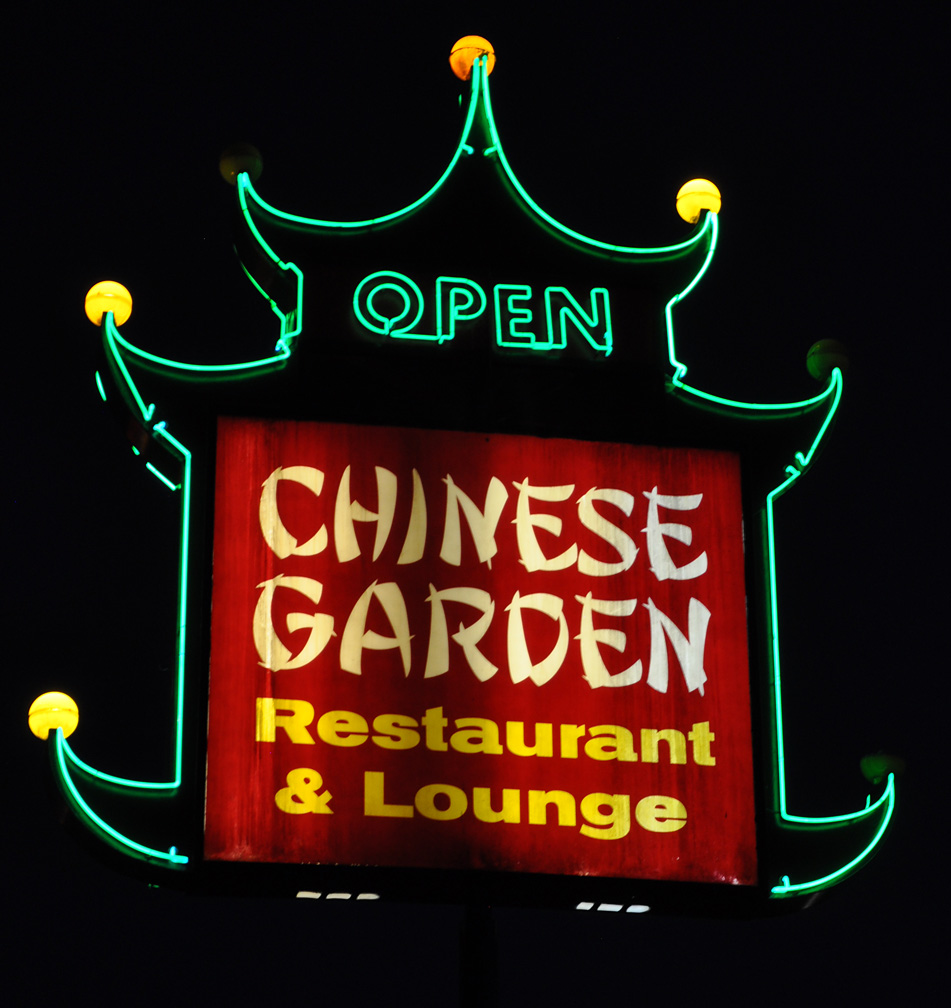 Here’s the sign by day which I shot the following morning:

As you might have guessed from the amount of blog posts that I’m cranking out today, the weather sucks.  About five minutes of teasing sun this morning, then gone.  Gonna be an all-dayer at Starbucks I’m afraid.  But all the forecasts are for 100% sun tomorrow.  Holding my breath!