Finally — here’s the post for Sunday’s adventures.  Life — and work — got in the way.

Let’s start off in Manteca with what appears to be a former Best Western Motel sign.  The crown sign is above the plastic sign for the Taqueria Nayarit.  It would seem the sign has always been here from the motel-looking buildings behind the restaurant.  Here’s what the sign would have looked like originally before the bulbs were removed and it was repainted:
http://www.agilitynut.com/12/5/spbw.jpg

Back to Stockton for some more shooting.  This was originally the Stockton Motor Lodge:
https://www.flickr.com/photos/edge_and_corner_wear/10061094455/

The sign’s been altered a bit but the building still has the original colors and rocks:

In the heart of downtown.  Black vitrolite glass tile facade and a neon sign.  I’m betting the window design was a little more glamorous originally: 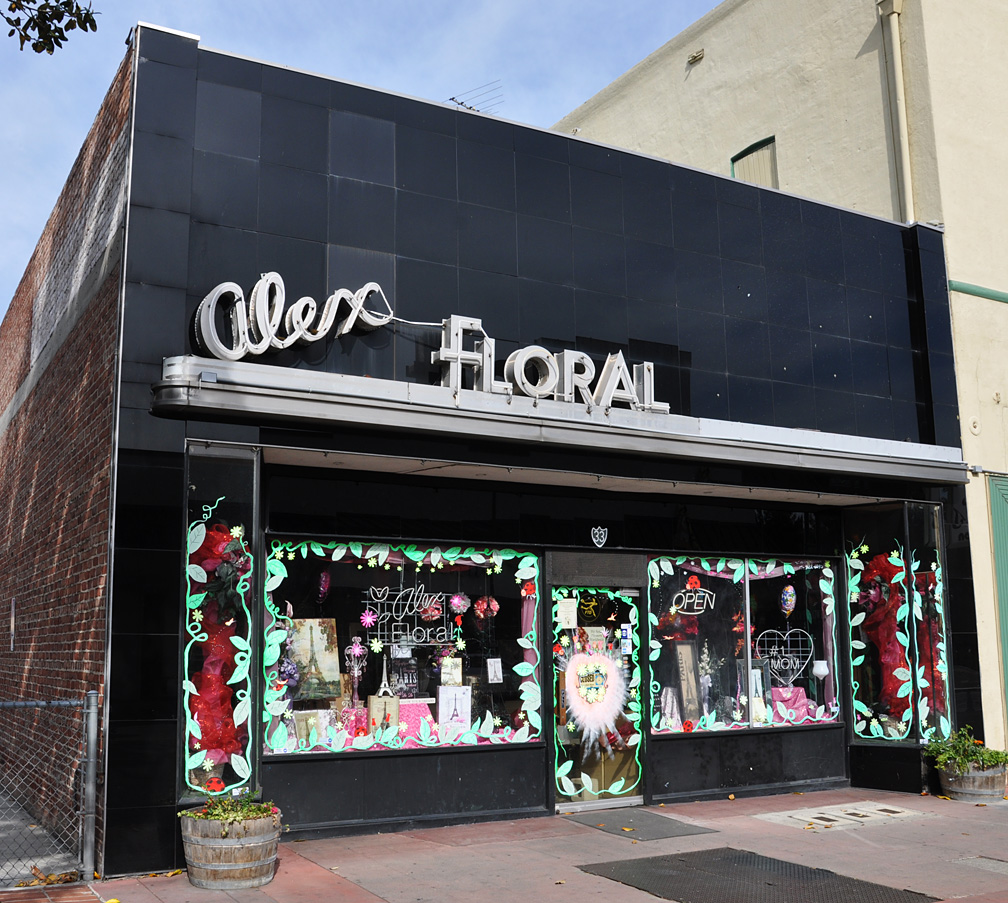 From another flower shop downtown:

This sign is at the attached cocktail lounge of the Americana Inn:

This sign was previously painted a rusty-brown.  I’m betting it was a brown wood grain paint job originally:

And on to Sacramento.  This sign is perched above what is now Sim’s Diner:

A funky building and sign.  I’ll shoot just about any donut sign.  If you’re crazy about them, too, I have a big section about them at my website here:
http://www.agilitynut.com/sca/donuts.html

The woman in the window ducked down when I raised my camera: 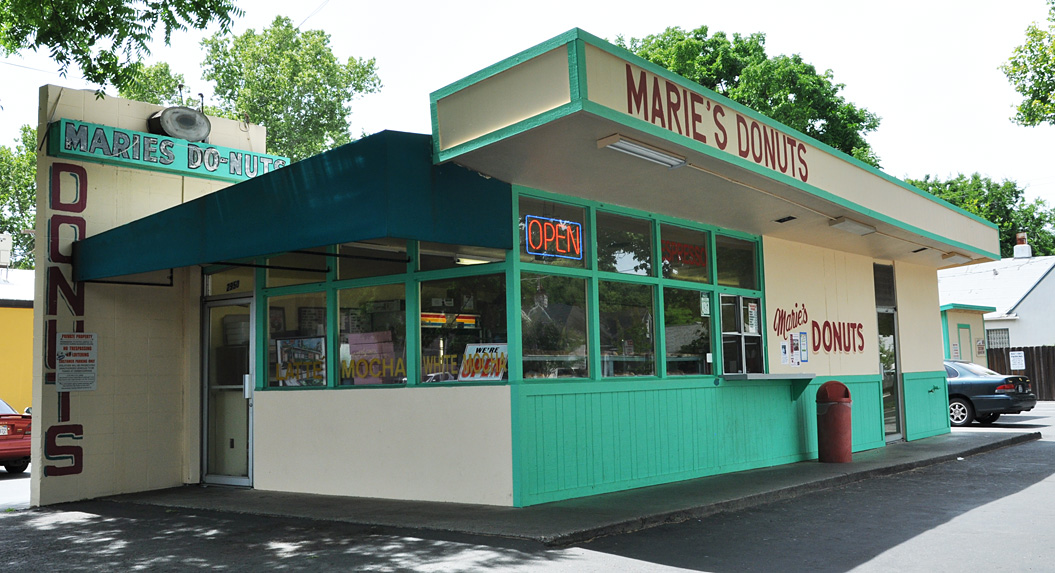 I was saddened to discover that the Orange Freeze, established in 1946,  has now become a fried chicken place.  At least the building is still there.   Here’s my photo of the place from 2008:

This Fox & Goose sculpture is installed in front of the Fox & Goose Public House (pub style bar & restaurant).  It was created by Dick Ratcliff and installed here around 2011.

I tried to use this as a photo-opportunity with the dogs but the sun wasn’t helpful and the bronze was hot.  Fix, the light brown striped dog, is now more than 14 years old.  She is SO over these photo-taking sessions and would clearly rather be napping: 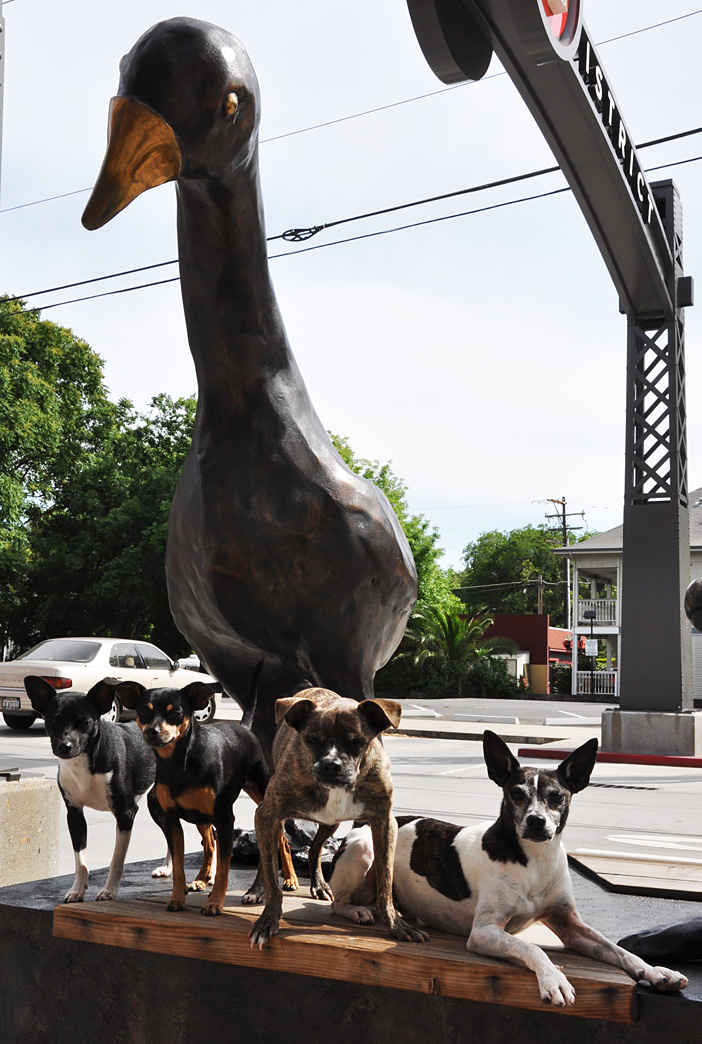 The Capitol Bowl in West Sacramento got rid of its nice neon sign a few years ago.  I believe it was due to pressure from the city to get rid of “unsightly” signs during a big redevelopment push:
https://www.flickr.com/photos/tspauld/25557965/

The building at that time was fairly drab but it had a little neon as well:
https://www.flickr.com/photos/tspauld/47523220/

But I guess the city approved of this new design — with neon letters and a giant pin.  I guess vintage is ugly — but retro is fine?  I really don’t get it.  Depressing.

But let’s move on — to Walnut Grove: 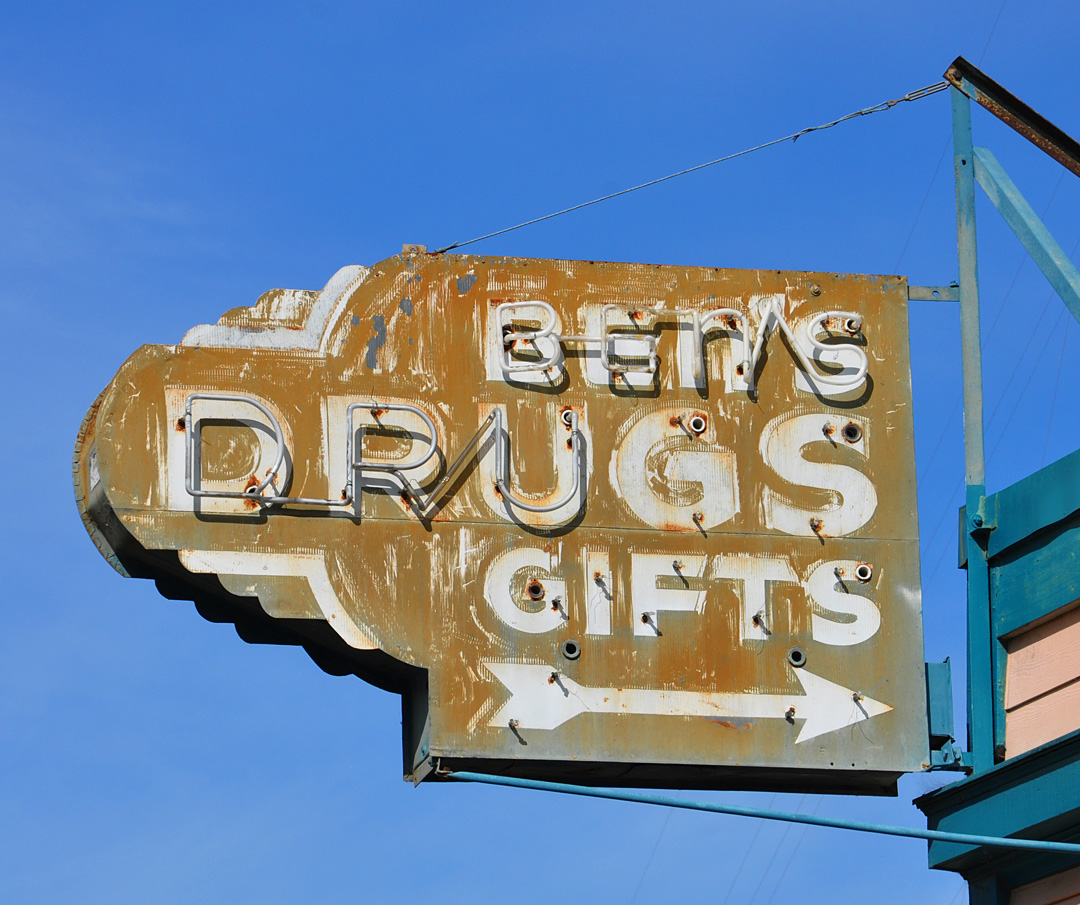 And one last shot from a gas-up on the way home at a Sinclair station in Lodi.  You don’t see many Sinclair stations OR Sinclair dinosaurs in California.  In fact, the only dinosaur that I can think of is at a shoe store in San Francisco.  Photos & info about these statues at my website here:
http://www.agilitynut.com/dinos/sinclair.html

The next mini roadtrip will be Memorial Day weekend when the dogs and I will be heading to Vegas.  In the meantime, don’t forget about the sampling of photos I’ve posted over at Flickr:

And if you haven’t been to my website in a while, you might want to pay a visit to see the tons of stuff to the various California sections (and throughout the other sections which aren’t broken down by state) in the past year and a half.