OK — time to play catch-up!  Normally, I post to this blog when I’m on the road.  But this time, I was busy Saturday night getting lots of neon-at-night shots.  After cropping and tweaking, just as I was ready to post after midnight, my internet connection got glitchy.  I took it as a cue to get some rest.  Just as well — Sunday was a killer.  I got loads of shooting in.  After wrapping up the Stockton area, I moved on to Sacramento and got half of that list done.  Then it was time for the five hour drive home.  Ugh.  So, I’ll get this post in now and, hopefully, the other one later tonight or tomorrow.

I started the day in Exeter.  I’ve shot other Frosty King locations in Central California — but none of them have had this male-symbol sign.

Just a few years ago, the place had a cuter metal walk-up canopy:
https://www.flickr.com/photos/jessiekeller/5008755821/

This is a little more modern & drab — but spotless and probably draws in more customers:

On to Fresno for a few more things that I needed to reshoot in better light.  Here was a sign I never noticed before.   A tree forced this arty shot.  Note the two-part animated neon arrow on the left.  It was lit in 2008 but I don’t know if it still is these days:
https://www.flickr.com/photos/tspauld/406510213/ 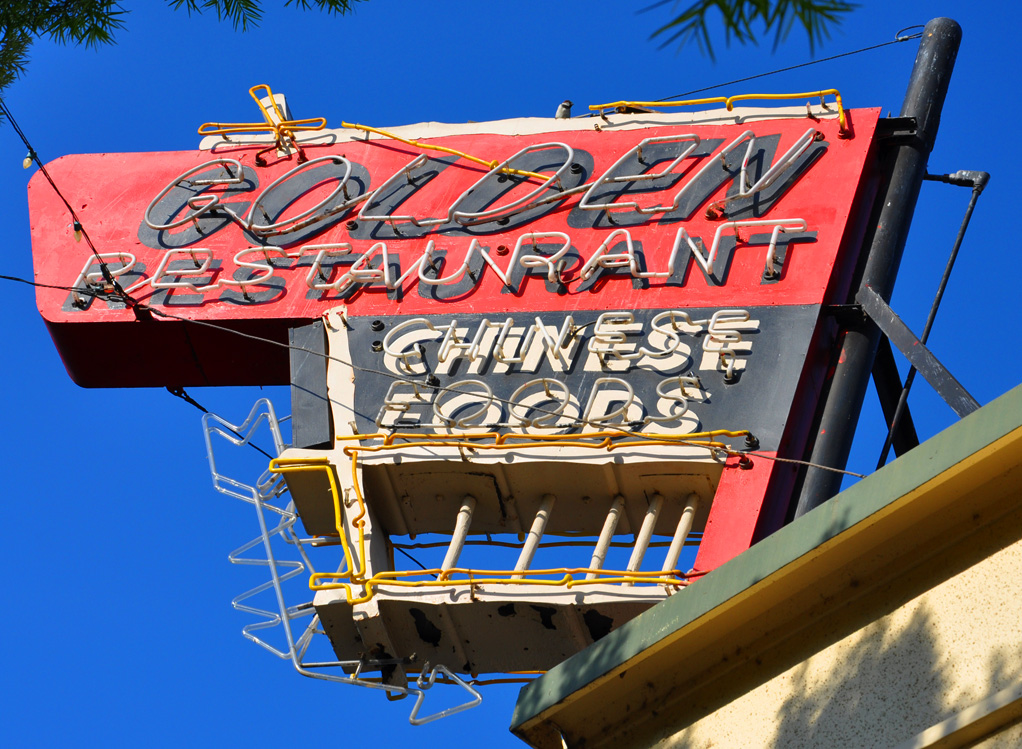 Another Fresno sign that I’d not seen before.  I assumed that this was an adapted sign.  But now I’m not so sure.  From poking around on-line, I found that Jensen & Pilegard, which has been around since 1937, promoted their business as a seeds & feeds place.  So, the neon chicken might make sense: 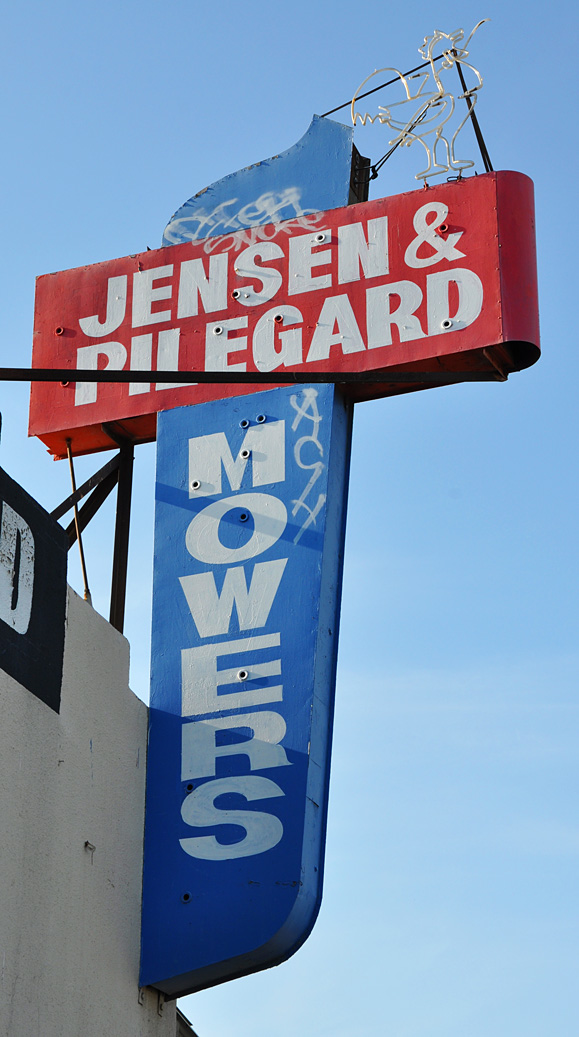 A quick “hi” from two of my companions.  Grem had a busy morning chasing two cats  — much to my chagrin.  Nik is her ever tolerant bean bag chair:

There are hundreds, if not thousands, of repurposed Winchell’s Donut House signs here in California.  However, I don’t think I’ve ever seen one of the buildings with this roof feature intact.  I believe this puts it at early 1970s.  I think the color scheme has always been this perky yellow: 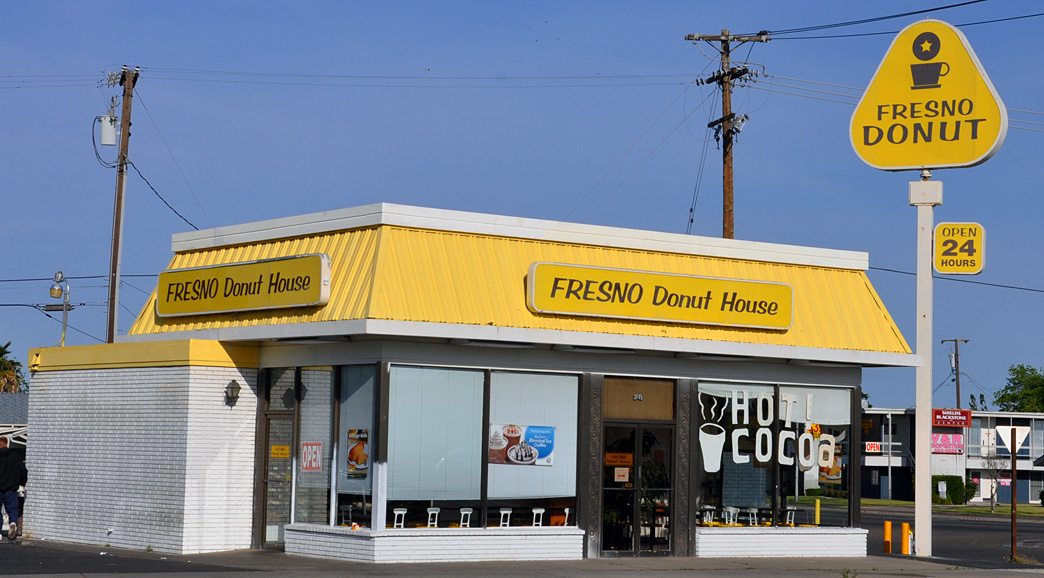 On to Turlock.  This is now a furniture store but the sign has apparently been moved around to the side of the building: 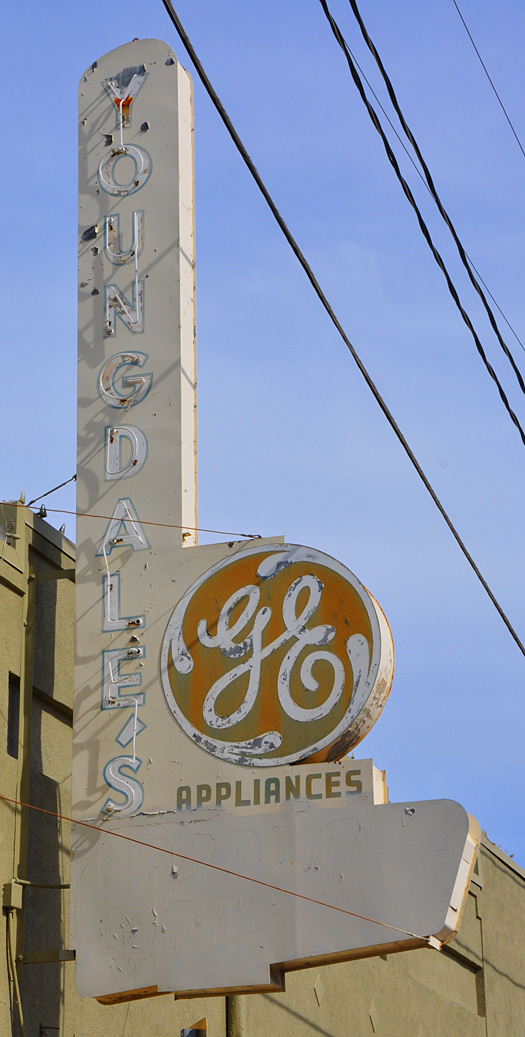 From Oakdale.  This sign at Gillman’s Frosties sure seems like it would scare away the customers rather than entice them!  I guess those striations on the burger are meant to represent steam?

Also in Oakdale — the H-B Saloon which is next door to the Cowboy Museum.  I assume these letters are meant to represent a “H-Bar-B” cattle brand.  Whether that was a fictitious name or a real one, I don’t know.

Up into the hills for a bit — this one from San Andreas:

From Plymouth — land of many vineyards.  This Doggie Diner head is at the Vino Noceto Winery.  It’s been there for years and was refurbished about a year and a half ago.  I wanted to get some shots of the kids with him.  But I was a bit hesitant after the cat-chasing escapade earlier in the day.  During a nice little park run, Grem & Griz took off after a couple of cats and disappeared out of sight.  Griz (dog #1 on left) came back pretty much right away.  But Grem (dog #2) was missing about 5 long minutes and came back with a short-lived limp.  Also, during my posing for this photo, there were elegantly dressed wine & cheese tasters less than 20 feet away and I didn’t want things to go awry.  So, I left the leashes on and made it quick.

Photos & info about these Doggie Diner signs/heads at the bottom of my webpage here:
http://www.agilitynut.com/critters/dogs2.html

On to Lodi — this classy Art Deco number is from the former Imperial Hotel: 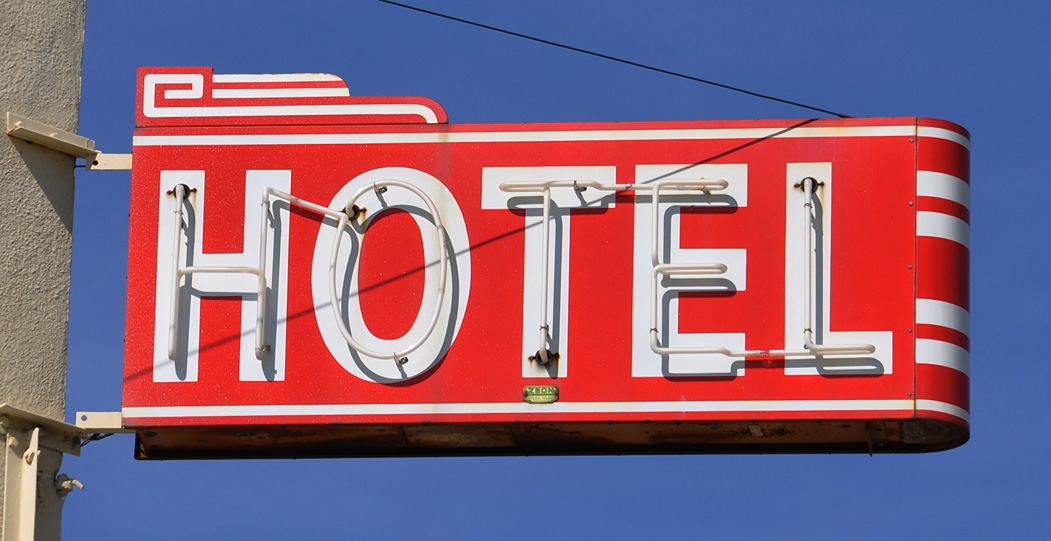 And now on to Stockton for the remainder of this post.  This pair of signs are at the same location:

The Hotel Fair is not the kind of hotel that you’d want to stay at.  Apparently, low income housing.  Downtown Stockton is pretty rough — but I’m quite comfortable in the worst of places.  That’s where the good stuff is that hasn’t been overrun with new businesses and development:

The Lincoln Center shopping center sign (yes, the Lincoln Highway runs through Stockton).  I took a quickie video of this sign so that you can see the revolving sign.  It has neon on this side and scintillating bulbs on the other side.  Here’s my Flickr photo of the bulb side with the YouTube video link on the right:
https://www.flickr.com/photos/agilitynut/14122078073/

Okay, that’s a wrap for right now.  Don’t forget some of my other photos at Flickr from Saturday:
https://www.flickr.com/photos/agilitynut/

I’ll start working on Sunday’s photos tonight and hopefully get that post up real soon.