Another eyeball appointment for Sputnik in Culver City — another excuse to go picture-taking.  Nik’s eyes have nice low pressure — but he has injured his blind eye somehow.  Easy enough for such a nutso, hyperactive, nearly blind dog to do.  So, the vet wants us back in a month — which means you’ll be hearing from me again soon enough.

Before we move on to today’s festivities… some good news for those of you into Roto-Spheres.  For those of you that don’t know what they are, I have the full story & photos of all of them here:
http://www.agilitynut.com/sca/roto.html

The good news is that Dutler’s Bowl in Mankato, MN is starting a fund-raising project to get their sign spinning again.  The woman who owns the place was nice enough to send me a t-shirt.  I’m sure you could call them up and order one for yourself if you like — and support the noble cause: 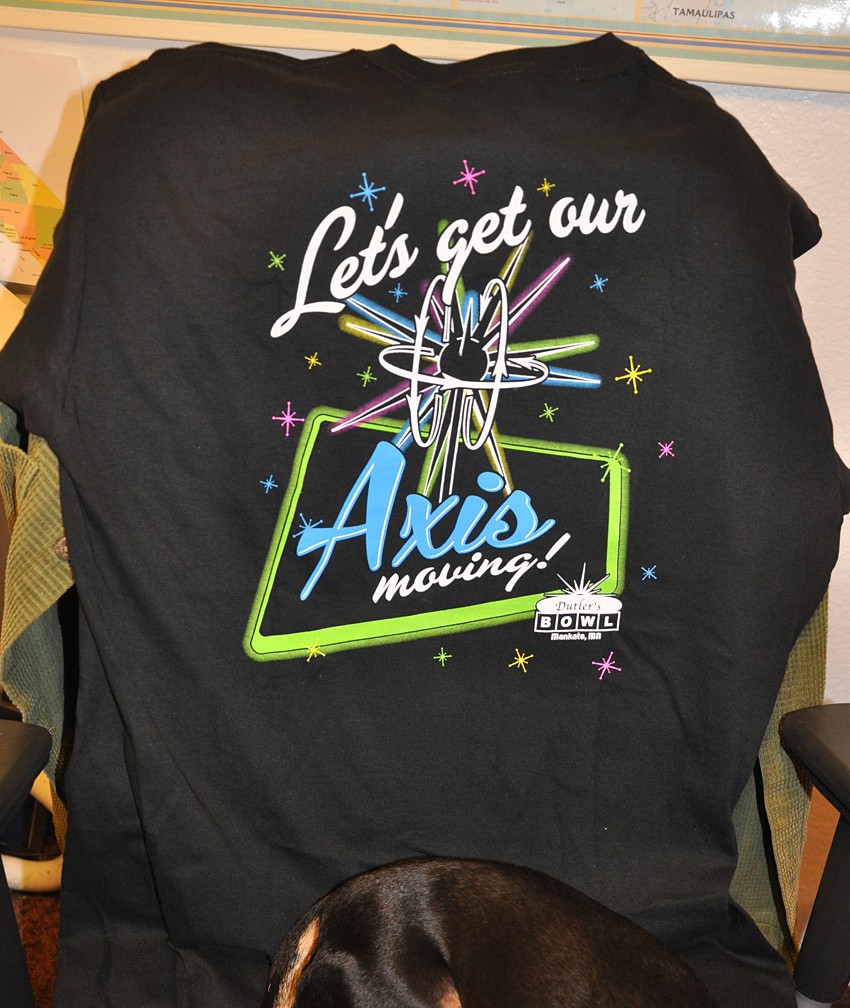 The neon on the Dutler’s Bowl Roto-Sphere has been working since 2007.  But it hasn’t spun since 1980.  What’s interesting about this sign is that the band around the center of the sphere isn’t like the others — it doesn’t have that groove around the center.  This might mean it never counter-rotated originally but only spun in one direction on the pole.  I’ve put the owner in touch with my buddies in Shreveport who can hopefully help get this one fully functioning.  In other news…  the Jarrell Company in Dallas is also planning on getting their rusty Roto-Sphere restored & spinning again.

Now, on to today’s goodies.

From Carson — this “Four Heel Drive” truck appeared in the 1994 “Flintstones” movie.  I think it’s back up for sale now since it was on the lot of an auction house.  More photos of the car here (warning: turn your volume off):
http://www.youtube.com/watch?v=DPLyEJeRfCY 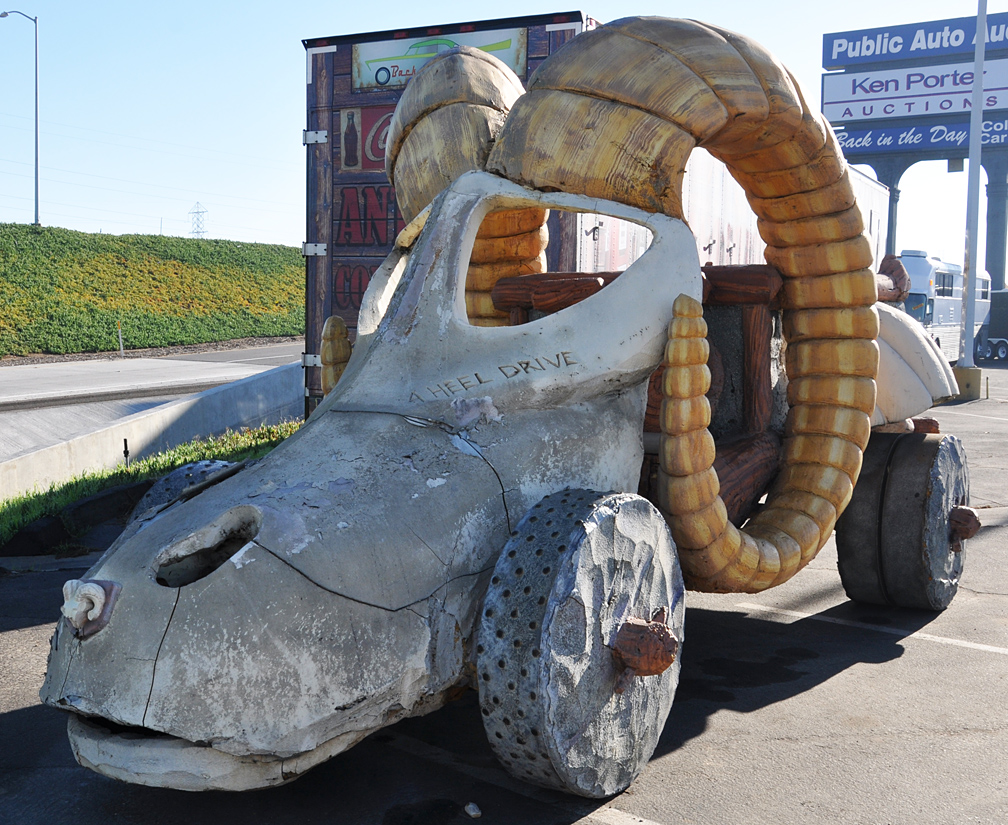 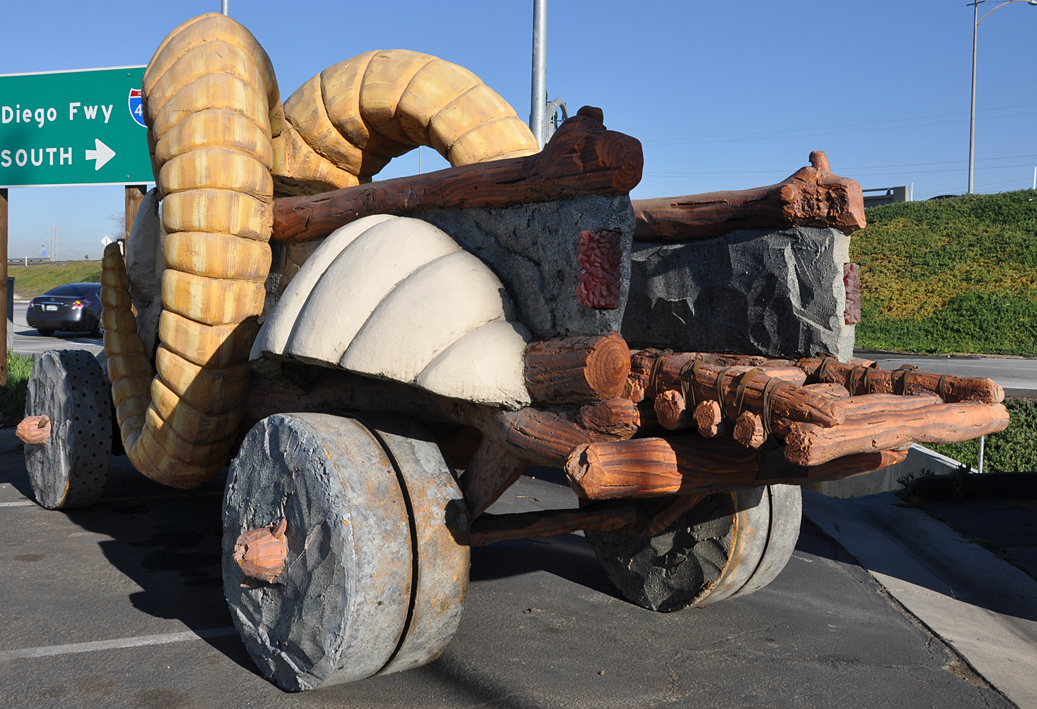 I’ve posted this Giant Head from a hair salon in Redondo Beach at my blog before.  But I thought you might want to see it again with its winter wardrobe.   It was 67 in Redondo Beach today… 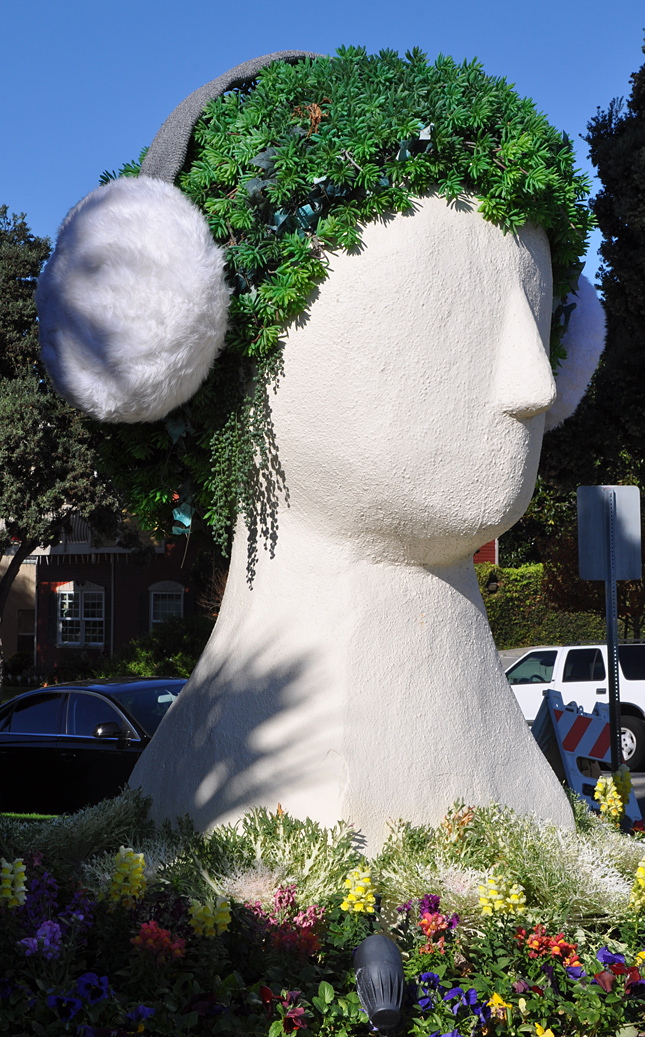 Also in Redondo Beach.  From pies to pancakes — a former House of Pies, now an Original Pancake House.    Here’s a vintage photo that shows what the building would have looked like originally:
http://www.flickr.com/photos/elmwoodparklocalhistory/ 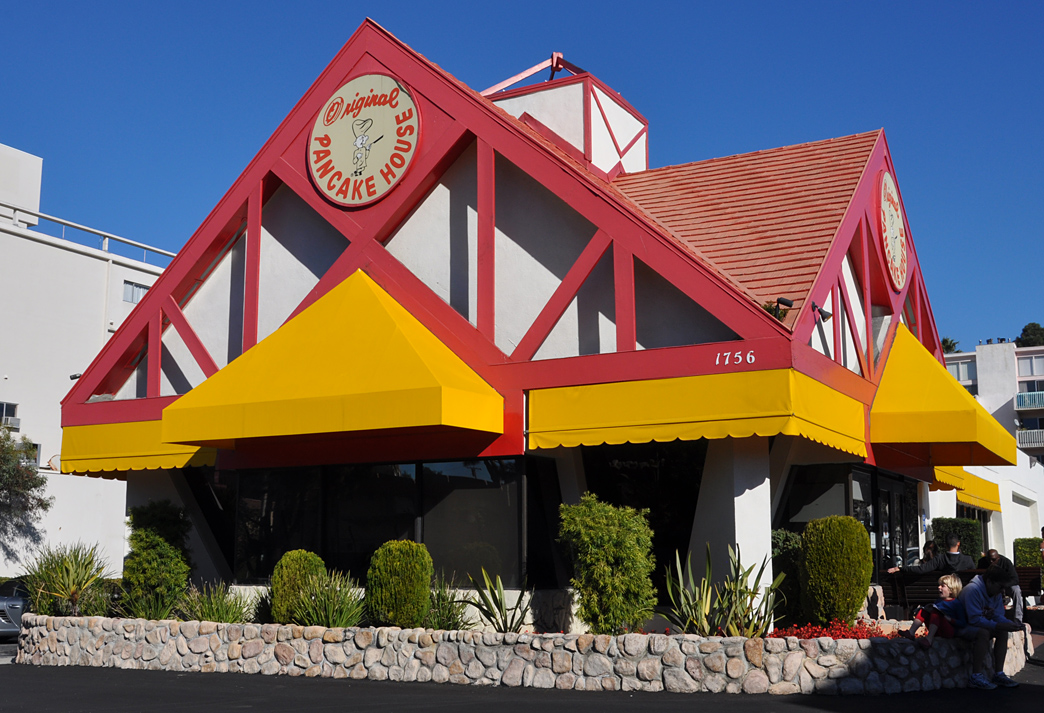 A big ‘un from Torrance: 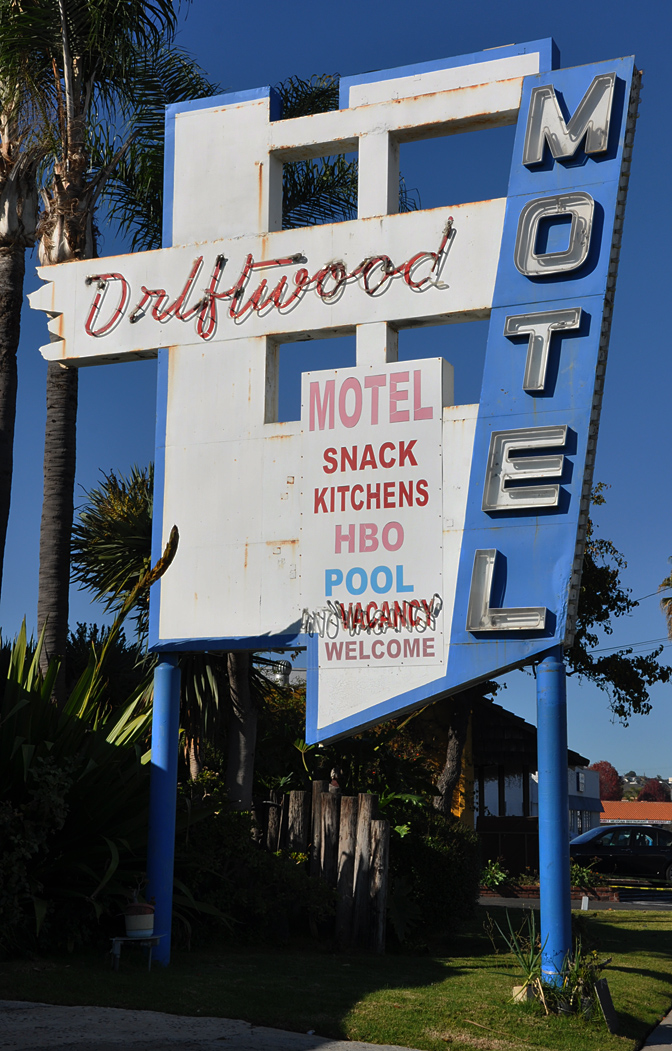 Two Angel Food Donuts locations in Long Beach.  OK, so not as big as the stucco Randy’s Donuts — but still wonderful.  A whole section about giant donuts and donut signs at my website starting here:
http://www.agilitynut.com/sca/donuts.html 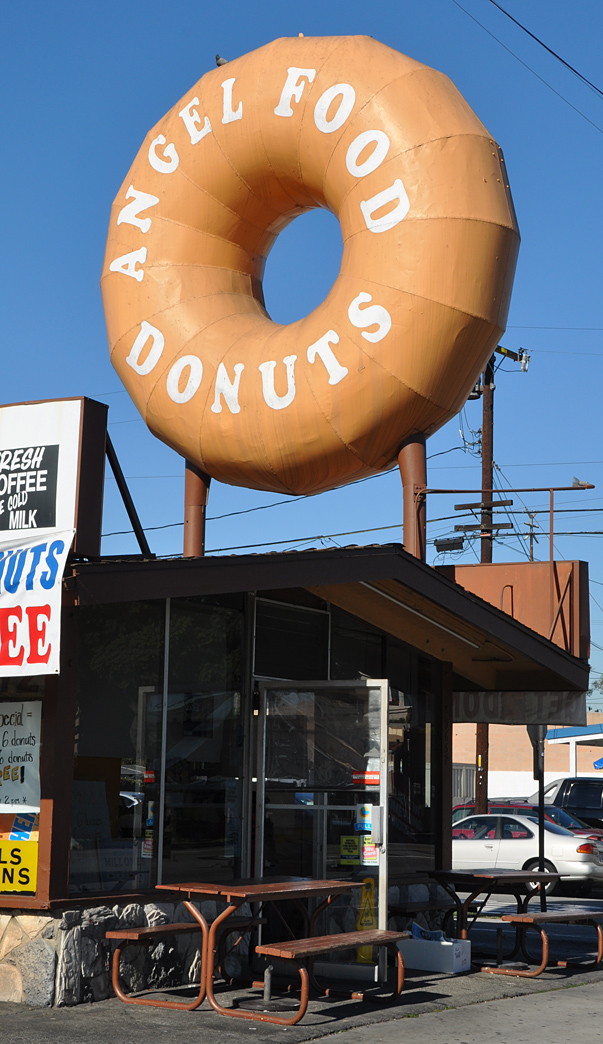 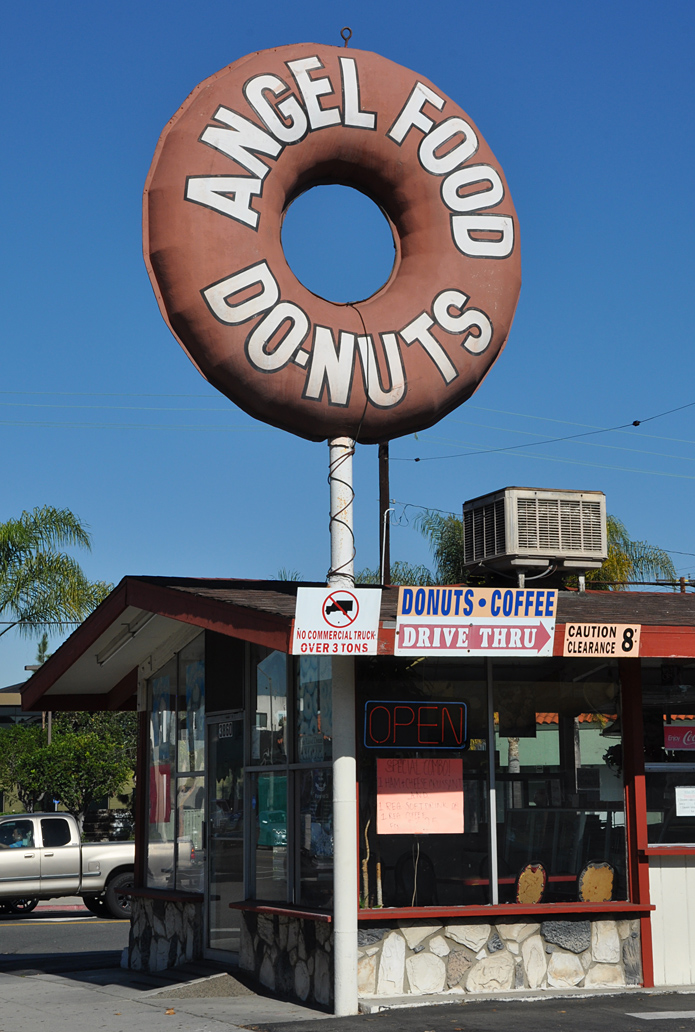 More Long Beach.  This camera shop was established in 1946 — and is still open! 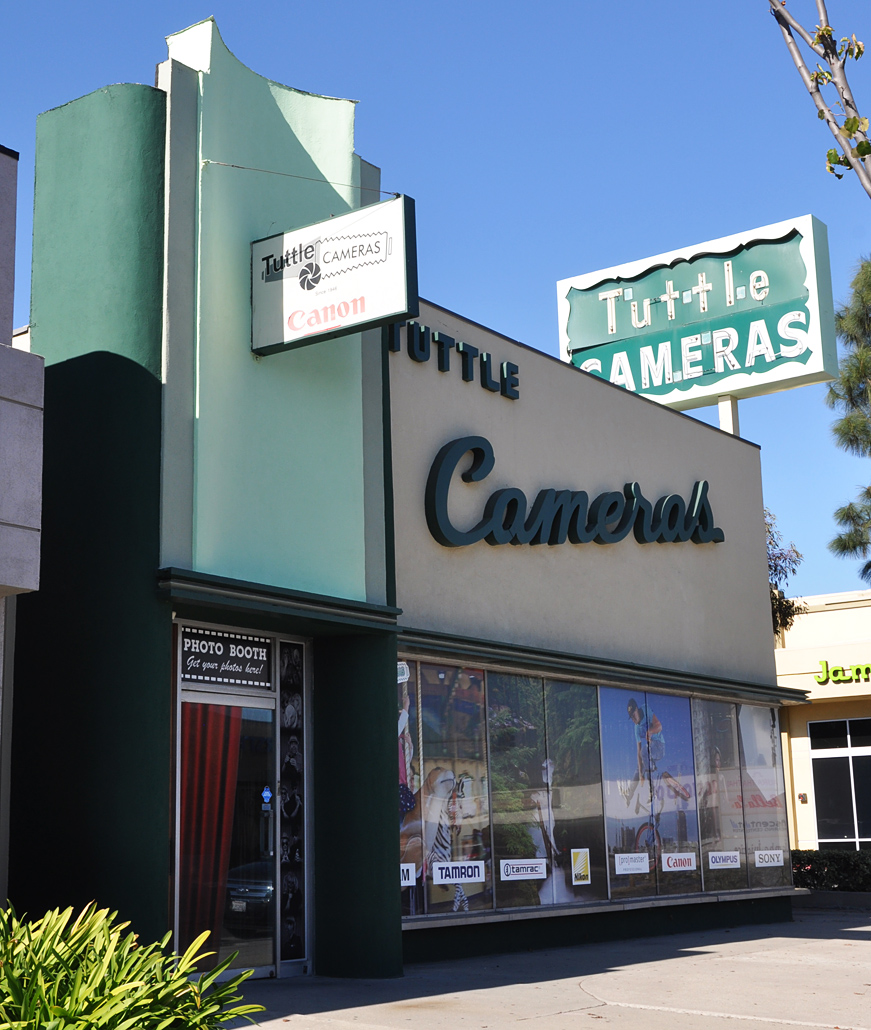 This red sputnik is installed on top of the Best Auto Parts & Repair sign.  Note the different lengths of bulbs.  This was frequently done with these signs.  More examples of them at this page:
http://www.agilitynut.com/sca/roto3.html 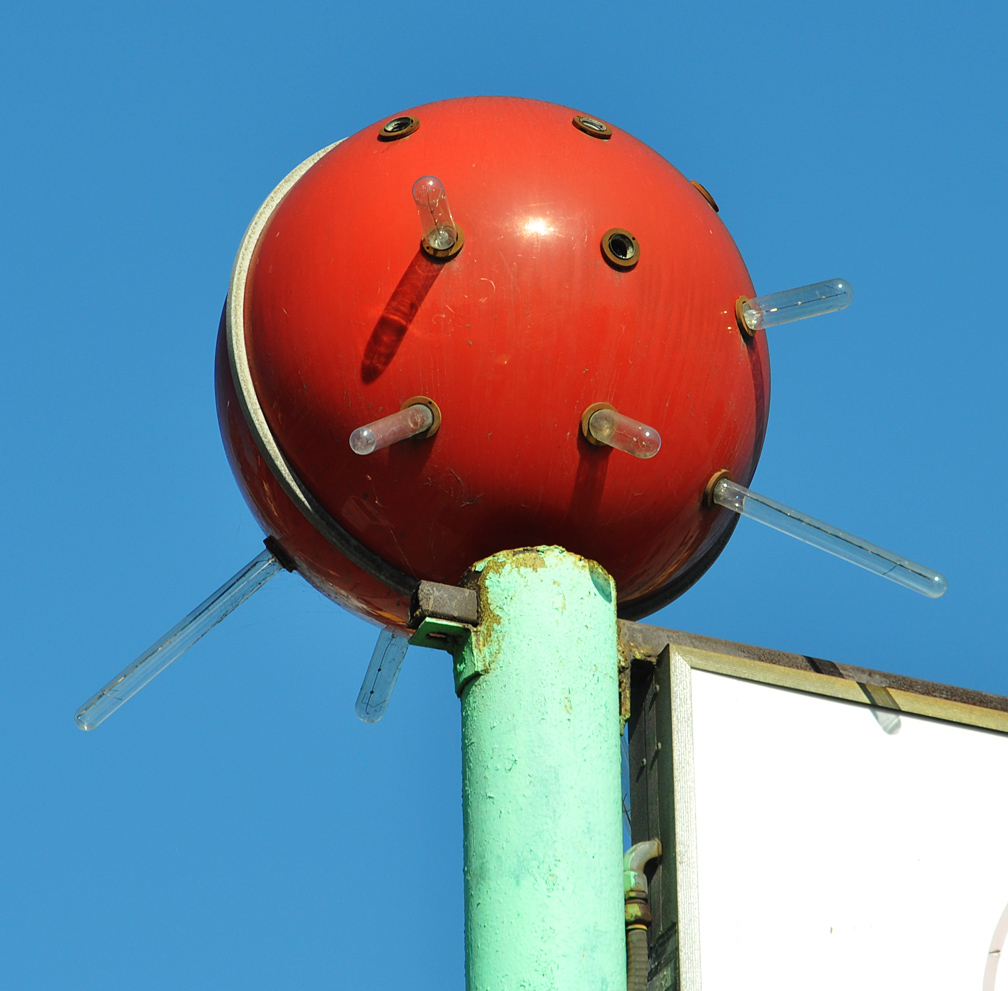 A random shot of concrete screen & man-modified nature.  Note the lava rock at the bottom and the old-fangled antenna on the roof: 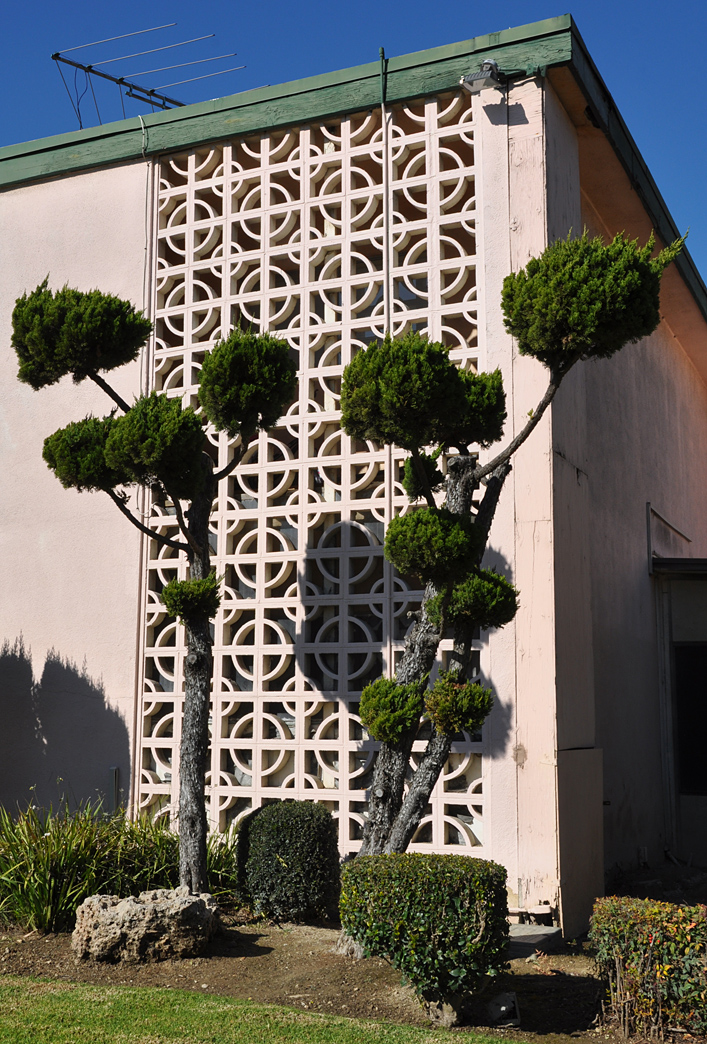 Holiday cheers from Long Beach!   A good time to remind you that all my photos are clickable — clicking on them makes them larger.  Long Beach is loaded with Art Deco & Streamline Moderne since most of the city was leveled in the 1933 earthquake and rebuilt: 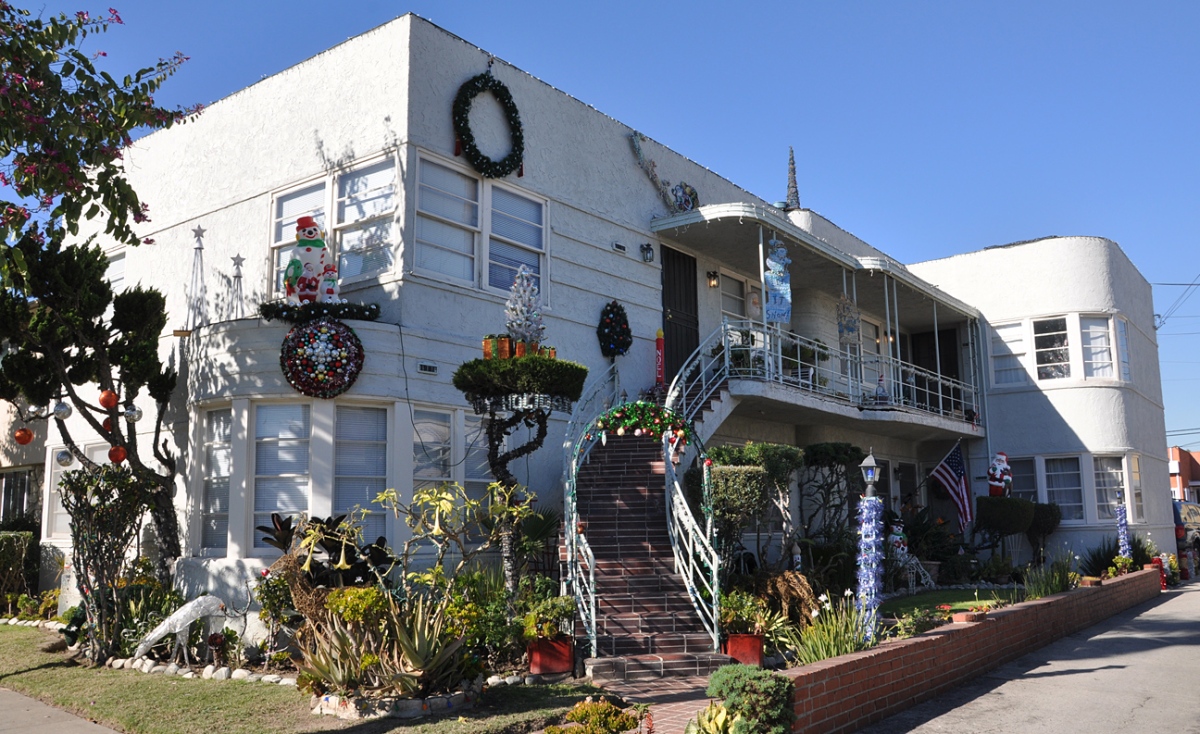 Blue on blue.  My apologies to my pals in the Northeast that are dealing with snow and ice right now. 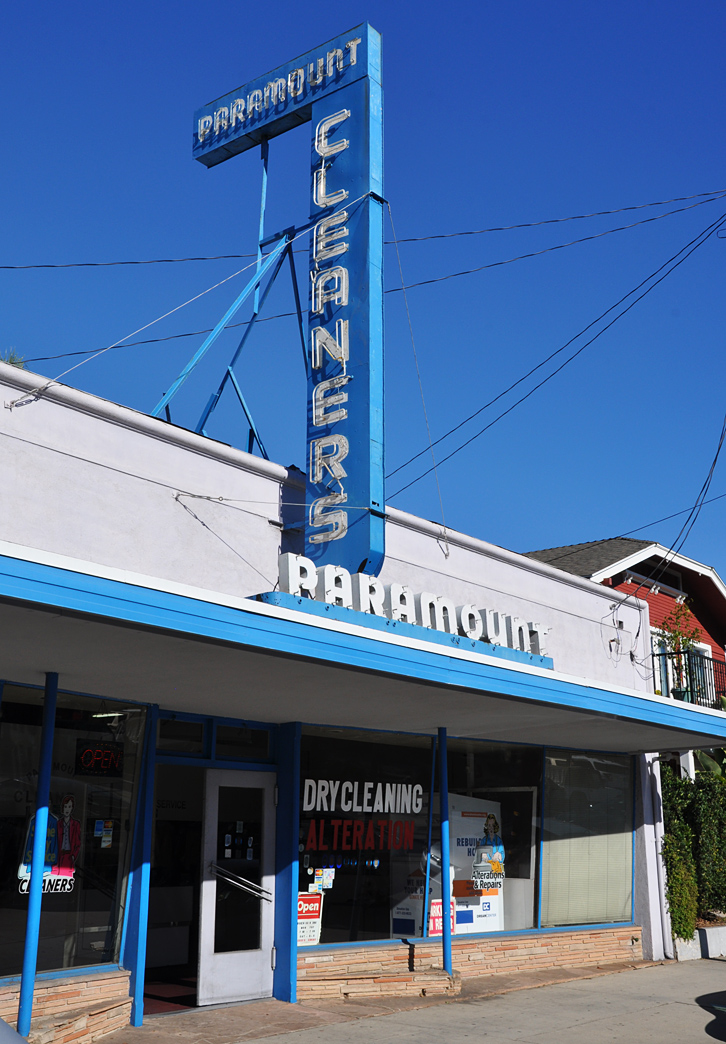 From the Long Beach Airport.  This is actually on the tile floor, rotated 90 degrees for you: 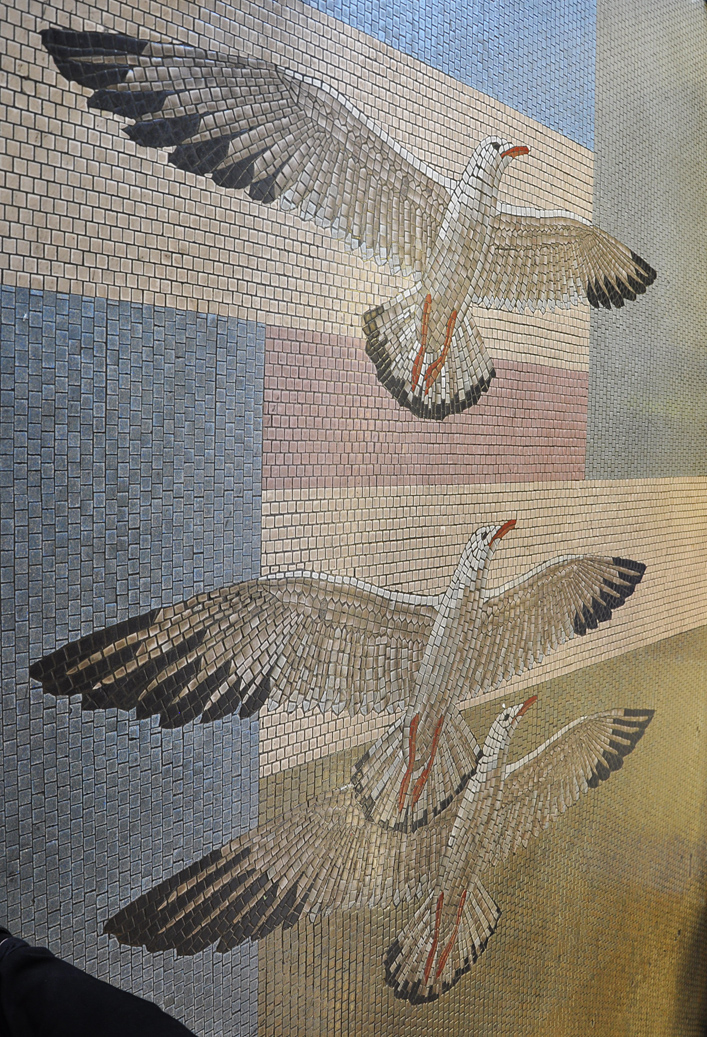 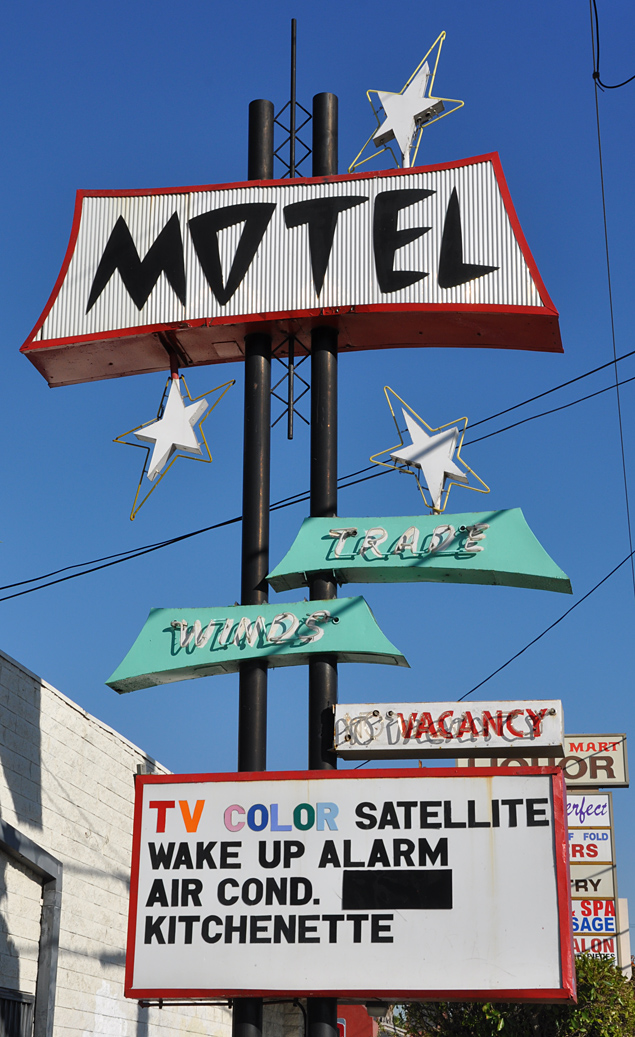 A double drive-thru dairy store in Lakewood.  I believe this is a former Alta Dena dairy store: 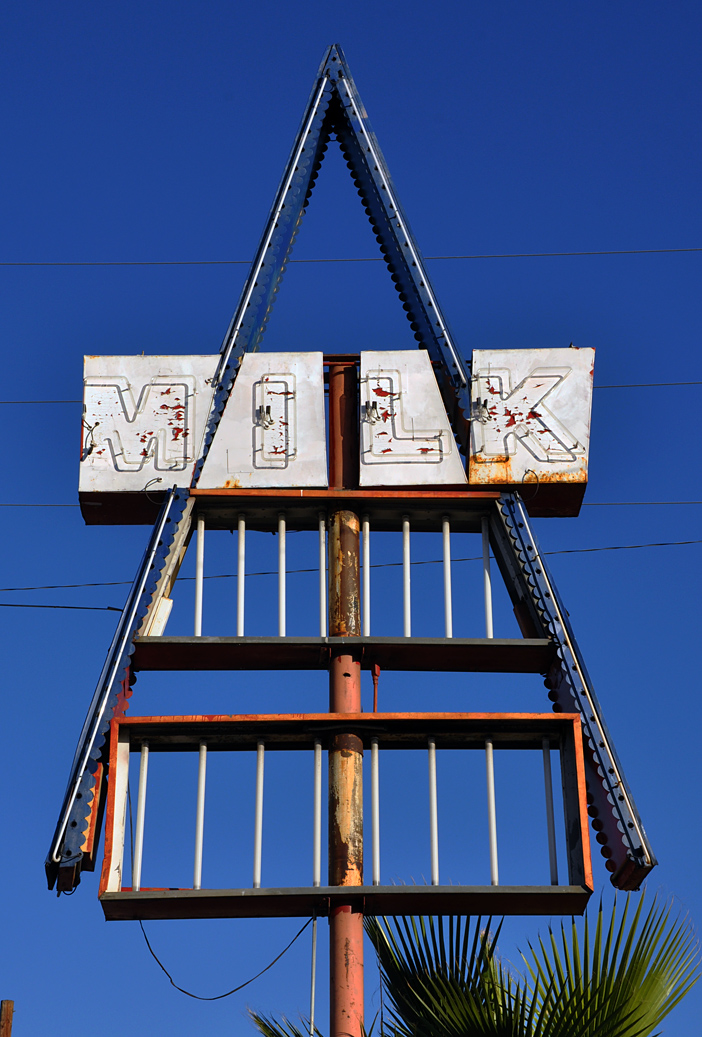 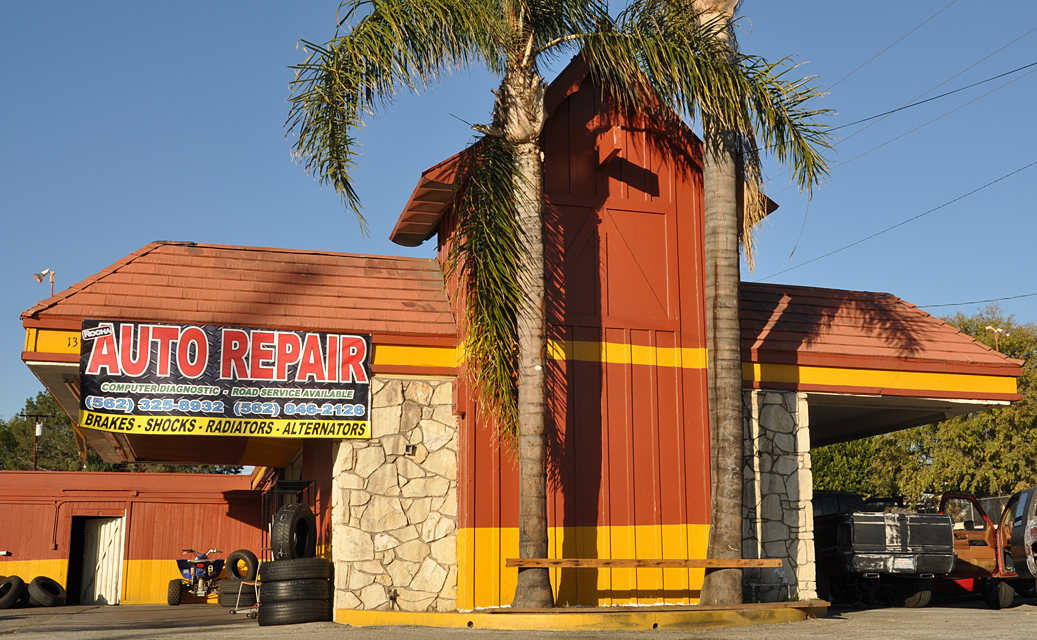 I am deliberating about adding a Dairy Store sub-section to the mid-century modern section at my website.  There are so many of these Alta Denas still around here in SoCal — and then there are more of chains in Florida, Indiana, etc.  There could even be a book in it  — send those publishers my way — I’m ready!

Last photo for the night – also from La Mirada.  The Imperial Telegraph Hand Wash.  Don’t you love that towering sign and all those faux gas lamps?  The lamps continue on down the canopy on the left as well. 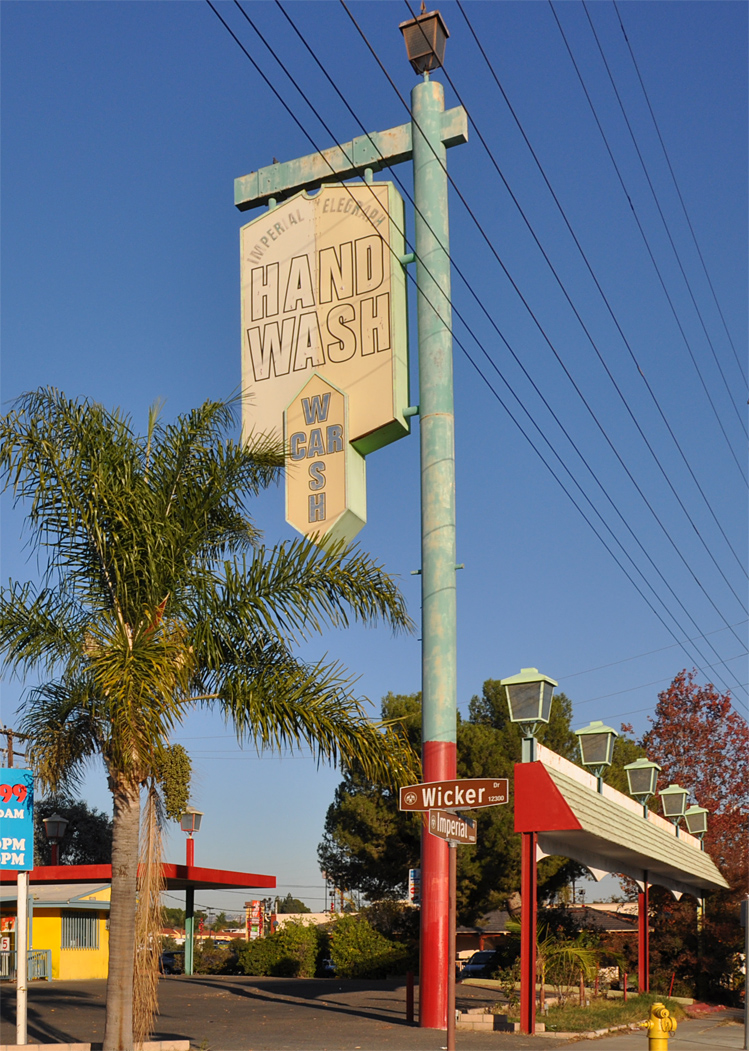 The day wrapped up nicely with a sunset run for the dogs at Huntington Beach.   We’ll pick up there again tomorrow morning and then I’ll have more Orange County & other stuff for you in my wrap-up post.  I’ll try to get that to you Monday or Tuesday.