A cloudy start to the day had me stalling & organizing the van.  Finally some intermittent sun.   And then it was time for today’s big get-together.  So, I never did make it to Orange County.  I’m hoping to get to that part of the list in a few weeks.

This photo was taken pretty much into the sun so it’s not as pretty as it should be.  On Hauser Blvd. in Los Angeles:

More from L.A.  A repurposed sign with a top hat and cane (or crop?) at the top:

There’s no doubt about what they’re selling here:

The former 5th Avenue Theatre in Inglewood.  After being vacant since forever, I’m told that they’re turning this into a church.  No signs of progress here yet.  More about the former theatre here and a photo of the marquee before it was “simplified”:
http://cinematreasures.org/theaters/2177

Neighbors have been pushing for its demolition since at least 2010.  It has survived with some appeasing remodeling and repainting — for now: 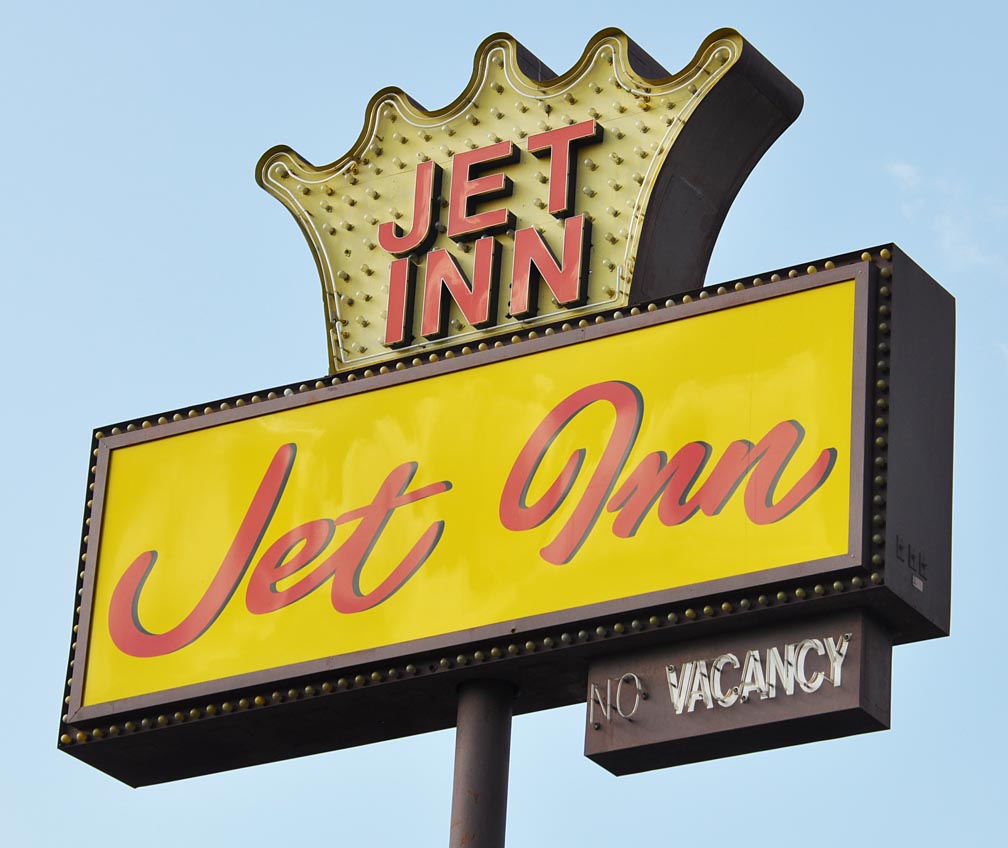 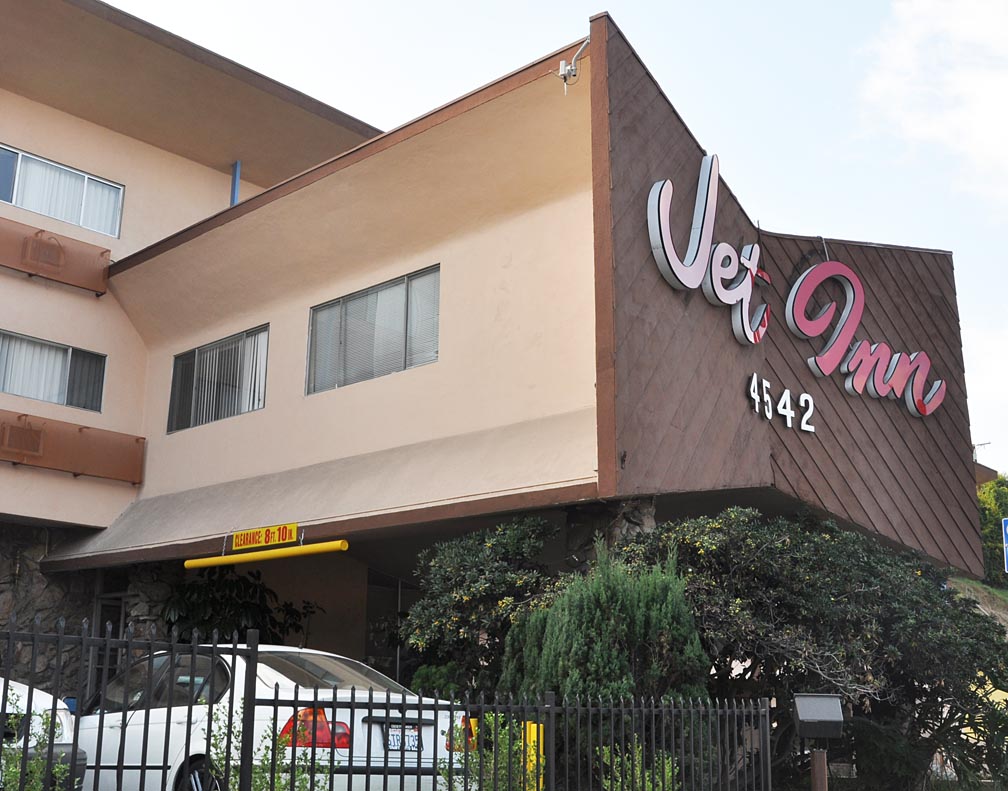 A pair of buddy signs in Hawthorne: 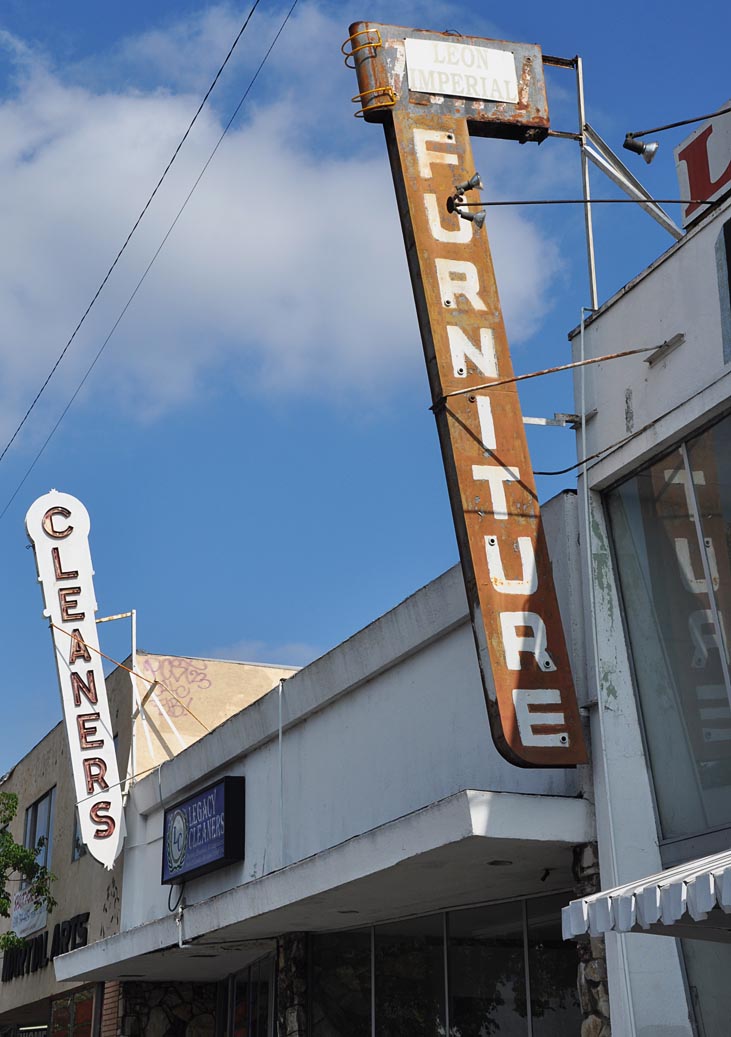 And on to today’s big event.  Just a couple of weeks ago, the former Golfer Muffler Man in Carson got an outfit.  He is now dressed as a racecar driver.  In addition to a fresh repaint, he wears an actual costume with zippers and velcro.  The former golf course will soon be transformed into the Porsche Experience Center.

“When the $28.7 million Porsche Experience Center opens for business by next winter, potential Porsche customers can then test-drive new models on a variety of circuits that allow drivers to safely experience high speeds and dangerous conditions.”

Right now, it’s just a huge dirt lot.  With a bit of networking and pleading, Terry Nelson was able to get Joel Baker and myself onto the property for a close look.  It’s considered a hardhat area even though there’s no construction whatsoever going on yet.  So we dutifully donned the hardhats and safety vests as required by the overzealous security attendant.

Normally, the only way to shoot this guy is to pull over on the highway — which can earn you a traffic ticket.  But you’ll only get a crummy shot for the risk anyway since the sun is usually right behind the statue.  From the exclusive dirt lot, you can get a side shot or a backside shot of him.

Here’s Joel and I with the newly-named Porsche Man.  Some say the statue’s Michelin hat is a jab at the Goodyear advertising directly across the freeway (that’s the blimp in the background on the right):

Joel has been enthusiastically tracking down Muffler Men around the country for a couple of years now.  He’s been interviewing owners and posting videos to his blog about his findings:
http://usagiants.com/

And here’s Joel and Terry.  Terry worked for International Fiberglass in the late 1960s and early 1970s.  He painted countless statues for them and, gratefully, saved lots of photos and records while he was there.  He shared his box of treasures with us yesterday.  We were thrilled to see photos of the statues as they were being produced, catalog materials, letters from happy business owners, paint chips, etc.  The three of us even made a trek to the “sacred ground” in nearby Venice (what is now zoned as Marina del Rey) to the former factory building. 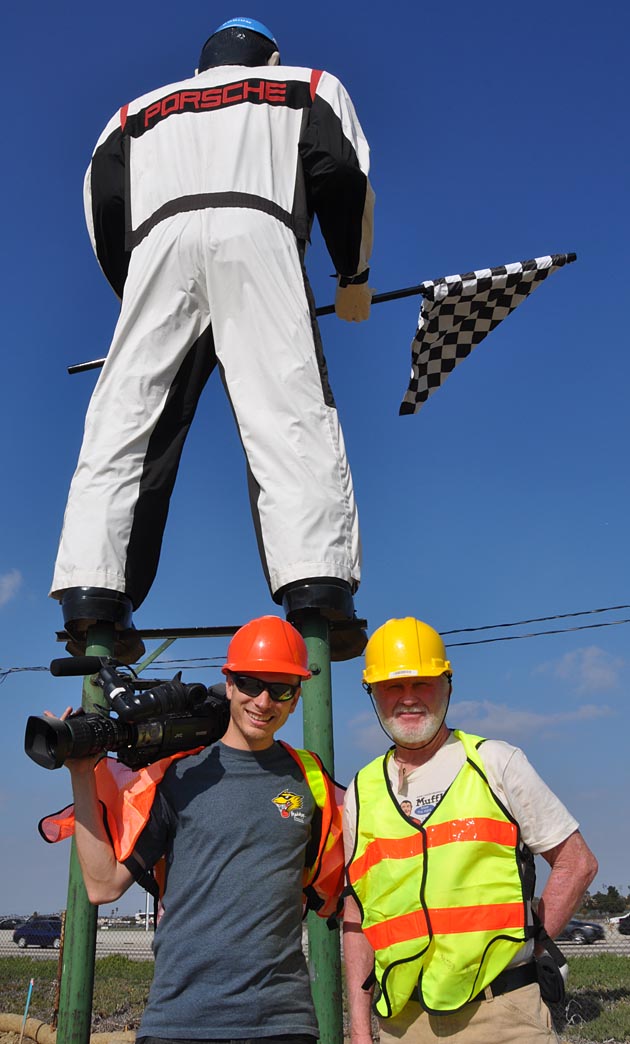 Here is a photo from one of the catalogs of a “Golfer Man” statue.  He stood at a mini golf course, location unknown.  The statue in Carson shown above had the same accessories (giant club and ballcap) originally.  These were the typical, and still fairly plentiful, Paul Bunyan type statues in other respects (right palm up, left palm down), open necked button red shirt, blue pants, and black boots:

RoadsideAmerica.com coined the term “Muffler Man” when they began documenting these giants.  Several businesses had added mufflers to these statues over the years.  And because mufflers fit the hands of these giants so well, it was assumed that this was their original purpose.  At that point, no one even knew what company produced these statues.  The name “Muffler Man” has stuck and is used loosely to describe all the giant men that International Fiberglass produced.  For more info about these statues, see RoadsideAmerica’s website here:
http://www.roadsideamerica.com/story/37422

From one of the catalogs we got to see yesterday —  some of the variations and accessories produced for these Paul Bunyan style statues (by the way, International Fiberglass simply called them “Giants”): 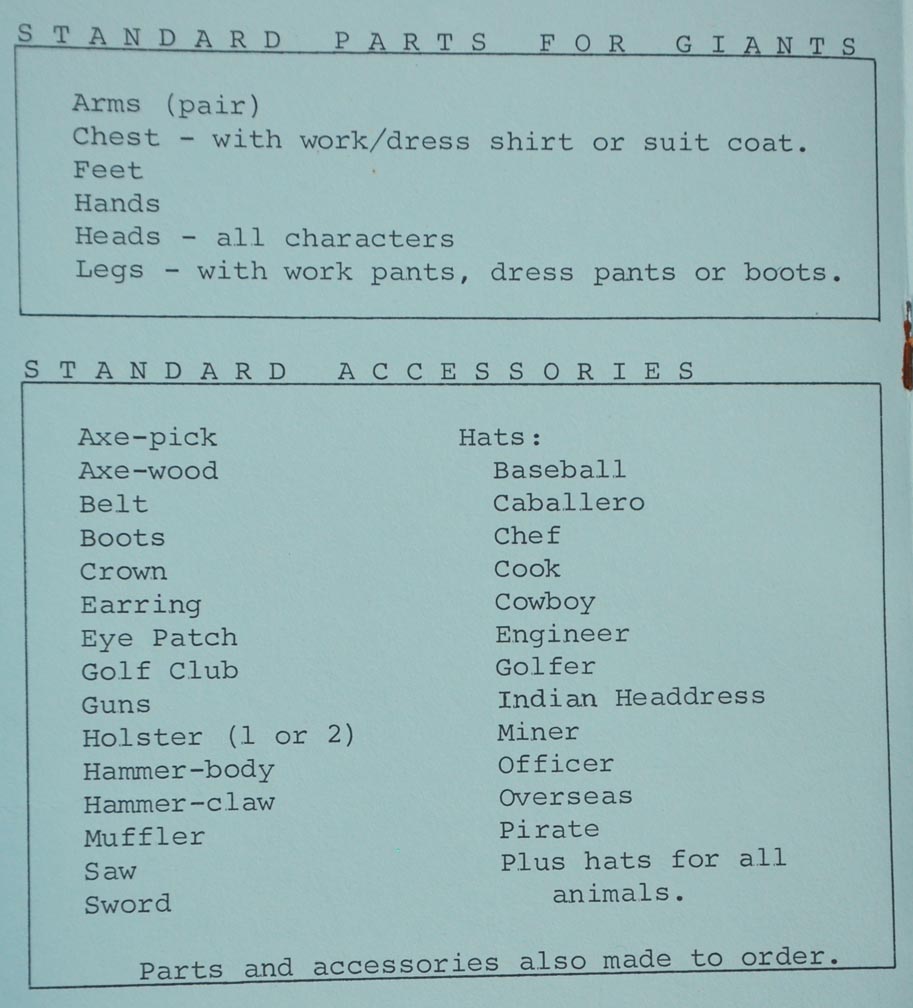 In addition to the Paul Bunyan models, the company produced other models including an Indian version.  Some were used at Mohawk gas stations — but there was no exclusive contract so they appeared at other businesses as well.  Here’s the statue as it was originally displayed around 1966 in Buffalo, NY at the Iroquois Brewery.  Note that the Indian’s arm was rotated above the elbow to hold a bottle of beer.  Normally, the Indian statues’ right hand faces the other direction in a wave or “How!” salute:

The very same statue resides now in Irving, NY, sans bottle, at the Big Indian Smoke Smoke on the Cattaraugus Indian Reservation.  The wheels are now missing from the statue’s move-able platform.  This probably happened when the brewery moved him to the roof for many years:

Another interesting fact was revealed yesterday about the Alfred E. Neuman style heads that were options for the Bunyan body.  While they’ve been described as “Half Wits” heretofore for the lack of any other known name — they were actually marketed as “Mortimer Snerds”.  Mortimer Snerd, the ventriloquist’s dummy, looks barely similar though:
http://bit.ly/173vbvw

Maybe International Fiberglass was less concerned with a copyright legal battle with Edgar Bergen than they were with MAD magazine?
http://bit.ly/18UAnl6 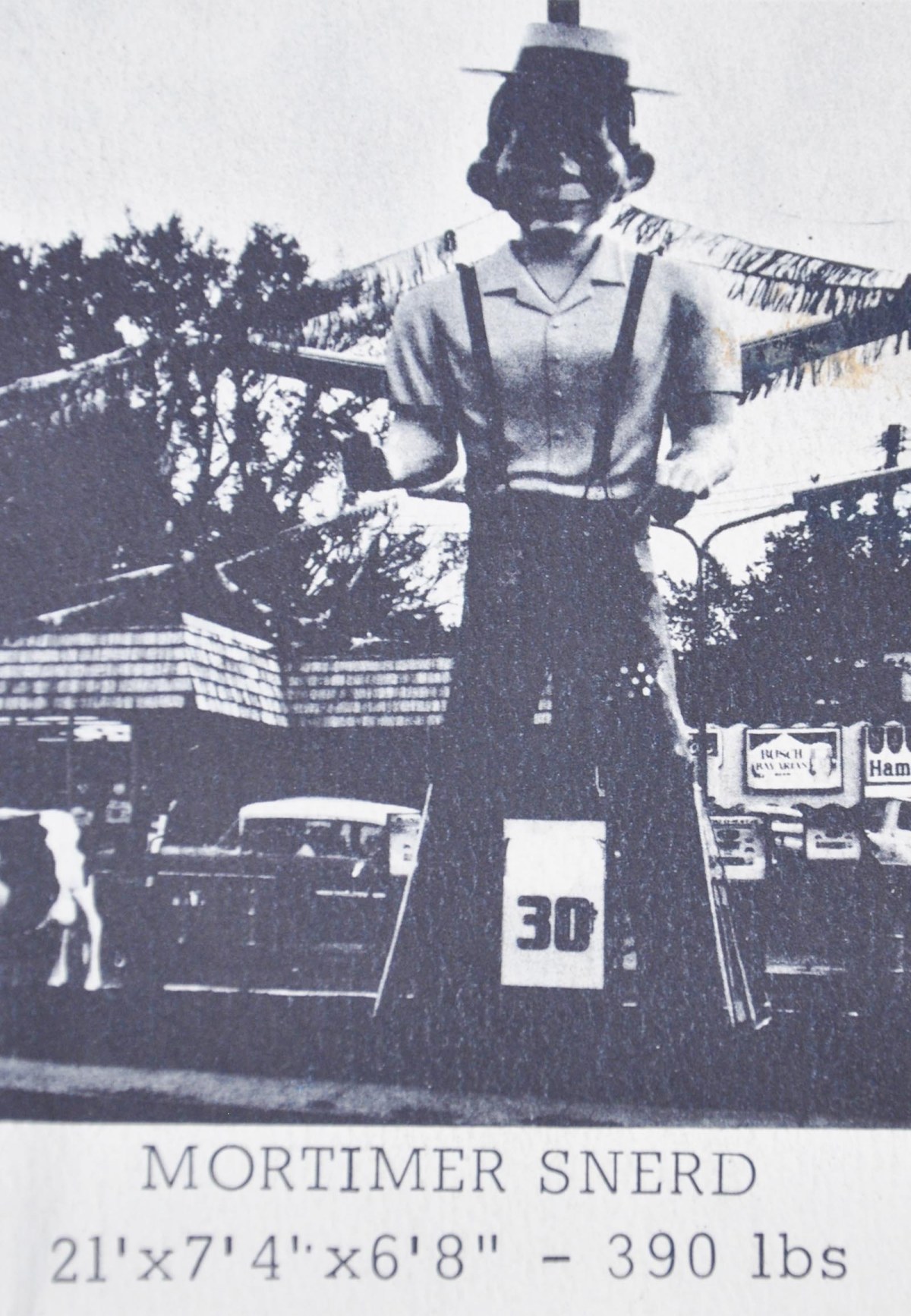 Since the photo in the catalog is so dark, I’ll include a clearer photo of this style head.  This one is in Jackson, NJ:

The company also produced countless animal statues (the classic roosters, bears, Esso tigers, Sinclair dinosaurs, etc.) that are still out there around the country.  But they also made other giant statues of people that have all but disappeared.  These are my favorites.  What I call the “professionals” but what International Fiberglass simply called “ten foot giants”.  Several of the statues had animated, moving arms and heads.  In this photo, that’s Steve Dashew, the President and owner of International Fiberglass, posing with the statues.
[P.S. don’t forget folks, you can click on any photos at my blog or website for larger photos]

This entire group was sold to one company and then a few individual statues like these were sold after that.  Locations and business names all unknown.  There are only two giants that Joel and I know of that still exist of this style.  This guy in Los Angeles stands on the roof of VIP Tire & Auto.  He appears to be an example of the fourth statue in the group shot above.  In one promotional photo, he is labeled as a “Tire Salesman”.  Purchasers had the option of buying a “car top carrier” for him as well.  Note the gap at the elbow indicating that he used to wave.  No one knows where he was located originally:

This guy below is at Magic Forest in Lake George, NY.  He appears to be the same statue as above with maybe a little remodeling over the years:

Another thrilling discovery from yesterday.  It’s not known how many were made and none are known to still exist.  Terry had a photo of one statue freshly painted but doesn’t know where it wound up.  This illustration came out better than my photo:

And, we have confirmation that International Fiberglass produced the Steak Corral statue(s).  I know there was a location in West Covina, CA that’s gone now.  I don’t know if there were other statues built in addition to the the one at the Whittier, CA location that’s still open.   I can’t pin a date to the statue yet — only that the restaurant in Whittier was built by the early 1970s.  The building in the photo below isn’t a match for the place in Whittier.  Of course, it could have been remodeled:

And here’s the wonderful statue in front of the restaurant in Whittier — still with his lasso — but missing his steak. As far as I know, the character didn’t have a name:

Coincidentally, I came across this photo yesterday of the place pre-cactus sign.  The restaurant opened in 1961 — the cactus sign was built in 1964.  The grazing cattle in front of the restaurant were produced by International Fiberglass:

The same view with bigger bushes in 2001:

The cows are gone already — donated or sold.  But no one knows what will become of the 80 foot tall cactus sign:

And lastly, you have probably not gotten over the frightful Santa that I posted a photo of yesterday.  Well, here he is again — straight from the company promotional materials — with all of his stats.  Evidently then, there was one at the Pottery Barn in Laguna Beach, CA.  Let me know if you come across any of these guys.   A friend called about the one I saw in L.A. yesterday and he’s already been sold.  So, the only other one that I know of on public view is the one at Magic Forest in Lake George, NY:

So, that’s enough fiberglass for one sitting for most of you I’m sure!  Thank you Joel & thank you Terry for sharing with me so that I can share with others the secrets of these treasures.

I’ll be back in two or three weeks with more stuff from Orange County.  More signs, less statues, I promise!

P.S. Don’t forget to check out the Flickr stuff from this weekend — different photos:
http://www.flickr.com/photos/agilitynut/

[NOTE:   ALL PHOTOS HERE ARE COPYRIGHTED RoadsideArchitecture.com — and not to be used without permission for any purpose including blogs, Pinterest….. anything!  Thanks.]