Hi there — another big day all over the L.A. area.  I accomplished a lot but still have Hollywood and Valley stuff to do tomorrow.  I’m thoroughly exhausted from being up really late two nights in a row.  What kills me time-wise is the night-time shooting.  I had a couple of things I wanted to shoot tonight — but now way, another time, too trashed.

Let’s start with this ghost billboard sign.  Somewhere on the Imperial Highway east of Hawthorne:

In Inglewood, there’s a little statue and doggie drinking fountain with a tribute to Penelope.  It appears that Penelope was a Sheltie:

And for scale, here’s the very first group family portrait with the new kid.  Left to right:  Sputnik, Fix, Griswold & Gremlin.  Oh and Sparkle is there on the far right — chugging along nicely on this trip with 342,000 miles now: 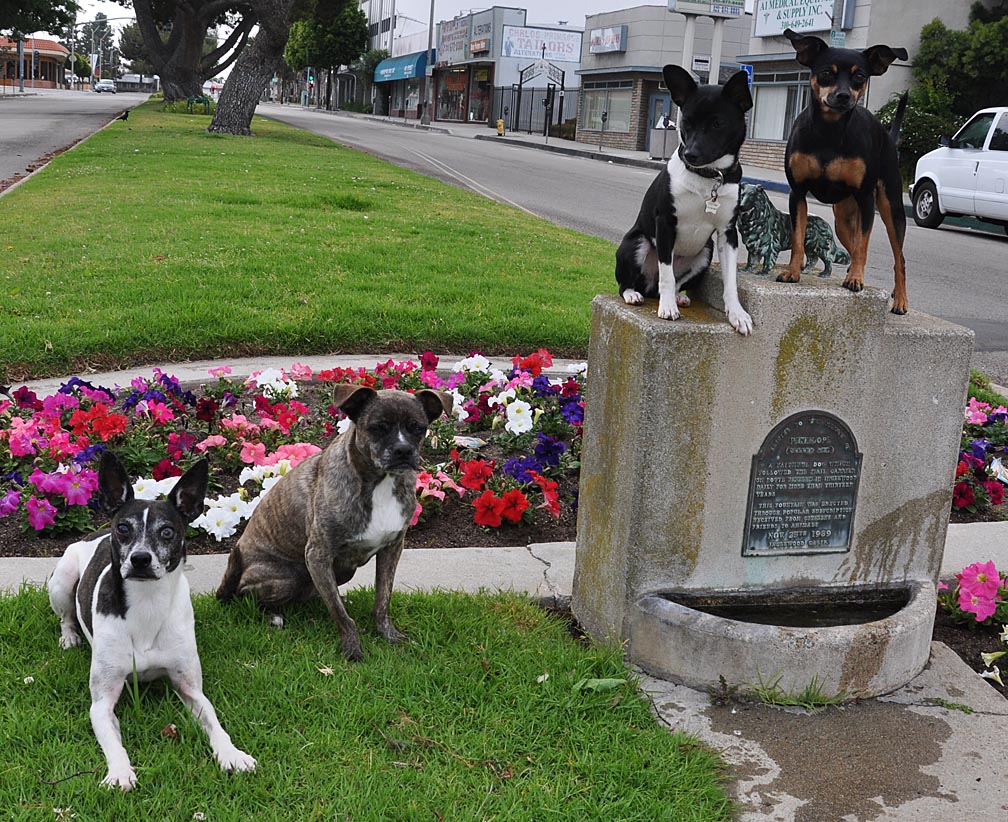 Another old Pep Boys sign — this one in Inglewood — and this store had the same terrazzo entrance.  So maybe that was common at Pep Boys stores in California?  I don’t remember seeing it at the ones in Pennsylvania.

The sign was knocked over by high winds in 2010 and could not be repaired.  The sign shop and owner decided to build a replica sign.  I was told it would cost about $30,000 and that it would look just like the old one.  Well, I don’t know what happened — but this is what I found today.  Just not the same at all… 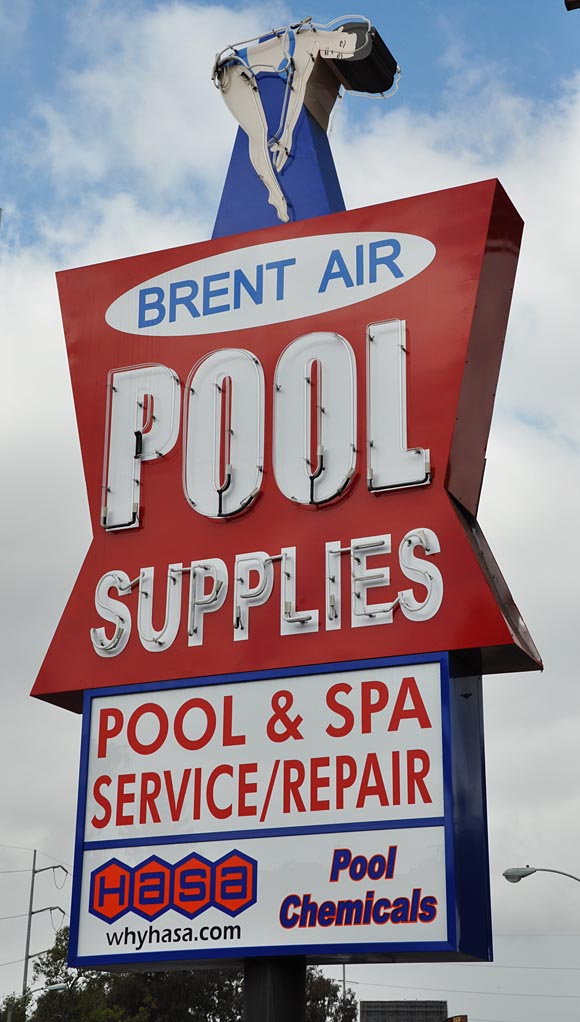 This sign on Fairfax in L.A. at the Solid One Gallery tattoo studio & art gallery looks like it might have been a Norge Ball with the band removed:
http://www.agilitynut.com/signs/norge.html

The size looks right — it could have been painted.  But, then again, it might just be a new plastic ball.

The former Darkroom is a heckuva lot easier to shoot now that the City came down on them for having tables & umbrellas on the sidewalk.   The City wanted them to get a permit for $6,000 — which they won’t do.  The facade’s giant camera is faced with black vitrolite (glass tiles).  More about the Darkroom’s history here:
http://www.yesterland.com/darkroom.html

A rooftop ghost sign in downtown L.A.  I have no idea what it said other than “Loan Co” and later “[something] Club”:

I made a pit stop for lunch in Echo Park.  I’ve seen dozens of these Los Burritos stands around L.A. but I don’t think I’ve ever eaten at one.  This one was adorably tiny so I pulled over and got my usual:   a chile relleno burrito.

Sorry to report, I can only give this one a “C”.  Pretty bland, watery beans, the cheese in the chile not gooey enough. But it was nice and filling and the dogs thought it was certainly great.  Griz was a fussy eater a couple of weeks ago — but now he’s game for anything I offer him.  Maybe he only knew dog food before. 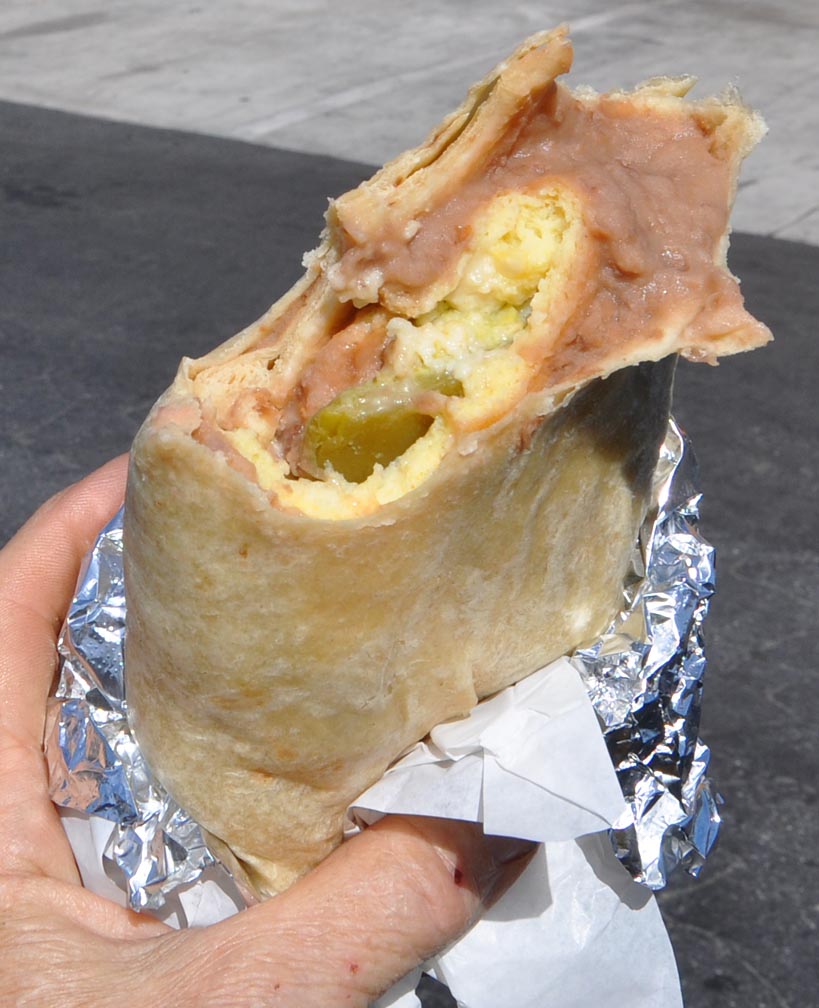 This sign is at the Carpet Village in Hollywood.  It’s pretty tiny and way high up — but I shoot just about anything with crowns:

Last one for the night — also in Hollywood.  I went to check on the giant Easter Island Heads (or Moai, if you prefer).  The prop house had a fire and these guys got scorched a bit but they are now safe behind the chain link fencing.

Tomorrow (Monday/Memorial Day), I’ll try to wrap things up by the afternoon to avoid getting bogged down in traffic heading home.  I might be too beat to do the final blog post tomorrow night.  So, that might have to wait until Tuesday.   Til then — nighty night.