Three days off?  Hell yeah — let’s take some pictures!  So I’m off to L.A. again with a big list and a big map — and a new addition to the family.  Are ya’ll ready to tag along?  Well, you’re probably all at the beach or hanging with friends and family so you won’t have quite the virtual experience.

First off — let’s meet the new kid.  Not to worry, I have PLENTY of roadside photos for you, too.  After moping around for a few months after losing Grip, I found myself drawn to Petfinder and came across this dog which I couldn’t put out of my mind.  I emailed and had hoped that he’d been adopted but nope.  They’d had him a couple of months and no inquiries.  So, off to the desert I went to meet him — and that was that.  I’m back to a pack of four dogs.  I’ve had the guy about two weeks and he’s blended in well.  He’s about 10 pounds and probably around 10 months old.  Most likely a Rat Terrier — though this much black is pretty unusual.  He was “Pappy” at the shelter and then “Ulysses” at his foster home.   I’ve named him “Griz”, short for “Griswold”. 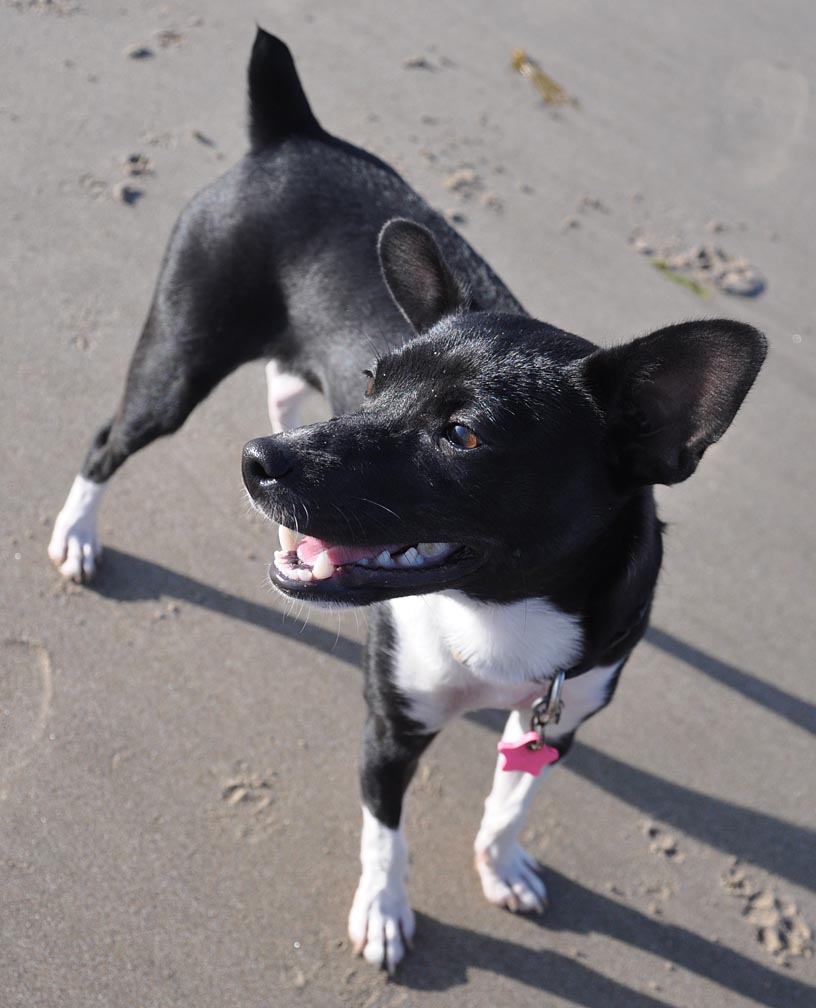 Lining up for dinner at home:

And from his first roadtrip (as far as I know) from today.  Two dogs in my lap on window duty (Grem & Griz):

Grem may be six years old but she’s still got enough spunk & energy to wrestle for hours a day with this young whipper snapper.  He’s a little bigger but she’s definitely in charge.  An over the shoulder shot while driving today: 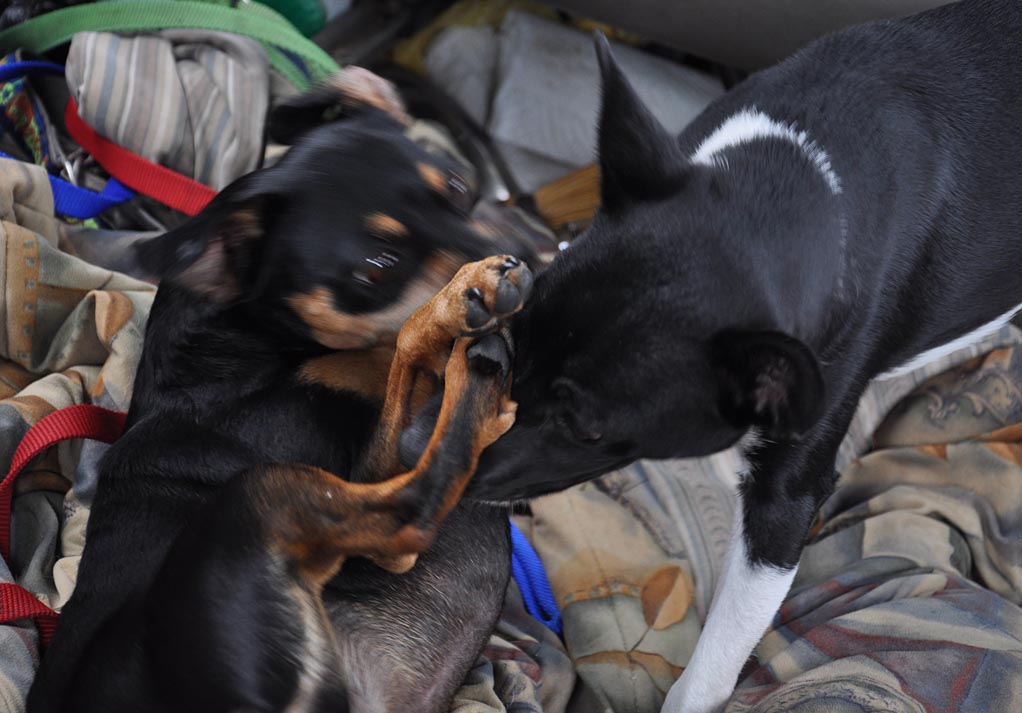 As the day progressed, Griz’s eyes got smaller and smaller.  This roadtrip stuff is exhausting!

OK then — on with the show!   I drove down to L.A. after work & got some night shots for you.  From Culver City: 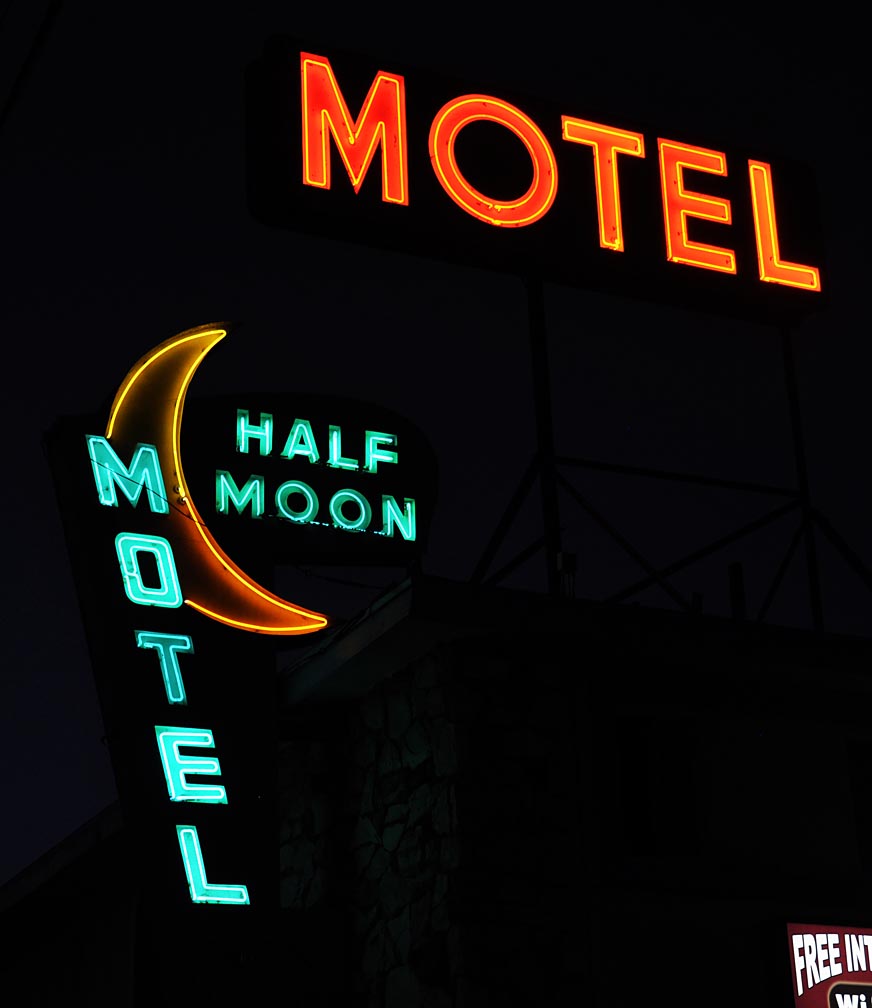 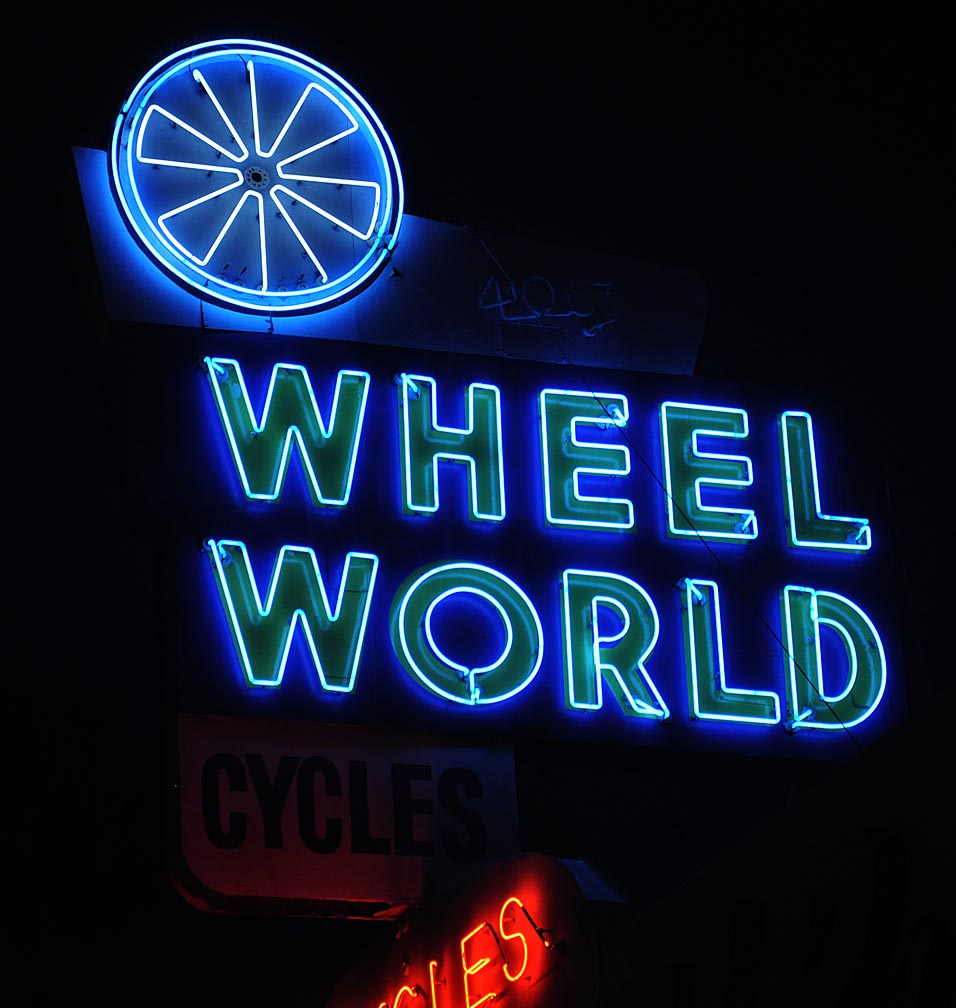 From Hollywood — Crossroads of the World:

The Winchell’s Donut sign in West Hollywood.  Some info about it here:
http://www.insidesocal.com/davidallen/2011/10/07/upland-winchells-sign-is-now-a/

On with today’s photos.  A former Alta Dena Dairy drive-thru store in Compton:

From Pico Rivera.  The mortar & pestle, top left, used to have neon as well:

This trip was a little more complicated than the last one — so I went back to my old ways of a printed map (vs. that free phone app) and my list.  This was old big handmade folding map I made with taped together Google maps — the pushpins from Google & just the street number written next to them to jive with the chronological printed list.  Does that make sense to anyone but me? 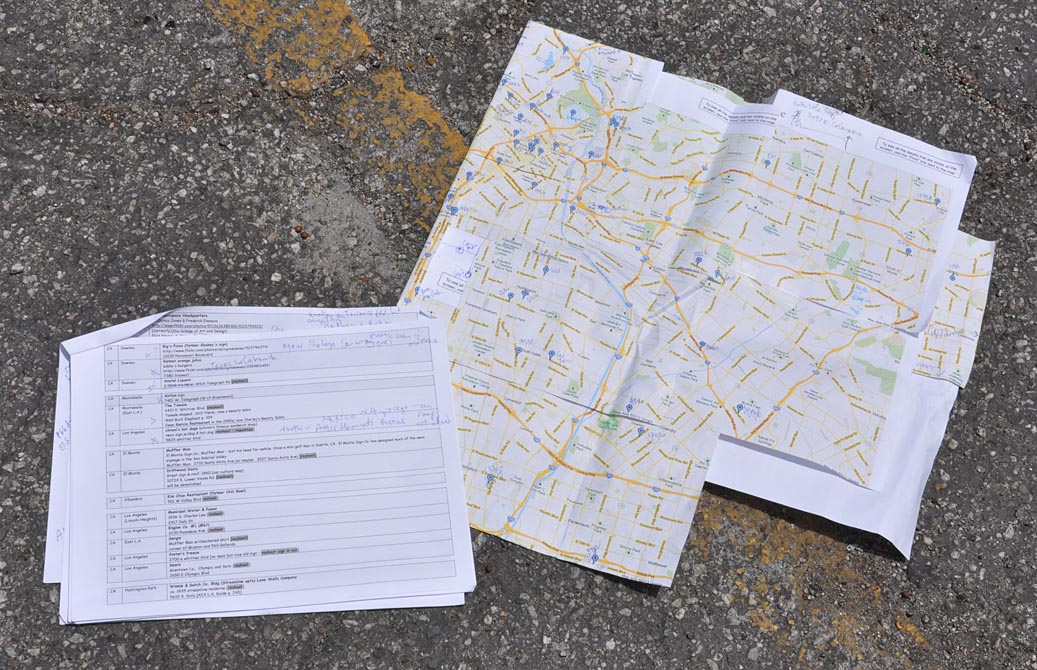 An old Pep Boys in L.A. (on Atlantic, north of Beverly): 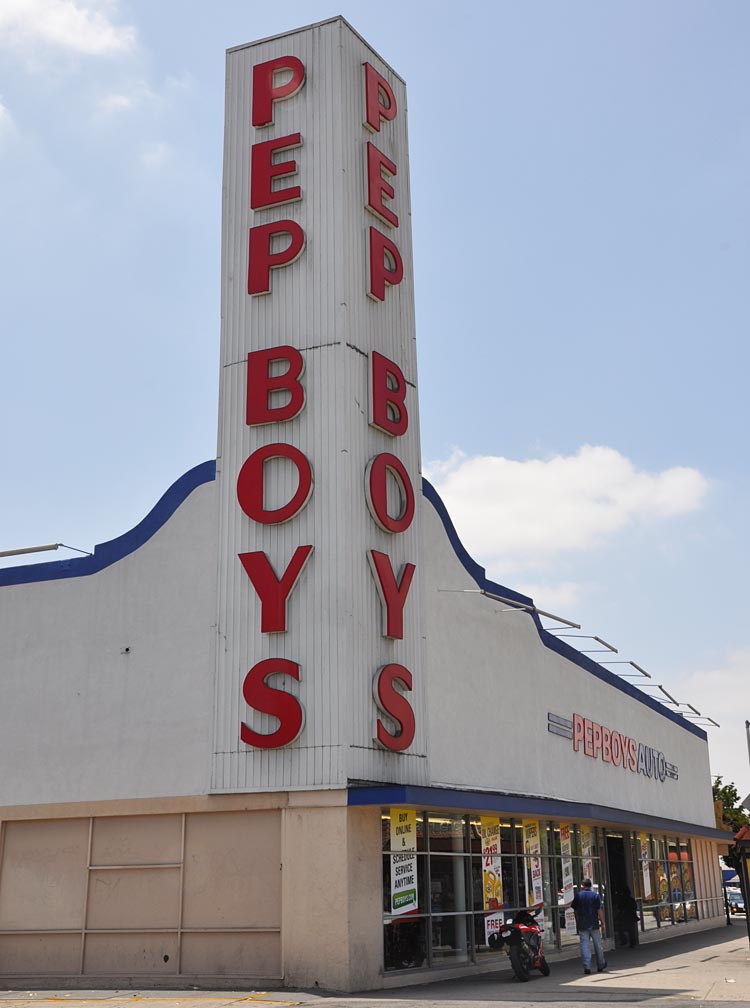 It comes with a terrazzo “apron”.  I’ve never seen that at a Pep Boys before — maybe I need to start looking:

I’m still dumbstruck by the native SoCal foliage.  Purple trees?  OK, back east we have lilacs & wisteria — but this just doesn’t seem possible.  I’ve figured this one out — jacaranda trees, right?  And they are all over the place right now.  With piles of purple on the ground, too:

From Alhambra.  I would guess that this was another drive-thru dairy store — now dolled up with some retro lettering and serving as a water store:

I’ve been to this Foster’s Freeze in L.A. at least two times — always crappy weather til today:

What’s unusual about this Foster’s sign is the ice cream part.  The metal seems to have been cut out and a plastic piece inserted — which I assume was backlit.   For more Foster’s buildings and signs, I’ve got this page at my site:
http://agilitynut.com/eateries/fosters.html 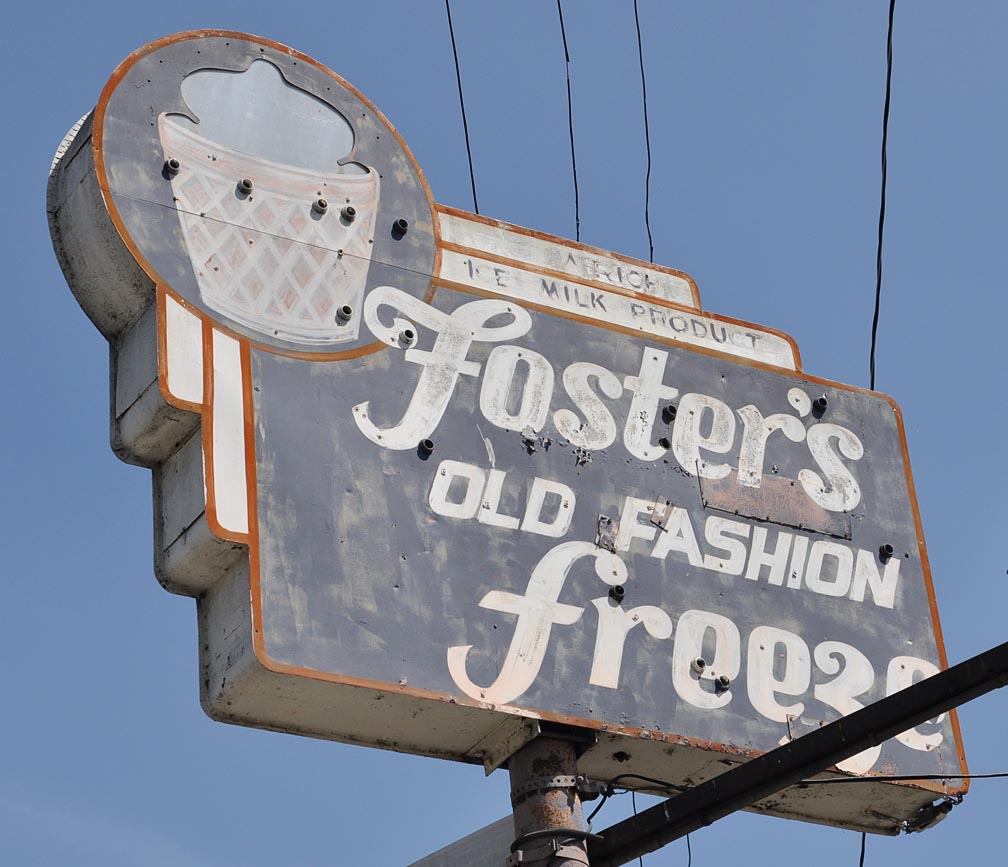 And yes, I indulged.  I only allow myself sugary stuff on roadtrips — so this was it.  A small triple berry sundae.  I think strawberry & raspberry — don’t know what the third was.  Thumbs and paws up from me and the kids: 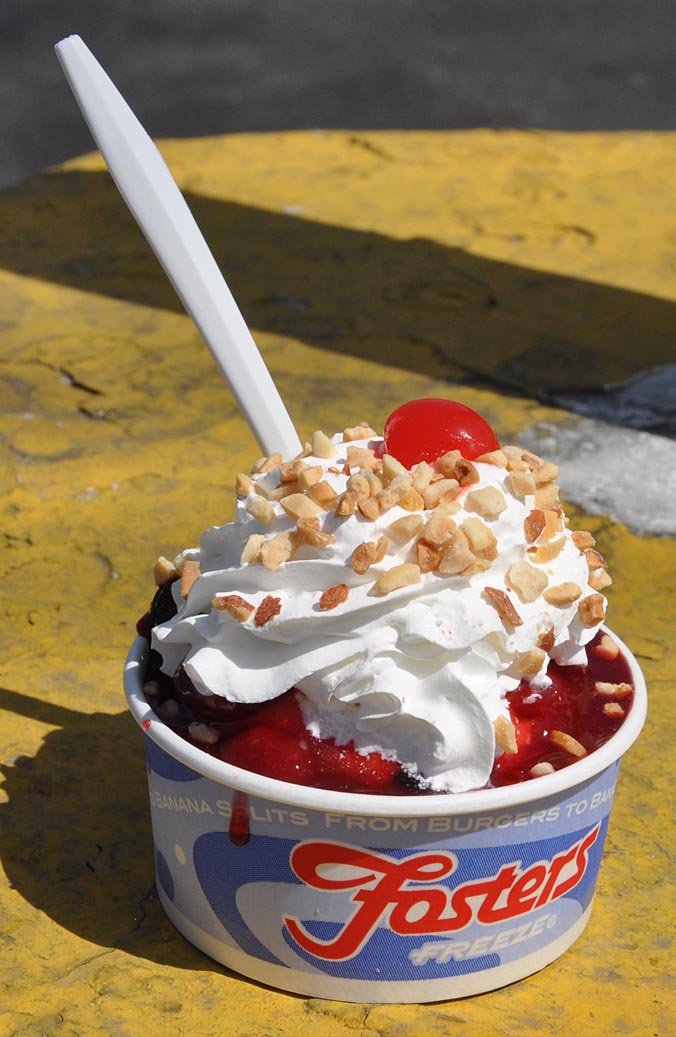 and another, unfortunately, tarted up with signs:

This one in L.A. really intrigues me.  The waffle cone patterning reminds me of a Twistee Treat — though entirely the wrong shape.  More like a teapot — but no spout.  The building is round — or, more accurately, conical.  The hideous door has to be a later addition:

and was horrified to see what it looked like today:

And let’s close out with some neon from Pasadena.  This is a nice rooftop sign.  Here it is by day:
http://www.flickr.com/photos/calamity_hane/3599967702/ 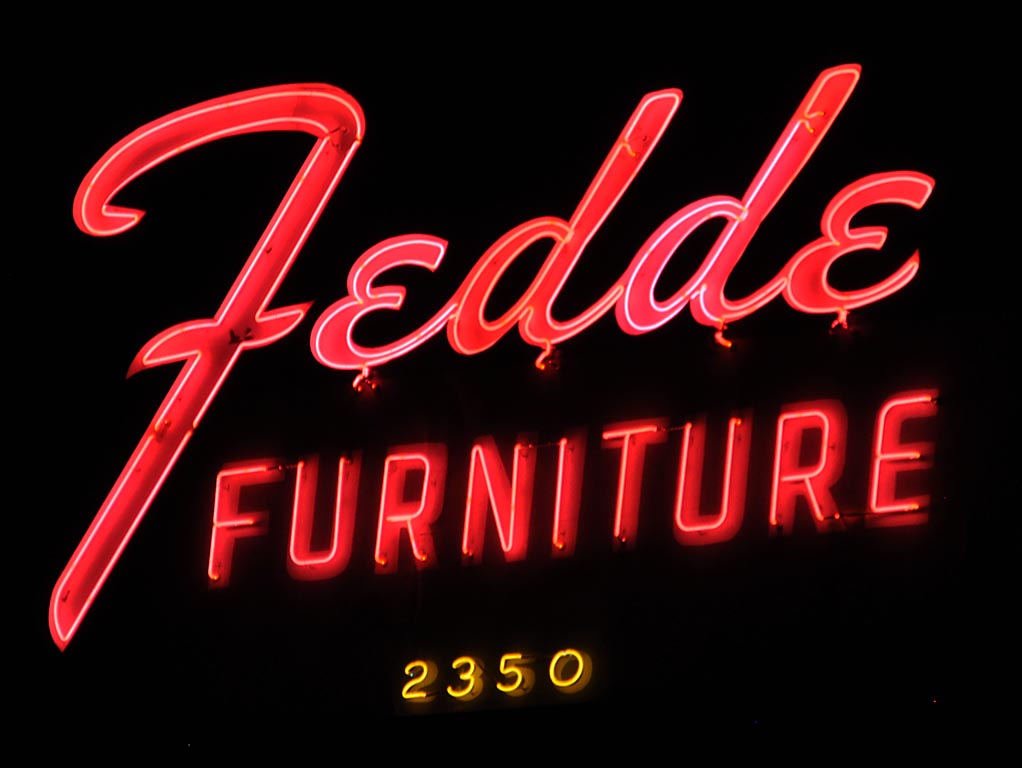 I was thinking when I shot this that the white neon was an arrow — but now I realize that it was a white chicken.

For more details of the Gus’s signs, see my photos over at ipernity.  I’m done with Flickr.  They’ve changed their format into something absolutely horrible (slow and ugly).  I’ve copied all my Flickr photos there and will only be uploading the new stuff to ipernity.  So, here’s the link (more & different photos from today):