I started the day proactively — took Sparkle in for the post-Accident alignment at 7am.  Check that off the to-do list.  I got it for free at least since I’d wisely gotten that Lifetime Alignment thingie at a Firestone back in San Angelo, TX.  The procedure took about an hour.  Then I began shooting in Albuquerque.  I was psyched!  Great sun and a huge list of stuff all dense and organized.

Around noon, it started getting really hot — the dogs were panting.  So I turned on the A/C. Nothing.  Dammit!!  It was working fine just last week.  And no matter how much I have it looked over before I leave home, no matter how many thousands of dollars I spend on it (probably close to $5000 in three years now), it breaks down on my trips and takes up gobs of time.  But no choice here — it’s gonna be 110 in Phoenix and wherever else.  Had to get it fixed.

I spied  a Firestone immediately ahead.  Yup, freon all gone and they took two hours to find the source of the leak.  Finally, discovered cracks in the “hose set”.  Sparkle has an A/C hose that runs to front, rear and sides — a big octopus thing that’s about ten feet long.  It took them an hour to find the part.  Then they said maybe two hours to install it and recharge the freon.  It was killing me to sit there with that gorgeous sun.  So I headed off in the heat to shoot some nearby stuff with the dogs in tow.

We were nearly dead after two hours.  I had brought water along and tried to keep us in the shade as much as possible — but it was killer.  So, we went back and sat around the waiting room some more.  Finally, just past their closing time of 6pm, it was finished. SIX HOURS!!!  I was not a happy camper.  Oh, and another bill:  $788.  Good god — is this the most expensive roadtrip ever or what?

I tried to find my motivation and get a little shooting done before the light went.  But I was just so miserable and pissed.  Plus — a new little irritating noise that wasn’t there before the A/C was fixed.  The hood isn’t closing tightly since The Accident.  No big deal.  But now it’s squeaking!  Eee-eee, eee-eee, eee-ee.  I’m trying to ignore it but it’s like fingernails on a chalkboard.  I finally stuffed a small towel in there just so that it cuts back on some of the noise.  Will play with it some more tomorrow — and maybe even stop at a body shop and see if I can do something quick and easy to quiet the thing.

OK, enough whining.  I did manage to get a lot done today despite the ordeal.  Here’s another example of the local approach to fast food buildings:

What’s left of the cavalier at the Cavalier Motel.  Another business has covered up the rest of the sign with a vinyl tarp: 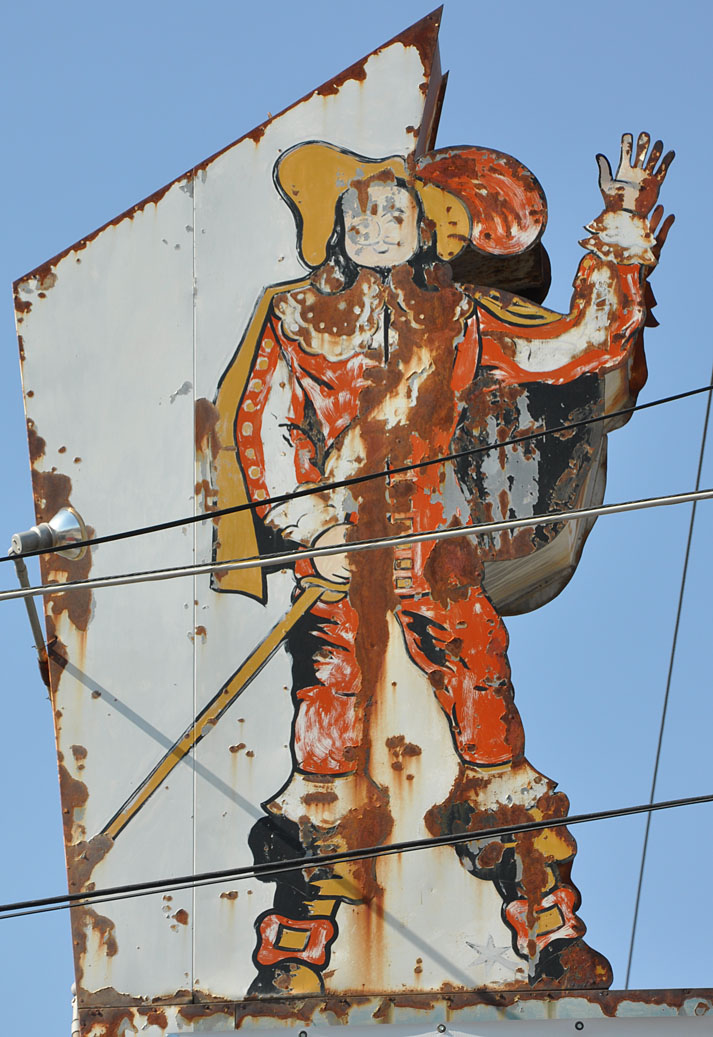 Many of you probably thought the Uptown Plaza Roto-Sphere in Gallup was destroyed when it was removed in 2006:
http://www.flickr.com/photos/joeyharrison/152903023/lightbox/

But I tracked it down and went to pay it a visit today at Southwest Signs.  It’s still sitting there gathering dust.  The arms in another corner.  The shop is waiting for the owner to come up with the money to pay for the restoration:

I got a little tour of the sign shop.  No neon signs sitting around — but some other interesting stuff.  Including this Dennis the Menace sign which I was told was installed at a Dairy Queen:

I didn’t know about the Dennis & DQ connection before but Wikipedia provides this:

“Dennis the Menace appeared in Dairy Queen marketing from 1971 until 2001, when he was dropped because Dairy Queen felt children could no longer relate to him.”

On to Central Ave. (Route 66) and all the treasures and used-to-be treasures.  I’ve often wondered if there weren’t stars or something else on the harp-like neon strings:

Some of these photos were taking with my panting crew along, god bless ’em.  I’ve done a lot of training with them and it’s handy to be able to tell them to stay, drop the leashes and step out into traffic to get the right shooting angle for things:

Never noticed this one before — that’s what happens when you’re walking vs. driving.  But walking still sucks: 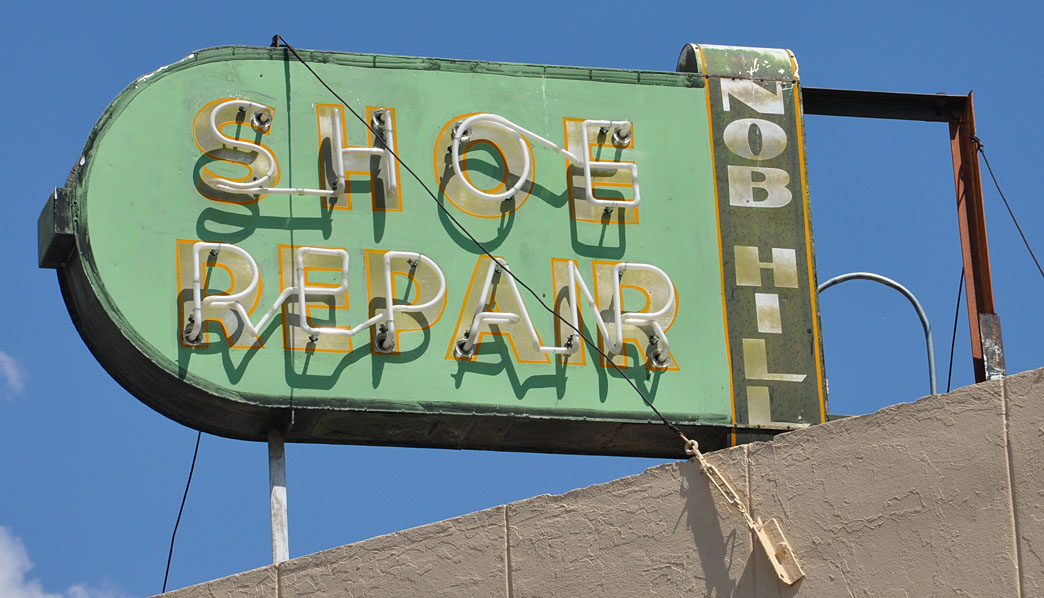 OK — what braniac installed all these freaking white lightposts on Central Ave. since my last trip?  I can’t believe how stupid this “improvement” was.  I guess they just stuck them in every 30 feet or whatever completely ignorant of anything else.  This is the recently adapted Nob Hill Motel sign — a link to the unobstructed, pre-adapted view in 2006:
http://www.flickr.com/photos/agilitynut/283158933/ 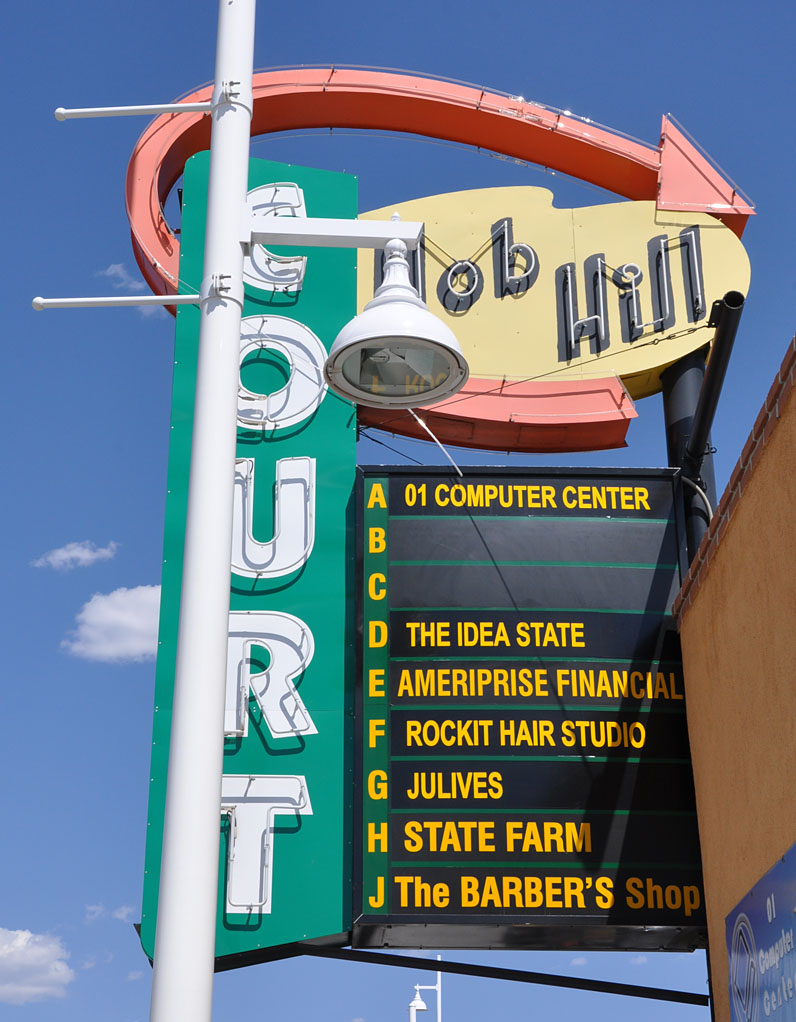 Nice white pole, huh?  And here are a couple other examples:

This motel is gone — but the sign still there.  The text beneath it reads “Hiway House” and was used for another motel which is still down the street.  More info about the history of this place here:
http://www.flickr.com/photos/madronaway/5570203314/

Another sign I don’t think I’ve shot before but stopped since we were on foot:

And some post-A/C-repair shots.  Just kick me again!  Here’s my 2008 photo of Galles Chevrolet:

And the remodeling in January this year — dammit!:

At least they left the interior alone:

I took a little break when the sun got too low and then hit the streets again later for some night shooting.  Therefore, I’m writing this post right now at 1:40 am.  Sheesh. 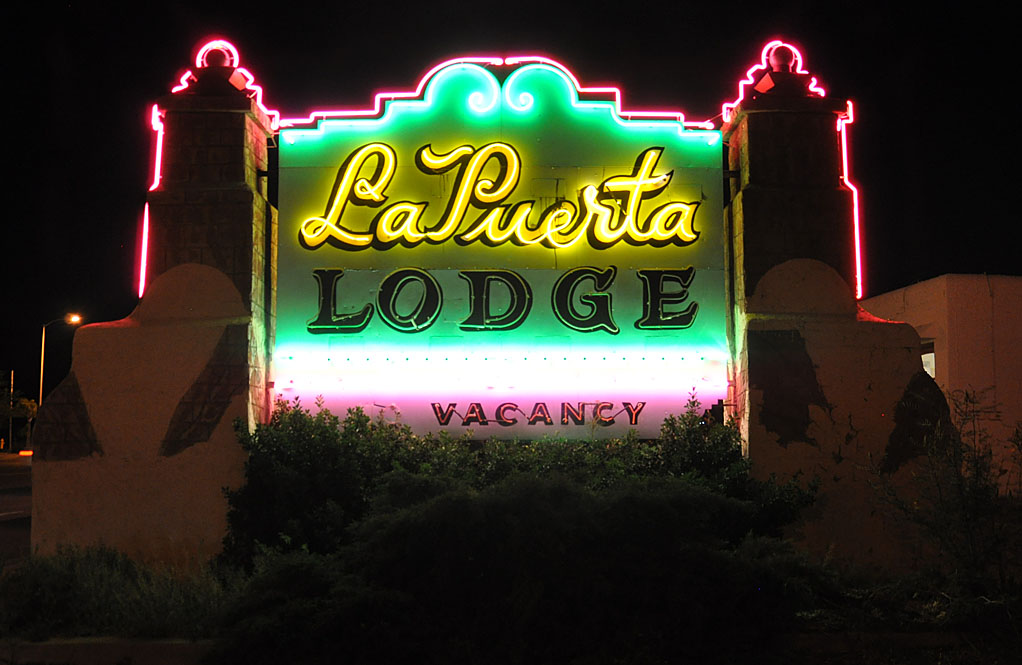 Lastly, this window “skeleton” sign (just neon, no sign panel) is at the Modern Cleaners.  It’s a two-part animation with the worker’s right arm and iron moving back and forth.  I can’t tell if it’s vintage or new:

Tomorrow’s forecast is for more sun with maybe some clouds (the good white kind or the bad interfering kind, I don’t know).  With a few hours sleep, I’ll be full of determination and positivity again.  Maybe I can still get back on schedule even with today’s delay.