I don’t know where to begin.  Already a day behind with this blog because of my “date” last night.  And I’ve got tons of photos for you — despite crappy weather and MORE mechanical problems.  This trip is really off to a complicated, frustrating, expensive start!  Four more weeks to go and things have just GOT to get better.  I’ll keep the report short since I could really use some sleep. Went to the dealership in Ann Arbor this morning re: the 2nd appearance of the “Service Engine Soon” light.  They said they could check it but wouldn’t be able to start working on anything til Tuesday.  Uh, no thanks.  So I called a bunch of other dealers and it seems they all order their parts from Cincinnati rather than getting them from a local parts dealer.  Since, it’s Friday, and they would all be closed for the weekend or super short hours on Saturday, I’d be stranded til Monday anyway waiting most likely for a part.  No thanks.

So I found a local, normal auto repair place.  The guy there dropped what he was doing to do the computer thing.  Sure enough, the same transmission code.  And he had the same opinion that the guys in Grass Lake had:  since there were no physical symptoms, it would be guessing which part needed replacing.  He also noted that any transmission job might be a 7 hours even for a tiny part.  Great. So, back on the road — listening and feeling for any changes in shifting, etc.  But everything normal.  Headed over to Canada for some stuff there that have been on my list for a long time.  Back to Detroit around 4pm and finally the sun came out.  Hooray!  Starting to really enjoy shooting again — and then at 5:30, power just went.  I coasted to stop.  Called AAA and waited two hours for a tow.  While waiting, managed to research via iPhone to find a nearby Firestone that’s open Saturday AND Sunday.  So, hopefully, I’ve set myself up for success.  They promised to look at Sparkle at 7am.  Fingers, toes, eyes crossed that I can get back on the road tomorrow.

On with the show.  Here’s a nice hand-painted wooden sign from Hydro Power Pressure Cleaning in Lincoln Park: 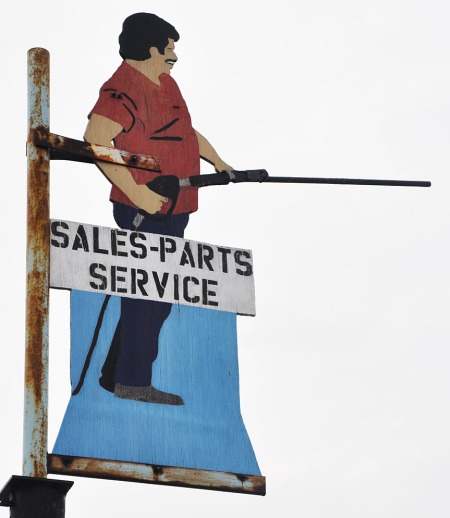 Also in Lincoln Park — much prettier on a sunny day — but this is what I had to work with.  For folks unfamiliar, a “party store” doesn’t sell party supplies but rather booze (I guess since you consume alcohol at parties):

This Italian restaurant is in Trenton: 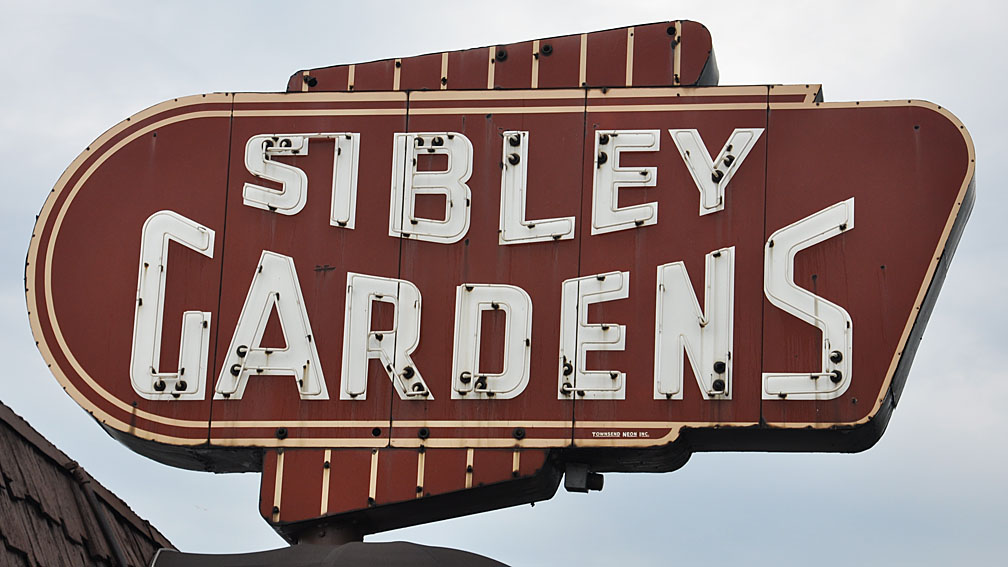 From Wyandotte — Chelsea Menswear & Tuxedos — a fun 1970s looking facade that I’m sure it much despised by many townsfolk: 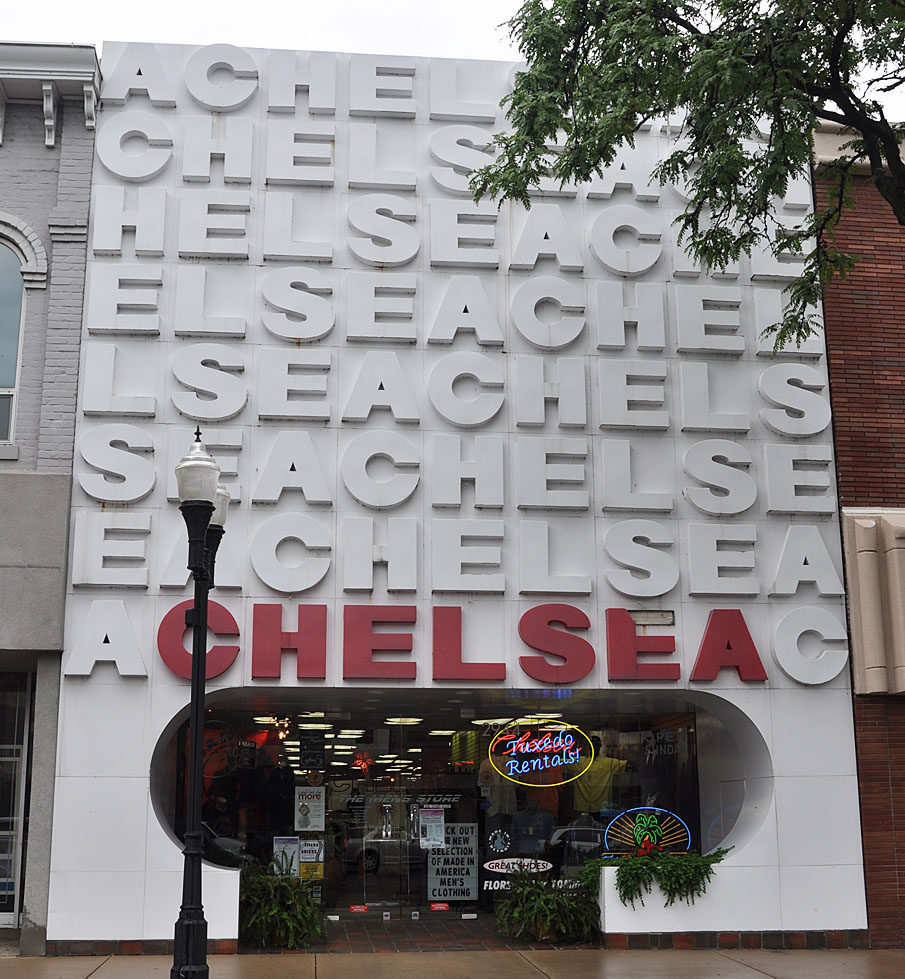 Back in Detroit again — this car on a pole is at Rim City — though there must have been a car limo place there before.  Crappy weather, huh?:

A former theatre or fancy store?  I know nothing about this one: 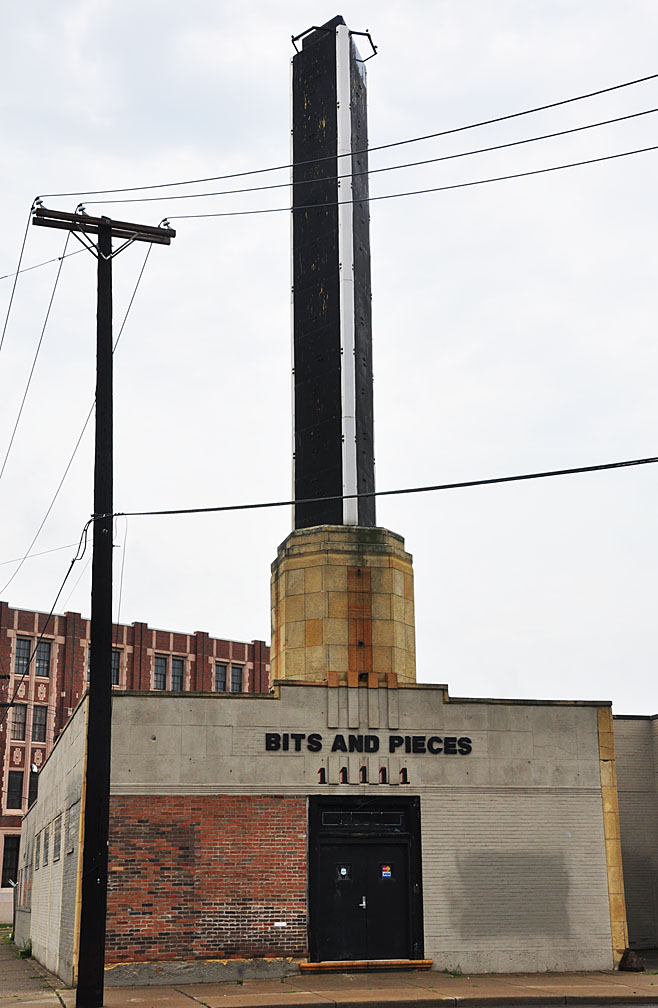 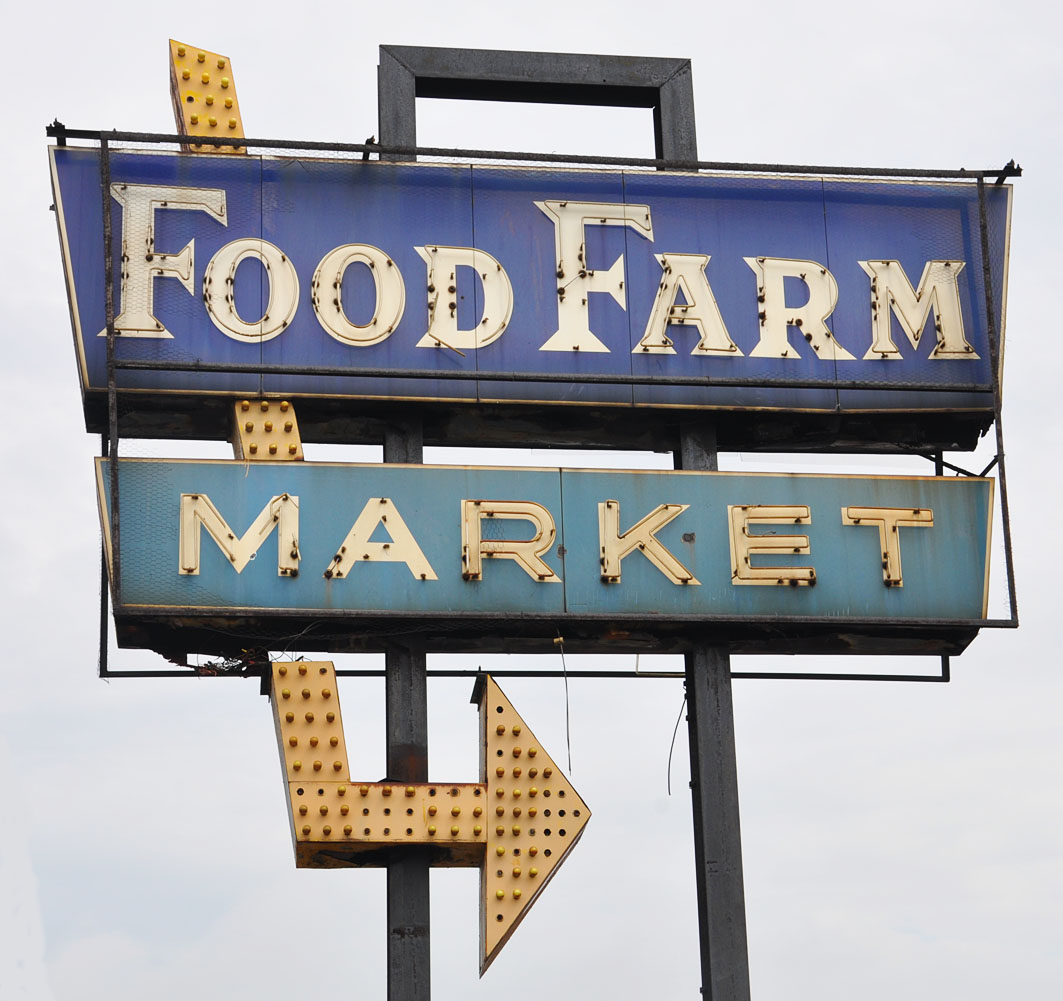 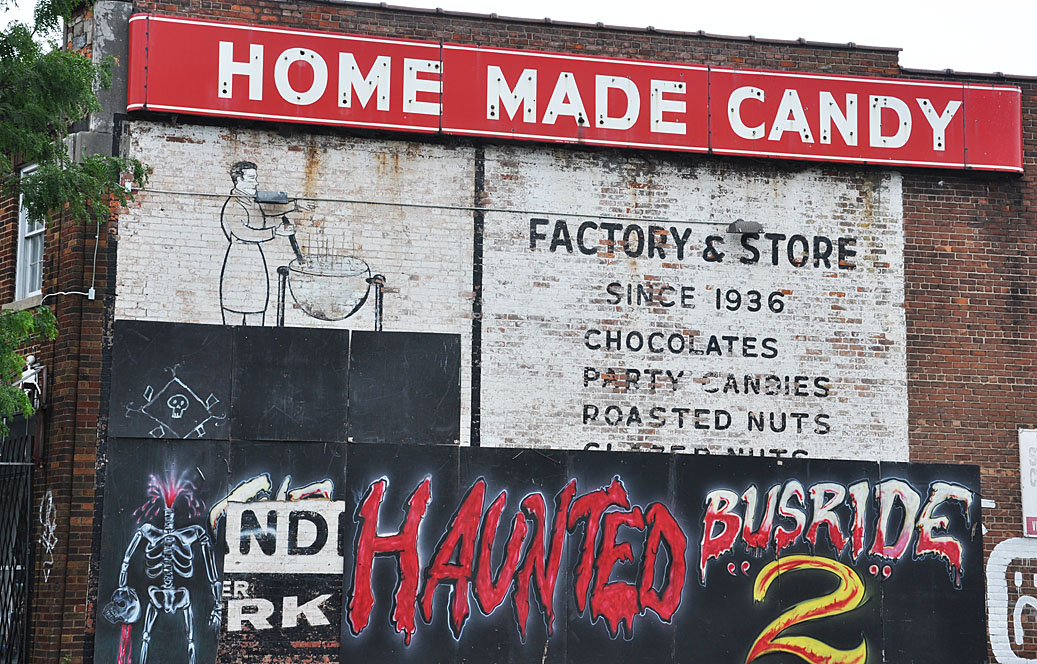 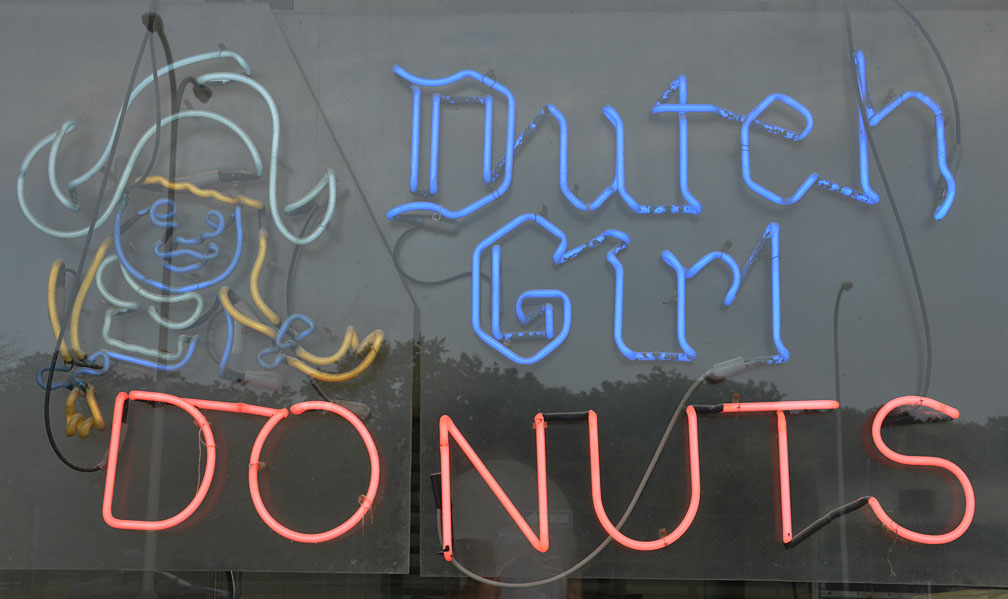 A couple wonderful camera signs —  both businesses gone.   If you’re into the camera theme, I’ve got a page of signs here:
http://www.agilitynut.com/sca/cameras.html 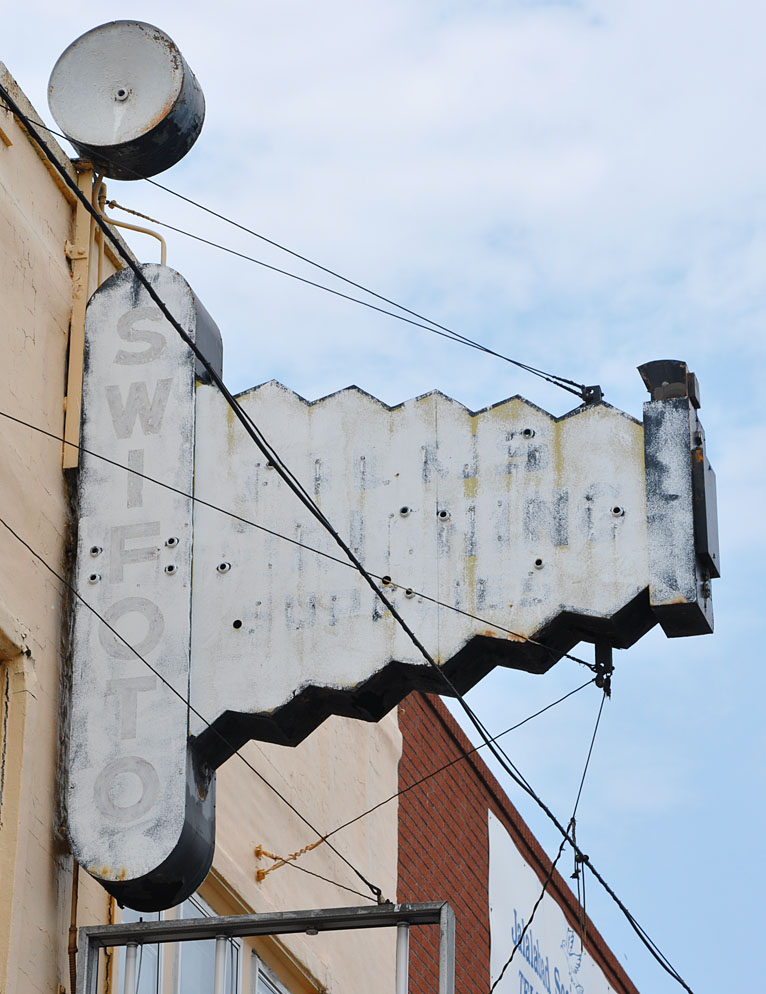 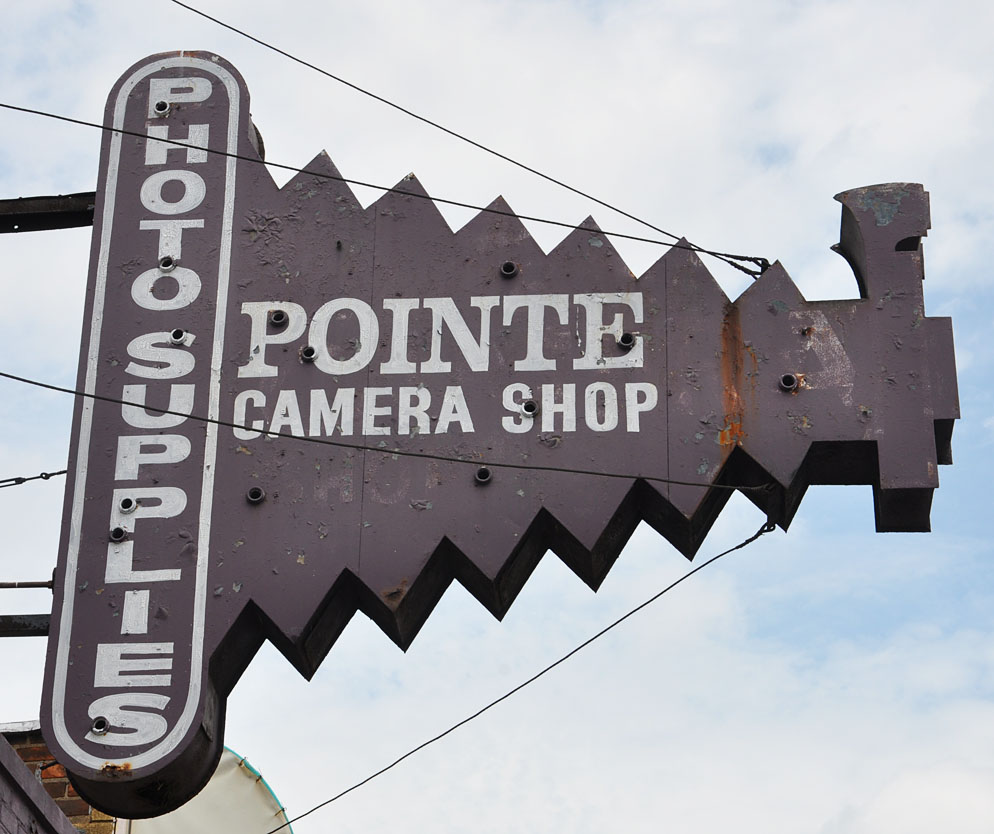 Wish I had had some sun for this one: 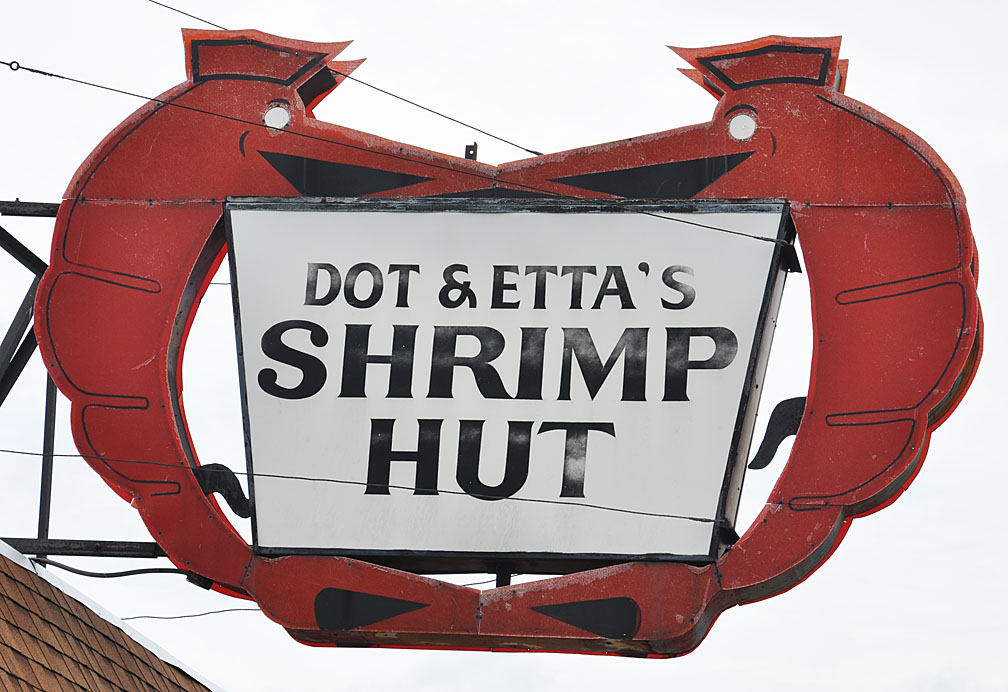 Not much left of this “Norge Ball” unfortunately.  More examples & info about these signs here:
http://www.agilitynut.com/signs/norge.html 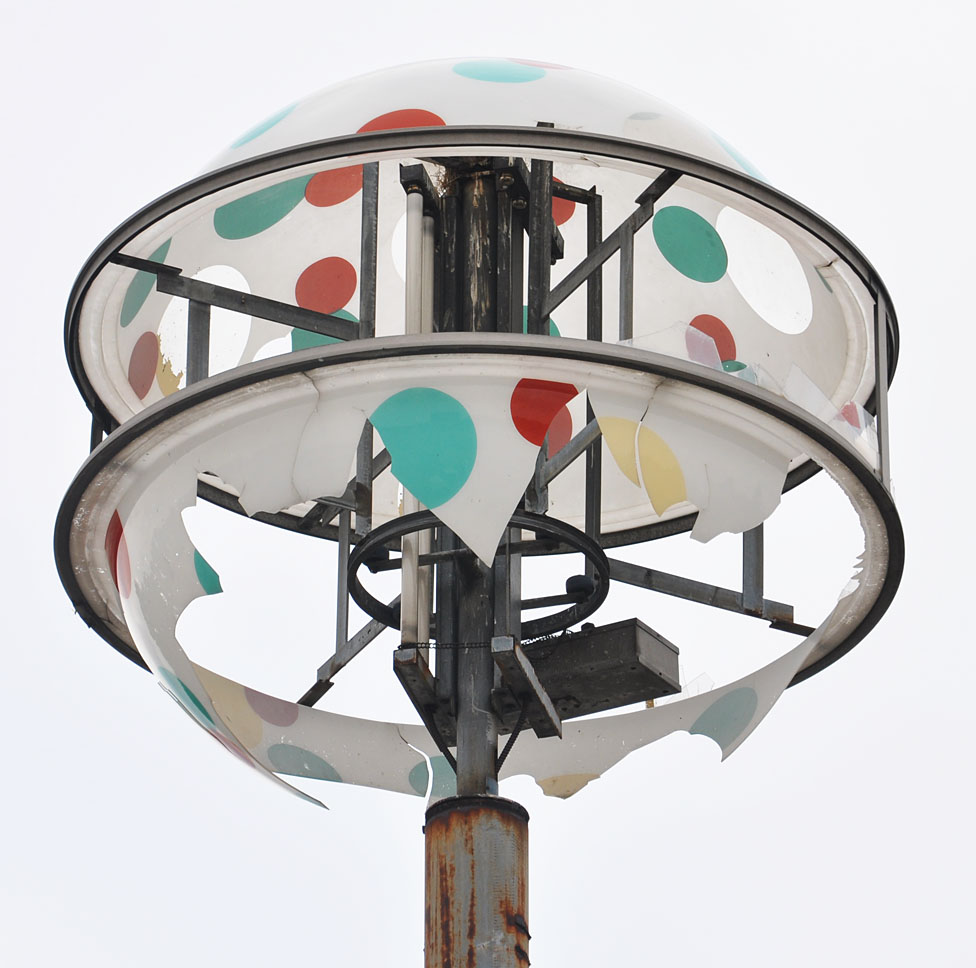 At the Schoenherr Poultry & Fish Market : 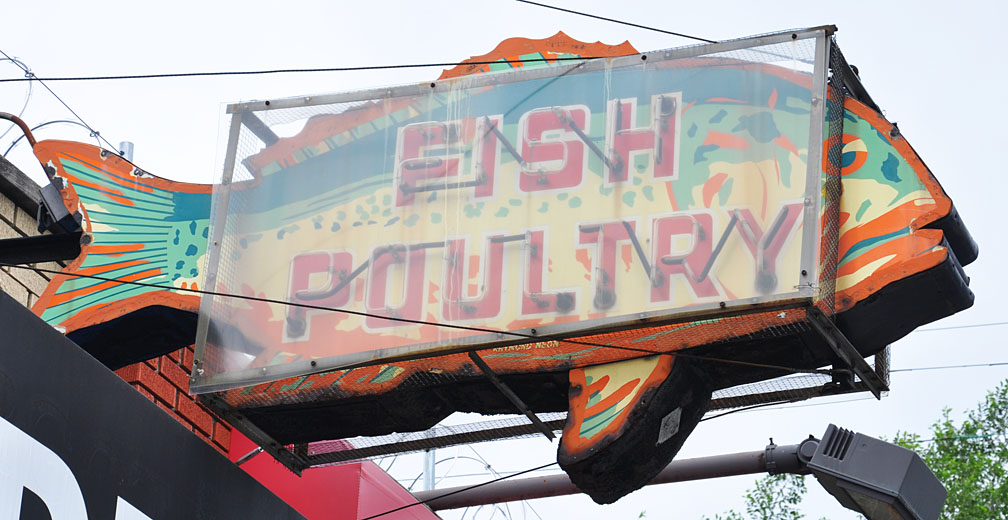 The coolest discovery all day.  A mid-century oil change place which I assumed was probably a bank or church originally.  But no, I’m told it was built as a muffler shop.  There are 12 bays set around a turntable in the middle.  The cars would be driven to the center and then spun by the turntable to point at and be driven into the desired bay.  Does that make sense? 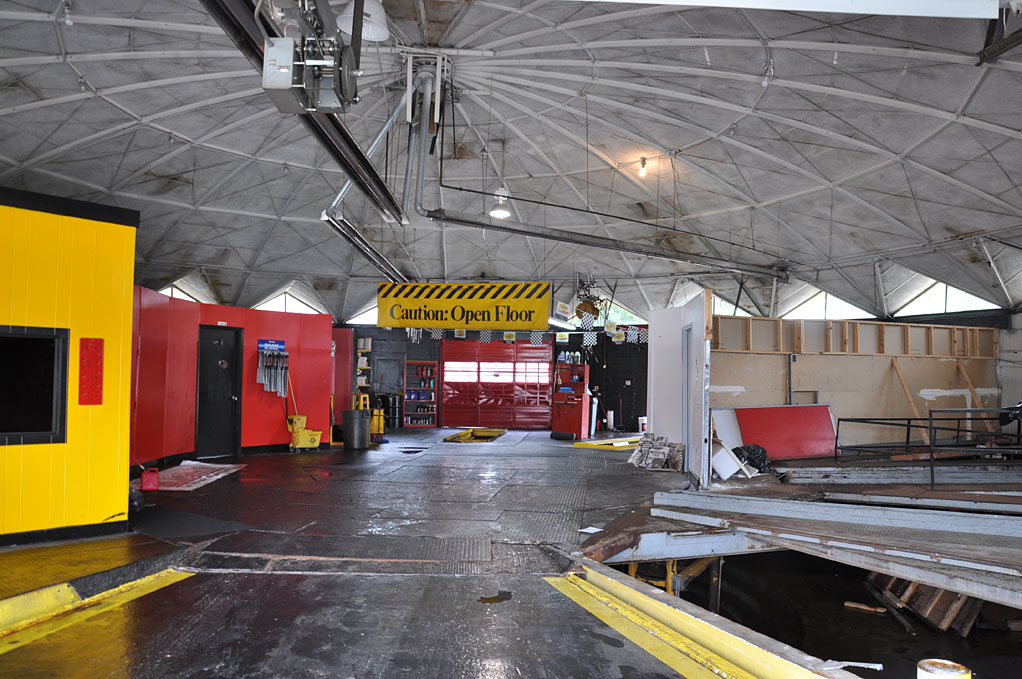 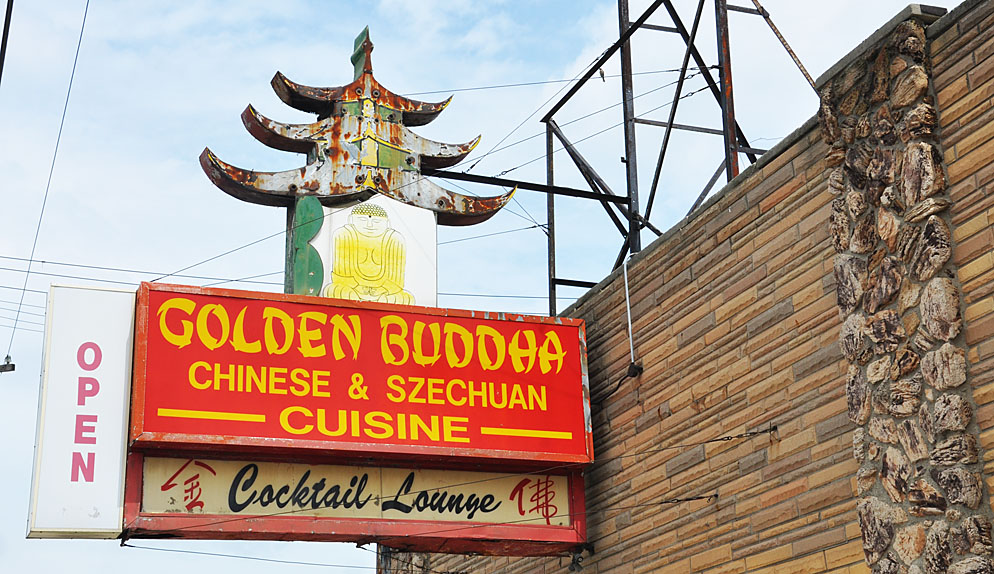 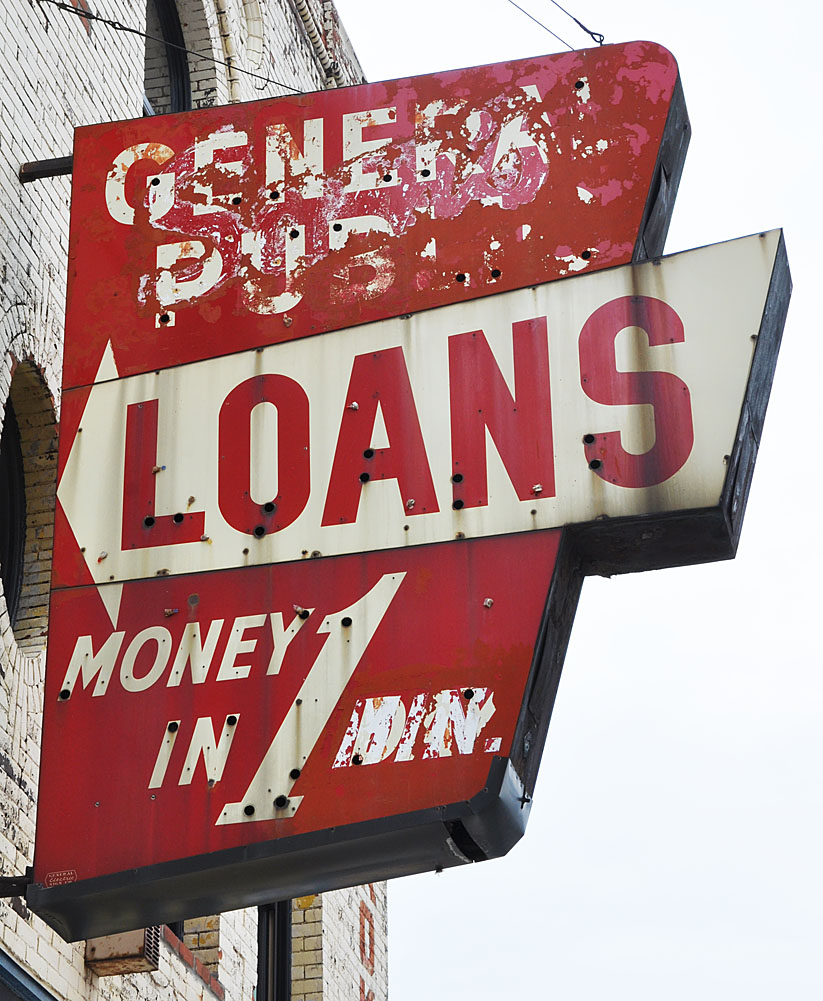 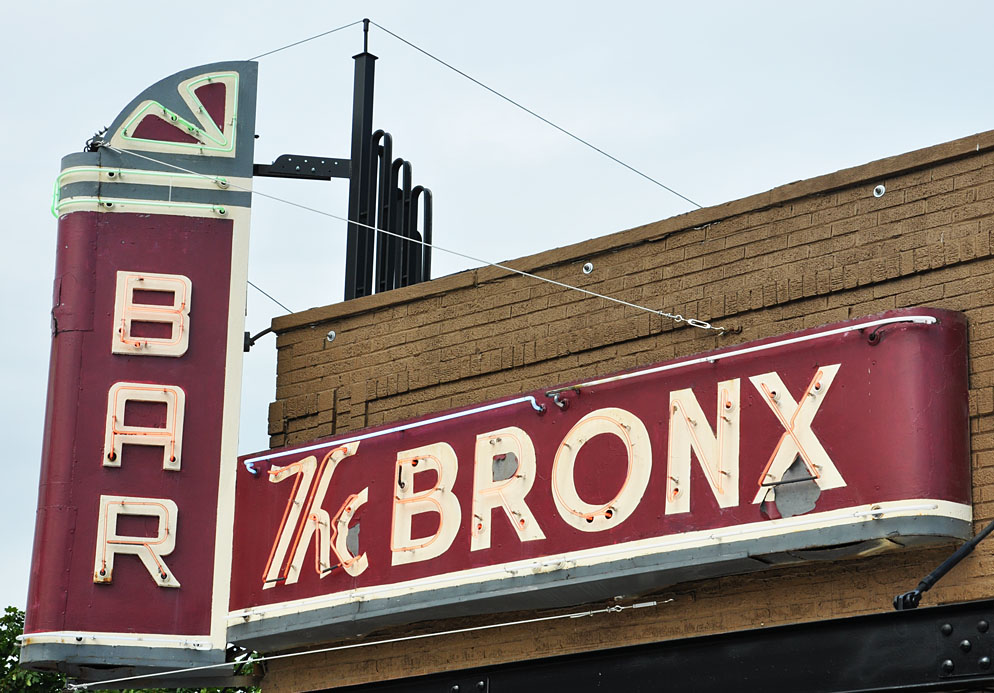 A tacker-on-er sign to the Flamingo Motel in Fraser.  The era of hot tubs and wife-swapping: 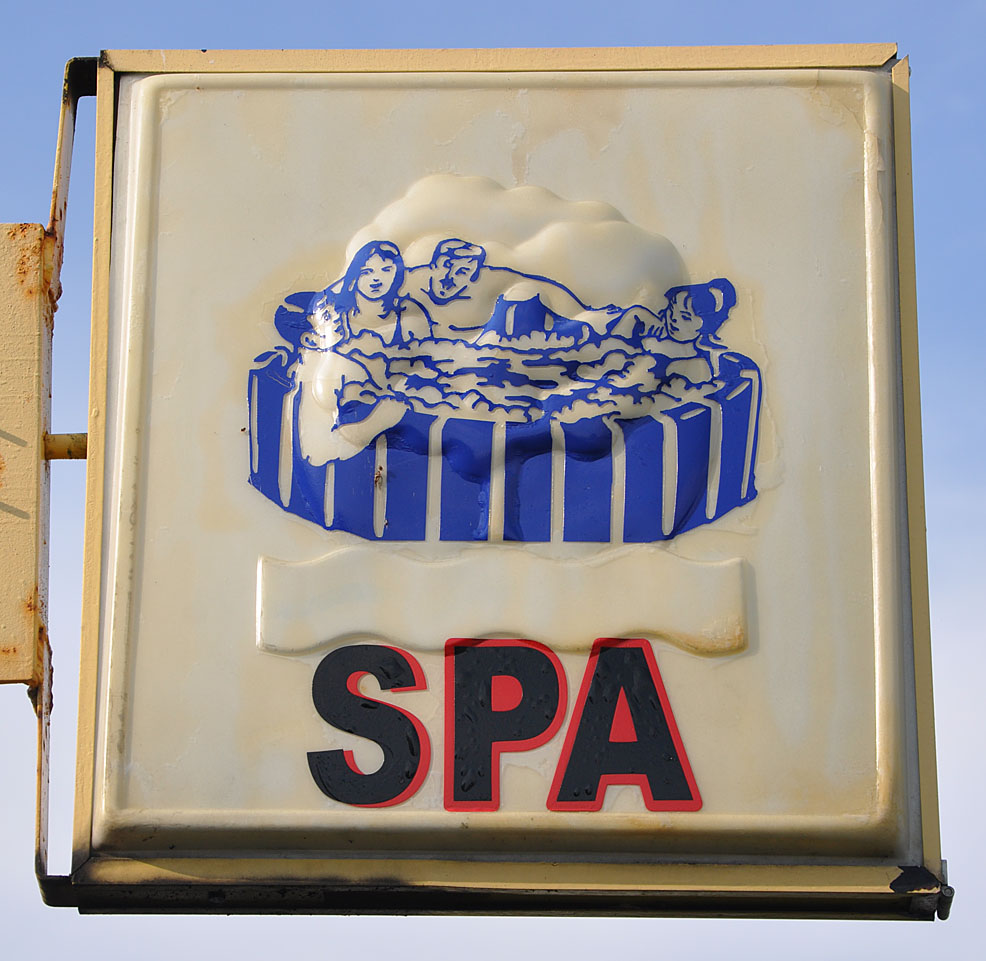 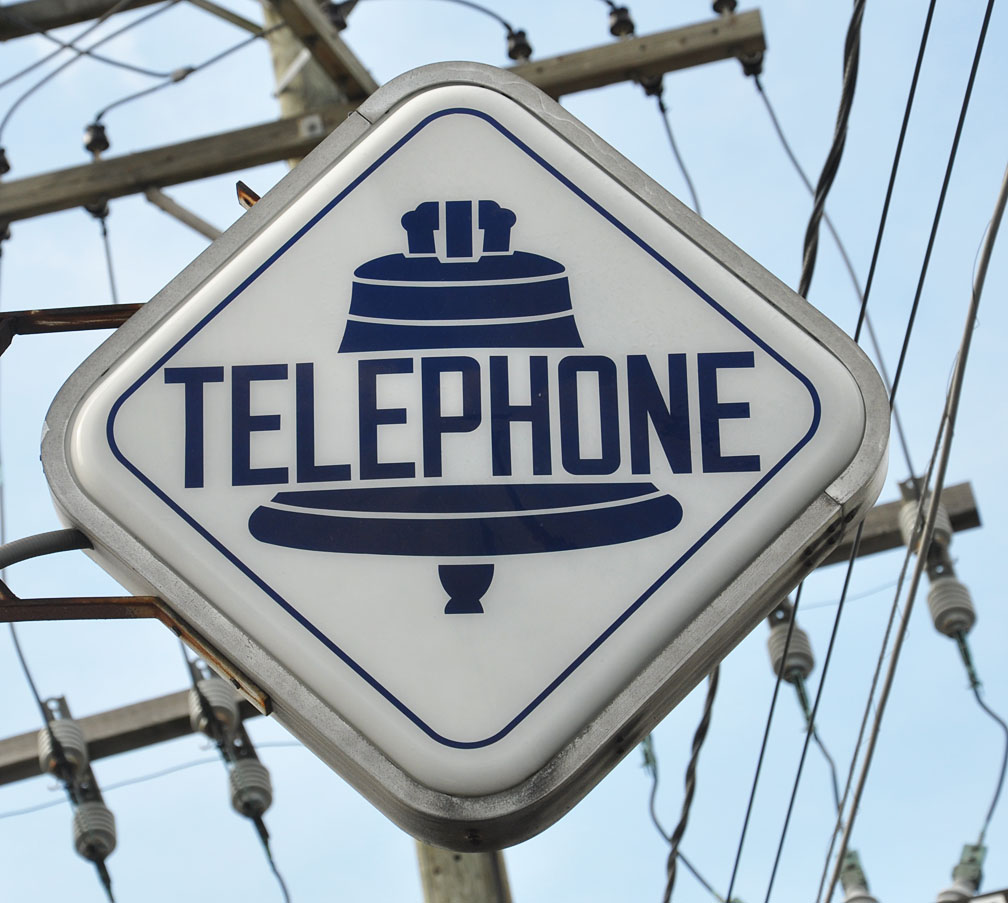 So, at this point, the entire state of Minnesota is a big question mark.  I’m determined to get Michigan done despite the hurdles.  Please pray to the gods of auto repair for me.

8 thoughts on “Day 7: Highs and Lows in Detroit-ish”