OK — so maybe some not so itty — but certainly much smaller than Houston.  And not so much directly south.  Lots of westward movement.  But we are on a southward plunge.  Back to the beach bay-bee!  But this will probably take me longer than it normally would.  Finally, Sparkle’s check engine light came on.  Or as she puts it “service engine soon”.  Which is a good thing!  Hopefully, this stuttering behavior can be identified and fixed.  Since I know the problem well from Fort Wayne last summer, I did not panic when the light came on.  At first I tried to find a garage — but no dice, on a Sunday, esp. not in remote central Texas.  So I just got used to the amber glow and kept a constant eye on the oil pressure &  temperature gauges which did not budge.  The bucking was worse in the morning but got better-ish as the day went on.  I’ve already got myself stationed in a city (Victoria) with a Chevrolet dealership that opens at 7am.  But I know how these things go.  They might give me a story that they can’t even look at it til Tuesday.  I will try begging.  Maybe crying.  Maybe even bribery.

As for my health, if you’re interested.  The barfing has stopped and the illness has now progressed to the other end of me.  Which has made for some stressful moments and sheer physical stamina heretofore not been tested.  I ate half a plain croissant for breakfast.  Maybe not a good idea since that wasn’t in me for long.  Way more than you want to know!  But I didn’t let the inconvenience wreck my day.  How many people can say they lost weight on vacation?  I was determined to get as many photos in as I could because I might be stuck in a garage for a day or two.  Perfectly enough, this Chevy dealer, if they’ll have me, is right across the street from a McDonald’s where I can get free wifi and stay in touch with you all.  There’s also a big grassy field behind the building so I can entertain the kids.

So, sick car, sick me… and I got my first (hopefully, my last) speeding ticket of the trip.  It was really not fair!  Coming into Sealy for a one-stop-shot of a fairly boring theatre.  Speed zone changes from 55 to 35 pretty quick and I got radar-ed at 49.  Just seconds after I made an emergency pit stop at a McDonald’s.  So not right to pick on me when I’m at my lowest.  First thing the cop said was “are you having a medical emergency?” which really gave me pause.  How could he know?  No, of course he didn’t.  He just wanted to see if I had an excuse for speeding.  I only said that I hadn’t noticed the sign and just then noticed things had gotten more downtown-ish and slowed down.  He showed no mercy.  But when I think of how much “excessive speed” I’ve been doing, this is really inconsequential.  Folks drive REALLY fast in Texas.  Like 90 on interstates where the limit is 70.  Even the country roads have a 70 mph speed limit.  This is getting me probably a dozen more cities in per day.

Let move on from the hardship and onto what it’s really all for.

From Navasota:  a simple but stunning blade sign for Miller’s Theatre.  The beaten-down Masonic globe sign in the background is not attached — just looks that way here:

From La Grange — the Cottonwood Inn.  I’m sure this must’ve had a nice sign at one time — now just the standard plastic box:

Another in Schulenburg.  I think this is too tiny to have been a gas station.  But I have no other explanation.  It’s set back from the road, on the commercial strip.

From Columbus.  Oil derrick reference?  Never seen anything like it:

From Eagle Lake.  Usually these Masonic signs embedded in the buildings are just done in relief.  While loads of Masonic neon signs still out there —  I’ve never seen an embedded one like this decorated with neon:

From Eagle Pass comes this mystery building du jour.  Could this Dairy Delite be a severely altered Sandy’s Hamburgers (or copied their style a bit)?
http://agilitynut.com/eateries/sandys.html

I asked the current owner that was there but he knew nothing about its beginnings.  Only that there is another location in Sheridan.  I didn’t get a chance to go — but glad I didn’t since checking at Google shows it to be just a boring boxy building.

This Firestone sign was especially interesting to me since their signs are always red and white.  I’ve always been looking for other blue examples of Firestone signs or buildings to explain the supposedly-original blue and cream Firestone building in New Albany, IN:
http://agilitynut.com/tires/fin.html 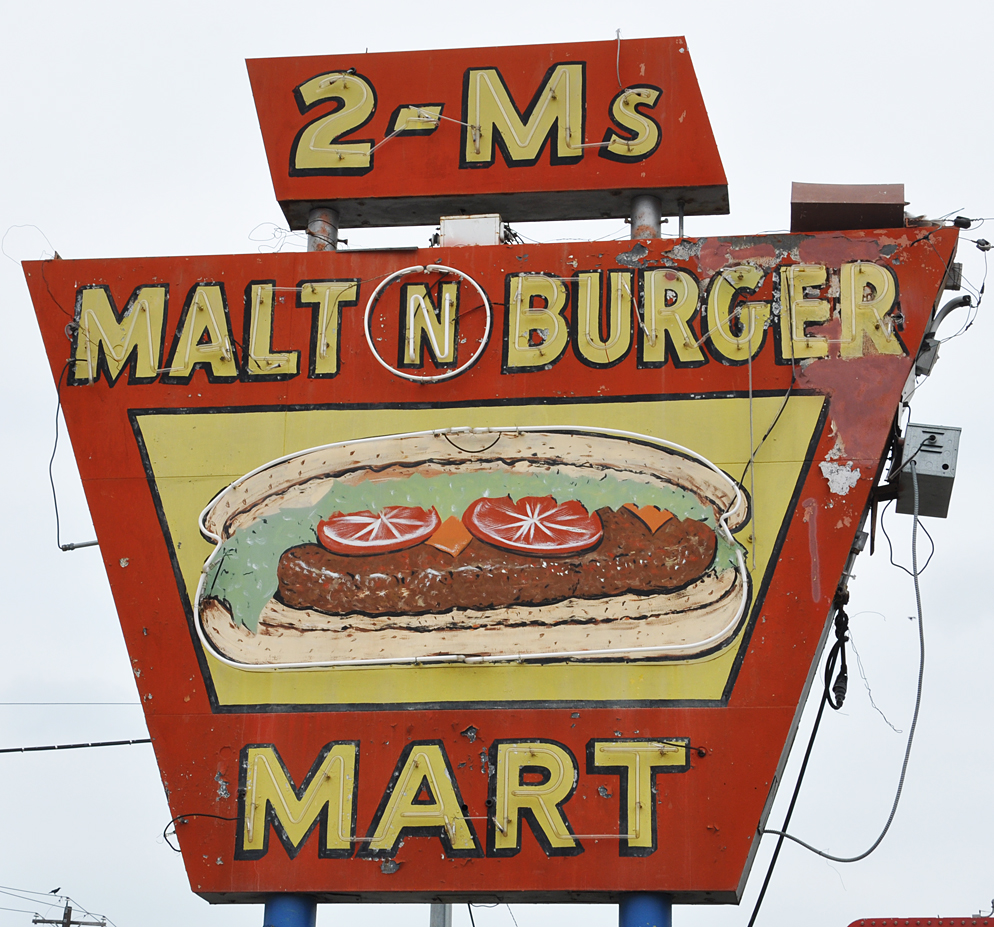 A faux lighthouse from Rosenberg — to join the others when I get home:
http://www.agilitynut.com/mim/lighthouses.html

OK, are you still with me about Robo-Washes?  I found another today in Rosenberg at a used car lot.  Note the track & plastic paneling around the roof.  No sign here though:

and just in case there was any doubt — the embossed name:

and lastly — this is what the next map looks like after the dogs have been playing in the muddy Brazos River.  Good thing my upholstery is a browny shade of grey!  Luckily nothing bad happened with them today.  Okay, so yes, I’m driving with half a hand and shooting with the other at 65 mph.  Something wrong with that?  Note the soothing amber light beneath the radio of Sparkle’s desperate plea for help:

Once we get moving again…  we should be passing through Corpus Christi and hopefully arrived at the tippy tip bottom of Texas.  After that, it’ll be a zigzag path back up through San Antonio, Austin, Dallas-Ft. Worth (and a gazillion little cities between all those).  Then I’ll have to assess whether we have to split for OK or whether we have time for points more west.

An extra long post tonight since I suspect tomorrow’s will be slim on photos.