A big day of driving and playing and sunning and shooting here.  The day started with the usual dismal grey skies but then segued into sun around 10am.  And it got hot for a change!  I think low 80s at one point.  I understand it’s snowing back home in NY — sorry to be missing that (not).

The dogs got to run on the beach.  Not like I had a choice really.  Nik was a screaming maniac when he spotted those crashing waves on the beach in Galveston.  Found a remote spot & cut ’em loose.  Grem found a dead dehydrated fish that I got out of her mouth fairly quickly.  Then she found some chicken bones which I did not.  Everybody got wet (including me) and the van got sandy – and I did not care.  Sparkle still has her mechanical “issues” but about 85% of the time, she runs perfectly fine.

Getting a late start here because I indulged the dogs at the end of the day for another good run.  The sun was waning anyway so I decided to check out a doggie park (our first one of the trip) in Sugar Land — the  “Pawm Springs Dog Park”.  As promised by the reviews, five acres and a big pond.  A good time was had by all.  This review talks about mud & such but everything was nice and grassy today:
http://www.doggoes.com/parks/texas/houston/sugar-land-memorial-dog-park

On with the photos.  Well after midnight and I’m beat.   This gas station sign in Beaumont has been repainted since I saw it last in 2006.  Then: 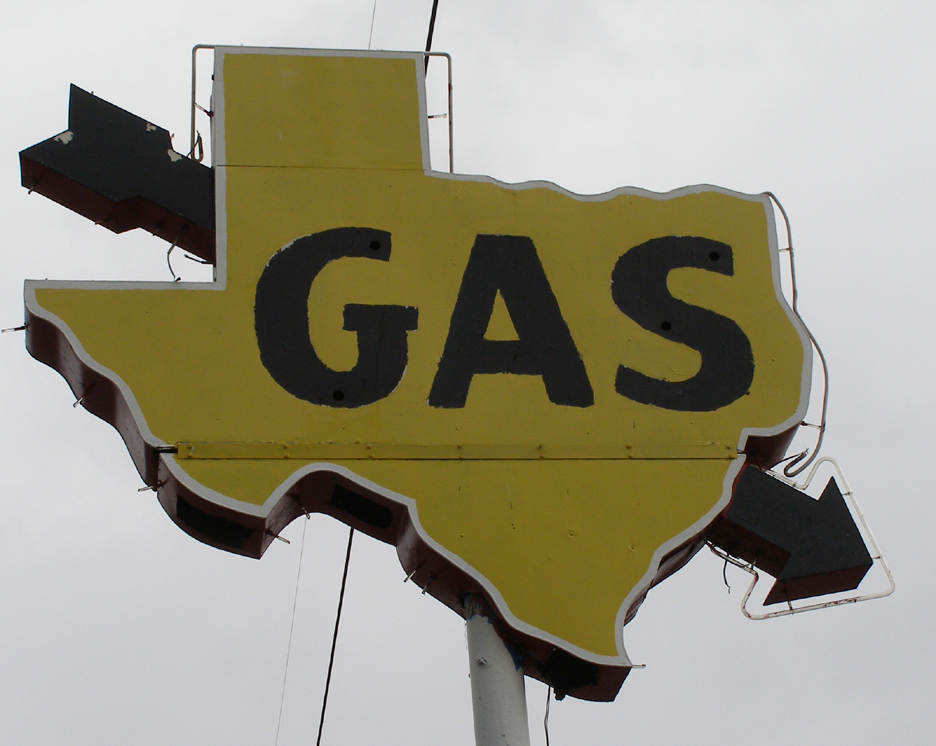 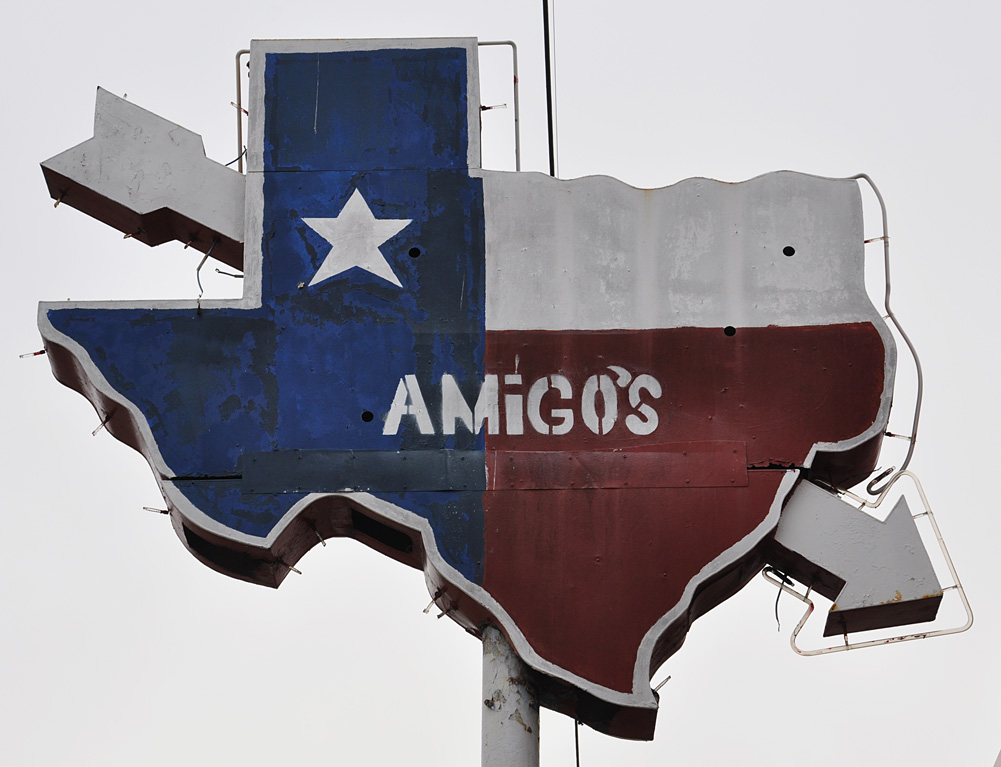 Still in Beaumont.  I really don’t know the story about why this sign is mounted sideways.  The hotel’s been abandoned for years.  This is, need I point out to my loyal fans, an opal glass sign.  Translucent letters that were lit from behind by bulbs, yadda yadda. 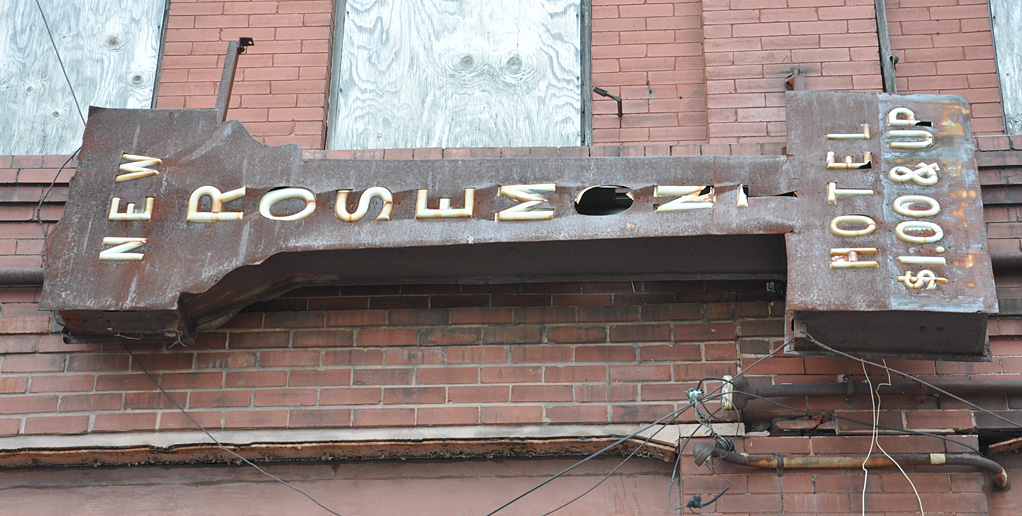 I’m koo-koo about these glass letter signs.  Very, very few of them out there.  Keep your eyes peeled for them and let me know if you find any!  As luck would have it, just a few blocks away, I found another one in Beaumont.  This was one of the best surprises of the day.  The letters are in perfect shape — even more rare: 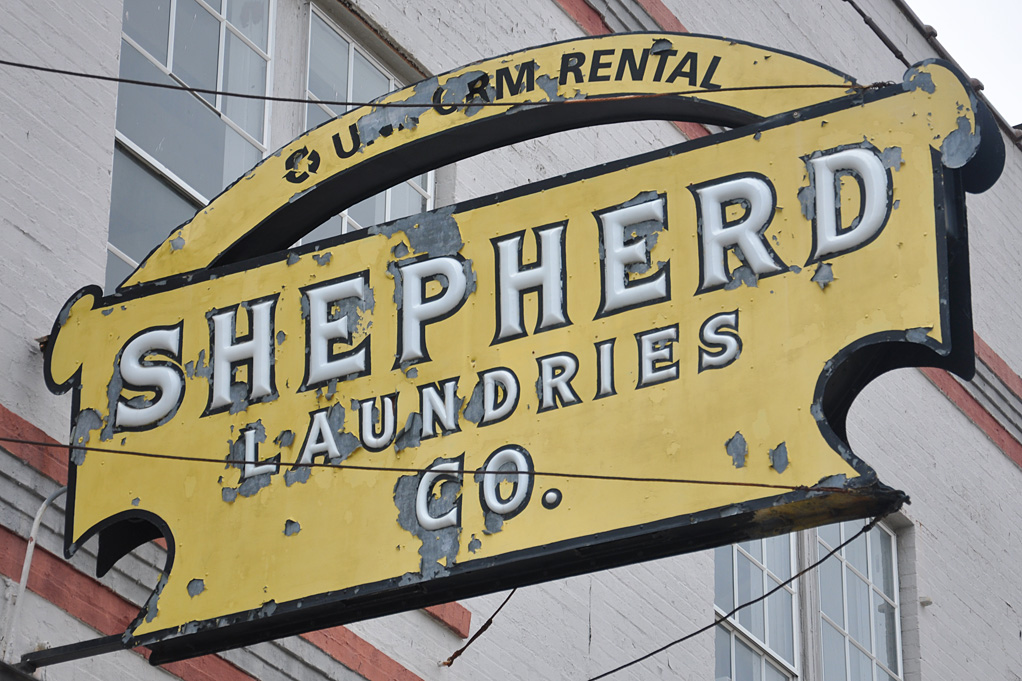 I tried to find “Swampy” in Orange, TX a few years ago and gave up.  A photo of him from the TX Roadrunners site from 2005:
http://www.txroadrunners.com/images/pics/GemTrailsOfEastTexas2005/Orange/Swampy.jpg

Doing more research, I found I’d been looking in slightly the wrong place.  Finally found him this time!  Well, what’s left of him anyway.  Disassembled and missing all that Spanish moss that made him so charming.  The guys there said they might fix him back up again some day.  It looks like he might even have been animated! 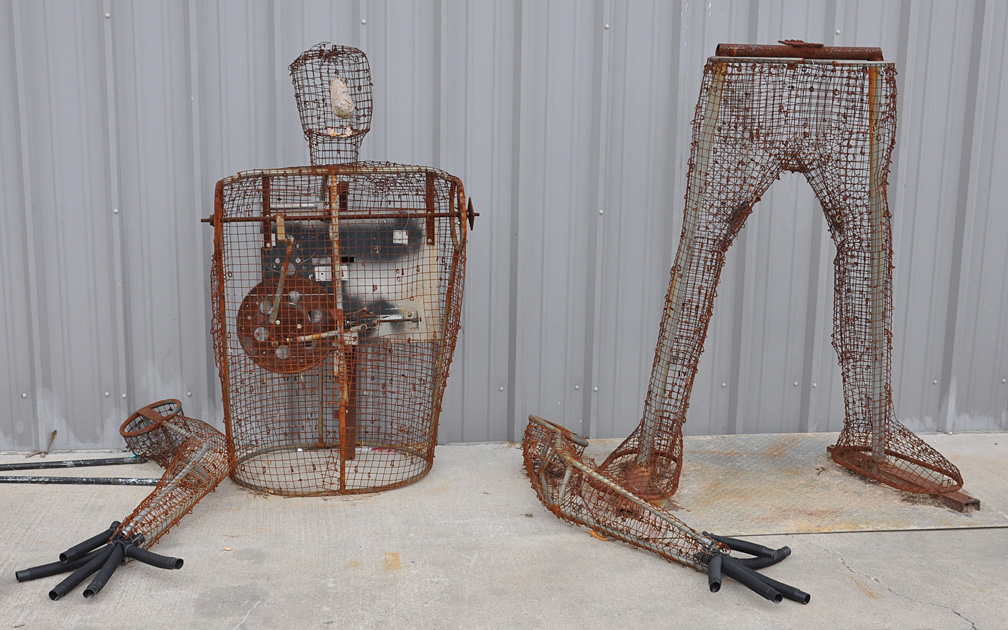 Let the guys know at American Airboat know how much you want to see Swampy brought back to life!

A couple shots from Port Arthur: 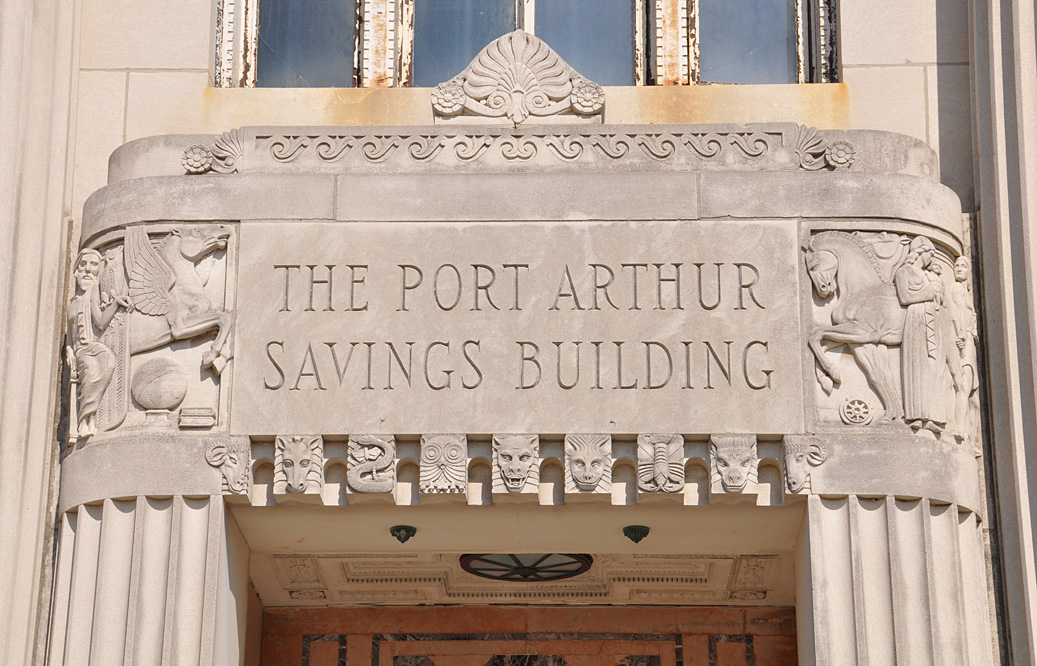 Some Art Deco from Baytown (I’ve no idea what this bldg was originally): 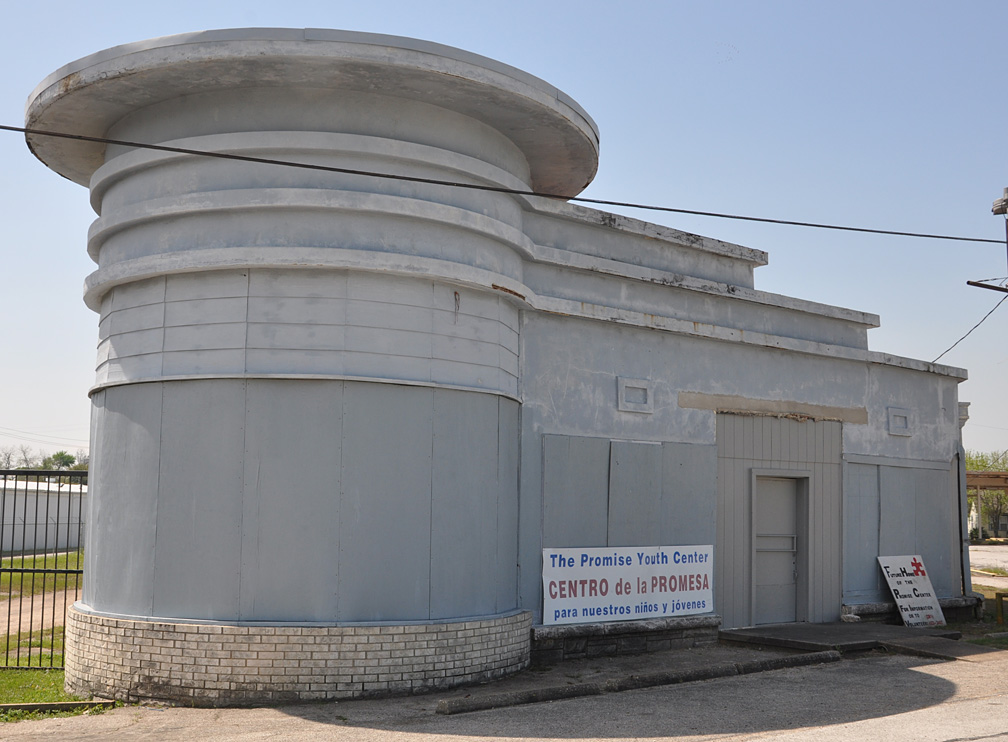 The sun was great by the time I got to Galveston.  I’d like to tell you some good news about the Martini Theatre — but I can’t find any:
http://cinematreasures.org/theater/19217/
and
http://galvestondailynews.com/story.lasso?ewcd=60e00eadb3913868 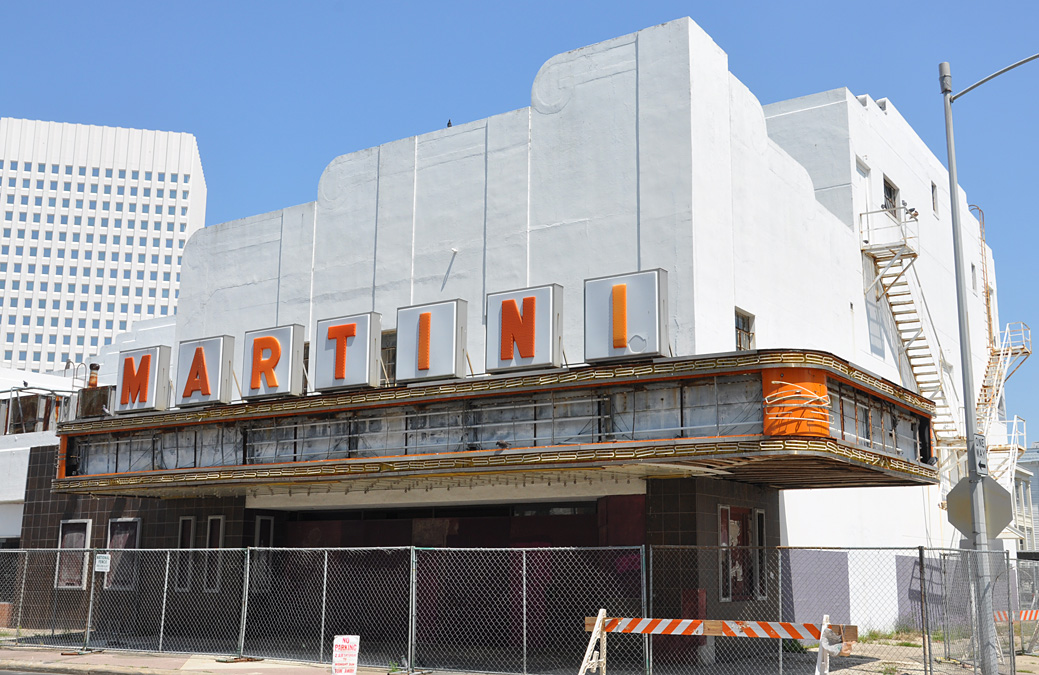 More Galveston.  This store is long gone — but so glad the sign is still there: 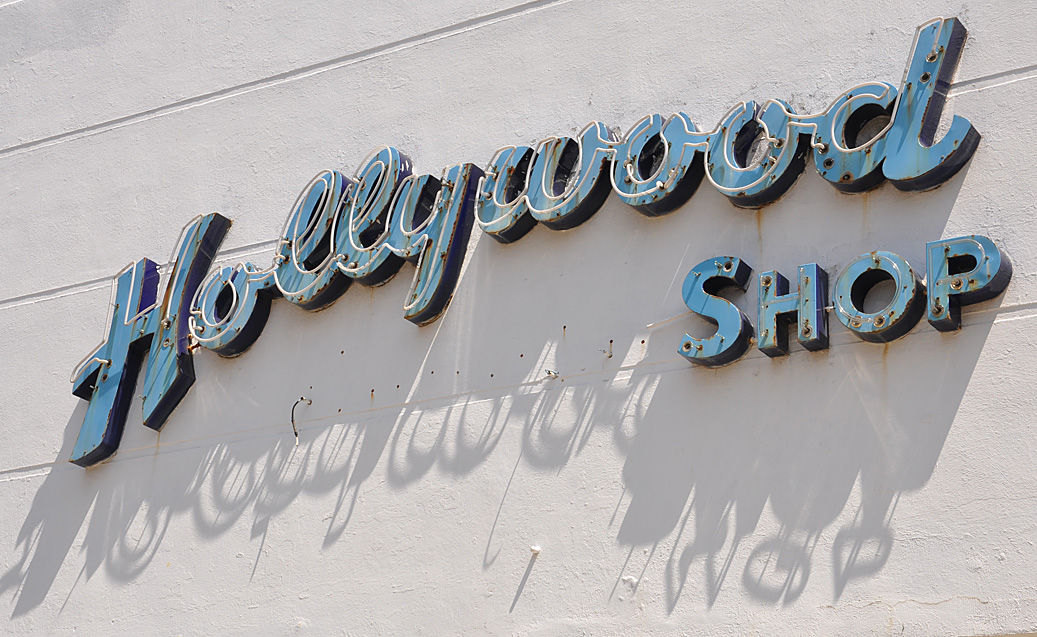 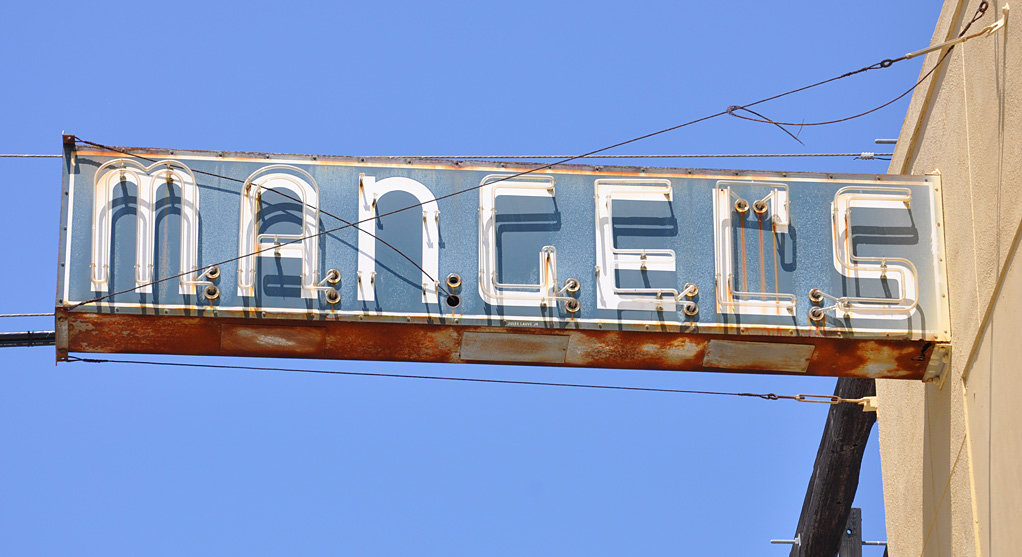 At first, it was the Great Dane statue that caught my eye.  And at that very moment, the real-deal “Hunter” came outside.  The woman (owner of dog and statue) began dressing the statue for Easter.  Rabbit ears were soon to follow this necklace.  I asked if “Hunter” ever jumped the fence.  Just once to see kids at the school across the street and then he stood there like “now what?”.  Never has done it again. 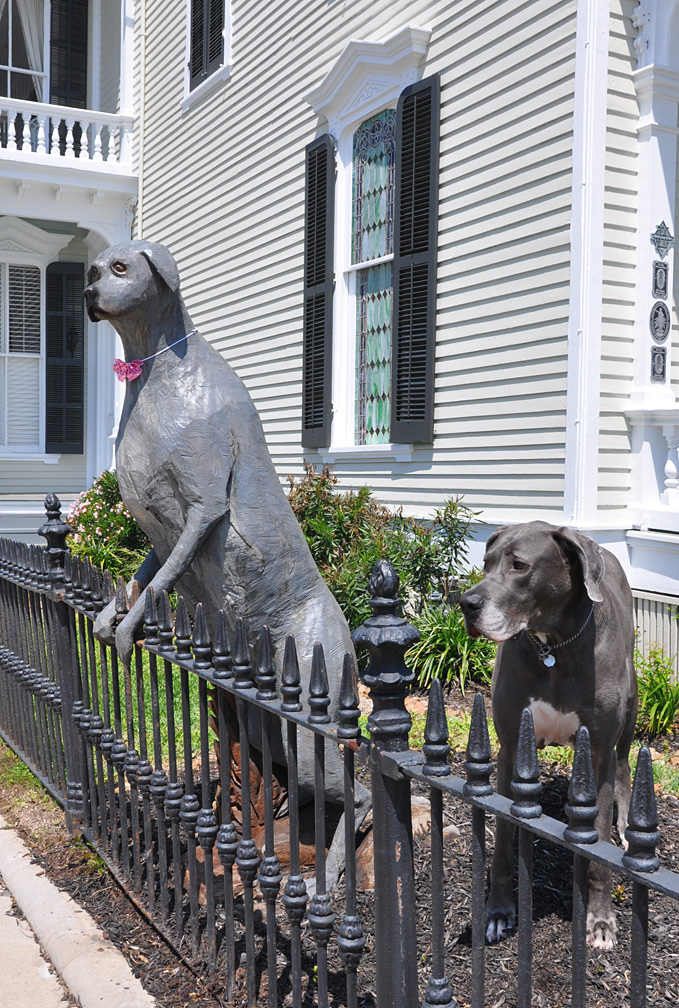 Still in Galveston.  Love the colors and shapes.  Across the street from the beach:

This grotesque and tacky statue has been around so long that he’s growing on me.  He’s been here since at least 2005 and probably much longer than that.  “Surfboard Shark Man” is cement and has withstood a few hurricanes.  So that alone makes him an important local icon: 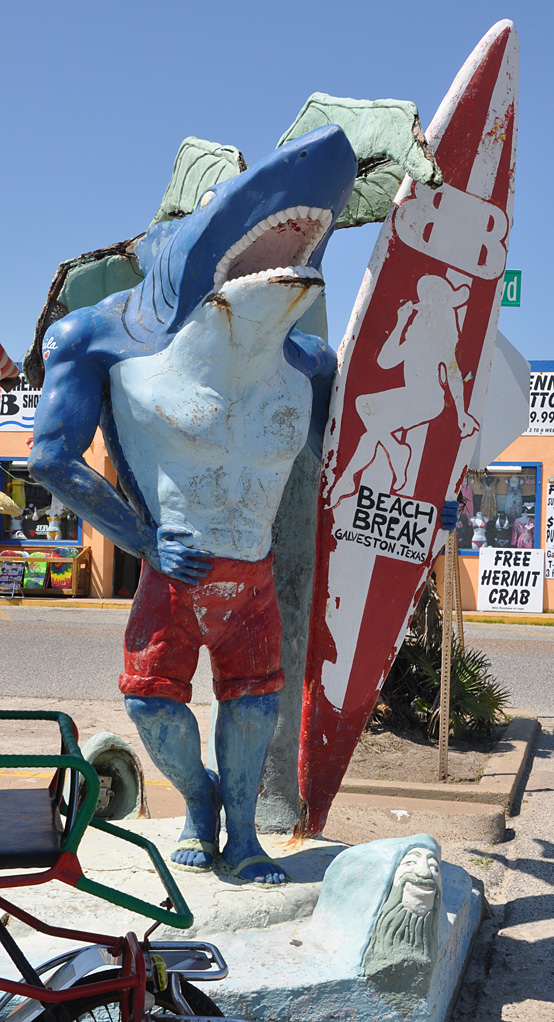 One more for the night from near Houston.  This sign is in Stafford.  I passed the sign at night later on but couldn’t get across the crazy fast lanes to shoot it again.  The sign is lit by the bulbs from above — and the light in the wheels are lit in a chasing pattern making them appear to spin.  What an old-fashioned thrill! 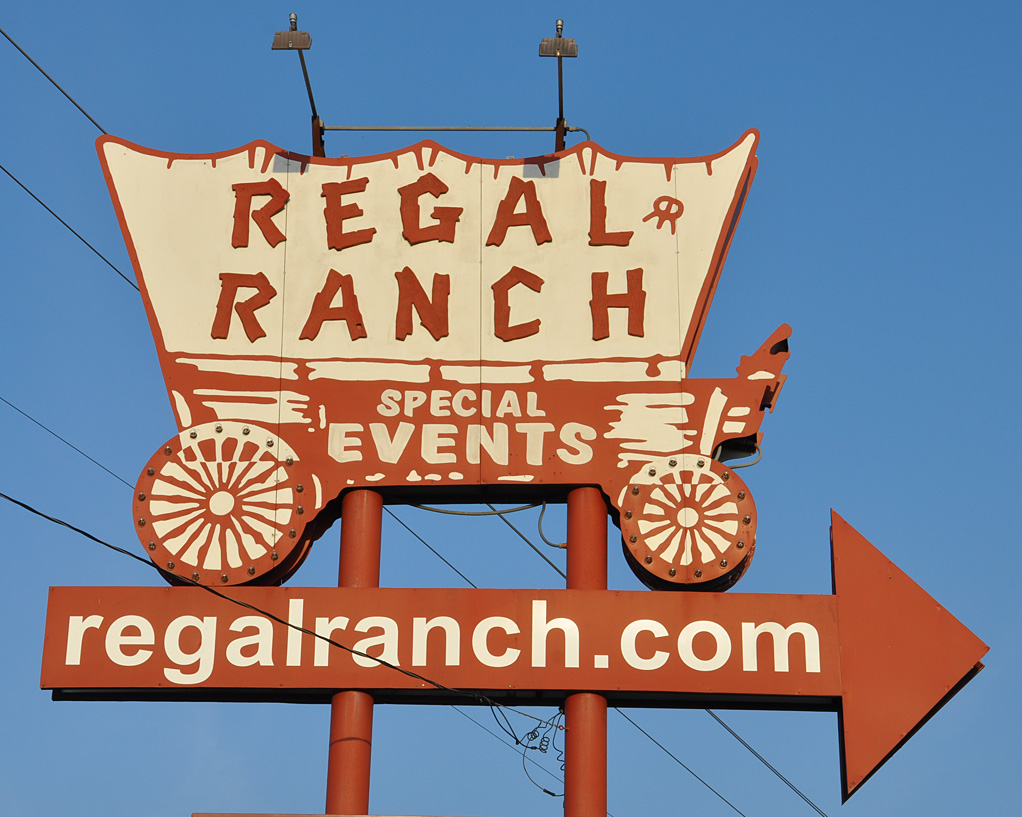 We’ll be tackling Houston tomorrow.  A big packet of paper-clipped, heavily-dotted maps.  With Sparkle’s cooperation, it should be a prolific day.  The forecast is “sunny and warm”.