The “bumps” would be the illness that Sparkle still has.  Like an annoying sneeze.  She’ll go for hours acting normal, then act like any moment she’s going to break down.  Her sickness was most apparent this morning.  Then maybe 5 hours went by with total normalcy.  Then some intermittent bucks for no particular reason.  Not accelerating, not on a hill, not a particular speed, no clue.  The idle seemed pretty much fine all day except for some in the morning.  I give up trying to figure this one out!

I just hope she hangs in there tomorrow since it’s supposed to be gloriously sunny.  The “pops” are because I finally have some photos with color.  Around 2pm, the sun finally came out.  Grippie started panting since she’s the only dog with a longish coat — and it’s thick from NYC winter.  I got down to my tshirt for the first time.  Windows were lowered.  Dogs smelling bayouesque mucky rivers here and there and letting me KNOW.  Ah, YES!  This is why we came.  Tomorrow, we should hit Galveston and I will find these buds of mine some white sand to run on.

On to the photos then.  While leaving Tyler this morning, I was thrilled to come upon this building. I only know of one in GA & a few in  CA that are left.  This was originally part of the Dari-Delite chain.  Surely, there must be more of these quirky a-frame buildings out there so keep your eyes peeled.  More info & photos at the bottom of this page:
http://www.agilitynut.com/eateries/chain.html 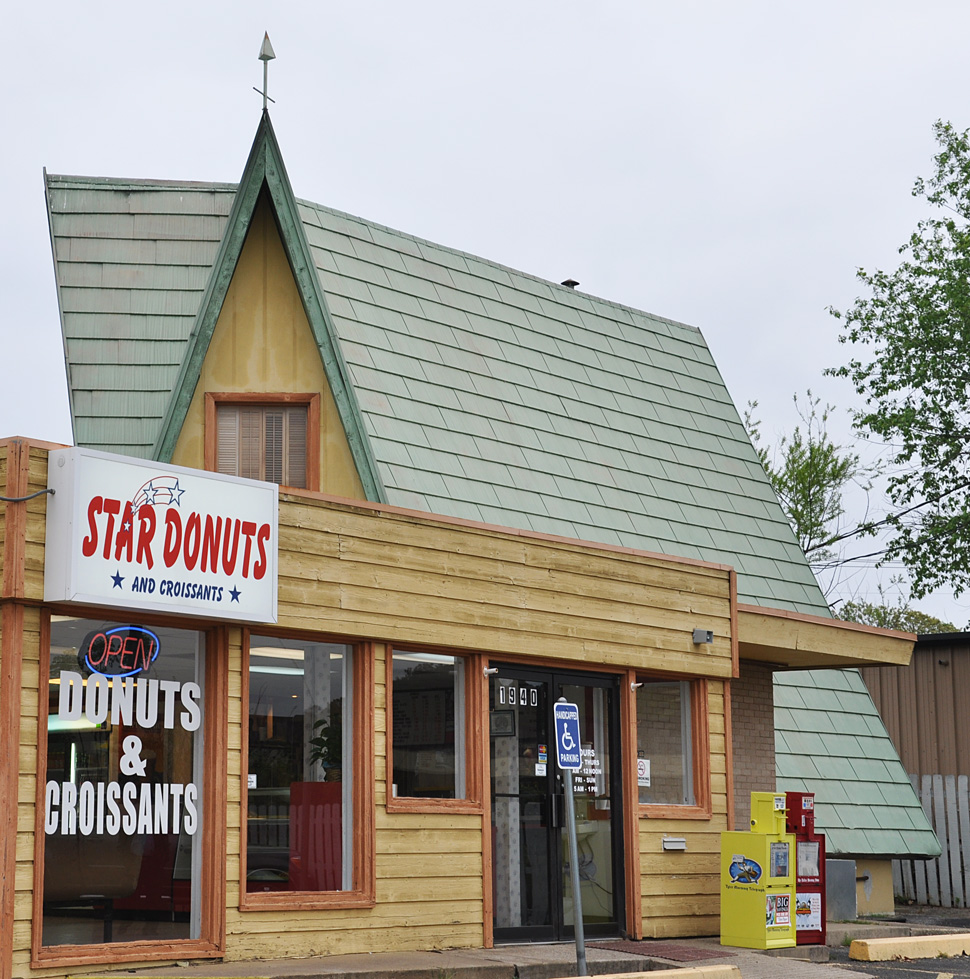 (Yes, I did get a couple donuts to show my support.  But they were really bland & not very photogenic.)

A mystery solved.  This building was on my list and I had forgotten about it.  “Kickerz” (coffee shack) in Whitehouse.  So that’s what that other hat-building was that I posted at Flickr last night.  Evidently, there is one other out there in Gresham like this.  Only the Tyler location is closed.  Another location near some hospital that is newer & not a hat.  These buildings are modern — chain started 2003-ish.

‘
Here are a couple signs from Palestine: 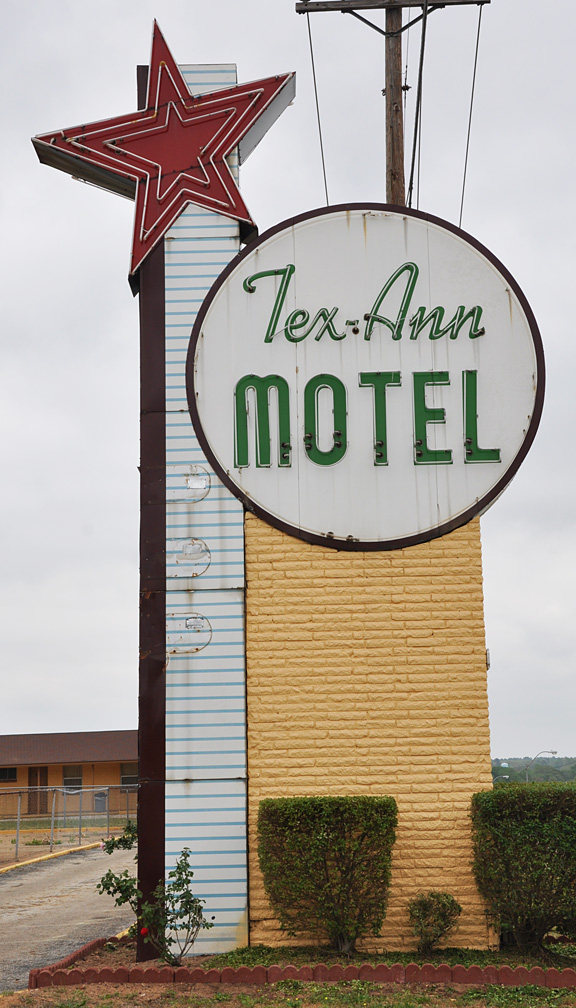 In Henderson — maybe this was an omen of things to come?  At the Tans & Hands Fitness Center:

I went in this lovely florist shop to ask about a sign I could not find (and it seems is now gone).  This place was originally a jewelers, from the 1920s.  Rayford Florist moved in around ten years ago.  The owner replaced some of the broken vitrolite (or maybe Carrera glass since it’s black) which came from Thibodaux, LA & cost a fortune.  The interior still has the original 1920s fans.  And some nice wooden display cases from the 1940s.

This chicken sign is from Center.   ETPS stands for East Texas Poultry Supply. 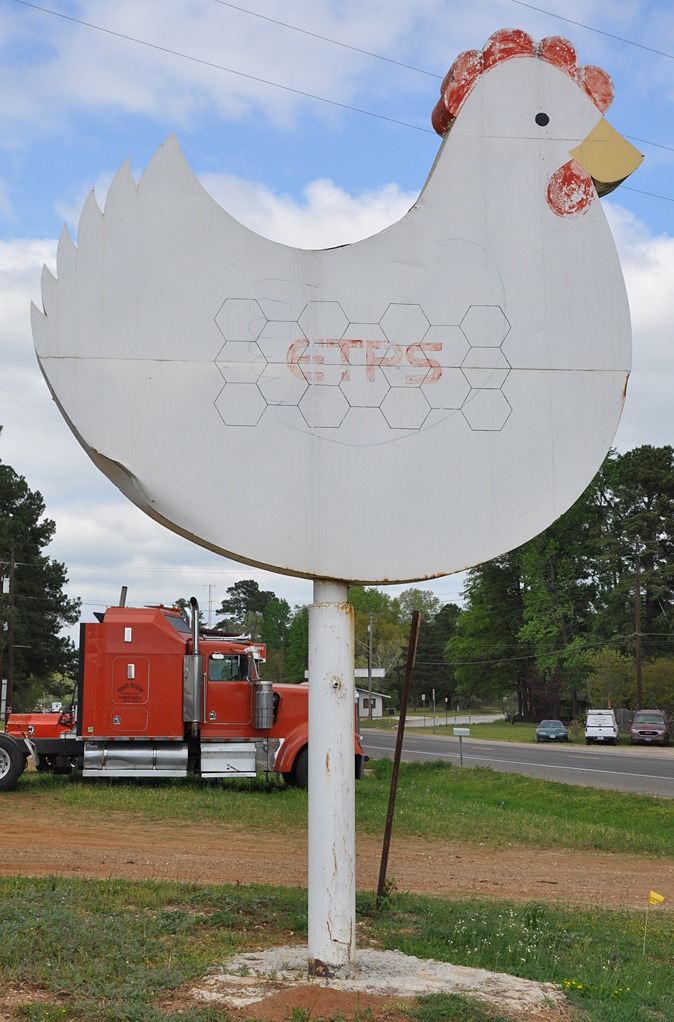 This one is from Nacogdoches.  This is supposed to be a portrait of the owner.  It doesn’t look like they are selling produce anymore though.  More of an open-air junk shop.  Unless the produce is brought out on weekends. 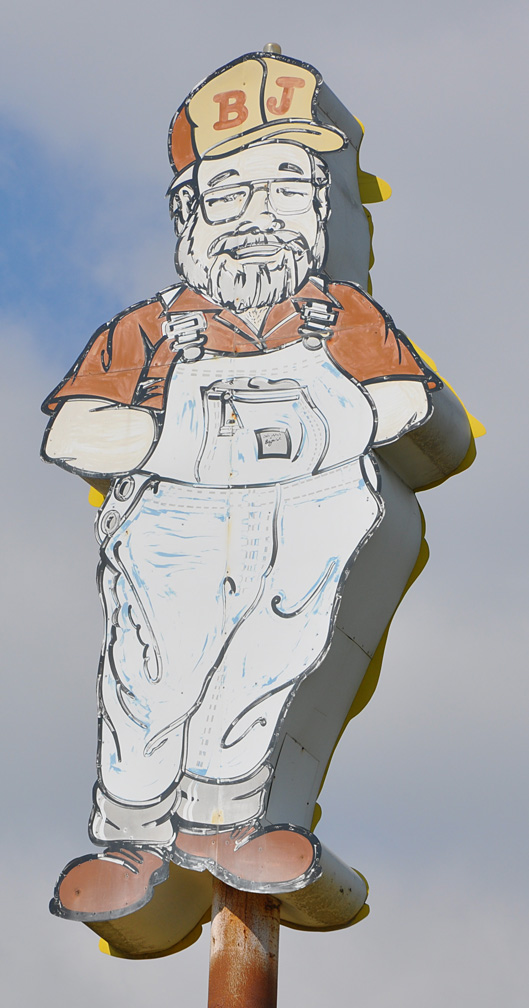 This one is from Lufkin where there was both Sun and Pines.  Lovely pine trees around this part of Texas which I didn’t expect. 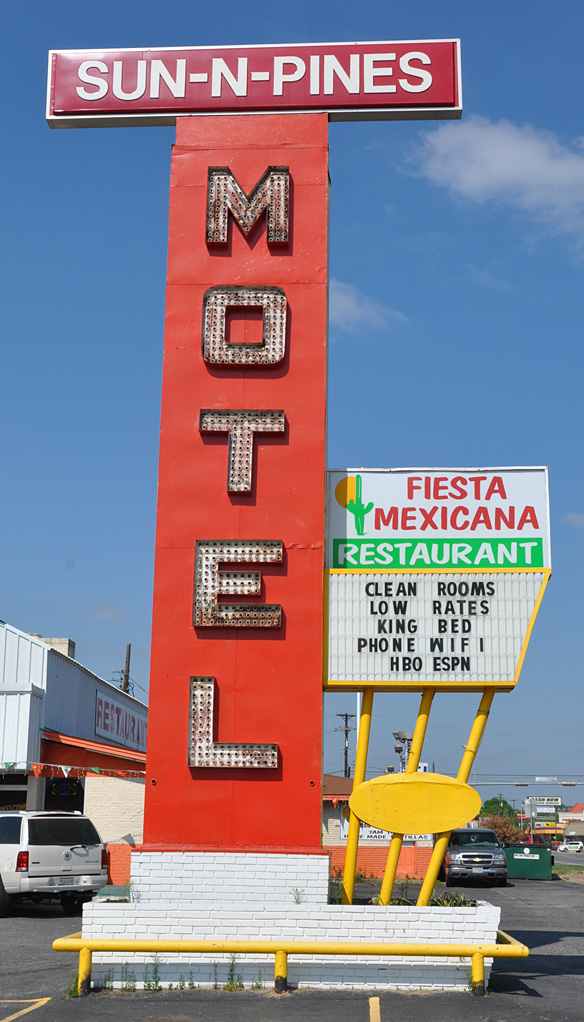 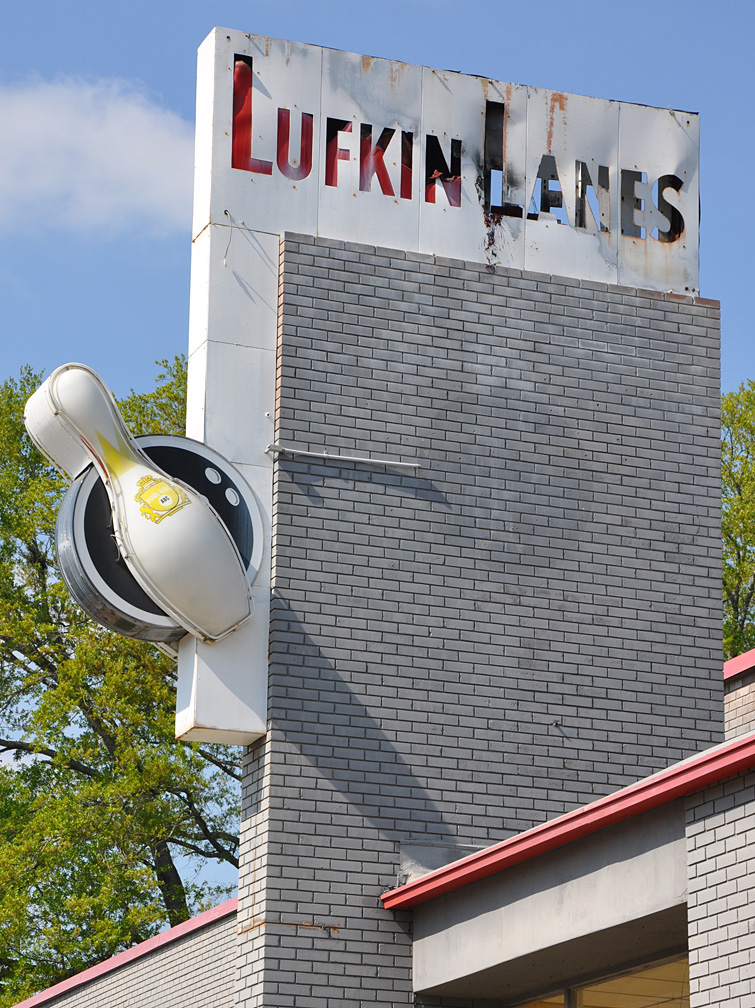 I posted the glamour shot of this theatre over at Flickr tonight so here’s a close-up of the sign which has recently been restored:
http://www.ci.lufkin.tx.us/ms/pinestheater.htm

… and what they’re doing to the inside.  The City is spending more than $1 million to restore the theatre.

Food — as promised.  Since those donuts sucked both taste-wise and aesthetically, I was on the prowl.  Bingo!  I hadn’t expected that Valentine diner in Lufkin had become a bakery.  So I got a couple special cookies.  I’ll tackle the giant blackberry Linzer tomorrow.  I had the chocolate this afternoon which was great:

A couple more signs from Lufkin — sun makes all the difference:

And one more from Lufkin — at the Johnnie A-1 porta potty business… these neat storage or office building.  Those triangular parts apparently can be fitted with glass (or was it plastic?) as you like.  Neat!

Tomorrow, if Sparkle’s up for it, which I think she is, will be Beaumont, Galveston, etc.  Then we should arrive in Houston where we’ll be for maybe two days.  Think sun!