Where’d the sun go?  I was counting on Texas to break the grey spell.  But I think that won’t be til later this week.  Every wonderful thing I shot today would have been 100 times nicer with some light and blue skies.  Another time, retrace the miles, and hopefully half of this stuff will still be here.

Just as I prepared to leave Texarkana and head for smaller towns, a new mechanical problem.  At stoplights or parked and idling, sometimes Sparkle acts like she might stall out.  Not that bad but obviously not quite idling right.  But pulls out just fine, drives fine, shifts fine.  Except for sometimes, a mild buck, like you’ve run over something, and repeatedly sometimes when going up a hill.  Very much like the Fort Wayne ordeal I had last summer.  Oxygen sensor and some other sensor.  Three lost days on that trip til it was resolved.

So, I spied a Chevy dealer from I-20 in Texarkana and backtracked.  I described & demo-ed the problems for the head mechanic.  Basically, he said the problems weren’t really identifiable until the check engine light comes on.  There are too many things that could be causing it and the problems aren’t bad enough.  Besides, he wouldn’t be able to get to it til tomorrow.

After having driven all day, hundreds of miles, it seems the problems are only noticeable once in a while.  Haven’t gotten worse — if anything, slightly better.  Strange.  But I’m learning to live with the stress.  It’s not like I’m driving through the Mojave desert or in the wee hours of the night.  Most people would probably not even notice the problem.  So I will push on until something happens.  I just hope it doesn’t happen on a sunny day!

Dog report.   Everybody’s good.  Lots of longhorns & even buffalo to bark at today.  Nik got to entertain a pack of kids who were terrified of dogs at the beginning.  But after 20 minutes of throwing balls for him, they are probably asking their moms for a dog right now.  Nik’s goal is to have every person in America throw a ball for him at least once.  Will you help him with his dream?

On with the photos — lots of ’em!  Yes, the Rabbit.  Where to begin.  The Texarkana rabbit is a true roadside icon.  He’s been around since the 1940s and was one of those “pull-the-car-over Marvin” type devices.  As if the airplane on the roof wasn’t enough! 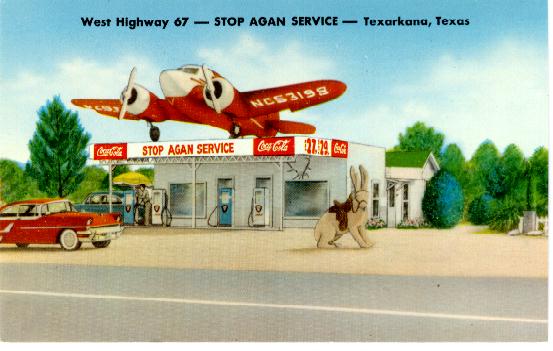 He wore a saddle so he could be used for photo-ops.  Originally, he was covered with fur.  Later, I’m zooming ahead here, the place was Big Daddy’s Pawn but the rabbit remained.  The last time I saw him was in 2003: 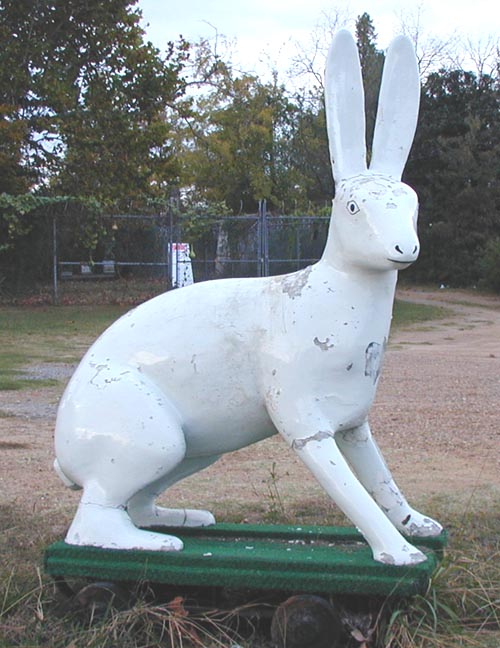 And then, he disappeared.  BUT, with some digging from my new pal mojavegirl, he has been found  We were able to rendez-vous with the living legend this morning.  He’s at a storage place about a mile away from his original location.  The owner is planning on restoring him, possibly with fur, and installing him in front of a hardware store.  He already has the new saddle ready to go. 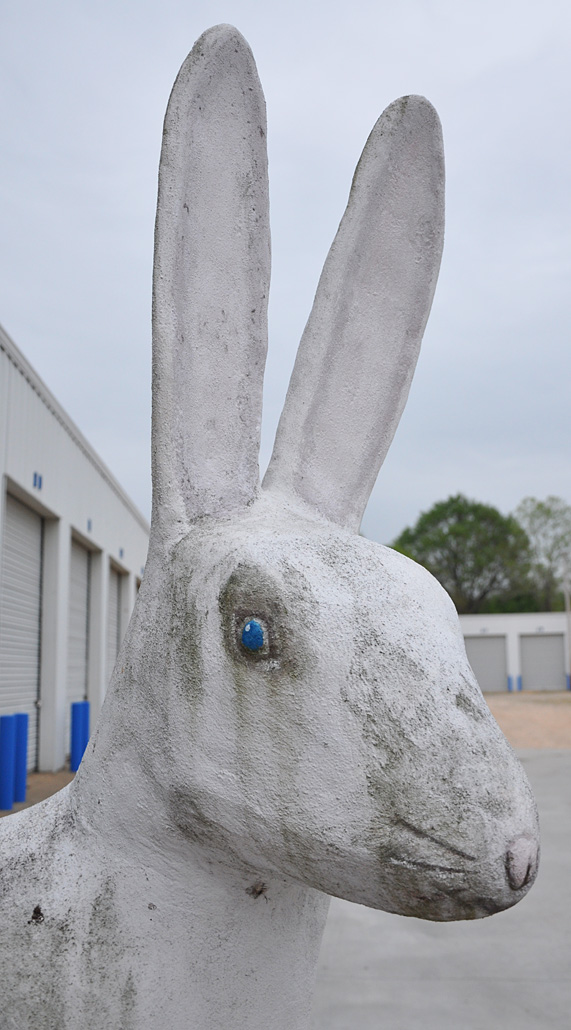 … and the back that’s supported thousands of tourists over the years:

Here’s a shot of the long-closed Big Daddy’s from today — photo taken from where the rabbit would have been:

Moving on….  the Jefferson General Store (naturally in Jefferson) is a wonderful little market and cafe.  There’s also a pretty nice sign collection inside.  Just a sampling: 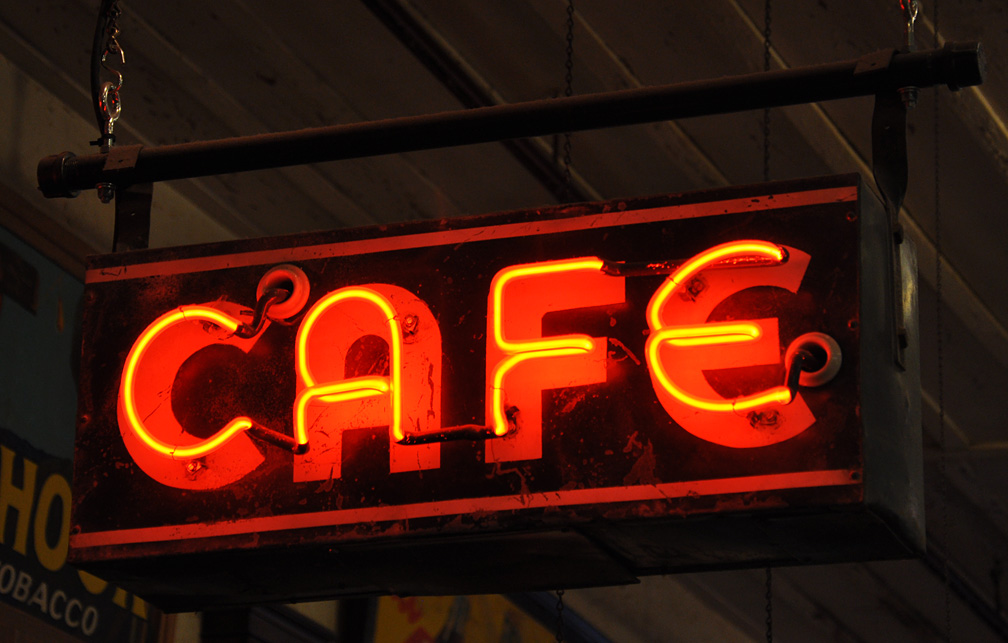 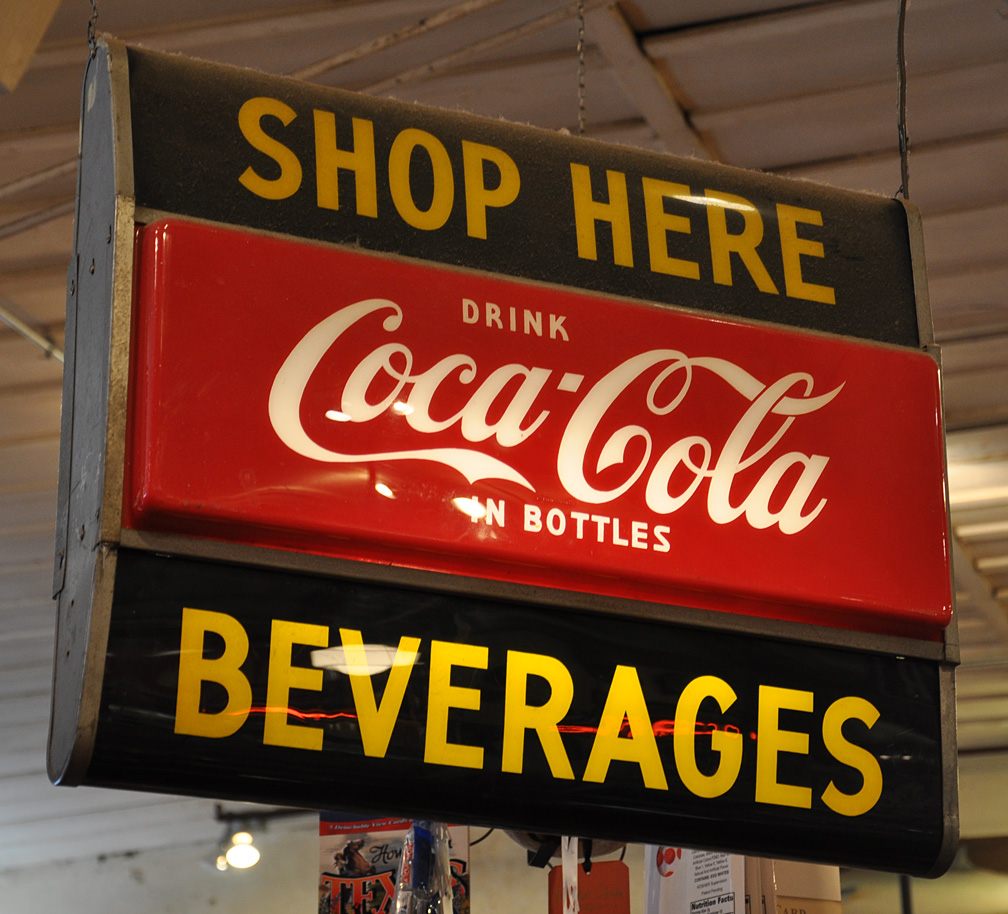 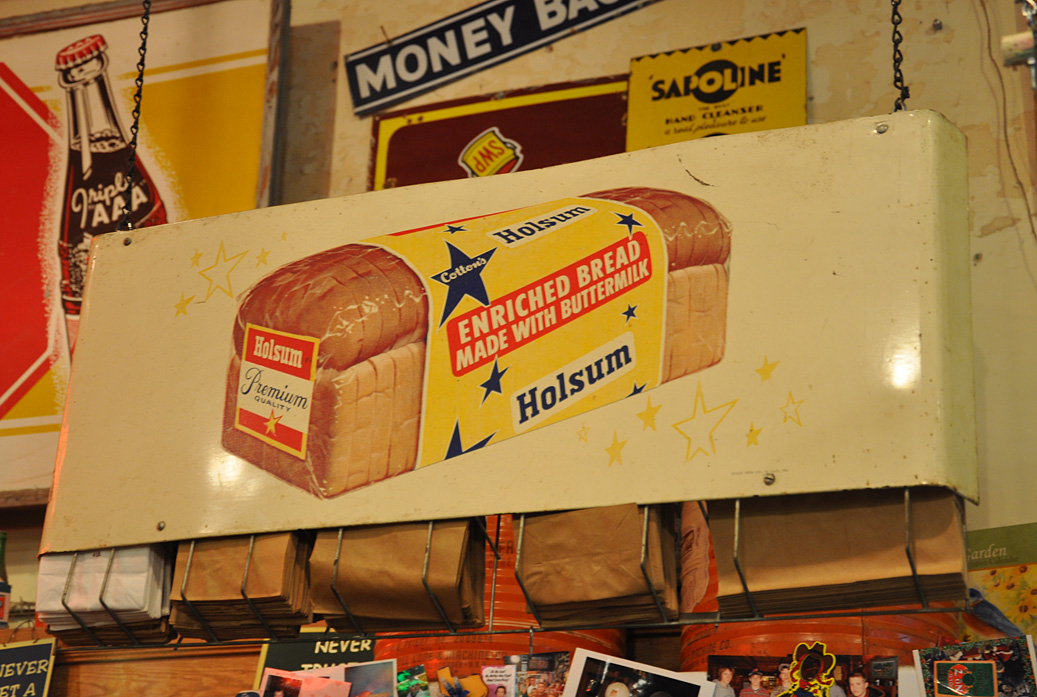 Just north of Marshall proper is this cool guy at Ellis Home Decor.  He’s made entirely of clay pots:

In Marshall, I went to check on what’s left of the Santa statue at the former Christmas Land:

He’s been missing his head for years but otherwise he’s still there.  No trace of his head or face.  The cast-off pieces are just his arm and part of his hat.  He’s fiberglass over wire mesh.  To understand the gigantic scale, note the cinder block between his feet:

A photo of him with his head & some more info here:
http://www.roadsideamerica.com/tip/14346

A couple shorts from Kilgore.   Just how much mid-century goodness can you pack into one building?  poles, pylon, recessed windows, plate glass windows, varying planes…  Anybody know what was here originally?

What’s left of the Kilgore Drive-in south of town: 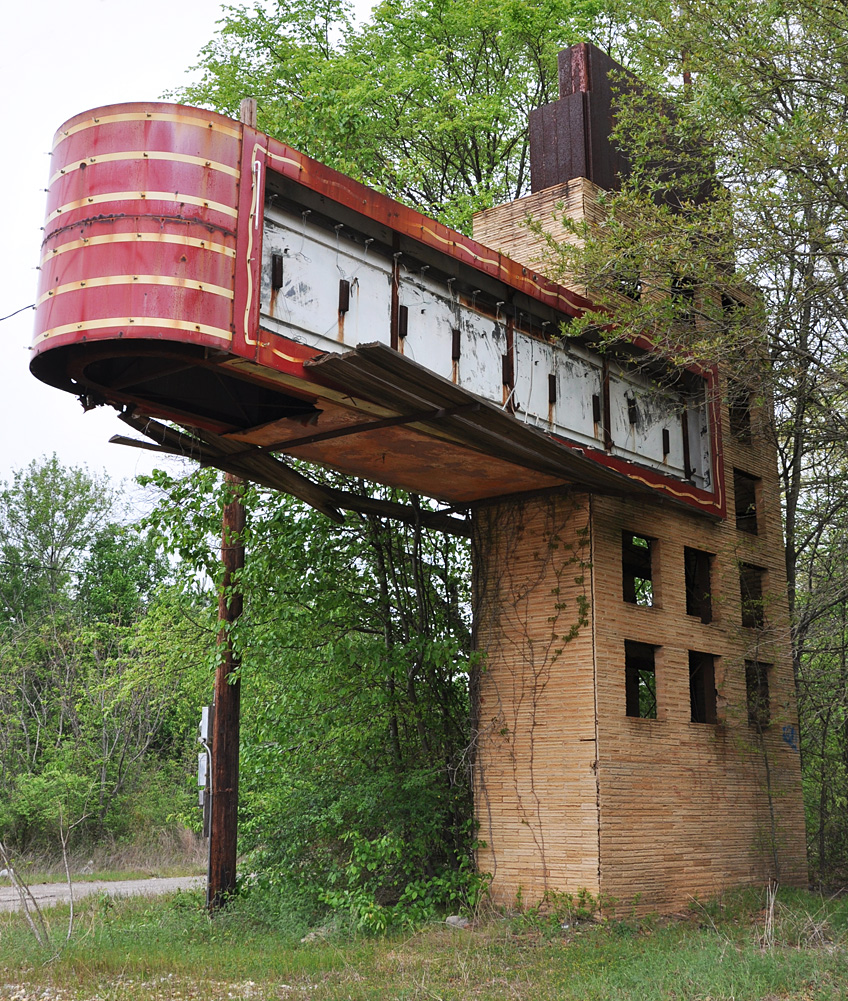 Also in Canton — imagine how nice this gate sign would have been with sun & clouds:

From Tyler — lots of preservation work going on downtown: 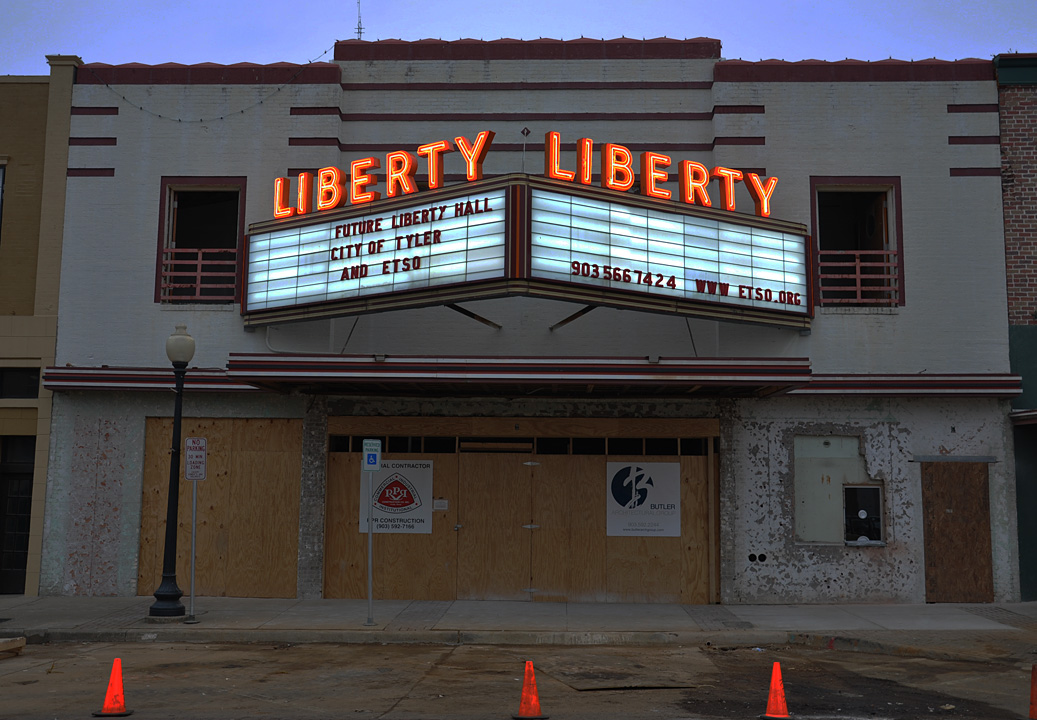 Also these building-less facades which have been saved.  I don’t know what the plans are:

And finally, last photo for the night, also from Tyler.  Reminding me that I have not had any donuts yet on this trip — and that it’s time for some dashboard photography (my loyal blog followers know what I mean):