So I’m about 5 days behind schedule at this point.  But I fully intend to give the lower half of Missouri a thorough go and ditch the rest of the states if I have to.  All is grand here.  Sparkle’s running great.  Clouds in the morning gave way to sunny skies around noon.  I’m writing this the morning after and it looks like another sunny one — not a cloud in the sky.  So I’m thinking hot.  After a couple 70 degree days, yesterday was in the 90s.

Let’s get to it so I don’t waste time writing when I could be shooting.  The morning was spent still in Kansas gathering goodies in the southeast corner.  Just had to stop in at the Six O One Donut Shop just because of the donut on the roof.  Got one donut and a fried cherry pie.  Donut (breakfast) was so-so.  Pie (dinner) was unreal good. 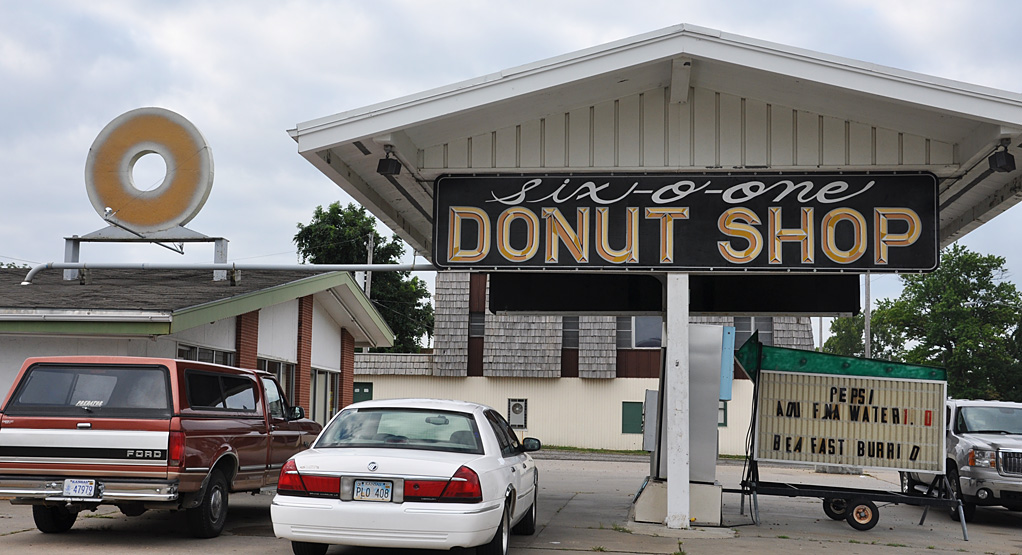 If you’re a sign lover — no, I mean REALLY a sign lover, then this is for you.  I stumbled upon this one in Fort Scott, KS.  It’s a super oldie and I’ve never seen anything like it.  Backlit opal glass letters incorporated into a metal strip flush with the building.  Pre-neon, the letters were let with bulbs behind them.  Backlit opal glass is rare enough — but this format is just incredible.  The very few BOG examples that I know of are on normal, projecting signs — like this:
http://www.flickr.com/photos/agilitynut/4434080682/ 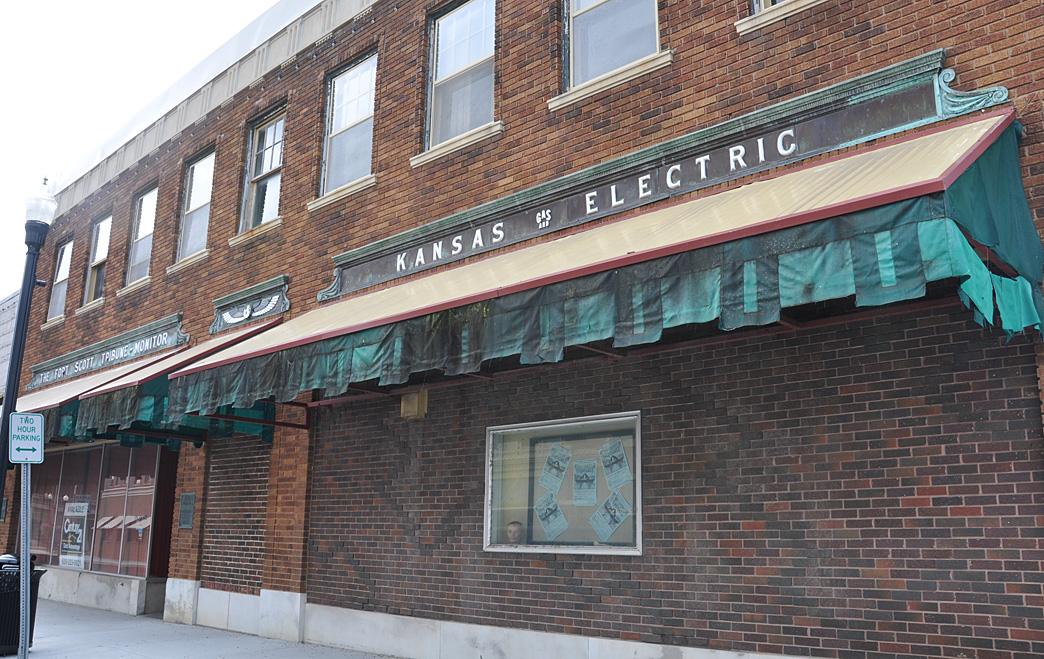 There’s one of those Egyptian birds (braindead and can’t remember the name right now) at the center of the composition.  Here’s a detail showing a broken letter:

On to Missouri — this crime against architecture was committed in Nevada, MO.  According to CinemaTreasures.com (the best movie theatre site, hands down), this theatre was built in 1910 and remodeled in 1950s. It got this look in 1992.  They spared no expense, huh?  While the bulb “Fox” sign is fine, could they have put those air conditioning units anywhere else — like the roof?  How about those crappy sides on the left side? 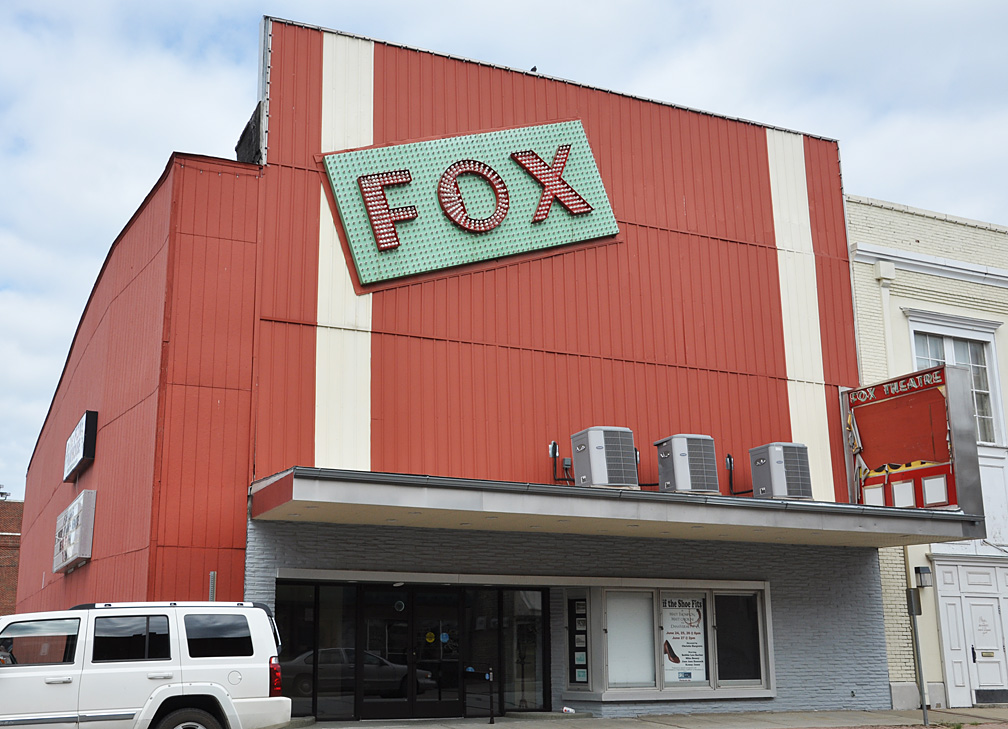 But there appear to be some folks in Nevada with aesthetics.  Witness this intelligent (some might say garish) paint job on this stunner of a building:

One more “grab” (a Flickr word that annoys me) from Nevada.  I fear these soda signs will all disappear one night in a nationwide massacre.

This sign in Lamar still looks good despite being denuded of its neon:

This rusty rooftop sign from Jasper.  This ice cream stand is still alive and kicking:

This one’s hard to see, I know, but I’ll include it anyway.   Also from Jasper.  It’s basically a couple painted plywood figures (corncob smoking farmer & dog) installed with tractor. Sweet.

From Joplin, in front of HomePro.  Love this guy.  Love all construction worker type signs.  Okay, maybe any signs with people.  Or animals or things or…  I can’t tell whether this is entirely new — or a replica of an older version — or a combo of the two (same frame, new panels):

The dogs got some good running and some good sleeping today.  Grippie has perfected the art of sleeping standing up:

While at Carousel Park to check out the old mini golf, I noticed this little guy near the entrance. Appears to be a chubby English Bobbie (cop) – do they still call them that?  I’ve never seen this style statue before but imagine they must’ve been mass-produced.

Another rusty — now missing its business: 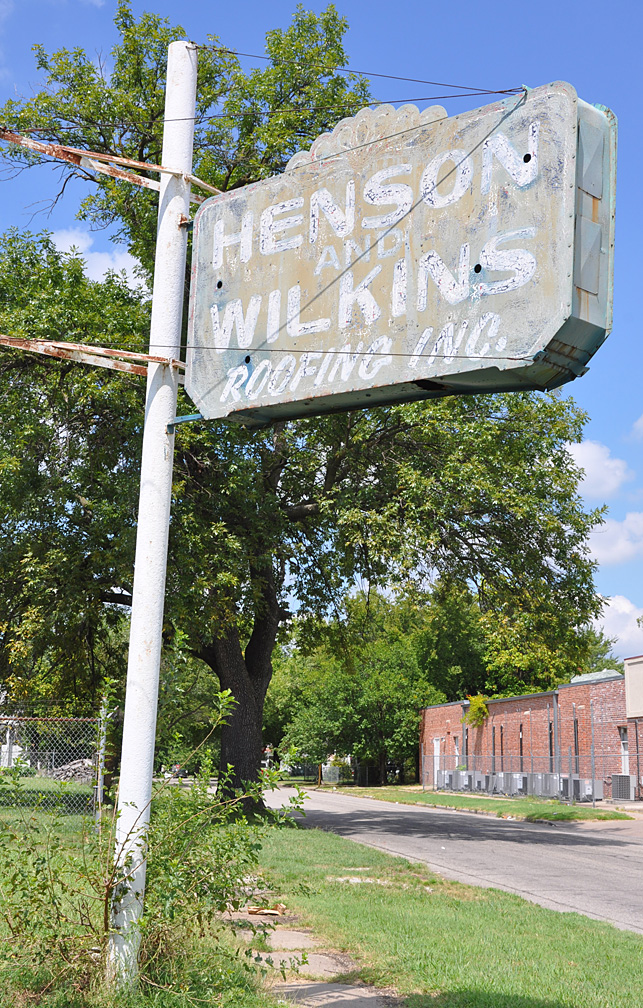 And last one for the day — from Sarcoxie.  I have re-entered the Ozark Mountain region so it’s appropriate to include this one.  Although hillbilly imagery has gotten incredibly rare.  This was at a gas station, turned souvenir/fireworks stand, now long closed.  Worth clicking large.