I knew when I left home that I had an unaccomplishable amount of stuff to shoot.  More like a week’s worth judging from the stack of maps & lists.  That was pretty accurate but I did get to just about everything on my list for the southern part of the state, from east to west.  I might be able to sneak a few northern stops in on the way to the Midwest in a couple weeks.  Otherwise, it’ll all have to wait til next year I’m afraid.

We started the day in Breezewood — once the “City of Motels” (is that old sign still there? I didn’t get a chance to check).  But now the motels are mostly the big chain hotels.  And scads of fast food places.  The old “Souvenirs from 50 States” gift shop is still there which is always a relief (to see it still open).  But there are still two oldies right there amongst the glut — but only the first still open (and probably barely).  The second must’ve been part of the Super Motel chain judging from the shape of the plastic sign on top that’s now missing:
http://www.flickr.com/photos/roadsidenut/3378083931/

At a repair garage in Bedford, I came upon this Alignment Bear sign.  I’ve never seen a plastic one like this before.  They are usually metal — see bottom of this page for examples:
http://www.agilitynut.com/signs/ca2.html

Blocking a clear frontal shot of the Summit Diner in Somerset was this thing.  Isn’t that the Munsters car?
http://www.morticiasmorgue.com/mu/MunstersCar.JPG
The back of the car had a sign that said “Widowmaker”. 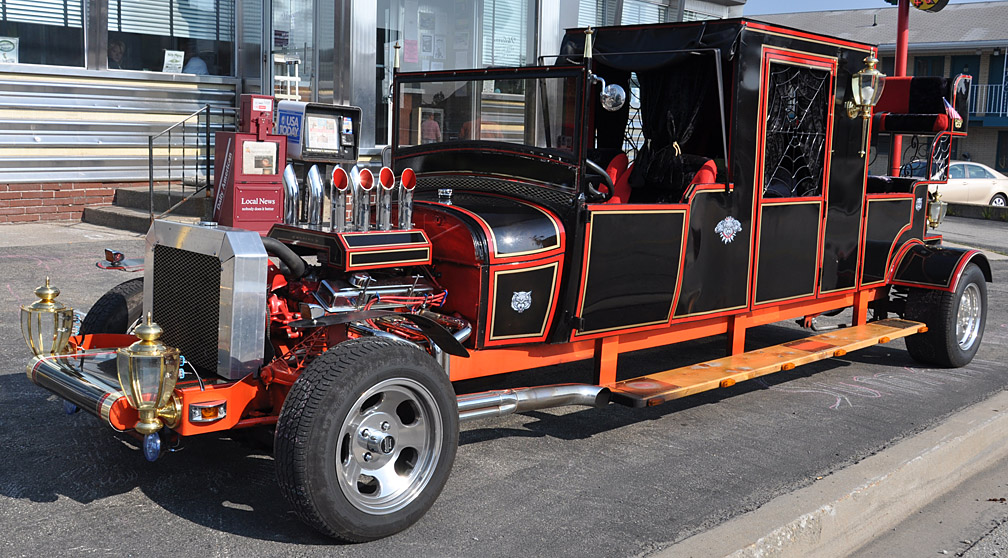 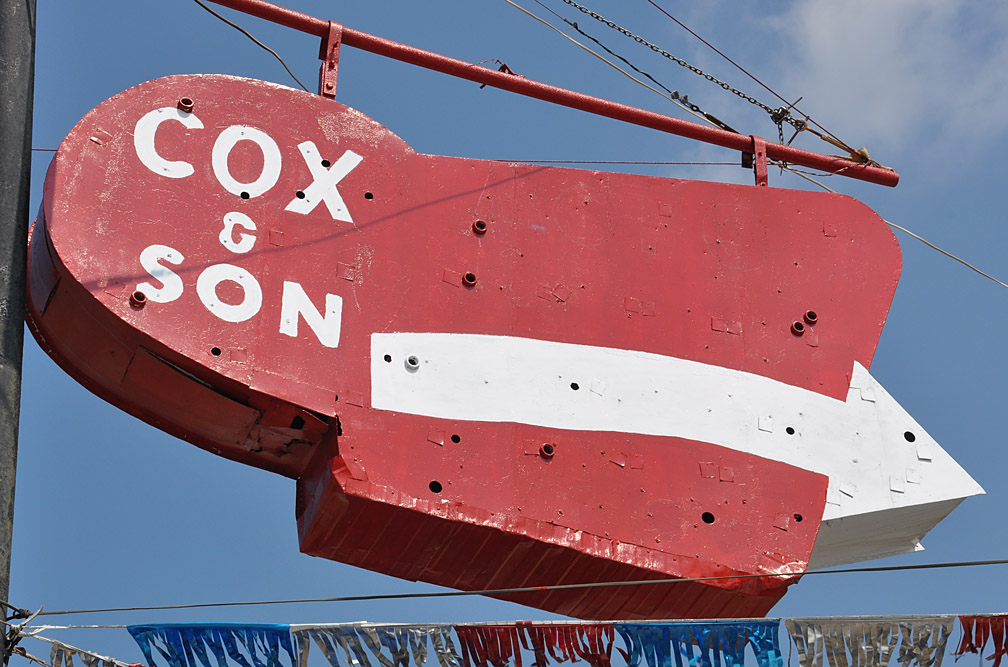 Apparently, these arrow laundromat signs were mass-produced by Westinghouse (see itty bitty text at the top).  This one is in Perryopolis:

The former Zerambo’s Gulf station is in Bentleyville.  The pumps were on the left front where the flower planter is now:  The station’s office is a plainer house-like building at the left out of the frame:

From Canonsburg — Humble Carpet is probably not the original tenant, but they’ve been kind enough to keep the beautiful green and black glass tile:

A trio of shots from McKeesport — I love the Golden Rule furniture store’s ruler sign and mid-century touches:

The Theatre Bar’s freestanding sign letters are a knock-out.  And the curved entrance sucks you in like a vacuum.  Cars really in the way here — did the best I could: 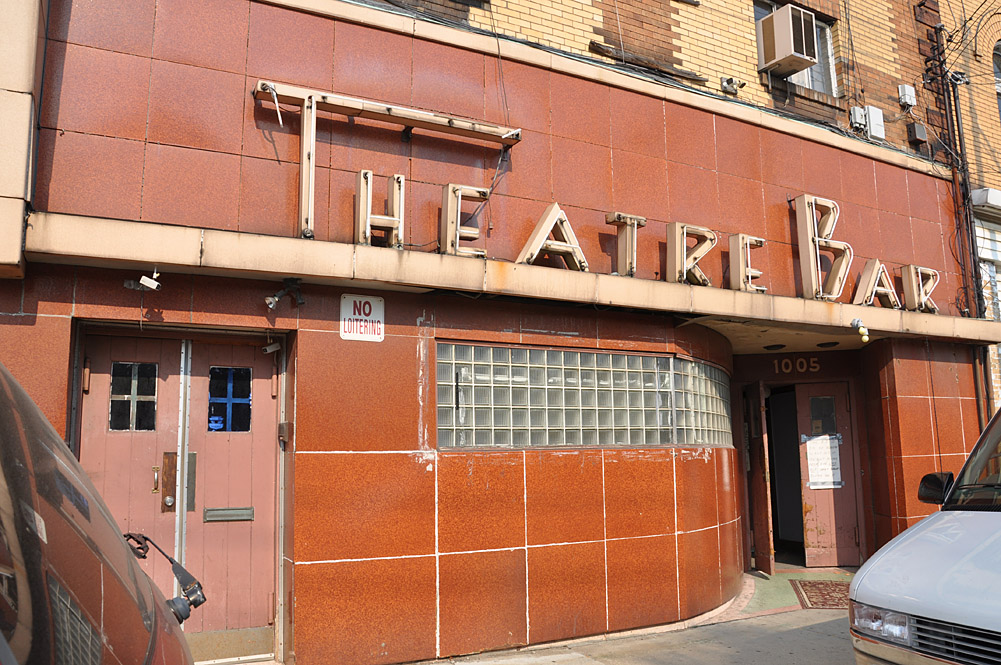 A couple fun statues to wrap things up.  In Pittsburgh, on the roof of the “Big Day Wedding Center” store: 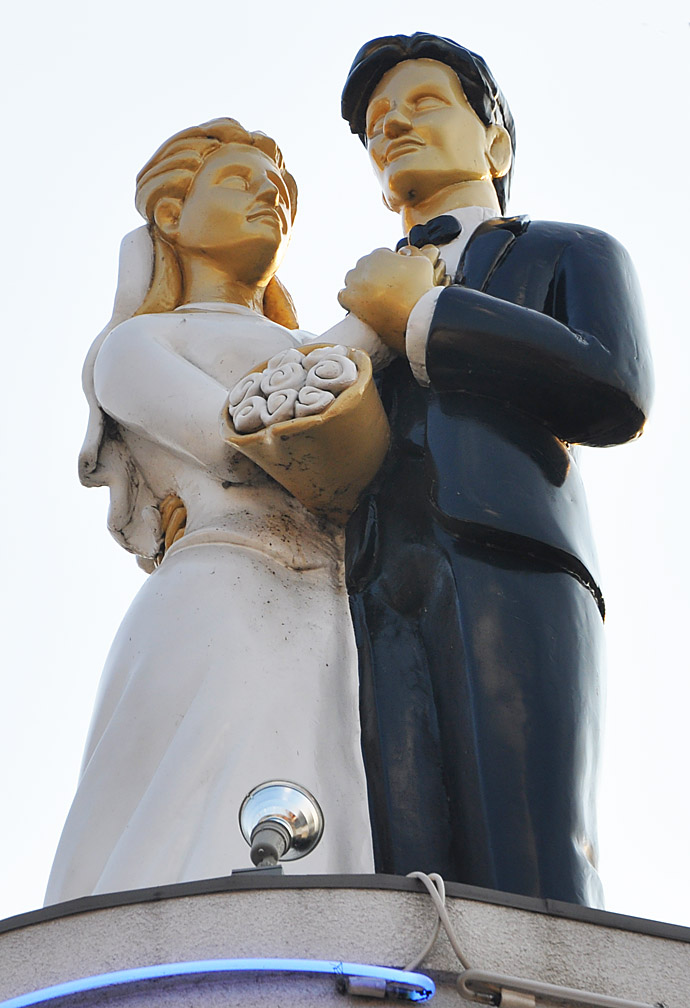 And from Jellystone Park in Mill Run — a quick hi and bye from Yogi and the kids.  It was a quickie trip after all and I haven’t gotten any shots of them in yet.  I would’ve posed Grippie & Gremmie inside the basket with Nik & Fix but you could barely see the tops of their heads.  I held their attention with my nearly empty peanut butter jar.  They love peanut butter as much as I do.  It’s a roadtrip staple.  Jif Chunky, if you must know.  Great on a bialy or on crackers or straight off the spoon.

I didn’t write down the mileage for this one but I know it was at least 2,000 miles.  And no speeding tickets!  Actually, there was one close call on I-80 in nowhereland where another car and I were equally speeding and changing places here and there.  He got stopped and I didn’t.  Whew!

Come on back to join us here in a couple weeks (July 26) for the next Biggie.  I’m working on the maps and lists right now.  Five weeks to focus on MO & KS but there will be plenty of stops in OH, IN, IL, IA, etc. as well.   Thanks for providing the encouragement and companionship on these trips.