Day 18 – boy, that sounds like a lot!  Still another 13 days to go.  Which will be enough.  This is really exhausting stuff.  It would be far saner to do this for five or six days at a time, then take a day off to just chill somewhere.  But, no, not possible for me.  You never know what will be gone the next time you’re passing through.  What weather will befall you on the next trip.  so I’m obsessed with getting as many shots as possible from daybreak til sunset, every single day, rain or shine.

Speaking of shine — it was an absolutely gorgeous day from start to finish.  Only a few clouds — of the pretty white kind.   Even the traffic in downtown Memphis was minimal – strange for a Monday I think.  I hit some annoying slow traffic in the afternoon outside the city.  But I’m finally perched back on the MS border ready to dive in again after completing everything in that little Memphis corner.  At least I will have gotten some TN stuff done if I have to ditch plans somewhere in AR and get back to Real Life.

The dogs got to cut loose at Shelby Farms.  A super fun place with a huge pond that was warm enough for swimming (them, not me).  Even though there aren’t fences, or minimally so, Grem was too busy hopping in the grassy fields and finding critters holes to dig in to make me worry about her taking off.

I stopped off in Senatobia, MS before tackling Memphis.  I was hoping to check out this sign:
http://www.flickr.com/photos/naslrogues/3377820956/

But alas, look what this church has done to it:

While many Central Park fast food stands are still open, it seems most have been turned into other businesses.  I thought this might be just a candy-apple-only place — which would be kind of bizarre.   But despite the name, I didn’t even see it on the menu.  This is in West Memphis, AR:

This is from the Puck Building in Memphis:

Here are a couple in Memphis that I’d like to know more about.  What was this building used for before it was this church? (south of downtown)

And this sign (north of downt0wn). The letters under “Your Future Learning Center” seem to spell out Angelo’s maybe in script at the top.  But that’s probably not the original name anyway.  The framework is what’s most interesting.  It looks like either a basket of laundry or a big bowl of popcorn.  Or else I’ve been looking at way too many old signs lately: 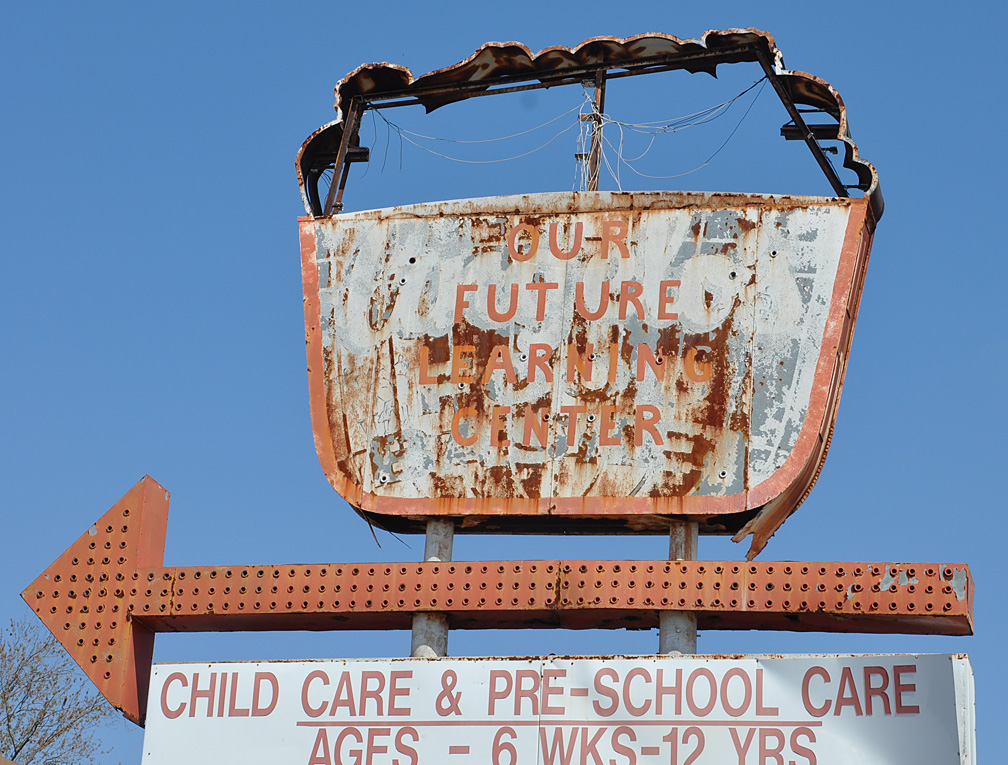 More signs from Memphis.  An example of what I call “Neon Extensions” signs (with separate neon bits that are mounted off the face of the sign itself). This one has both a bell and an arrow (now broken):

No sign of a hardware store in this strip mall.  Glad they left this hammer alone.  Green is a very cool and unusual color choice:

I was looking for a “fist & thumb” sign elsewhere today and came up dry.  Then elsewhere, I came up with this.  So they must’ve been used by a chain.  A chain of what I have no idea.  I guess the thumb is used like 1950s bulb pointing arrow:  this way to the whatever-it-was store: 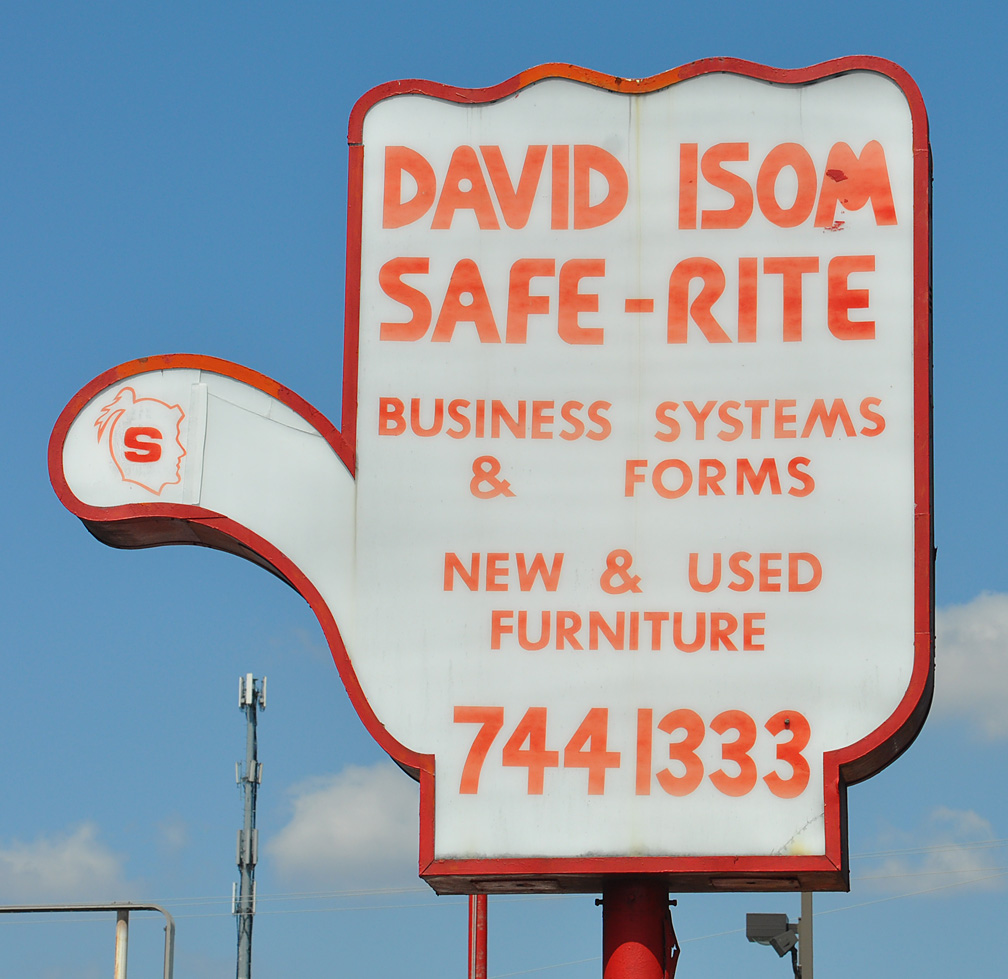 This one I liked a lot.  Appears to be old just nicely kept up:

Last stop of the day was at the Dixie Memorial Pet Cemetery in Millington, TN.  It wasn’t too exciting for me since what I look for are old grave markers with real photos and unique, touching inscriptions.  This was more modern and generic.  No photos and mostly just pet’s names/dates.  However, a couple things “got” to me.  There was a special section just for Memphis police dogs.  This was just part of the group:

And this marker had me gulpy and weepy.  I don’t believe in heaven or an afterlife — but if there is one, I do hope someone will throw balls for my dogs til I get there: 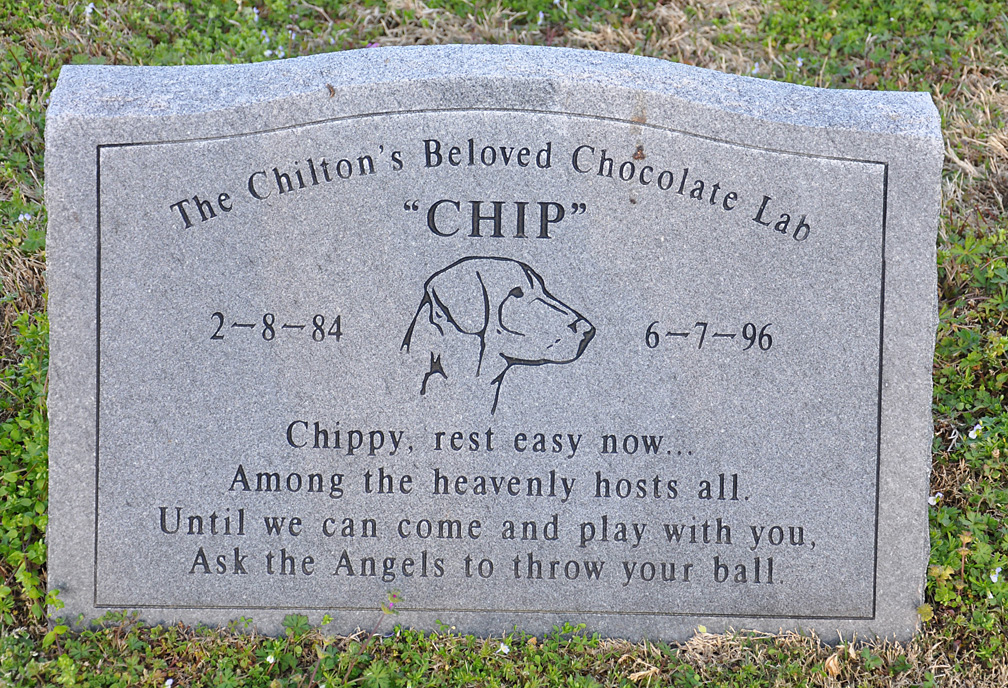