The day started out a little grey but all that would change later.  On a rooftop in Seymour: 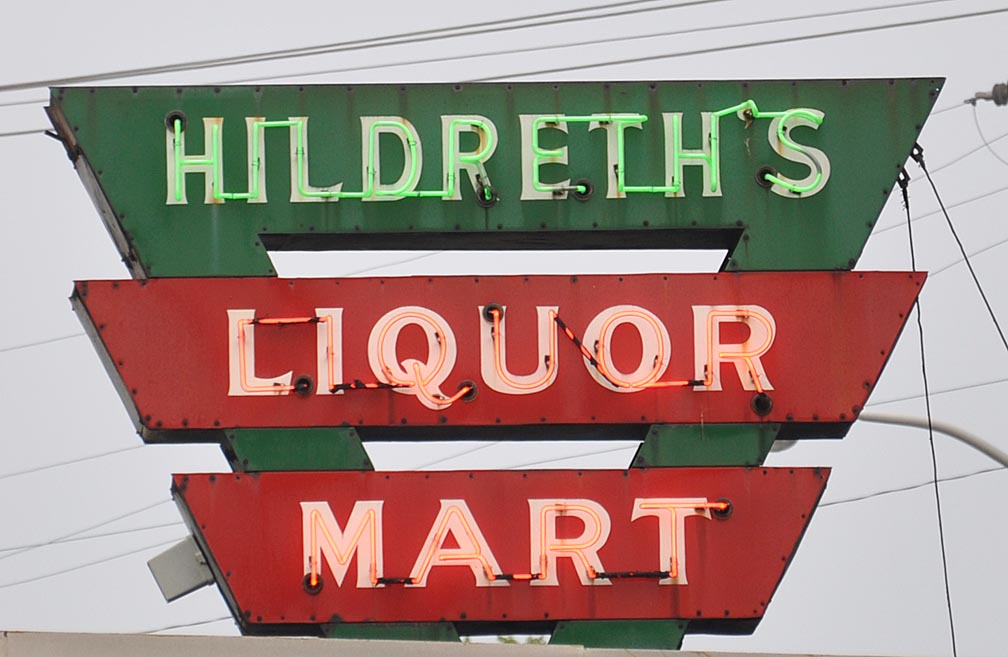 I’m pretty sure they only have these Huck’s gas stations in Indiana and Illinois.  Not an old sign but I still like the design and character:

This motel is all by its lonesome in Bedford on Route 50: 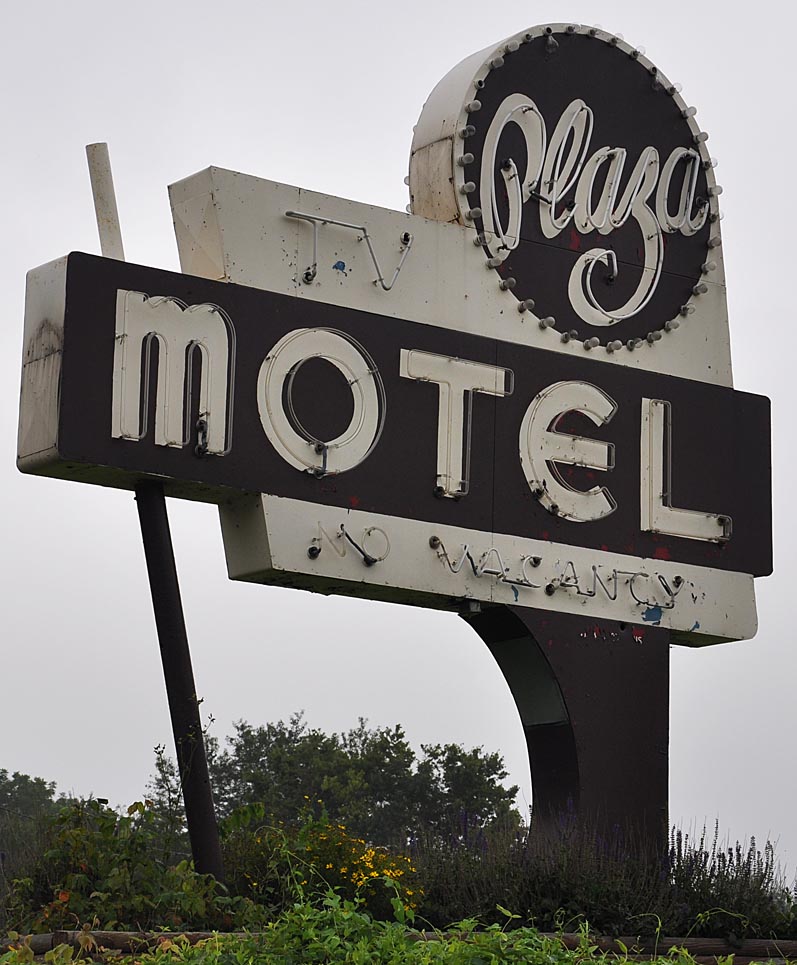 I saw a couple of these Art Deco Salvation Army Buildings.  This one in Bedford was the nicer of the two: 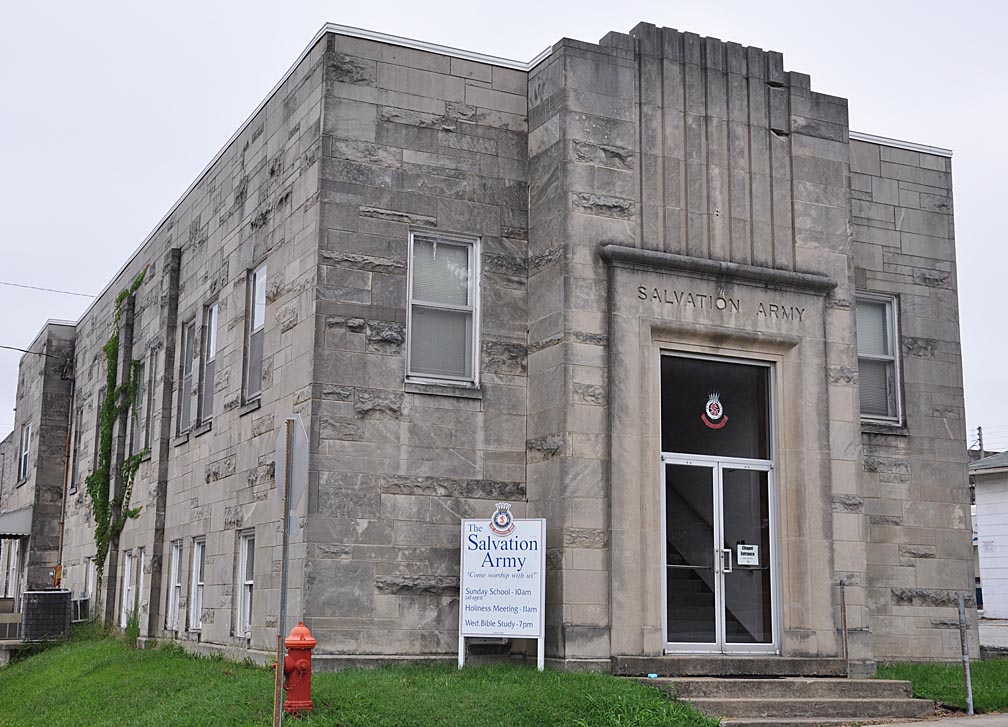 Today’s road snack.  Nothing all that coconut-y about these M&Ms.  Just a few little strands next to the chocolate inside.  I’d stick to Mounds if it’s coconut you crave: 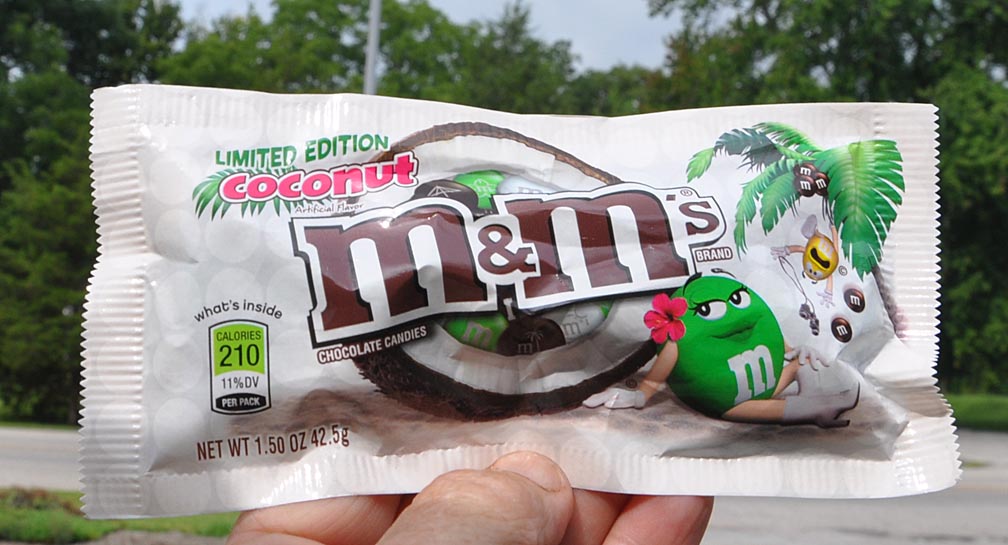 We had the North Dunn Dog Park in Bloomington all to ourselves this morning.  The fencing looked good enough to contain Grem but I had my doubts about the tree-y area on the left.  I managed to keep her with me with lots of ballie retrieving and cheese.   The dirt path on the right leads down to that far right corner where there’s a river coming from a dam.  We had fun but my clothes were muddy within minutes.  I have long since given up caring what I look like on these trips.  With all these water stops, I’m usually covered with pawprints.

The parking cops in Terre Haute zip around on Segways.  Or at least this one did.   I’m sure glad they don’t use these in NYC.  They are too quick and heartless as it is.

I must give thanks to these guys for making my photos sing today: 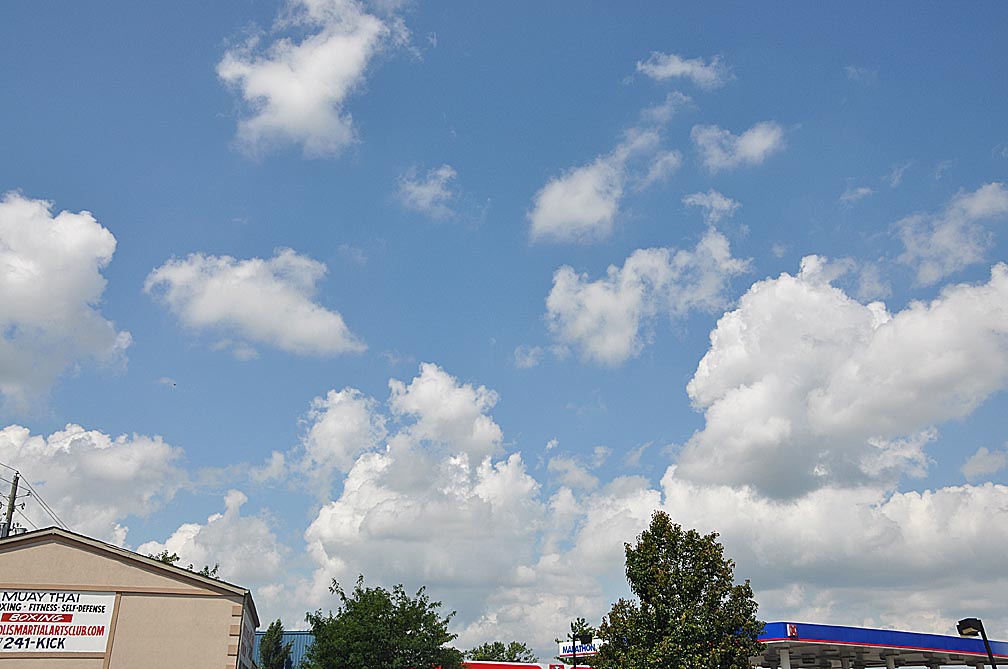 I love the faux wooden edges of this sign in Terre Haute: 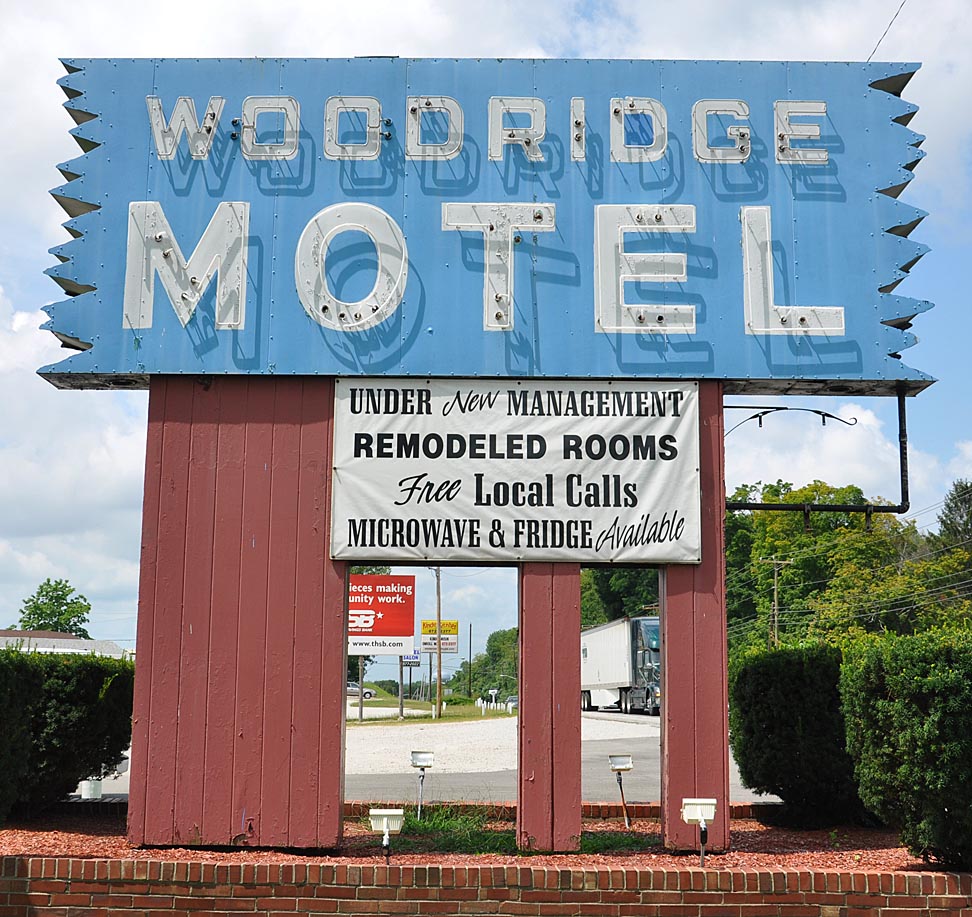 From Indianapolis — on Route 40 (as you might have guessed):

Although the bulbs are gone and I’m sure the neon doesn’t work, they at least keep the sign painted and pretty.  Also from Indianapolis:

As I was taking some photos downtown, I noticed this low budget art car.  A woman said that “Charlie” owned it and that he’s always sticking new stuff on the car. 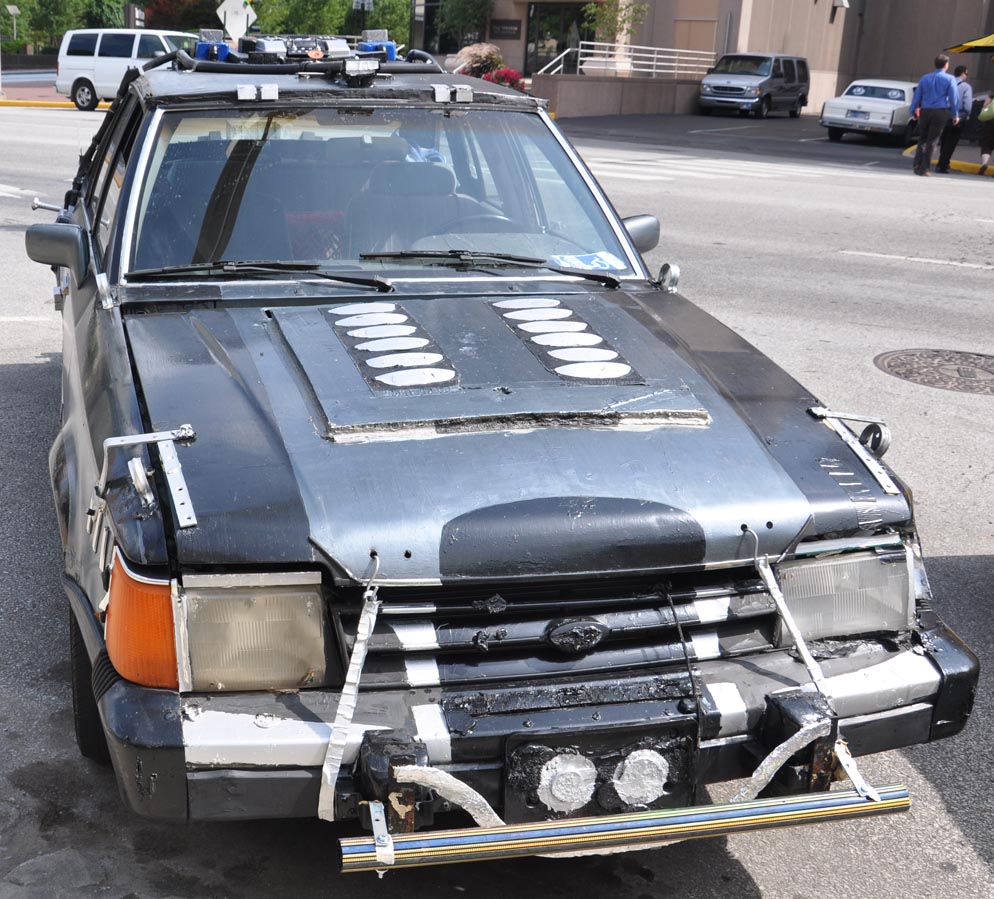 I noticed at least three of these repurposed signs in Indianapolis.  The one for Dunkin Donuts was the nicest and it revolved.  One not shown was for a paycheck cashing place.  What did they advertise for originally? 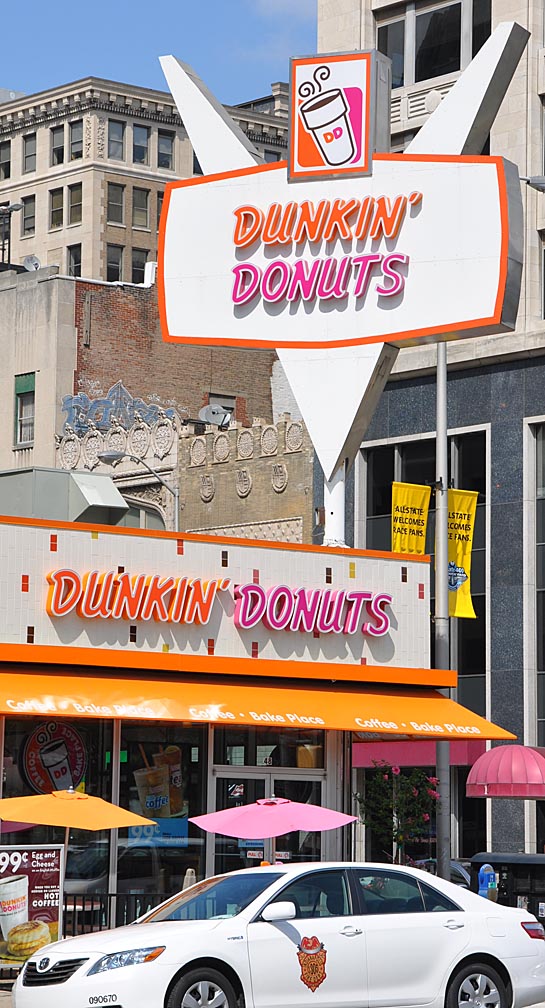 At the end of the day, I noticed these sleep-related motel signs in Franklin:

Sleep was something that I was really needing last night.  Had to put off publishing both this blog and my Flickr photos til this morning.  Seems I get started a little later each night on these extra credit projects.  By the time I eat something “real”, answer email, get organized, crop & tweak some photos… it’s midnight and I’m overcome with exhaustion.  Sometimes it’ll just be easier to finish up in the morning.  Maybe I’ll take a night off soon just to sleep and recharge myself.