The day started out cloudless and sunny.  Another hot one.  But things will change later.  I got the dogs to the Mount Airy Dog Park in Cincinnati in the morning.  I’d been there several years ago but in the rain.  Much more fun this time.  Things have taken their toll on even the most active of the bunch.  Getting better at these over the shoulder shots.

This odd structure in Cincinnati with the columns is a replication of the Albee Theatre facade.  The theatre was located nearby and torn down:
http://cinematreasures.org/theater/1044/

By afternoon, it was in the mid-90s.  I made a pit stop at the Sno-Castle in Latonia, KY to celebrate the completion of the Ohio portion of our trip.  Well, actually, there might be a tiny bit more Ohio to come on the way home.  I hope to spend a day at the American Sign Museum in Cincinnati combing the files for sign stuff — a gracious invitation from Tod.  For those of you that don’t know, I write the signs column for the SCA (Society for Commercial Archaeology) so I’m always eager for new info and ideas.  Anyhow, I got a snow cone with two of my favorite flavors:  peach and lime.  The dogs weren’t sure what to make of it — preferring ice cream to ice.  Grip & Fixie wanted none of it.  Nik sort of licked it. But Grem crunched it down happily. 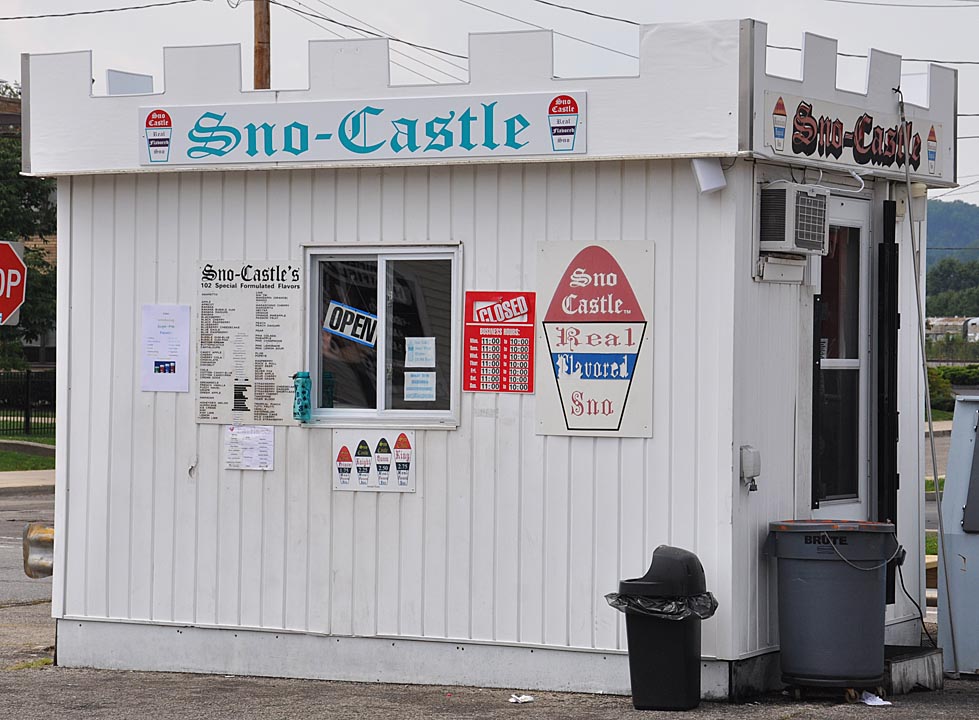 I don’t know if this sign ever had neon.  From Latonia, KY.

A pretty little neon sign at a car lot in Lawrenceburg, IN: 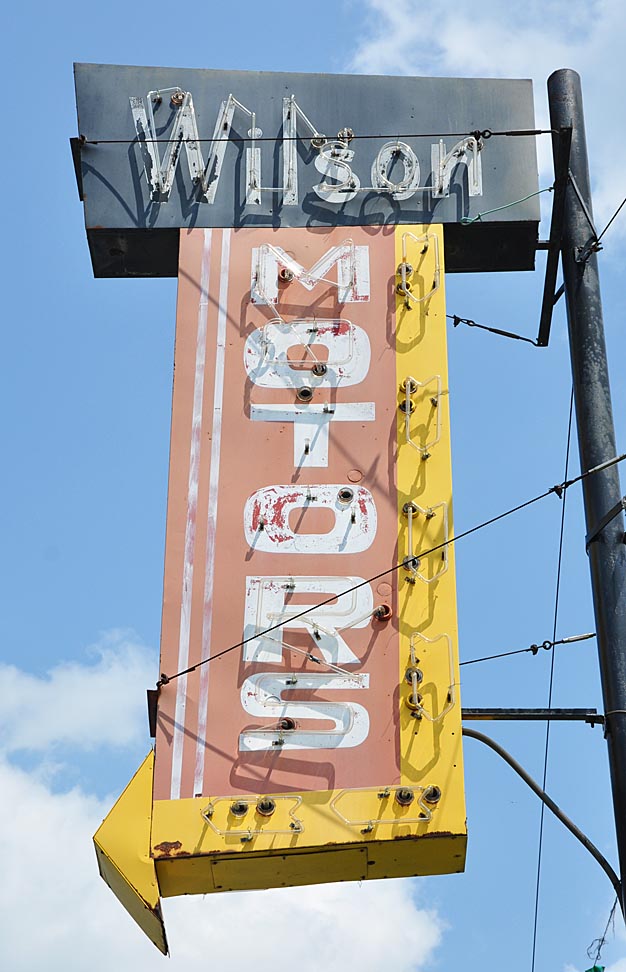 I was looking forward to Mundt’s Candies in Madison, IN.  Unfortuately, they were closed.  It was a Monday but there hours weren’t indicated.  In fact, you couldn’t even seen inside which was also disappointing.  Evidently, they have an incredible soda fountain.  And I really wanted to try the fish candy:
http://www.mundtscandies.com/

Shortly after Madison, that’s when things started going dark.  I started to wonder if I should worry about tornados and vowed to pull over if it got super windy. Where to, I don’t know.  I think you’re supposed to get out of your car and lay down next to a building.  I can’t imagine doing that, especially with four dogs in tow.

The sign at the Freezer Fresh in Hanover, IN was shot at around 4pm but you’d never know:

These two signs were in Scottsburg, IN.  Pouring out but nice photos anyway.  Good job, Dee! 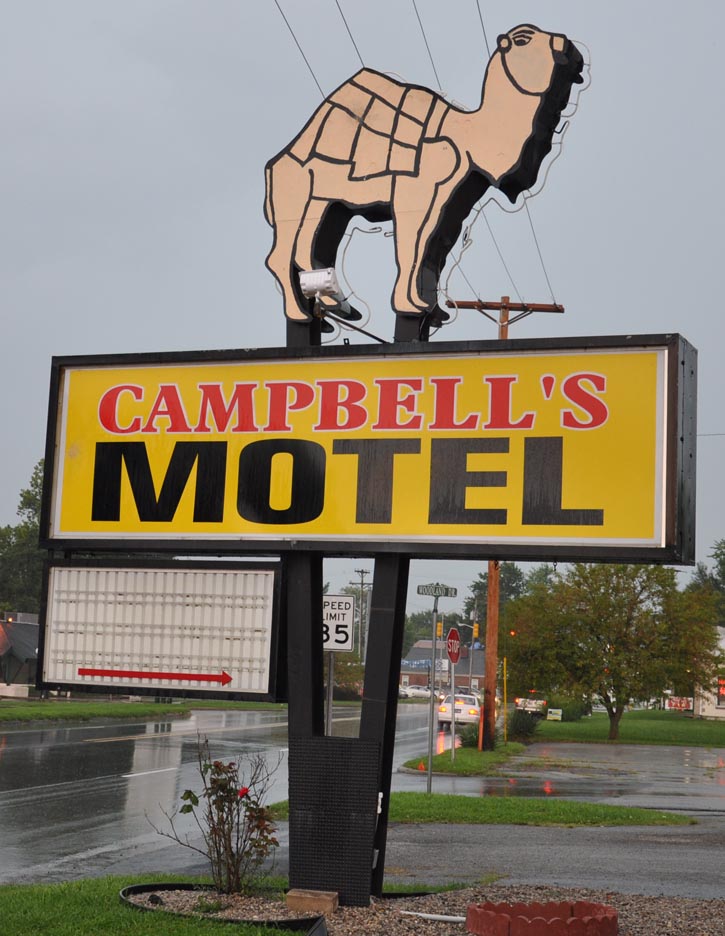 One of my passengers is terrified of thunder and lightening.  And there was a lot of it.  Poor Fixie, all these years, instinct they say.  Even though the rest of us are all acting normal and I do my best to reassure her.  She gets into this internal funk like it’s the end of the world.  Panting, trembling, miserable.  (crappy photo taken while driving, not even sure what the setting was)

But later than afternoon, when the storms had long passed, she was doing what I call her “happy headstands”. She makes funny noises and looks like she’s trying to stand on her head.

I stopped in Seymour, IN to check out the Parker Jewelry sign.  That was gone – business now the Revel Salon.  Very sad.  Here’s what it once looked like:
http://www.flickr.com/photos/sethgaines/1028994626/

But at least while I was there I saw this guy.  I love the strange shape and the pattern of the letters.  And the bar seemed to be going strong for an early Monday evening. 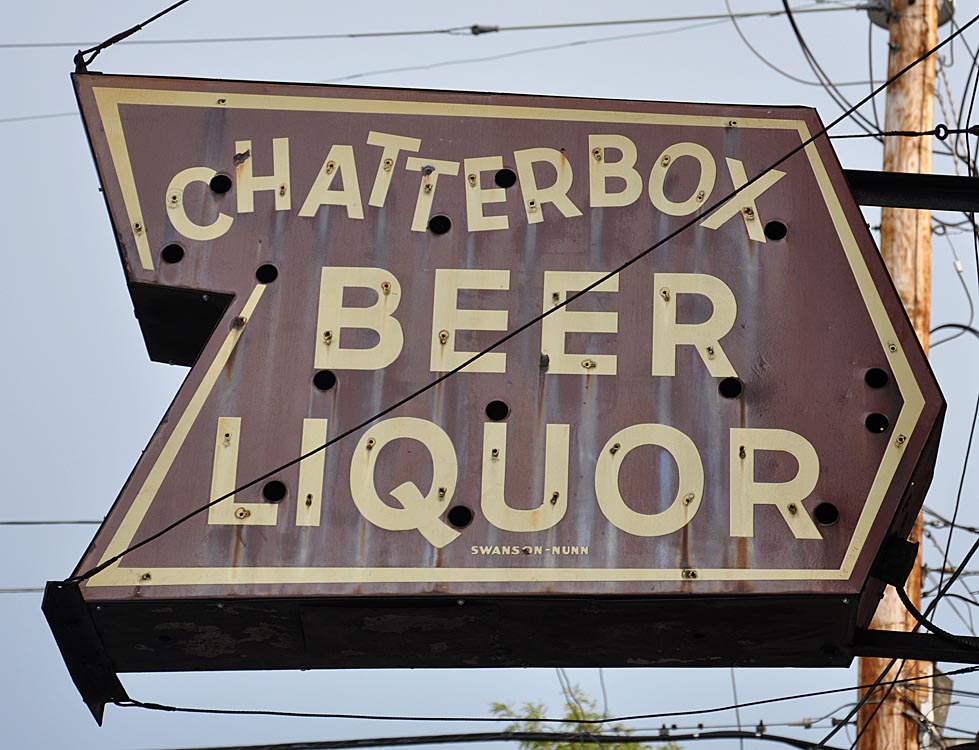 You know it’s getting towards the end of a busy day when there are those damned stickies everywhere.  I don’t exactly know how this happened — I swear it wasn’t staged!  This is an overhead shot of Grem in my lap.  Taken while driving, naturally.

I was looking for a gas station in New Vernon, IN towards the very end of the day.  I had even brought a printed photo and showed it to a bunch of local folks.  But still nobody seemed to recognize it.  New Vernon did have other interesting buildings anyway, including this twin.  Nice detail but the color really makes it.  Like giant china plates.