I headed down to Glendale, CA last night for the Grand Opening of the Museum of Neon Art’s new dual exhibit:  “There’s More to Neon Signs Than Liquor, Motels and Live Nude Girls” and “Motel California”.  A stunningly beautiful display as you shall see.  A lot of freshly restored neon signs were on hand — some which have been in storage for many years, others that were only recently taken down.

The Mission Motel sign was built in 1950 and was originally displayed in Oakland, CA; the Anchor sign from 1963 came from the Seaport Marina Hotel in Long Beach, CA; the Dining & Banquet Room sign from the 1950s came from the Bel Air Motel in Fresno, CA:

A close-up of the rapid-fire animated bells on the Mission Motel sign: 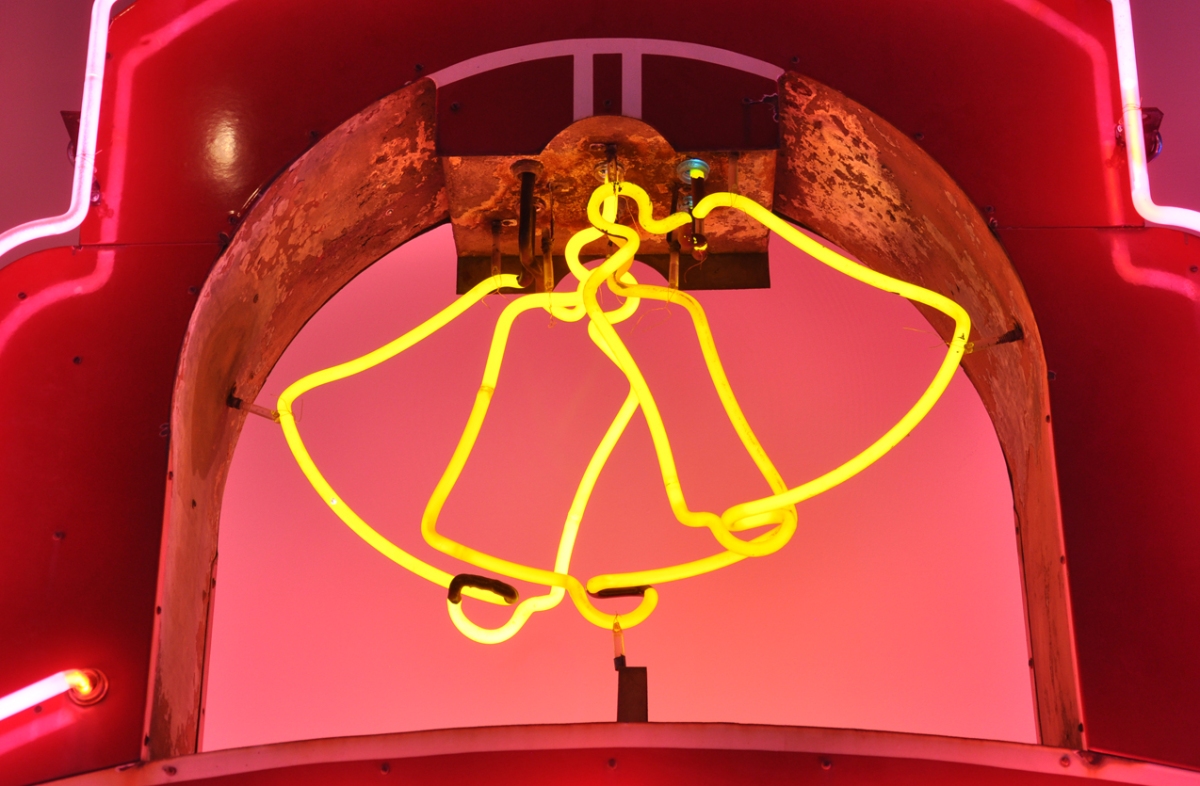 One of the stars of the show is this dragon — one of two originally installed in 1957 at Grauman’s Chinese Theatre in Los Angeles.  The animation moves along from the tail to the head of this 40 foot long sign.  It took years to restore this beauty:

Here are a couple of quickie videos that I made to show you the animation:

The other dragon is in storage at the Hollywood Heritage museum.  This photo shows what the dragon looked like when it was still installed at the theatre:
https://www.flickr.com/photos/79761301@N00/10769343373/

Some photos from the “Motel California” part of the exhibit with advertising signs and a Magic Fingers display from Heather David’s collection:

A close-up of the Chief Motel sign (built in the 1950s, originally located in Long Beach): 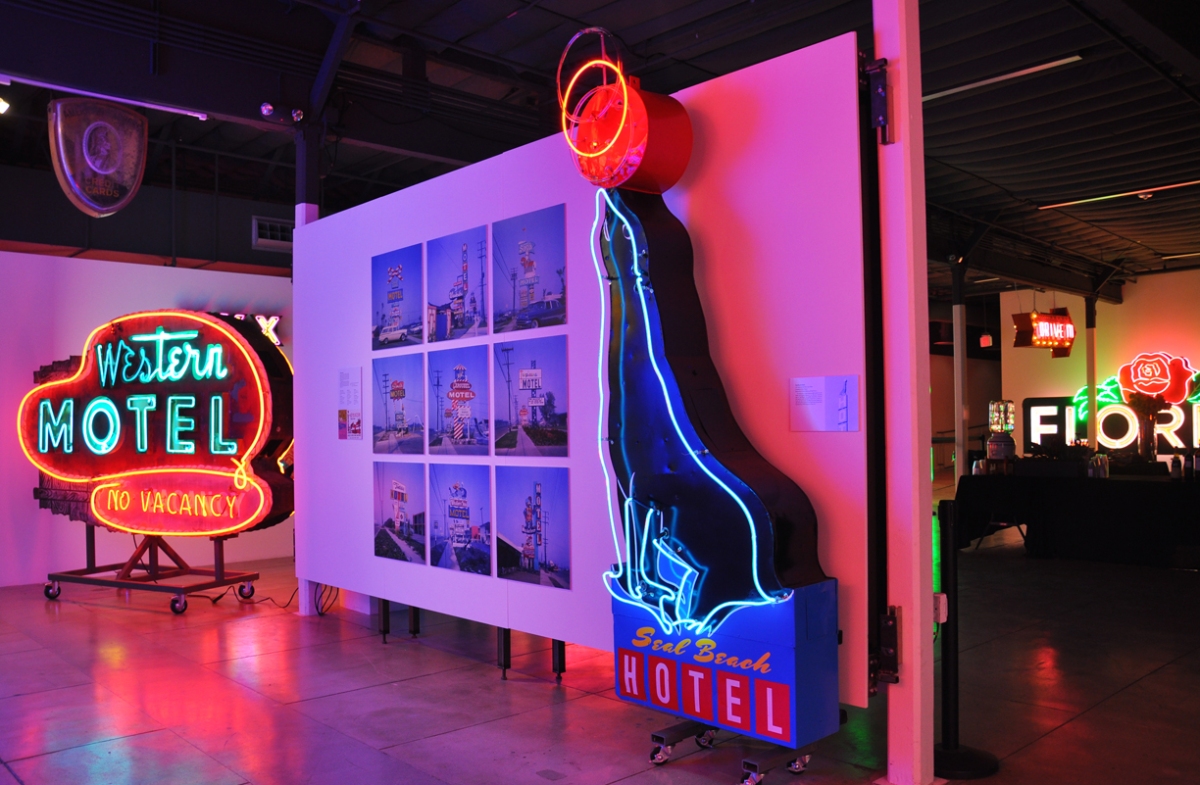 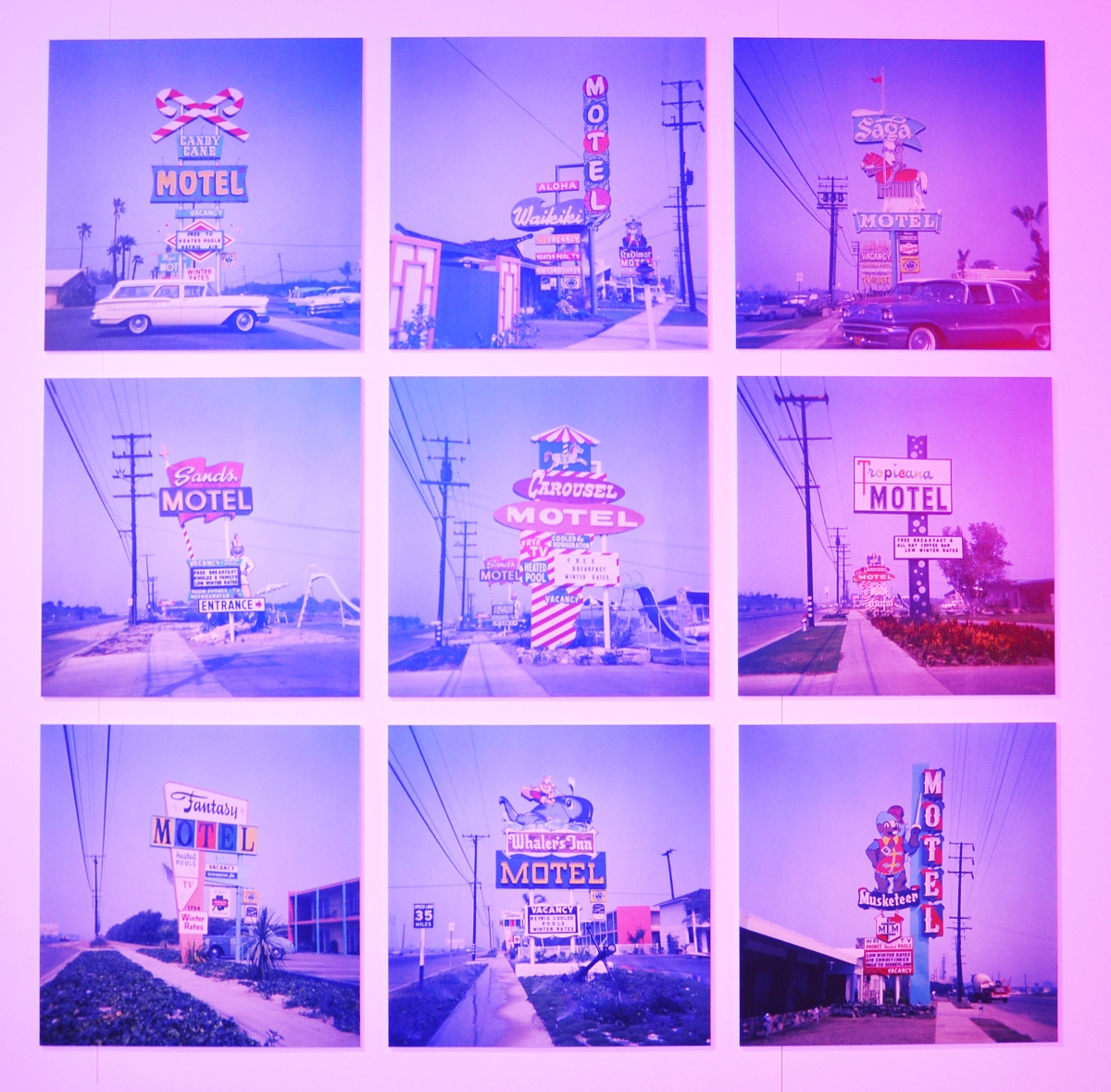 Loads of other motels and motel signs appear in Heather David’s new book:

which is available here:

The Tinder Box was built in 1953 and was installed in Santa Monica:

These contemporary signs were based on vintage signs:

A close-up of the animated, layered neon on the Hofbrau sign: 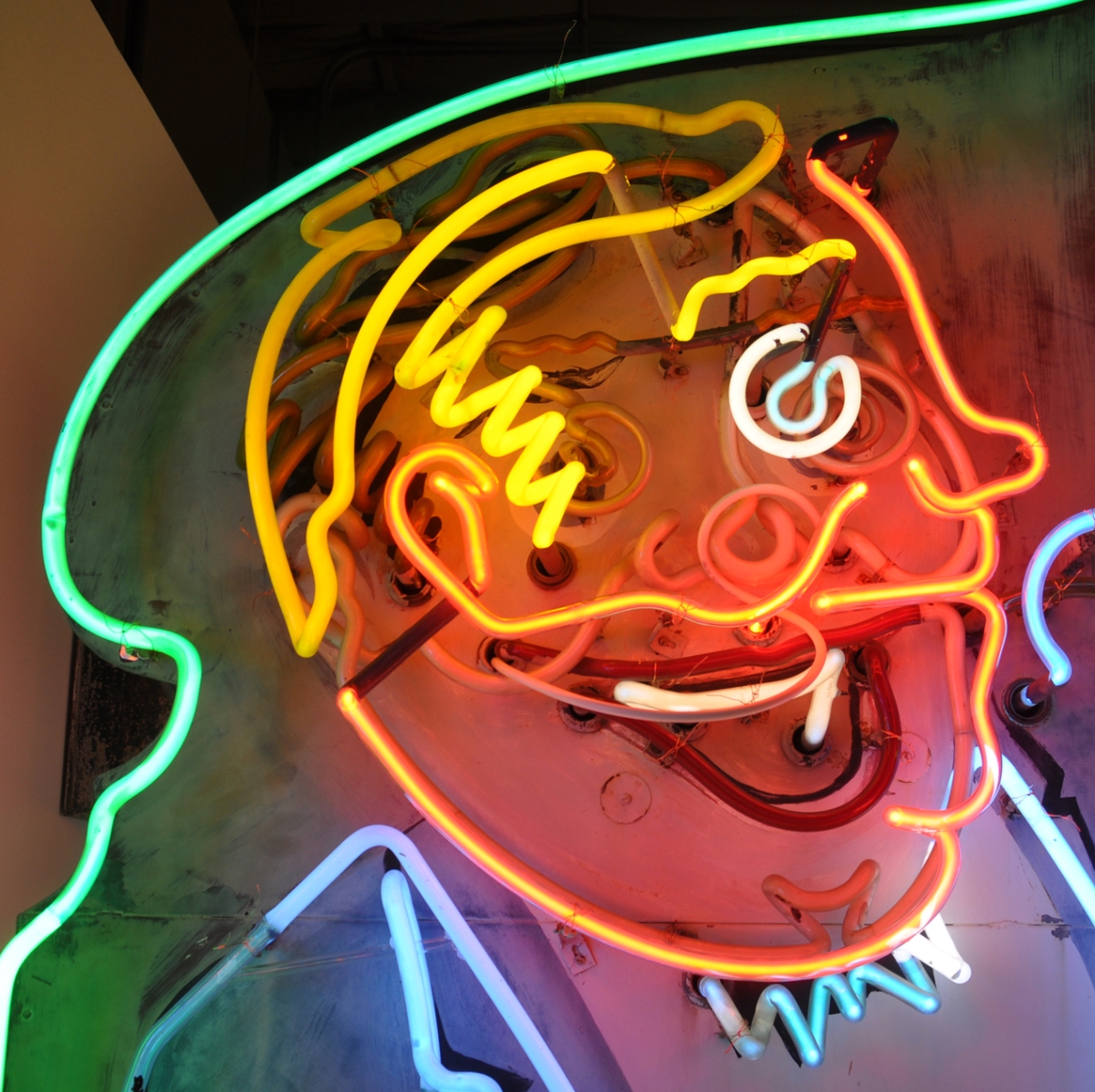 The Winning Wire sign with ripple tin panels was built in the 1930s.  The original location is unknown:

The cocktail glass is from an unkown bar in the Bay Area.  The sign was built in the 1930s: 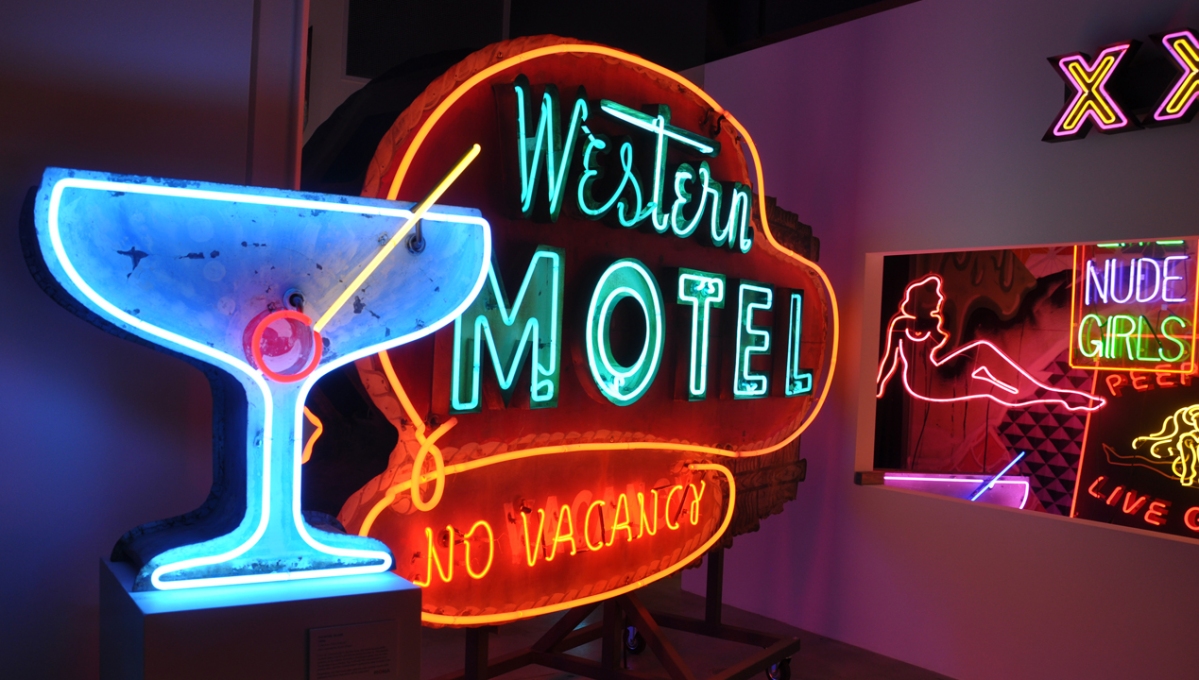 The Peepshow signs are set behind a wall, simulating a display window.  They are mostly contemporary replicas.  The nude woman on the left might be vintage (ca. 1980s). 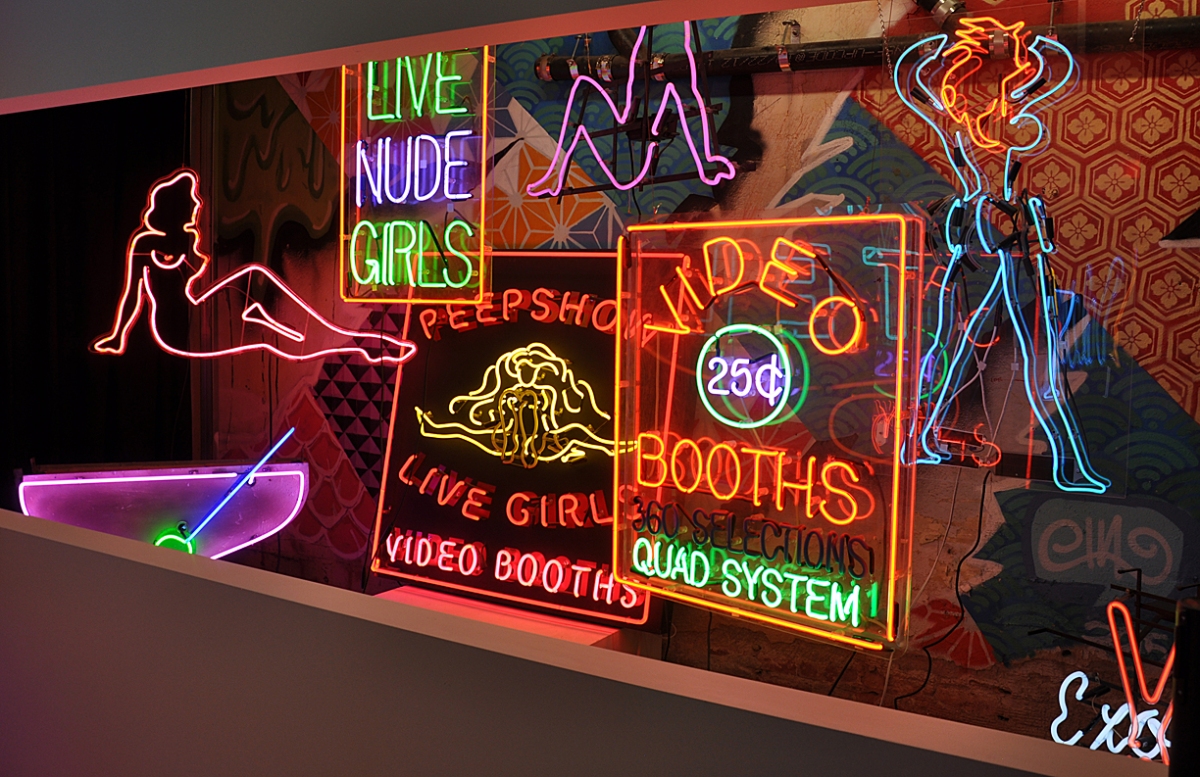 https://www.flickr.com/photos/agilitynut/
I’m planning on a little Los Angeles area trip next weekend (if the weather is right) and then a San Diego area trip at the end of the month.  So, more photos coming up soon enough.

Also, you might be interested in this big 3-day event taking place in San Francisco (April 20-22).  Yours truly will be one of the speakers at the “Neon Speaks:  Festival & Symposium”.  More info here:

Back with more photos soon,