I took advantage of the 3-day weekend and headed up to the Bay Area for some shooting.  Grey skies and miserable weather for shooting for the most part.  I gave up Monday morning & headed home.  Just as well since the traffic was hell.

I think the “kids” might have had a better time than I did.  They spent gobs of time at various beaches running & sniffing while I waited for the sun to come out — which wasn’t until early afternoon or not at all.  I haven’t subjected you to photos of my traveling companions for a while.  So, here’s the crew in Carmel where dogs are legally allowed to romp off-leash on the beach:

Nik (Sputnik) with ears on the alert for the bounce of the ball since he’s about 98% blind: 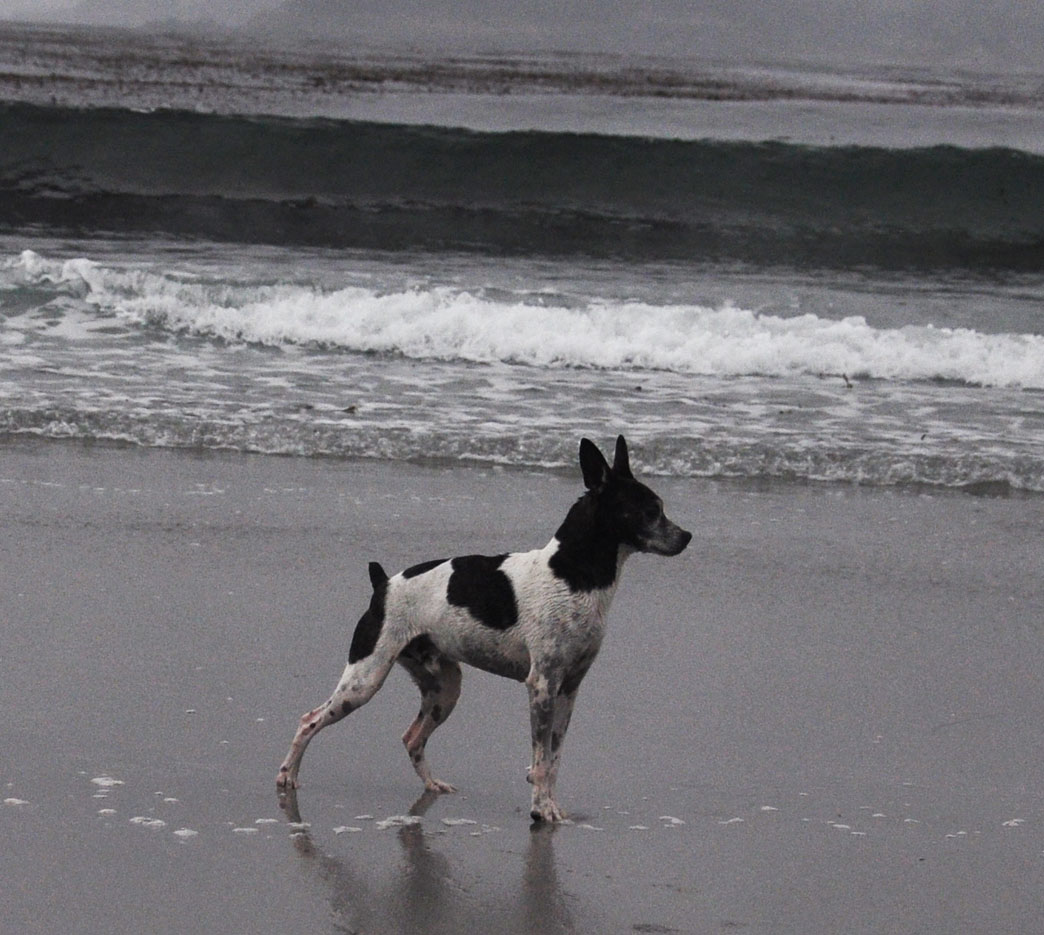 Fixie & Grem (Gremlin).  Fixie is nearly 16 and hanging in there. 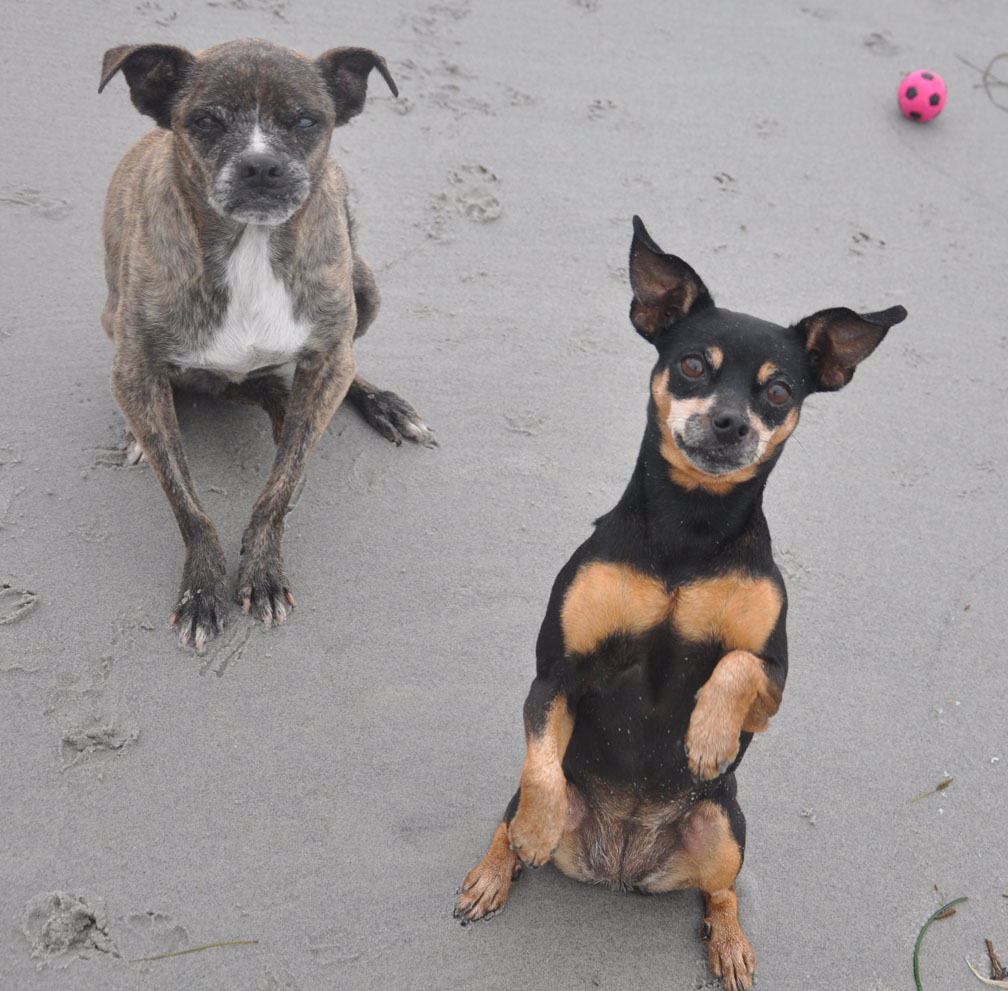 Everybody was pretty wet and cold: 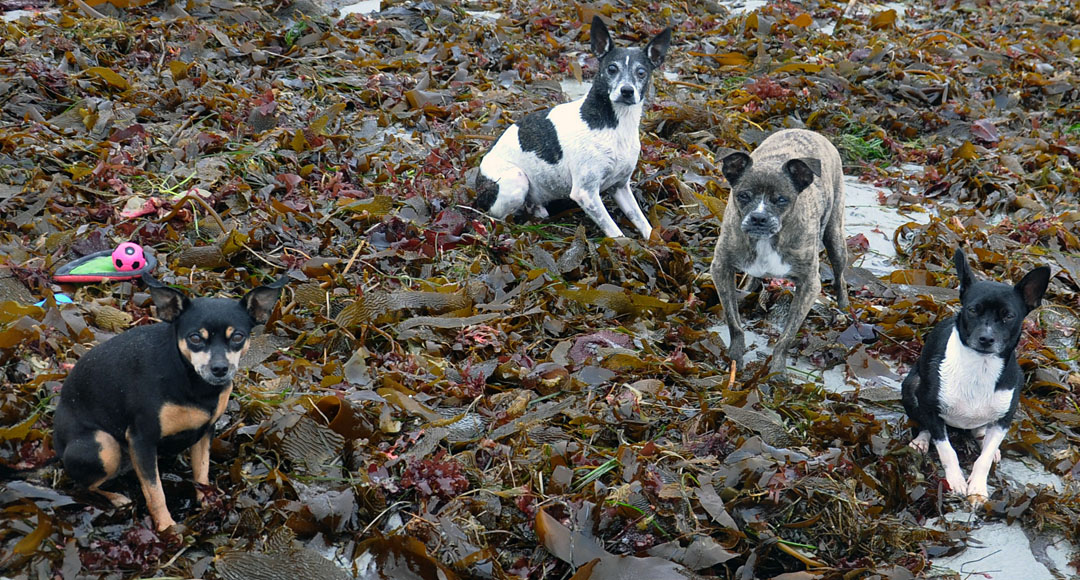 OK — back to our regularly scheduled programming.  Since the shooting was so sparse this weekend, I’m lumping everything into this single post instead of separate posts for each day.

This sign in San Jose was adapted in February.  Here’s my photo from August:

The Bold Knight sign in San Jose is from 1968.   This is what is looked like when it still had the panels:
https://www.flickr.com/photos/ibison4/487448322/
It closed around 2006.  In 2010, the text panels were replaced for the next tenant, Pizza Jack’s.   That place closed in 2013 and the building itself has been demolished although the sign remains.  I’m assuming that there are plans to keep the sign and adapt it for whatever gets built on the lot.

Some not so good news from Santa Clara.  About a month ago, the Western Motel sign was repainted and the neon removed.  The text at the bottom has changed and the simulated wood has far less detail now.  Here’s my photo from last August:

And now — I don’t know if the painting at the bottom is considered “done” yet: 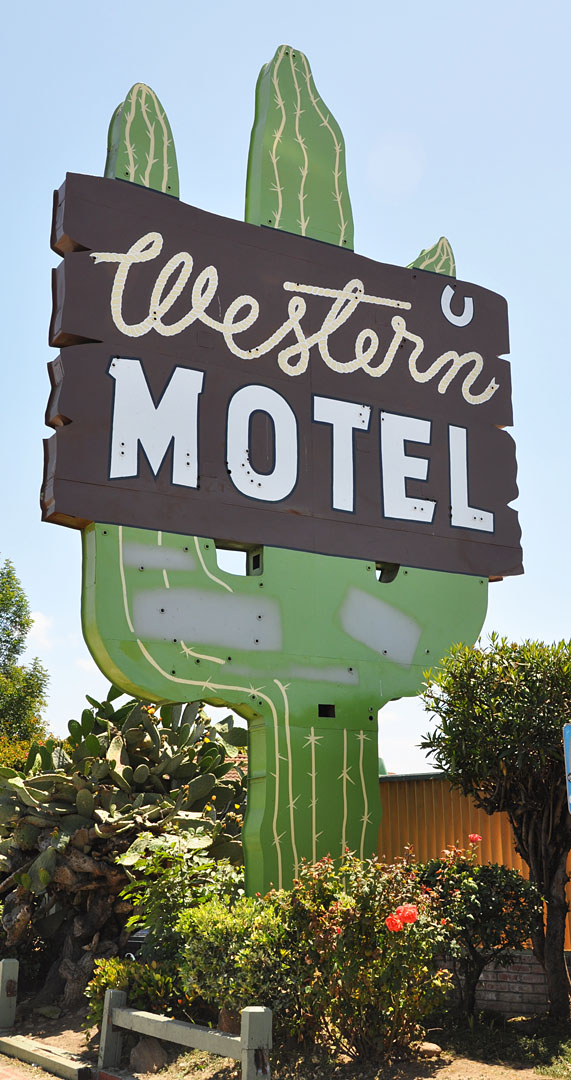 From South San Francisco.  This sign hangs inside South City Lumber (which used to be known as Ace Hardware).  It isn’t lit anymore:

A quick break from the signs — a couple of buildings in Oakland. This IHOP is now a daycare center:

This former bank building housed Global Entertainment, a video store, from at least 2005-2008.  It looks like it’s been vacant for a while.  I think the last bank use was Asiana Bank but I don’t know what bank was here originally.  On-line real estate listings put the build date year as 1974 which looks right from the design:

Since the weather was so crappy, I spent a good chunk of time rendez-vous-ing with people — something I just about never do.  I went to Hayward to see Bruce Kennedy at Bell Plastics who has some new acquisitions.  He’s added a Doggie Diner head, a few funky dinosaurs from Texas, and this Big Boy to his collection of giant statues.   It’s been messed with a bit — earrings and brass knuckles added:

I don’t know if this Big Boy is a copy or one of the very rare what-I-call “Suspenders Bob” statues.  Normally, the Boy is holding a hamburger on a plate aloft in his right hand.  These statues have the exact same pose but the statue’s right hand is against his chest.  I don’t know how many of these were built but there were only two on display that I know of — both in Michigan (Livonia and Ann Arbor) and both gone now.  Here’s the statue in Livonia which I shot in 2011 with my crew:

I also got to meet Jim Rizzo at Neon Works in Emeryville who has a nice collection of neon signs in his shop.  I think all of the signs are from San Francisco.  He’s never actively pursued the signs.  They were just donated to him in exchange for removing them.  Here’s a little article about Jim:
http://xpress.sfsu.edu/xpressmagazine/2015/04/27/the-man-with-the-neon-crown/

And here’s a sampling of the signs at his place: 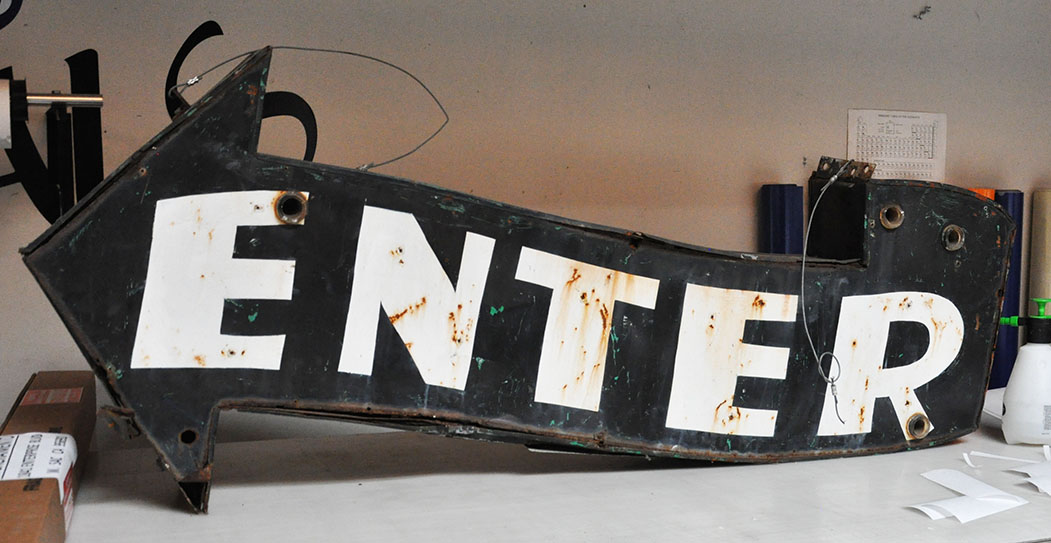 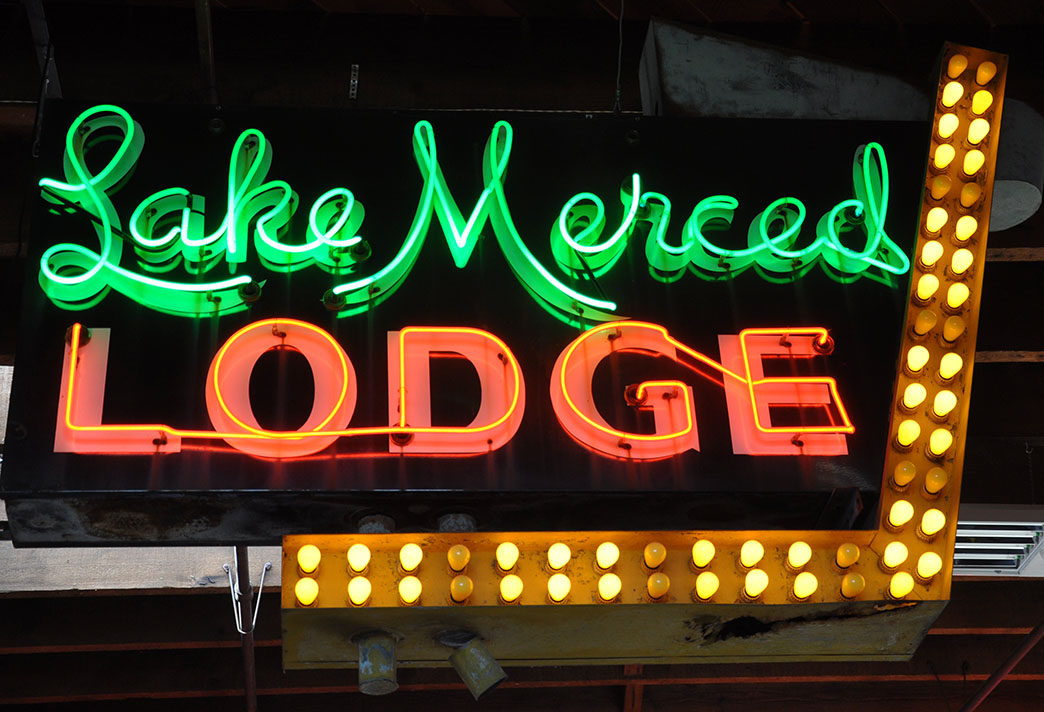 The sign that I had most wanted to see in his collection was the Quality Donuts sign.  It’s still in two pieces but he plans to restore it at some point and stand it up in the yard behind his shop.  It is the twin sign to the All-Star Donuts sign in San Francisco:
http://www.roadarch.com/14/12/allstar.jpg 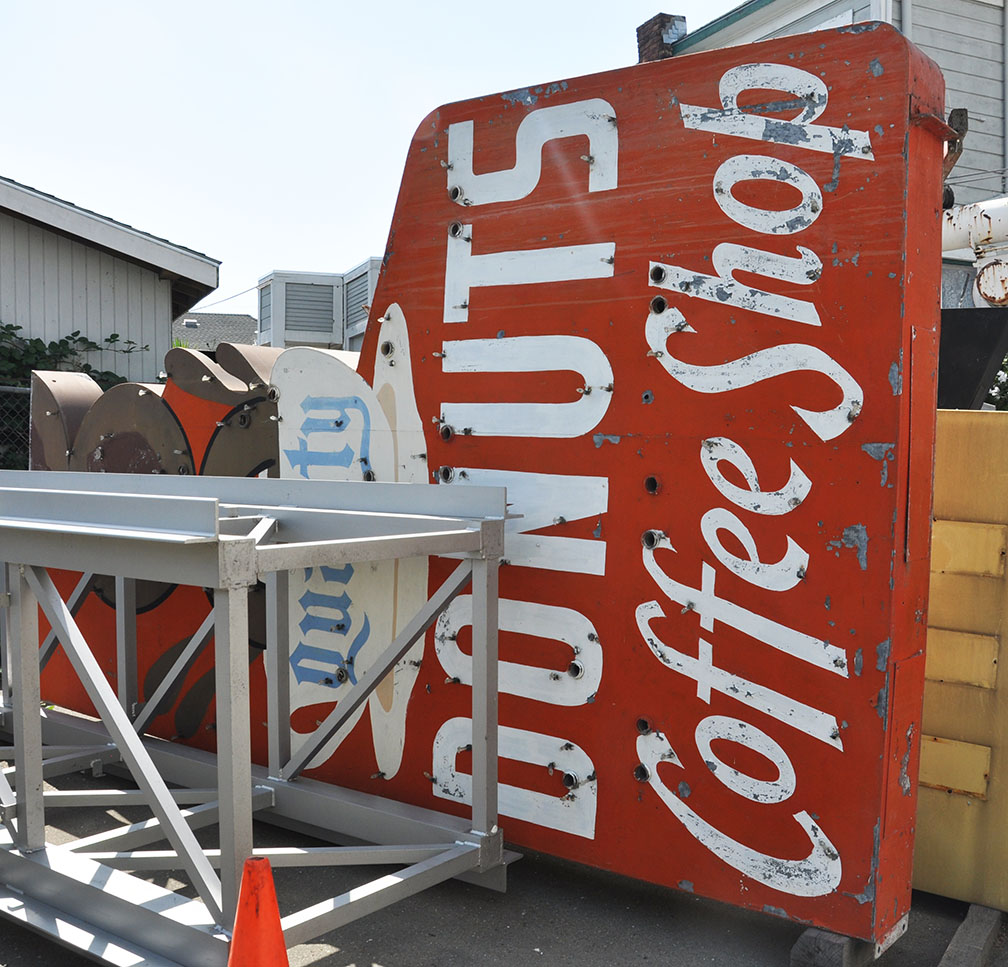 At least the grey skies didn’t interfere with a little nighttime shooting.  This sign in San Francisco has been painted a dull bricky orange.  There are red porcelain enamel panels underneath — and mysterious text behind “Market”:

The Tribune Tower in Oakland is very pretty at night:

In March, bulbs were added to the Ferry Building at the foot of Market Street in San Francisco to commemorate the centennial of the Panama-Pacific International Exposition.  This is how the building would have appeared at night then.  The bulbs will be removed in December:
http://www.latimes.com/travel/california/la-trb-san-francisco-1915-exposition-20150305-story.html

I don’t know if this YMCA sign in San Francisco is the “real deal” (a well-maintained vintage sign), a replica, or retro (new made to look old).  Here’s a day shot if you’d like to form your own opinion:
http://www.roadarch.com/14/8/sfy.jpg

I know this sign in S.F. is new since Golden Boy Pizza opened in 1978: 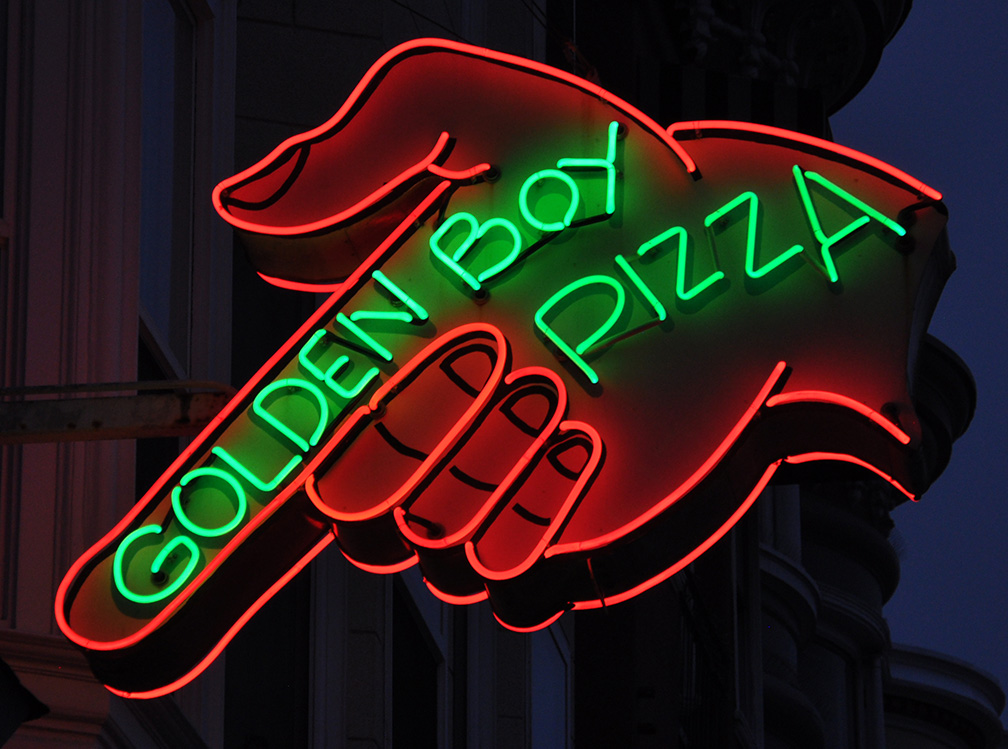 Okay, that’s it for now.  For those of you that are interested, I’ve been slogging away the map-adding project at my website.  About 1/3 of the way through the Mid-Century section and the Signs section to do after that.  The dogs and I will be back on the road for the 4th of July weekend with a Central & Northern California trip.

More photos from this trip over at Flickr:
https://www.flickr.com/photos/agilitynut/
Take care,