I was shocked after such a sunny Saturday to have a hazy, useless grey Sunday morning in Brawley.  I waited and studied the skies a bit — but it didn’t look like it would get better anytime soon.  So, I shot what was there (which wasn’t much) and moved on.  Here’s the White Cross Drugs store which is still in business.  The two sign panels must have been a single projecting sign originally:

Still in Brawley.  No businesses or buildings anywhere near this sign.  I love the bits of neon which still cling to the sign:

Moving on to Indio.  I think this place is still in business:

Done with the desert & onwards towards L.A.  This place is in Corona: 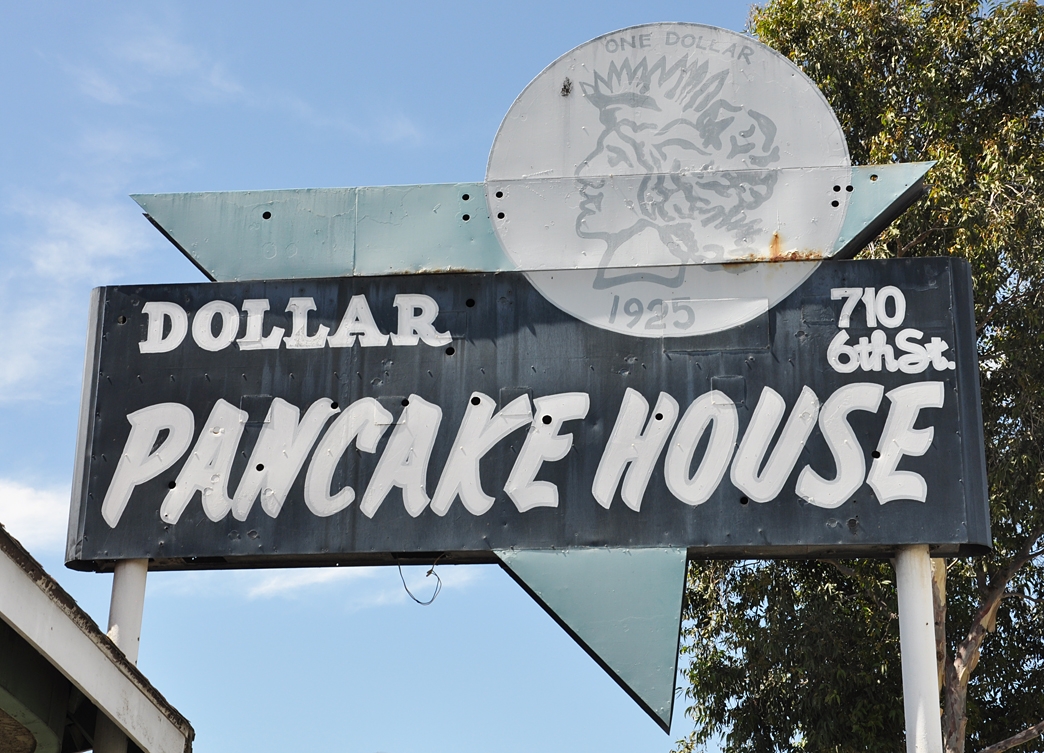 The building itself is pretty quirky.  Was that shingled canopy a later addition?  Was the building

The traffic in L.A. was insane and I cut the day a little short.  Mostly, to deal with a computer glitch that happened that morning.  After a schlepp to and wait at Best Buy, it turned out to be nothing.  Or at least I hope so.  The laptop wouldn’t power up for me after trying about five times.  Something about maybe not holding down the button long enough.  Huh?  I’ve never had to hold down the button — just pushed it since I’ve had this thing for six months.  So, now I’m holding my breath and holding the button down and all seems fine.  Whatever.

I’ll leave you with this gigantic sign from Los Angeles which has it all:  mixed fonts, plastic, neon, bulbs — and just the grooviest arrow.  I also love that inexplicable, random blue piece below the arrow and the rocks at the bottom:

For more photos from this weekend’s trip, don’t forget the stuff over at Flickr:
https://www.flickr.com/photos/agilitynut/

I’ve penned in another L.A. trip a couple of weeks from now to get more serious with this list.  That desert heat and boring stretches between stuff really wiped me out.  So, I’ll be back with more photos before you know it.  Thanks for tuning in!

One thought on “More from this Desert-ish Weekend Trip”