I wanted to make sure I’d have good weather for this little desert trip — but I think I waited a little long.  Although it just turned spring, I think it was over 100 today.  I’m happy to report that Sparkle’s A/C is working very well these days.

I braved the Friday night traffic and hoped with the time change that I could get more shooting in.  But I only got to a few things before that awful “golden hour” set in.  At least I got to see the completed restoration of the Idle Hour in North Hollywood.  Miracles do happen!  After sitting vacant since 1984, the giant barrels are finally back in action. 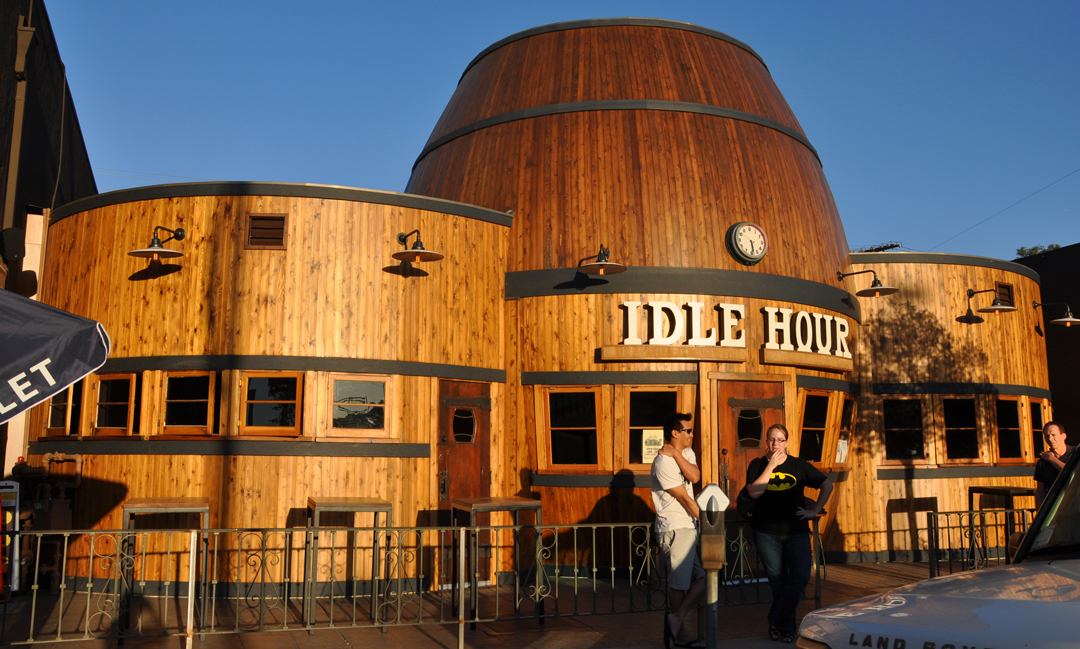 And a framed vintage photo from 1941 inside the bar: 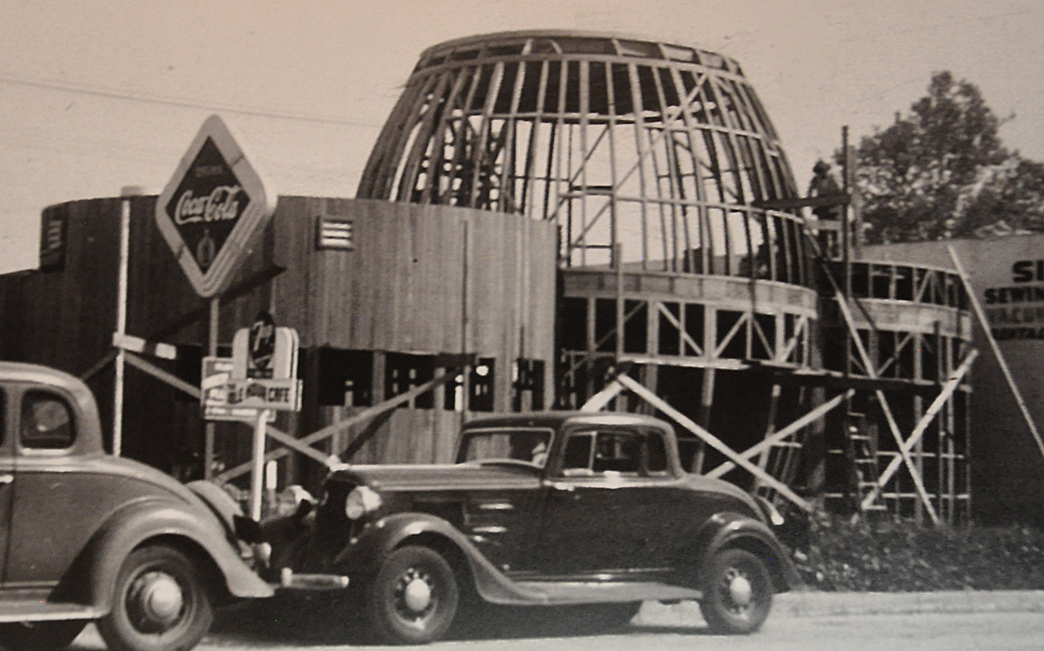 The lighting was kinda sucky — but here’s the “rescue dog” in the back patio of the Idle Hour.   This doggie was built in 1994 for the Petersen Automotive Museum.  The museum decided this guy didn’t fit in with all the revamping going on.  Kinda like deciding your dog doesn’t match the new furniture, isn’t it?  Well, at least he’s got a good home now.  This dog is a recreation of the Bulldog Cafe which was built in L.A. around 1928:

Up and at’em early this morning in Burbank since there was mucho driving to do.  At dawn, a great illegal retrieving session with the dogs at some golf course like recreation center since I knew it would be too hot later on for any romping.  Too early for good photos but here are a few anyway.  Samuel’s Florist in Burbank:

And Compton’s Shoe Repairing in Burbank: 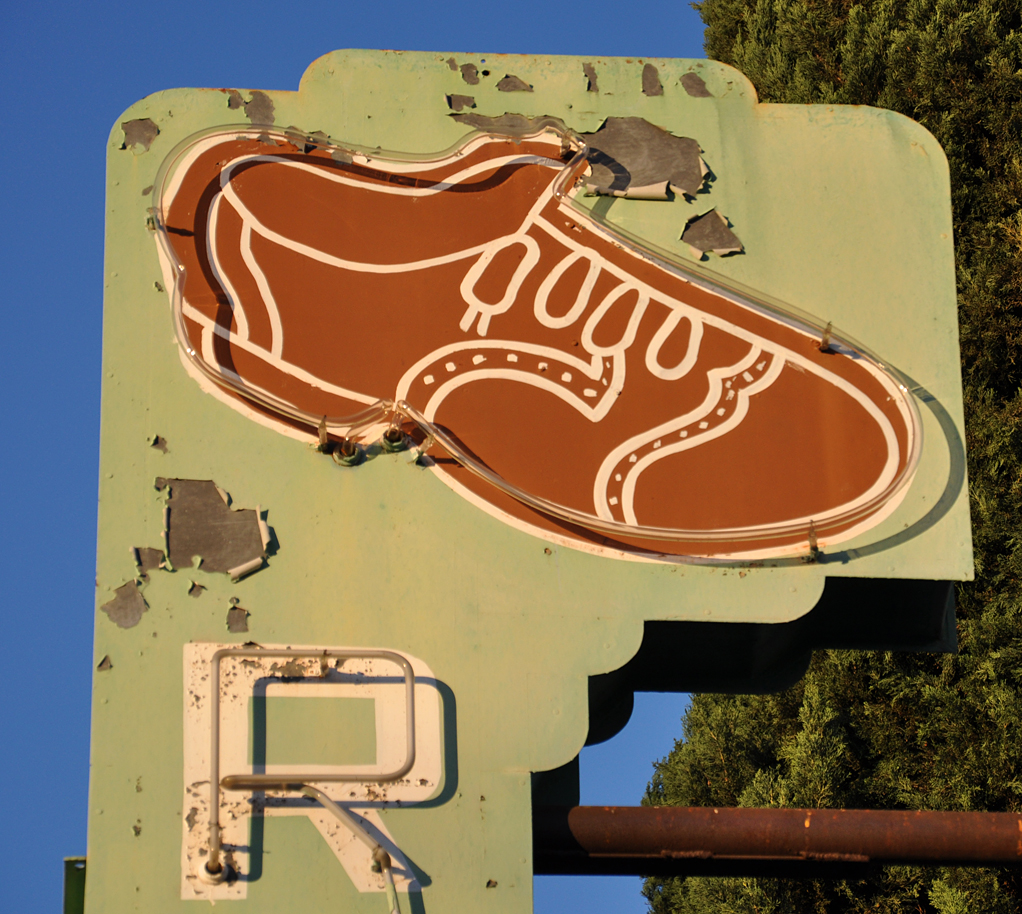 I stopped for a quick peek in Glendale at the new sign installed at the future home of MONA (Museum of Neon Art).  A kindly electrician let me in to see the progress of the place.  In an article I read just this week, the museum was due to open “later this year.”  However, this guy said they should be done with construction in a two or three weeks.  This sign is a replica of the one that was installed in Westwood.  It was too far gone to restore.  The neon drips will be sequentially lit like the original.  That’s the replica diver sign poised on the corner of the museum building in the background:

I’ve been to Pasadena countless times but never noticed this guy until today.  The rooftop sign:

and the cool storefront below:

These Farmers Insurance signs are getting very rare.  I think there are only two or three left in the country.   This one is in Redlands: 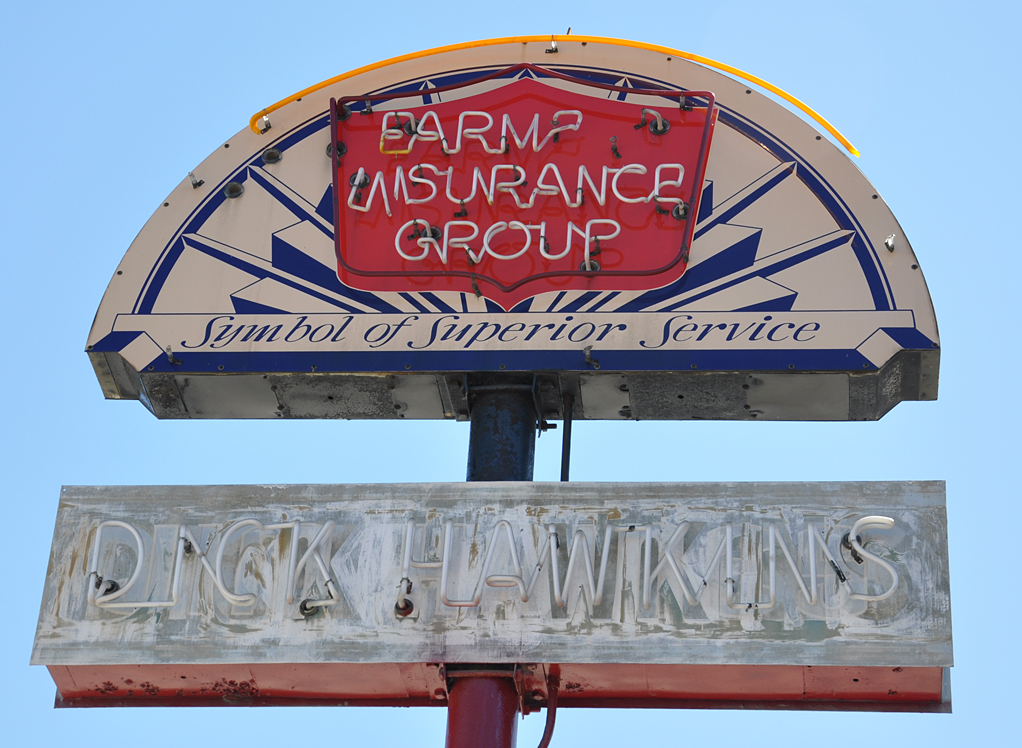 This incredible sign is in Yucca Valley.  I don’t know what it advertised for originally.  Note the pigeon posing right below the buffalo for scale: 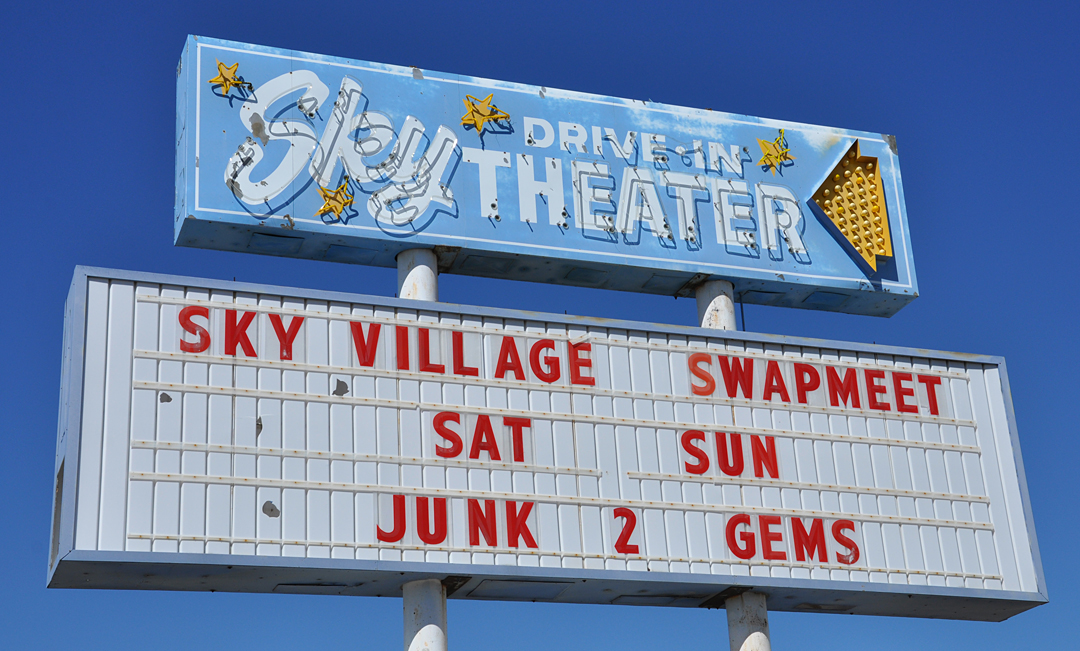 On to Twentynine Palms where there is a sign junkyard in somebody’s backyard.  No hole in the fence — believe me, I looked! 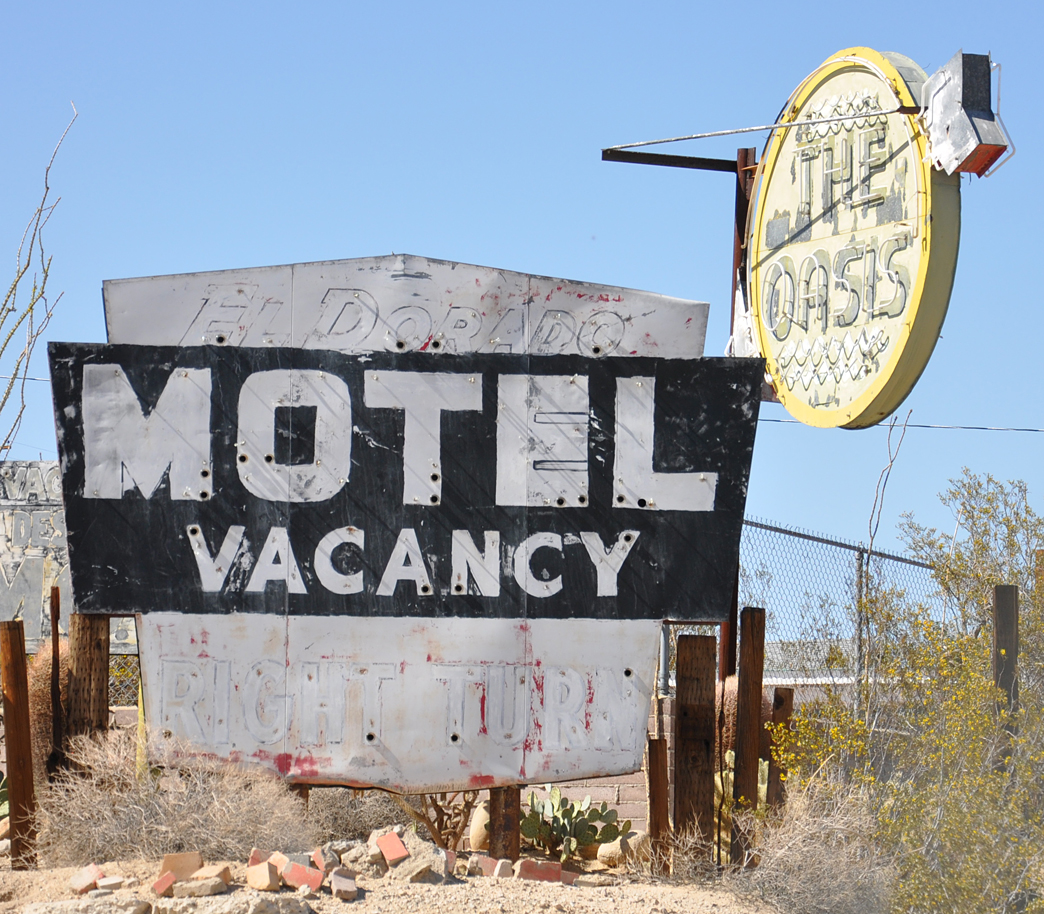 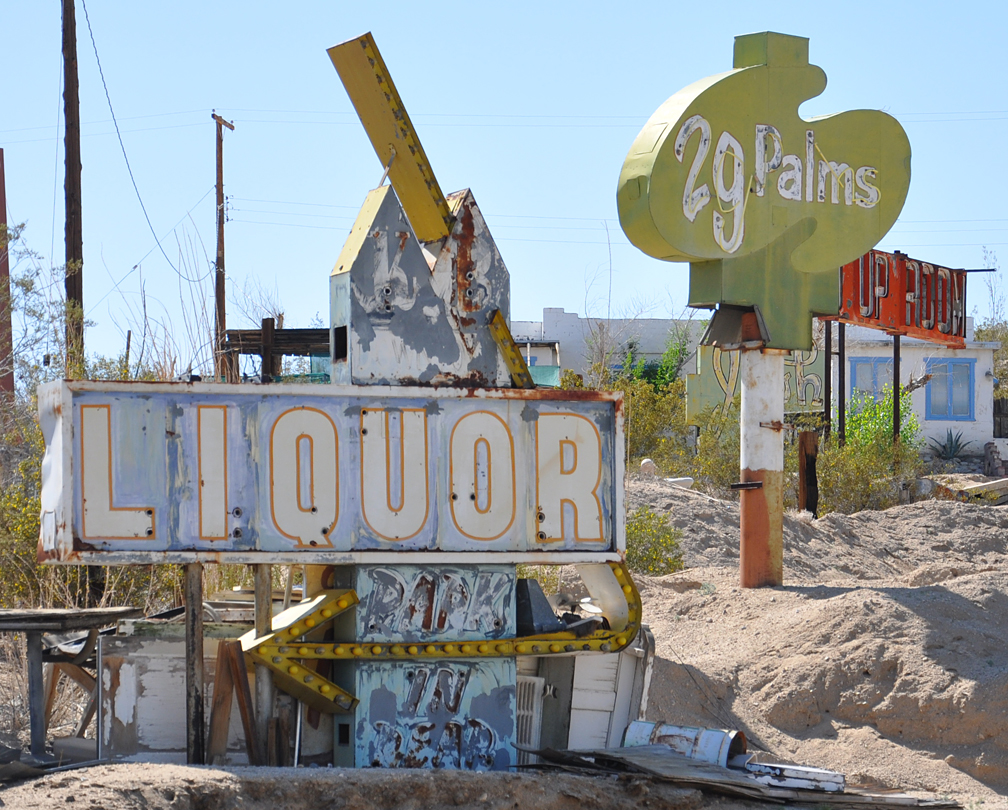 This abandoned gas station & cafe are in Desert Center.   The cynic in me had me thinking that this was used for some recent film or commercial.  Those pumps seem awfully nostalgic:

And this sign with the 3-D effect just had to be modern:

But then, I see this 1940s vintage photo at eBay now & I wonder how vintage this place is — maybe the sign was revamped recently?
http://i.ebayimg.com/images/g/NMkAAOSwBahVFAsg/s-l1600.jpg

On to Blythe.  At first glance, I figured this had to be a former Denny’s.  But, no, the waitress assured me that the Courtesy was built in 1964.  And the building is actually different.  The boomerang roof is actually pretty short and with a different look from the front, it was probably different enough to prevent a lawsuit:

The interior is gloriously intact.  However, the waitress said that the owner will be remodeling it later this year.  Uh oh!  If you’re into vintage coffee shop decor, you might want to hop on the I-10 the first chance you get:

More stuff from Blythe for the remainder of this post:

I’ve never seen such a marvelous arrow tail loop before.  A pity what’s become of the rest of the sign:

I’ll leave you for the night with one more lovely relic:

More shooting tomorrow here in the desert and then on to some L.A. stuff before the long drive home.  I’ll get back to you on Monday or Tuesday with that final post.

In the meantime, more photos from today over at Flickr:
https://www.flickr.com/photos/agilitynut/

—  Night-night from dj & the dogs in Brawley