Not quite April in Paris — but good enough for me!  I’m pretty much done with SoCal trips — although there will still be some L.A. area stuff now & then because of Nik’s eyeball checkups.  We’re moving on to the Central Valley for a bit.  Then it’ll be back to Bay Area weekends for a while.   I’m gradually chipping away at northern California but it takes times since I can only get away weekends for now.

The day started in Arvin (just south of Bakersfield) which was depressingly smothered in clouds.  Even more depressing was the number of stray dogs — many limping around on three legs.  A pair of skittish Chihuahuas.  Heartbreaking.

What brought me to Arvin — this guy — who’s been on my list for years.  I’ll be back on a sunnier day.  Very few of these statues outside of Michigan — more about them at my website here:
http://www.agilitynut.com/eateries/caesars.html

Also in Arvin:  a fairly huge gas station sign — most likely not the original design: 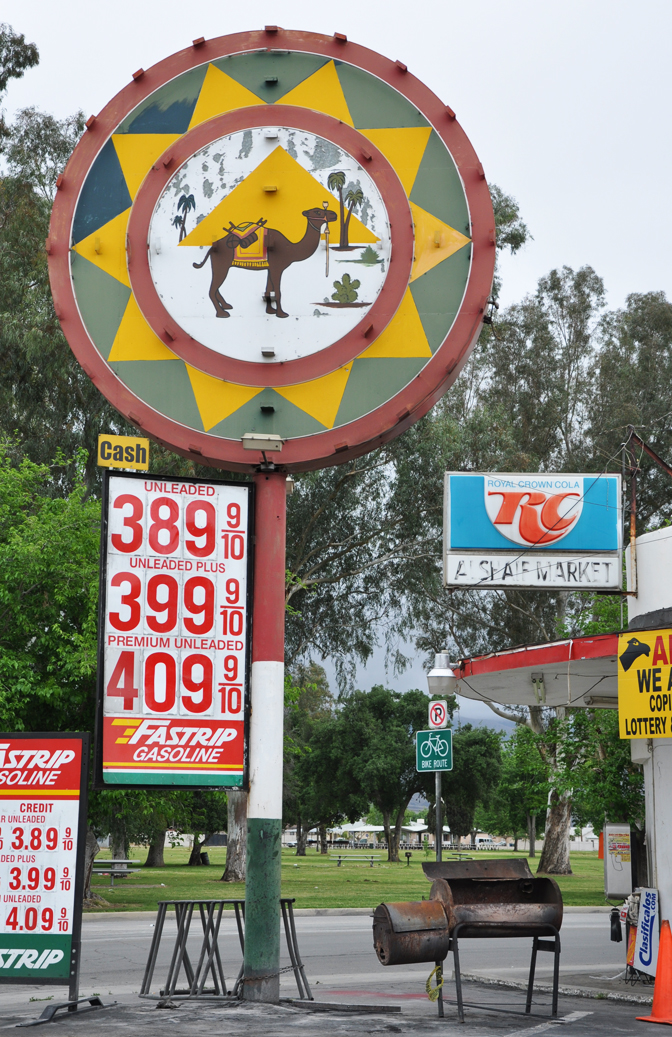 The weather wasn’t much better in Bakersfield.  Here’s an interesting round building which is now skanky apartments.  I’m assuming a motel complex originally.  Maybe an upstairs restaurant?  Beware of the dog indeed — a grey Pit Bull lower right giving us all the hairy eyeball — and my silly, wimpo terriers inside the van egging him on with their nutso barking:

On to Coalinga — sun at last! 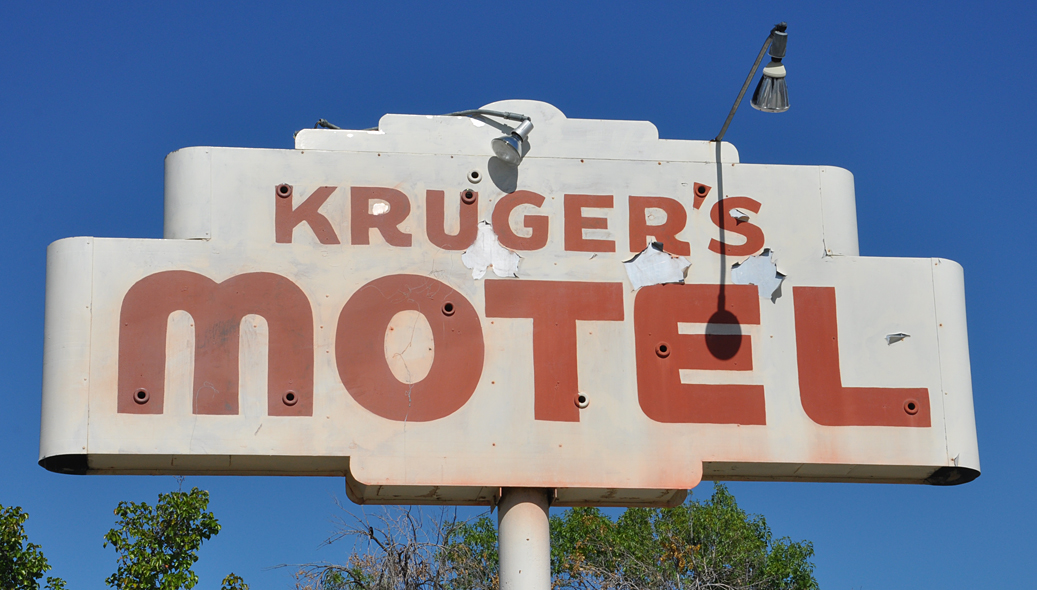 Still in Coalinga — a former Sno-White Drive-in.  A re-purposed sign but the building was nothing special.  More examples of the chain at my site here:
http://www.agilitynut.com/eateries/casno.html

One more from sunny Coalinga:

A couple of signs from Lemoore:

This one says in broken English “mufflers” but I’m thinking maybe a Chevrolet or Pontiac sign originally.  I’m too tired to check on designs right now:

Two from Reedley — a closed bar:

and a vacant shoe store.  Note the Red Goose logo which would have looked like this originally:
http://www.agilitynut.com/10/4/redgoose.jpg

From Orange Cove — which was delightfully fragrant with orange groves in bloom.  Unfortunately, this theatre has gone the way of far too many others.  Maybe if we all pray hard enough, this building will be turned back into a theatre?

On to fabulous Fresno.  A skeleton of a sign.  I like the semi-sputnik with bulbs on top.  And the puffy clouds always help.

Repainted drably and denuded of neon but still some dignity left:

This one has to be 1920s-ish with its little rope-y border & most likely opal glass “Beauty Shop” letters.  It would have been a hanging, two-sided sign.  You can still see the wire rings on top of the panels which would have supported it.  And the other side of the sign is flat against the building now.  Am I imagining lavender-colored tubing?

Surely, the yellow piece must have been painted transmission-like:

This stash of vintage signs is at Commercial Neon Inc.  I had to shoot through the fence from pretty far back.  But some of you may recognize Me-N-Ed’s Pizza, Cedar Lanes and other Fresno signs.    The Ronnie’s Midway Market sign is also here:

After a long drive in the pines near Yosemite to shoot some signs & bear statues, we called it a day in Merced where there are many lovely things to shoot at night.  I decided to treat myself to dinner-to-go at Marie’s and help foot their electric bill:

I knew it was meant to be when I saw a cigar store Indian right by the door.  I’ve had a bit of an obsession with these statues lately and have added loads of them to my lists for all over the country:

A cute interior with lots of 7up signs since the neon 7up sign is right next to the restaurant (see my Flickr photos from tonight):

Here’s my chow — two cheese enchiladas.  I have to be honest and say it was on the bland side.  Maybe they toned it down for the gringa?  But I’m sure if you dine in, you can ask for it spicy.   Still, I have a happy tummy & the dogs were delighted to share & lick the container when I was done. 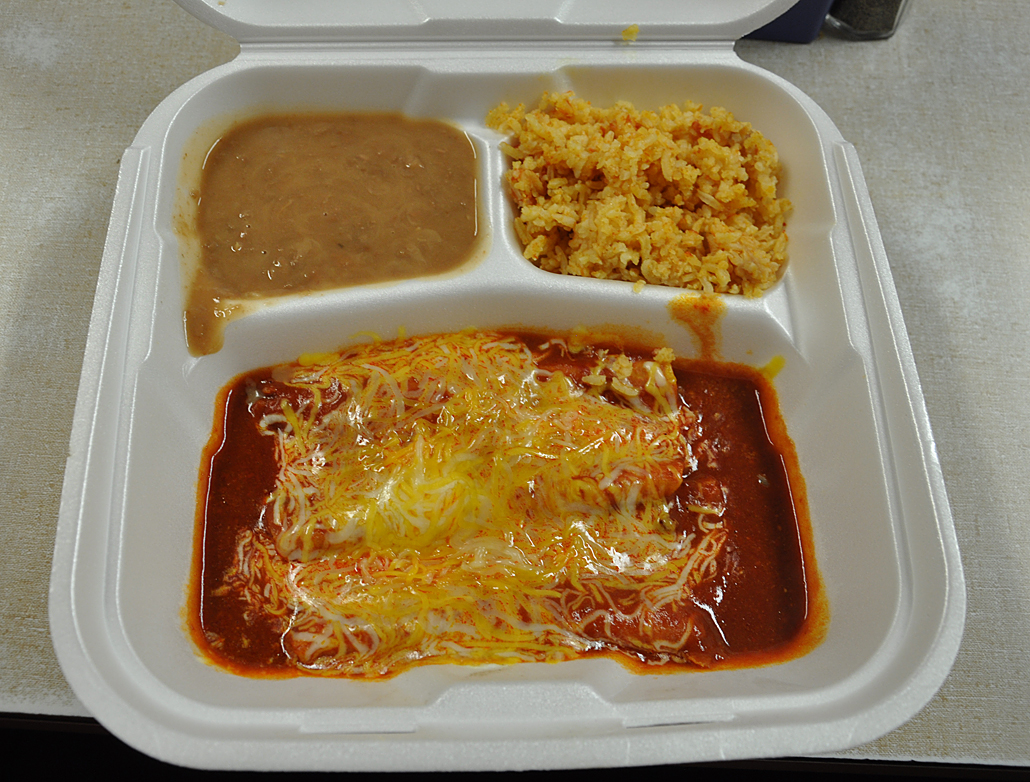 Fantastic font, no?  Major police activity going on here — I literally jumped out of the van, shot & scurried back inside.  Not fast enough though — a policeman pointed a flashlight inside my van & made a face at me as I drove off and sort of waved.  Sheesh.

And appropriately, this is what I’ll be doing shortly: 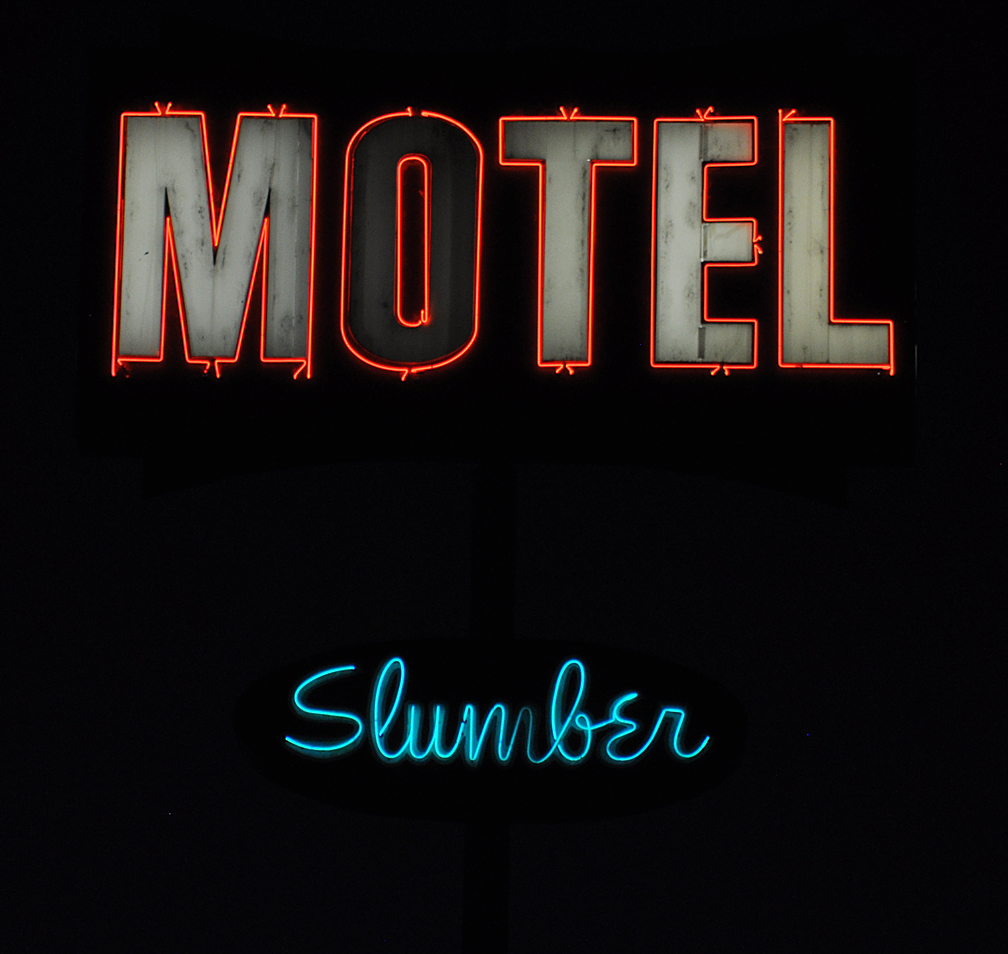 Lots more shooting tomorrow.  Merced by day, Madera & lesser towns.  I’ll post the wrap-up on Monday or Tuesday.  Meanwhile, here are some other goodies which I posted from today at Flickr tonight:
https://www.flickr.com/photos/agilitynut/