No news from the battlefield here on the beach.  Still job-hunting in Ventura in this miserable economy.  Lots of $9 an hour jobs out there.  Which is fine if you’re shacking up with family and friends.  Gonna try my luck this week at the agencies in Santa Barbara.  If that fails, move on to prospects in the Los Angeles area.  At this point, I don’t care where really.  I just want to have any old office job, a permanent roof over my head and a routine of some kind.  But as we enter the holiday season, things are slowing down, hiring gets put on hold.  So I might just have to suck it up til January.  Ugh.

So, since I had to go down to my storage unit in The Valley, I came up with a little to-shoot list and made the most of the day.  I don’t mind L.A. that much really.  It is kinda fun.  But I’ve lived there before and could do without the aggravation.  Traffic.  Ventura is just so much prettier, quieter, saner.  But I’m growing impatient.  And the “recruiters” I speak to here are not all that optimistic.

Taking breaks to run the dogs on the beach and at various parks perks me up when I start to get depressed.  Taking photos and driving around also gets my outlook back on track.  Joy!  Sun!  Fun!  So, here’s some of what I’ve been up to.

It seems every day I pass either a Coco’s restaurant or a Carrow’s restaurant that carries Coco’s pies.  A big truck and/or sign about them.  So…. one hungry afternoon, I gave in.  The choices, at least at the one by the beach here, were of the cream variety:  chocolate cream, coconut cream, banana cream.  Apparently, they also make apple & cherry & that sort but I don’t remember seeing them:
http://www.cocosbakery.com/menu/cocos-premium-pies-desserts

I went with the seasonal offering:   the Harvest Pie — which is pumpkin pie with pumpkin chiffon on top.  Great!  I will be back another time for another flavor:

Oxnard is where most the interviewing at the agencies takes place.  So, one night I hung around long enough (went to Port Hueneme’s Kiddie Beach which is great for dogs) and got the Wagon Wheel Bowl sign.  Here’s Sparkle basking in it:

OK — on to the ventures “over the hill” (the Conejo Grade, into “The Valley”).   A shot of the mailbox in Northridge created from a Bob’s Big Boy arm:

From Burbank.  I love freestanding neon — and apparently so do the birds:

Caught at a stoplight.  Seems like quite a long hearse to me — but I’m no expert:

I believe this geodesic dome in Glendale was originally a cleaners.  Now, it’s unclear what it’s used for.  Possibly storage for the medical place or doctors’ offices next door:

From Los Angeles proper — a faded oldie with a freestanding arrow:

and the motel itself:

Another surviving motel in L.A.:

Two of my passengers basking in the front seat with non-stop sun.   Grem (on the left) never really sleeps.  Hardly ever.  The seniors were snoozing in the back.

I went downtown to see what they’ve done to the Felix sign (see Flickr photos tonight).  And also to shoot the statues inside which I had missed the last time I was there.  A salesman said confidently that they (there are three of them I think) are from 1927.   As I was taking this photo, a car came flying around the corner and hit about five cars parked directly in front of Sparkle.  Bumpers and fenders flying everywhere.  I was greatly relieved when I ran outside to see we didn’t get a scratch.  Thank God!  I’ve had enough hell just getting that bumper replaced when I was rear-ended.

And now for a little diversion — I decided to check out the Petersen Automotive Museum in Los Angeles.  Mostly, just to see the new (old) Pep Boys statue (see my Flickr photos tonight) — and this recreation of the Bulldog Cafe.  The pipe emits steam: 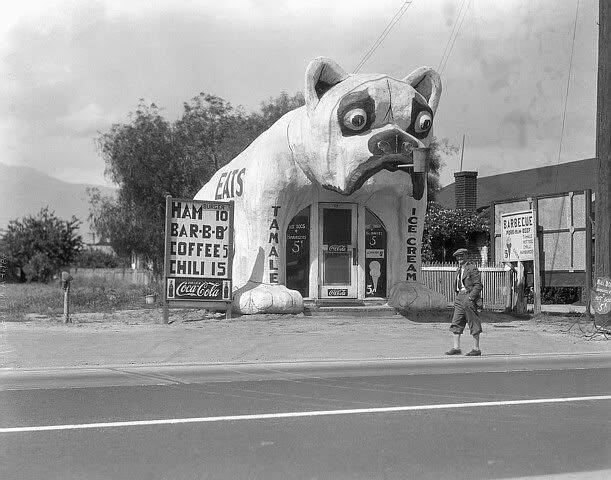 OK — and a whole buncha cars.  I took way more photos than I’ll subject you to here.  I didn’t take notes so I can’t help you with identification:

There is also a nice little gallery of motorcycles:

I don’t know if this Jamm’s sign on display is vintage or new — but it is a killer.  Neon outlining and then the bulbs of each letter fill up in sequence.  Then, with the letters full, the sign goes into that dizzy scintillating mode.  It’s hypnotizing.

So that concludes our little “cheer-DJ-up” tour.  More to come soon enough…