First off — thank you all SO much for your good wishes and positive energy during this “transition”.  It has really helped put things in perspective and take a bit of the stress off knowing that so many of you are pulling for me.  I’m trying to focus on the opportunity of the situation.

Sorry it’s taken a few days to update you about our whereabouts and whatabouts.  I’ve been waiting for a sunny day so I could take some photos for ya.  A lot of fog here — but still pretty much paradise. Yes, we arrived safely, in record time.  The cab of that U-Haul truck was much smaller than any of us were used to.  Much barking and misery for nearly 3,000 miles.  The movers came Monday morning and loaded up the U-Haul.  I got the super’s seal of approval on the cleanliness of the apartment.  Then, off to U-Haul to put Sparkle on the trailer behind the truck.  While waiting for that event, some impatient New Yorker raced into the parking lot and took out my truck’s passenger mirror, arm and all, with his U-Haul truck.  So I had to wait for that to be replaced.  I finally got going in the afternoon.   I paced off the length of us — from the nose of the truck to the end of the trailer:  33 feet.  Therefore, no roadside photo-taking along the way.  But here was one gas-up in Pennsylvania after some rain:

I spent Monday night in Columbus, OH (538 mi); Tuesday night in Tulsa, OK (816 mi); Wednesday night in Gallup, NM; arrived L.A. area afternoon Thursday (731 miles).  So, three days of driving.  And not soon enough! Some stats for those of you that like that sort of thing — or for those of you considering a cross-country move.  It ain’t cheap!!  I could not have done it at any other point in my life other than now with my investment banking days’ package.  I’m gonna be making a fraction of those wages now I think.

Oh, and the week of the move, Sparkle’s transmission went — another $2,000.  I’m told her engine is shipshape.  So, hopefully she’ll carry us about for many years to come.  She deserves to spend her golden years in the California sun.  As do the five of us!!  The dogs have been to the beach at least twice per day — and then off to some park or another daily as well.  They’re quite digging this place.

I’m focusing on Ventura right now as my potential settling spot.  It was my birthplace and home for roughly the first 20 years of my life.  It took all this time to truly appreciate its wondrous-ness.  Gorgeous plants, palms, flowers everywhere.  Mid-century buildings everywhere.  And even a handful of sweet neon signs.  A lengthy beach and laid-back parks for the dogs to romp.  Perfect weather pretty much year-round.  No traffic or parking hassles.  Courteous people.  What more could you ask for?  Culture, restaurants, nightlife — oh, I don’t need any of that.  But I suppose they have that here, too.

So, I’ll do my damned-est to find a decent-ish job and some little ramshackle apartment here that’ll take four dogs.  Waiting for a tailor to hem my interview “costume”.  He said it’d take a week — but I begged him down to five days.  He’d be out of business in NYC at that pace!   Job hunting sucks but I’ll try to be patient.  I have time and money in my favor at this point.  I’m sure wages would be better in L.A.  And my skill set would be better appreciated there.  But I would rather be more broke and more relaxed at this point in my life.  Pre-retirement is how I’m looking at it.  When Social Security kicks in 10 or so years from now — I’ll be back on the road with a vengeance and no deadlines to get back home.  Wherever that is.  In the meantime, I assume I’ll have weekend trips to document for ya.

On with the photos then — and there are lots of them!!  Today (Sunday), finally, the fog and clouds broke up at noon and I made a mad dash shooting all around town.  Ventura — by the way the “tur” is pronounced like “turnip”.  Out-of-towners say Ven-tooo-ra.  The place is also known as the Poinsettia City (named after those red Christmas flowers which do grow here).  And which, if I remember correctly, locals call “pon-zet’-a” not “poin-set’-i-a”.

Purple flowers — no idea of the name:

The best example of Polynesian / tiki style architecture in town:  the Tonga Apartments: 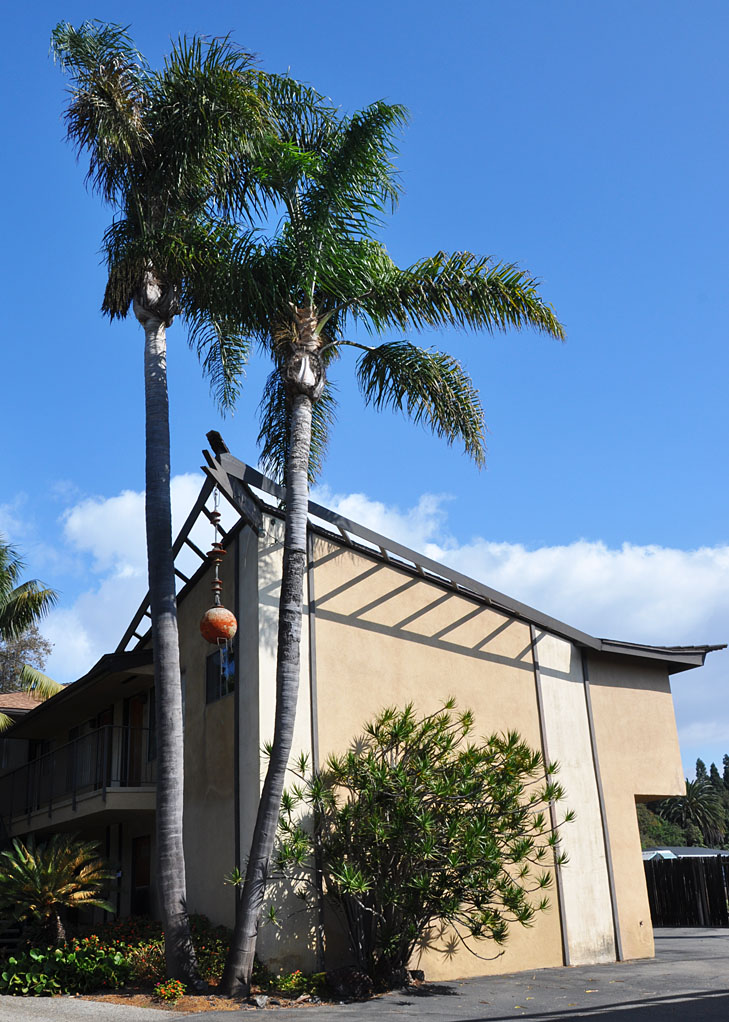 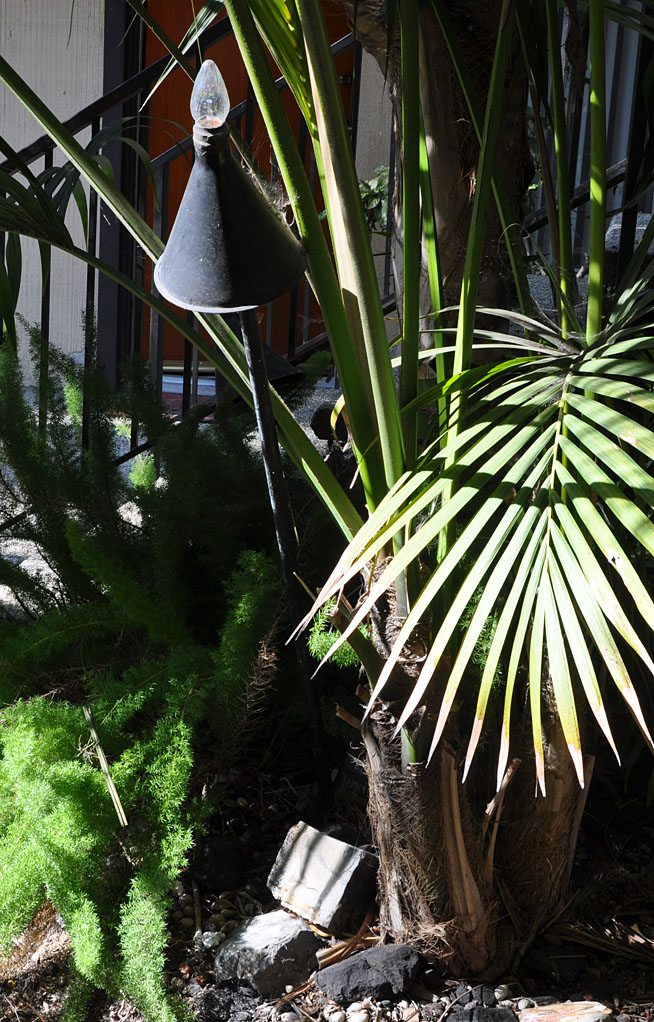 Some mid-century buildings and details.  This one has those hanging ball lamps and stairs just visible thru the glass at the left — and a neat sun screen on the right: 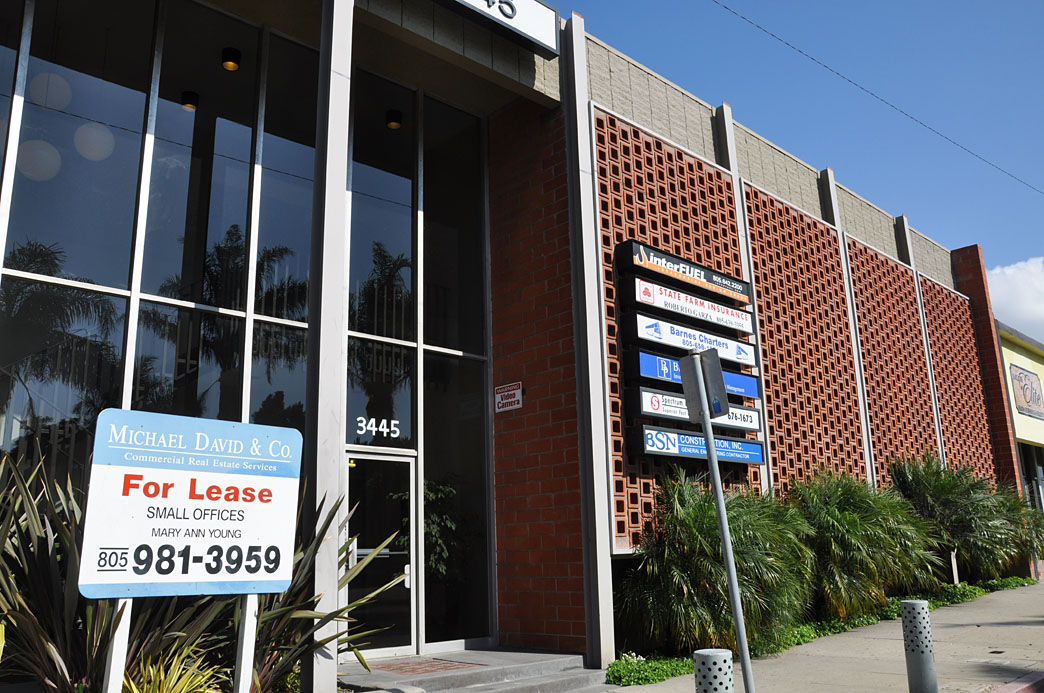 Cantilever roof and awning — this is actually the tailor which is holding my interview clothes hostage for a few days:

The Mission Bell Motel — I’m uploading some night shots of the signs to Flickr tonight.  If I remember correctly, my parents and I used to eat at the little building on the right which is now an ice cream place.  I don’t remember the food but I do remember getting these free peanut butter flavored candies (instead of mints) on the way out the door.  Maybe they were Mary Janes or Abba-Zabba or something else.  Note the neon bell on the chimney:

Note another bell on the building next door at the left.  Also those hideaway car ports for each motel room.  And what amazing shrubbery!

I think this was the Loop’s restaurant for the motel next door (photos at Flickr tonight).  But maybe not.  That plastic ball & the plastic sign seem pretty vintage.  Another metal screen:

A seemingly infinite variety of palm trees and exotic shrubbery around town:

Five Points is an intersection with a convergence of five streets.  I believe this was the same business here when I was growing up.  But maybe that is a repurposed Union 76 gas station sign:
http://www.flickr.com/photos/andrew-turnbull/6182161571/

I believe this was the hospital I was born in.  I can’t check since my birth certificate and worldly possessions are off in storage in Los Angeles right now.  The Community Memorial Hospital — undergoing some additions — so this view might not be for long: 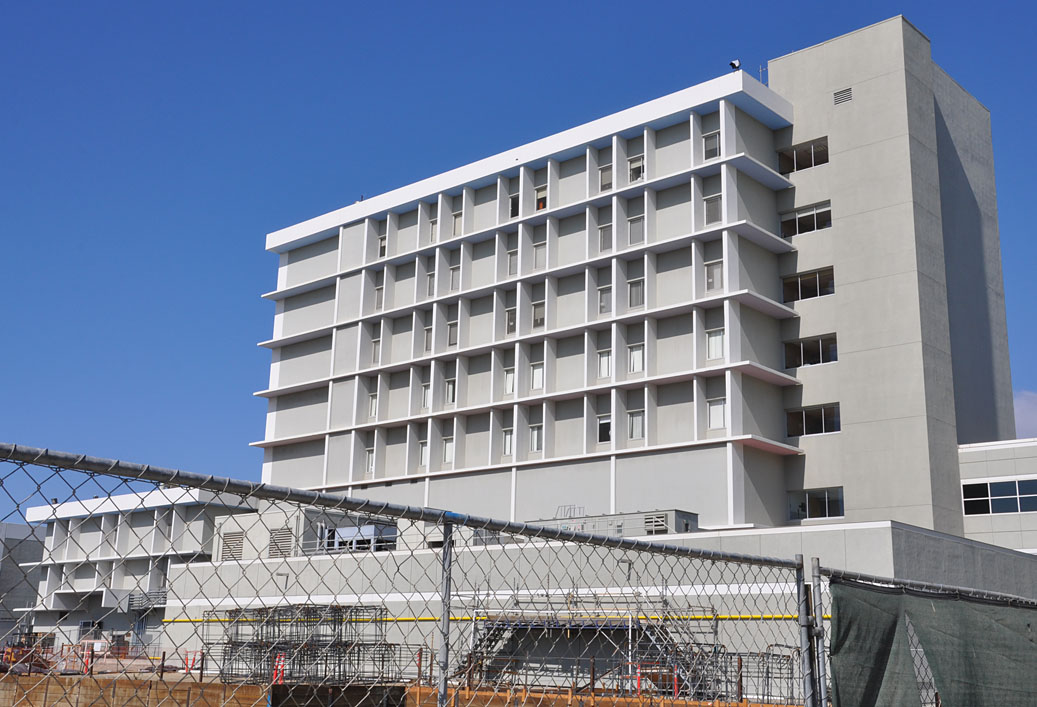 And this building across the street which looks like this one has been updated a bit.  But I believe the swiss cheese holes are original: 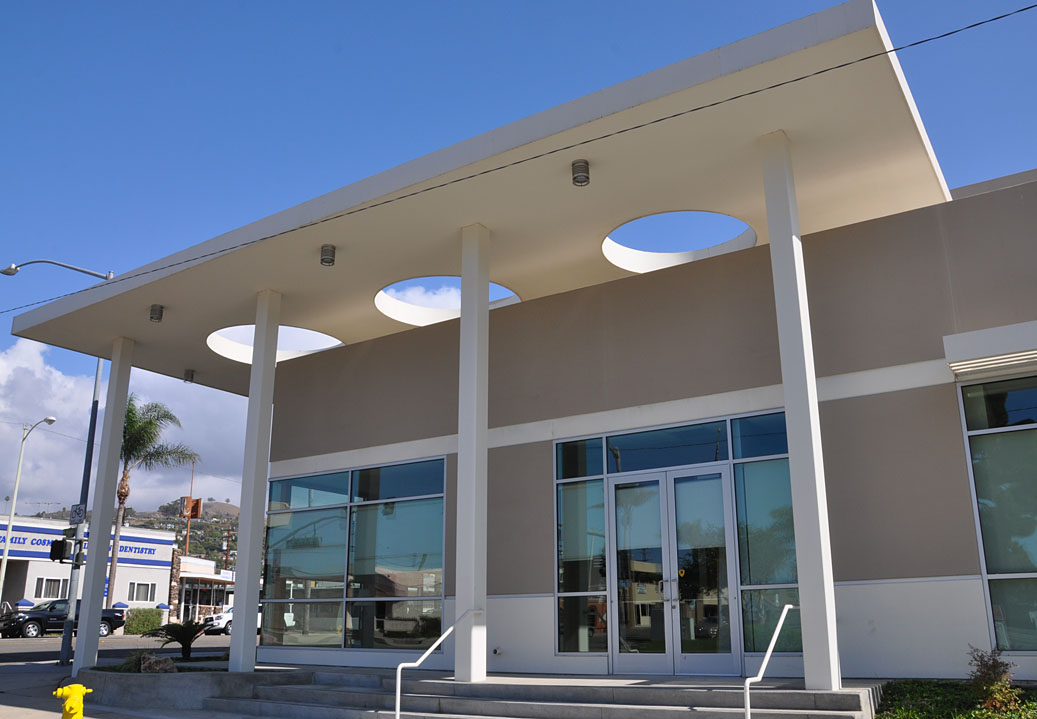 Some more examples of holes and screens: 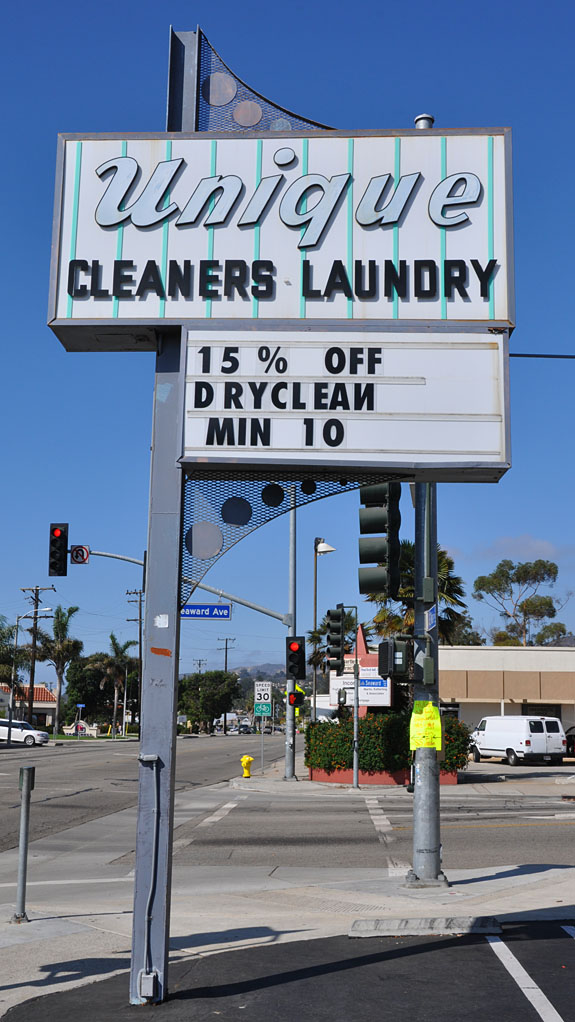 I have no idea — Martian-like fruit and sweet-smelling white flowers:

Most of the neon looks intact — must check on this one at night:

Some species of banana plant.  You can see a banana cluster just above the center if you look closely: 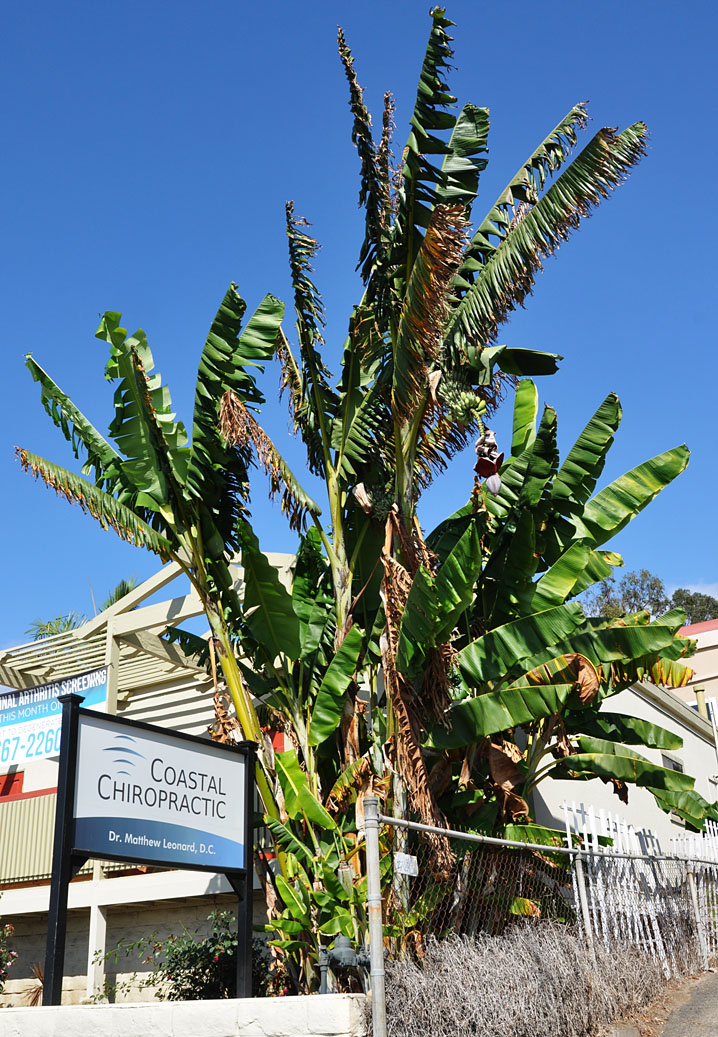 I don’t know what you’d call this style — Prairie Polynesian?

Dolled-up Victorian?  Or maybe never was Victorian to begin with:

A detail from a former garage:

These guys I know from my childhood.  The flowers close up tight at night to stay warm.  Can’t remember the name: 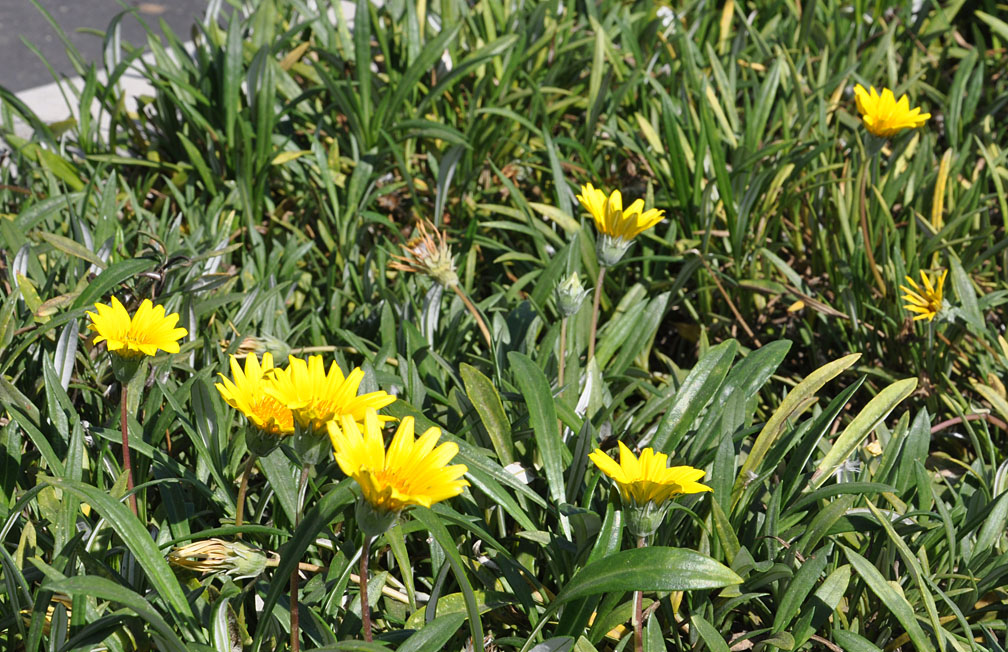 A terrific spot for the dogs — Arroyo Verde Park.  There are trails in the background — but everyone says there are rattlesnakes — so we’ll pass.  That’s Nik running on the right:

And the seniors, Grip & Fix, engaged in more sedate activities — could that be a gopher hole? 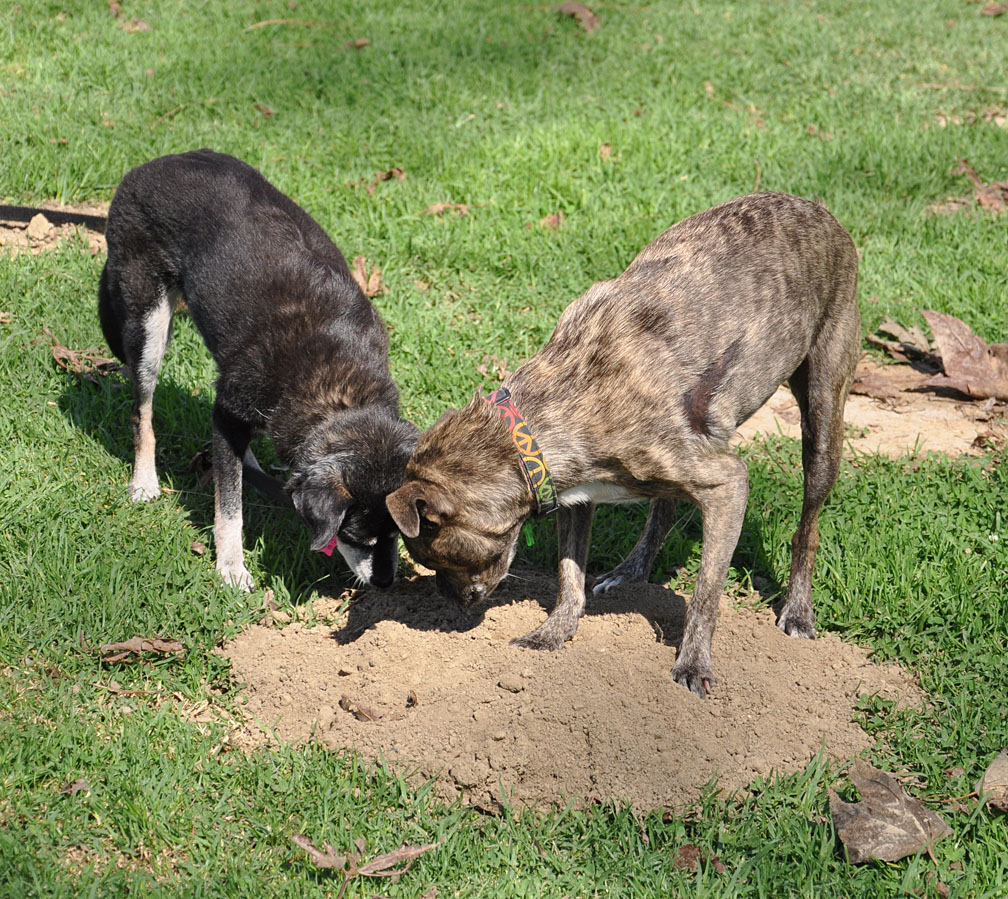 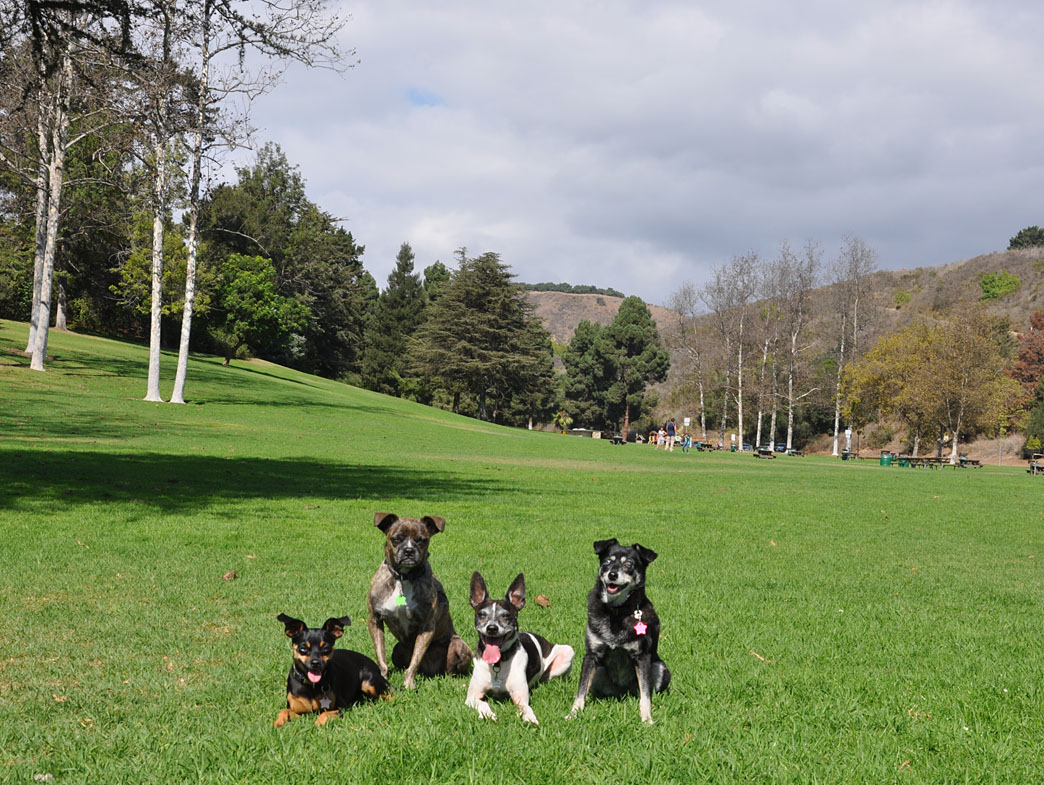 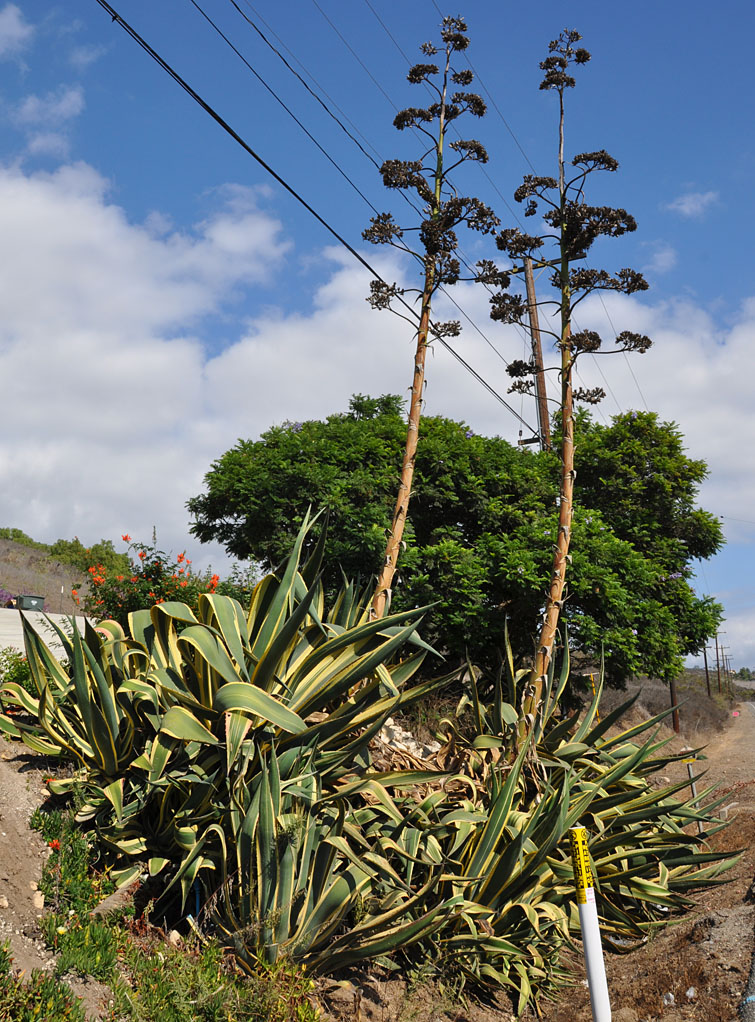 No idea — but incredible:

Downtown — not sure how vintage.  Must have been a name change — those “lounge” letters are so scrunched:

A couple Deco buildings from the Avenue (Ventura Avenue): 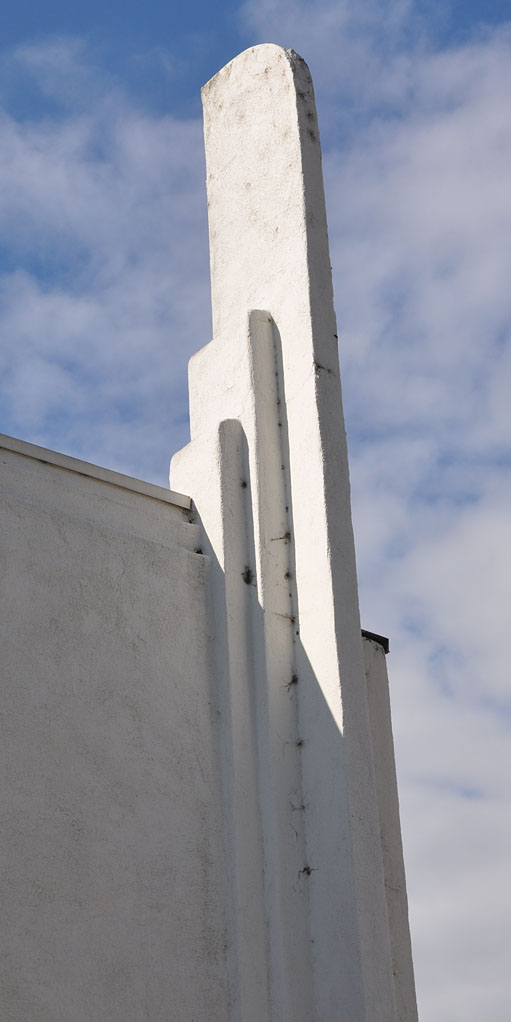 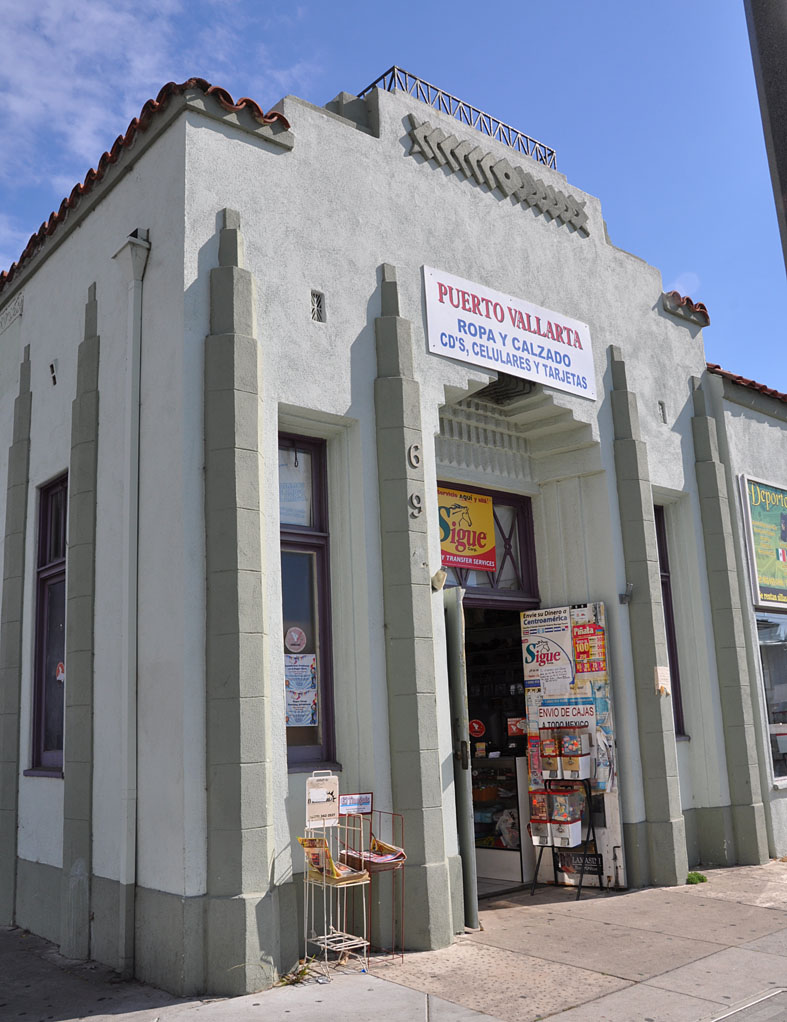 Lots of oil derricks on land and on the sea in Ventura — and yet the gas prices are amazingly high in SoCal:  $4.50-ish right now: 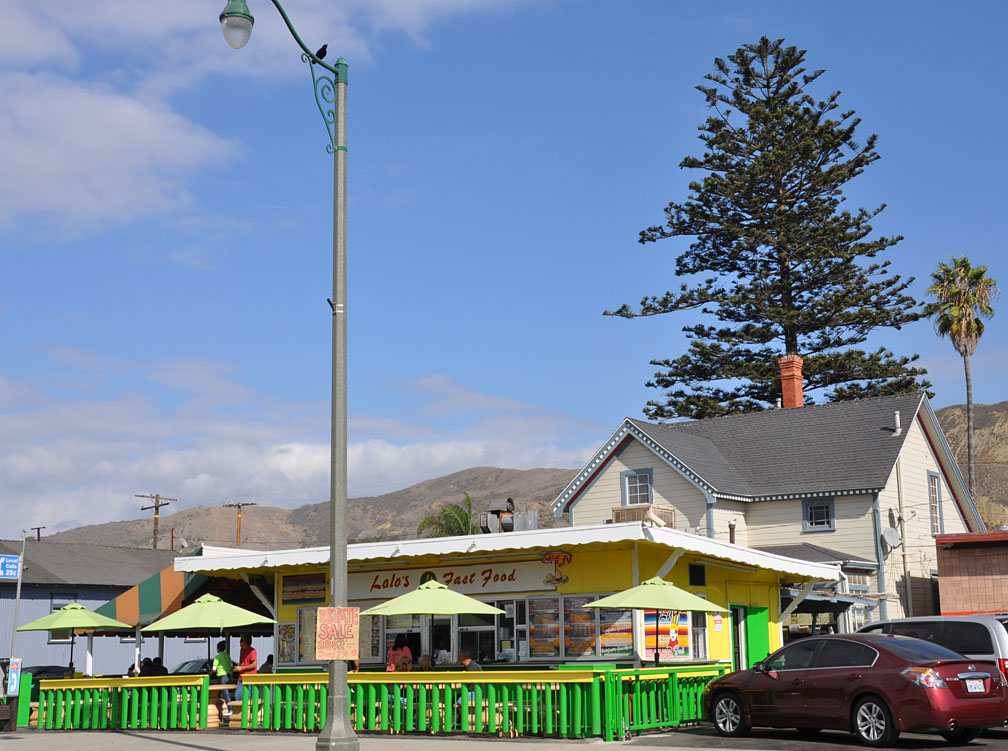 Corn burritos — which I couldn’t even find on the menu.  Fried corn tortillas rolled up & stuffed with refried beans — about 4 or 5 of them under the lettuce, cheeses, tomatos, guac & sour cream.  Super, very HOT sauce.  A meal for under $5 — and A+.

The view of the beach & downtown looking towards Oxnard from The Cross (aka Grant Park): 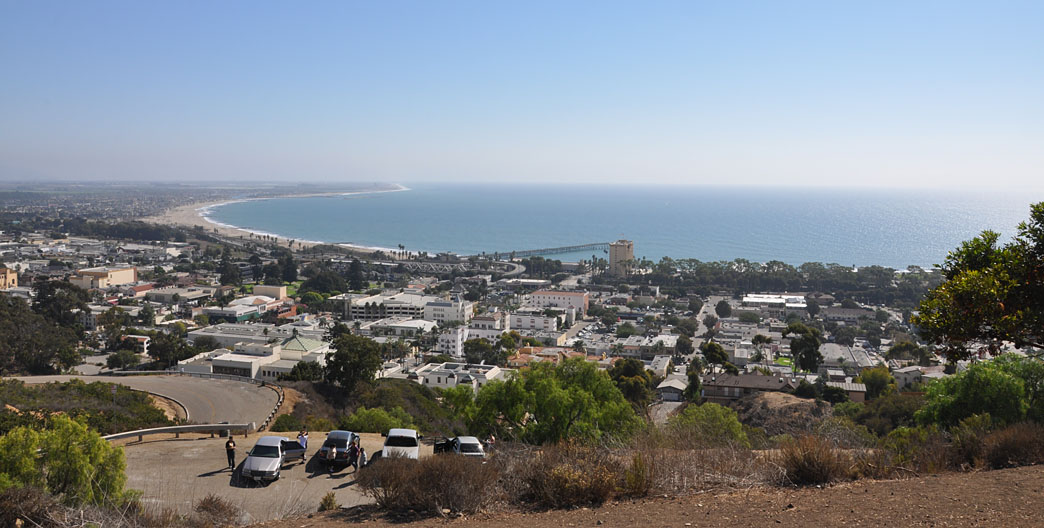 And speaking of beach — more shots of the kids:

Nearly blind Nik using his nose to find his ball in the foam:

Gremlin — enough trouble by herself — cuter than hell, no? 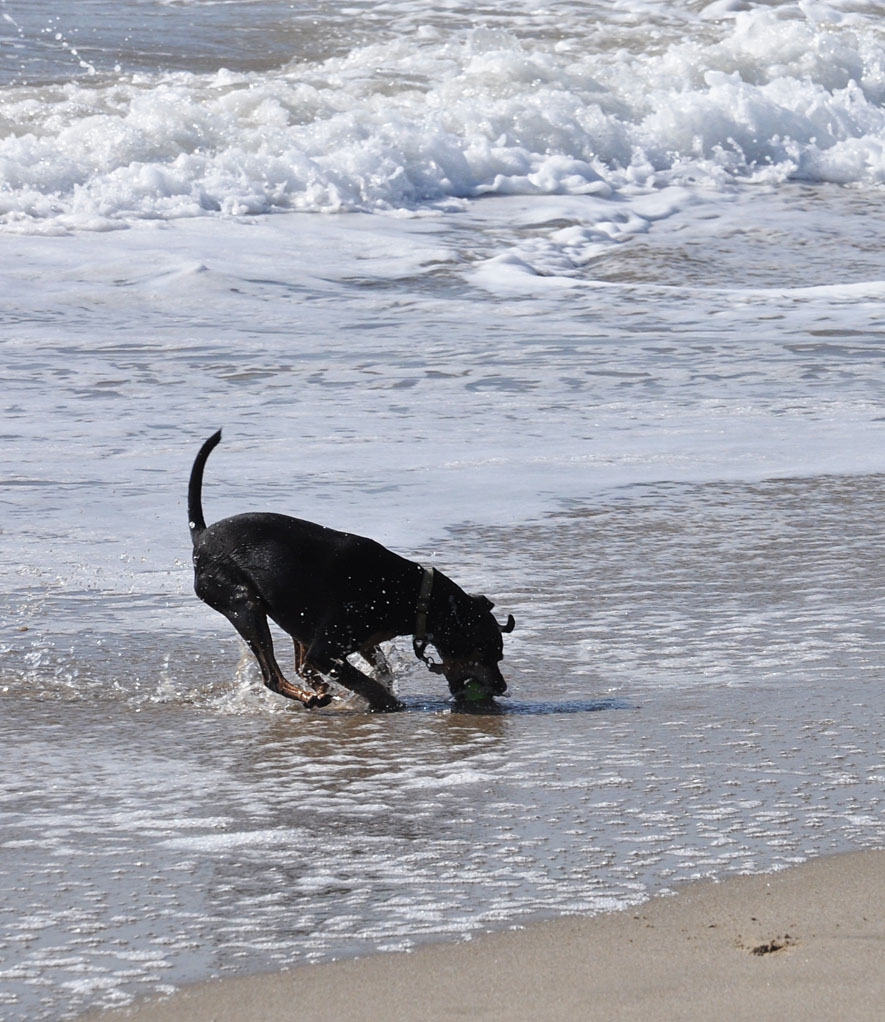 Grip — can’t see a thing but surely knows an ocean when she hears and smells one:

Fixie — sun and sand in her eyes.  She likes the beach.  I think.

I’ve seen more glorious beach sunsets — but here’s what we got tonight:

Wish me luck — the job hunting begins on Wednesday — and it might take a while.  Weeks?  Hopefully, not months.  I’ll keep you posted.  And your good vibes and prayers are welcome!

Don’t forget to check out the other photos from today over at Flickr:
http://www.flickr.com/photos/agilitynut/