A gloriously sunny day — but a good percentage of it sitting in place just barreling down I-90.  Three mediums cups of coffee for me today.  I think a new record.  But I got all the way from western to eastern South Dakota with many stops hugging the interstate on the way.

We started the day in Rapid City.  And one of my goals has always been to replicate the vintage scene here at the Dinosaur Park with my own dogs:

And all my dogs know how to beg, readily, eagerly, easily.  It’s one of the first tricks I teach.  But today, Day 28, I experienced one of those “do we HAVE to, Mom?” moments.  Nobody wanted to do nothing.  I think at least Nik might have — but since he knows a finger signal more than a verbal signal and the nearly blind boy was facing the sun, he hadn’t a clue what he was supposed to do.  Fixie and Grem were on strike.  Grip can only sit up for a couple of seconds since she’s losing a lot of muscle tone in her aging rear end.  Ah well.  I think another trip, another time.

Then, photo-op #2.  I saw this statue in downtown Rapid City last night and knew we had to do it.  But the bronze chair was so slippery from so many human butts previously posed on it, that my guys could barely stay on.  It was like glass.  The statue is of Warren Harding and his Airedale Terrier, Laddie Boy.  There are these smaller than life Presidents on nearly every corner downtown.  I had to shoot quick since it was rush hour traffic just a few feet away and Grem was scoping something.

On with the roadside stuff then.  More Rapid City.  Love this 1970s era sign:

From Hill City.  This guy advertises for Chute Roosters restaurant: 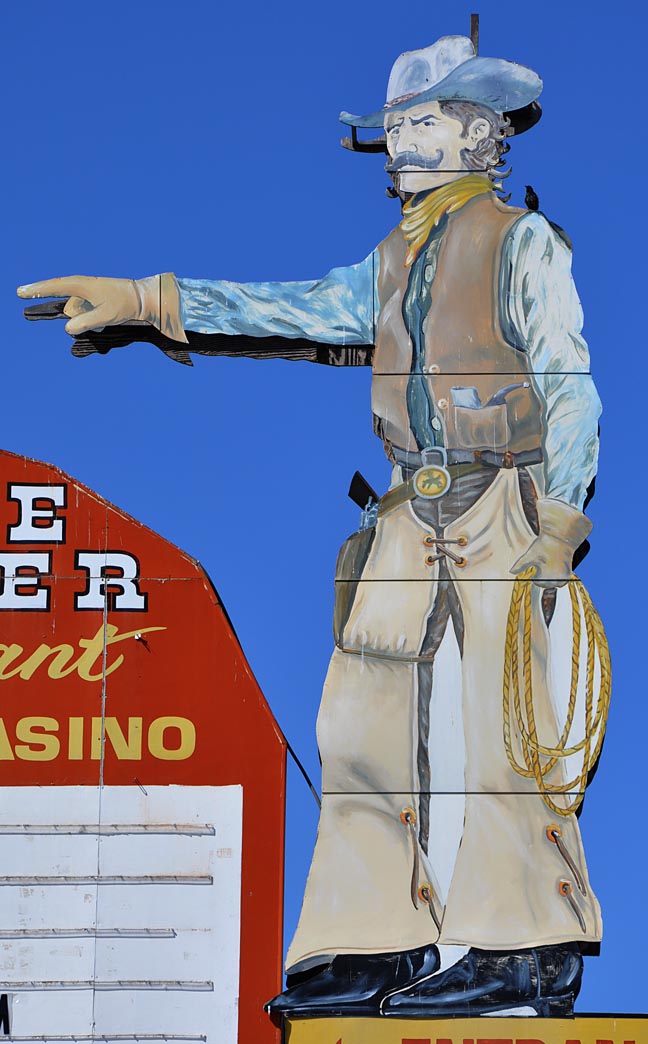 Another from Hill City.  With meshie protective covering: 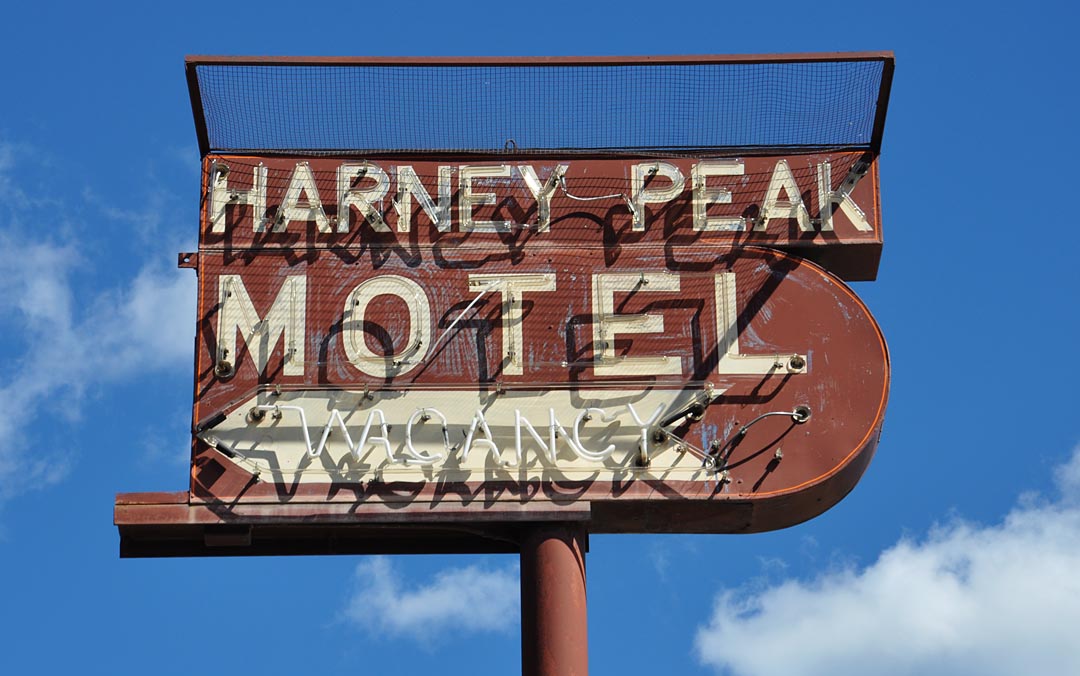 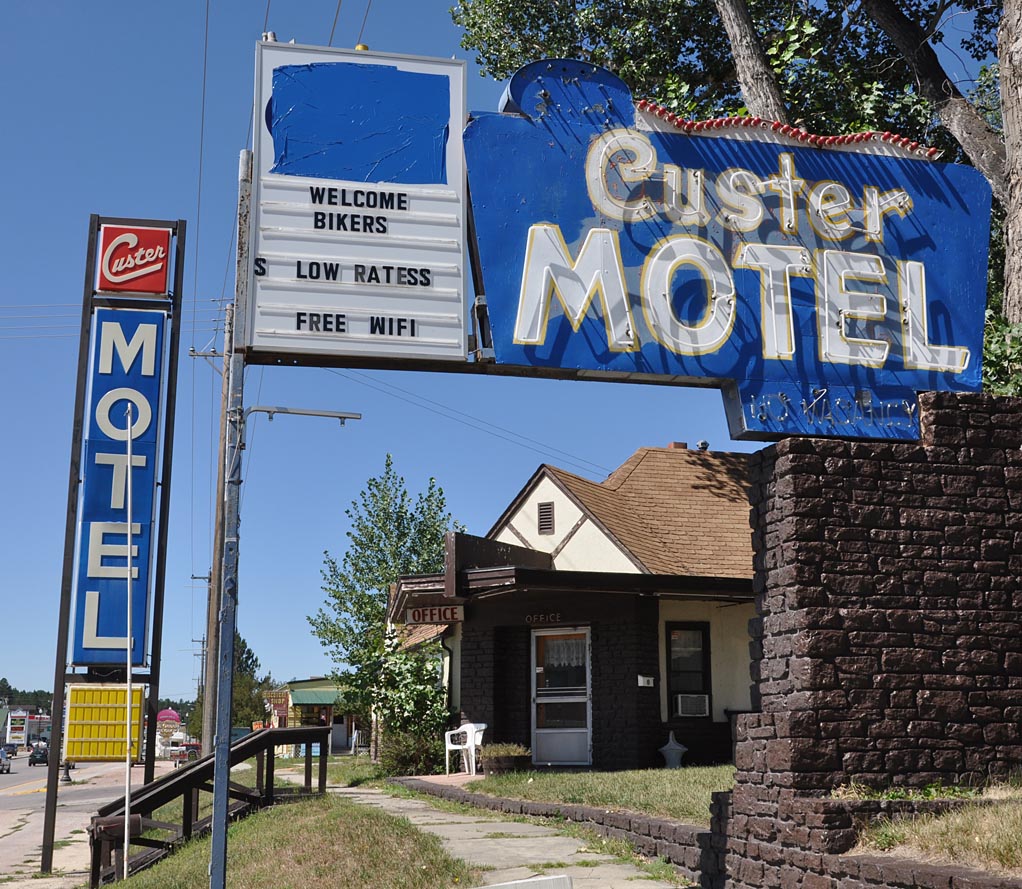 And  no I-90 trip through South Dakota would be complete without a stop at Wall Drug: 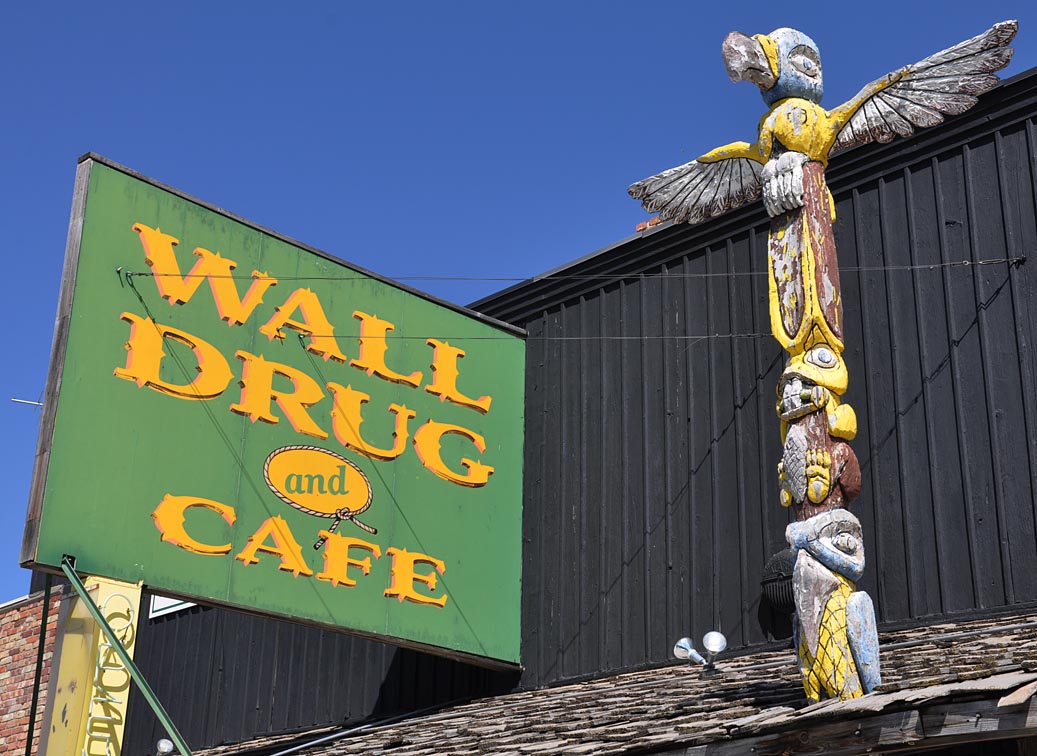 For those of you that have never been, there’s all kinds of creepy statues — animatronic like these — and others just to pose with:

Photo-ops — like this faux Mount Rushmore and a saddled Jackalope for you to climb on.

And of course, an incredible amount of souvenirs, stuff to eat, and all that.  ‘Tis amazing.  This dinosaur is a fairly new addition sure to give the kids nightmares:

On to Interior to check on the giant prairie dog statue — looking good. 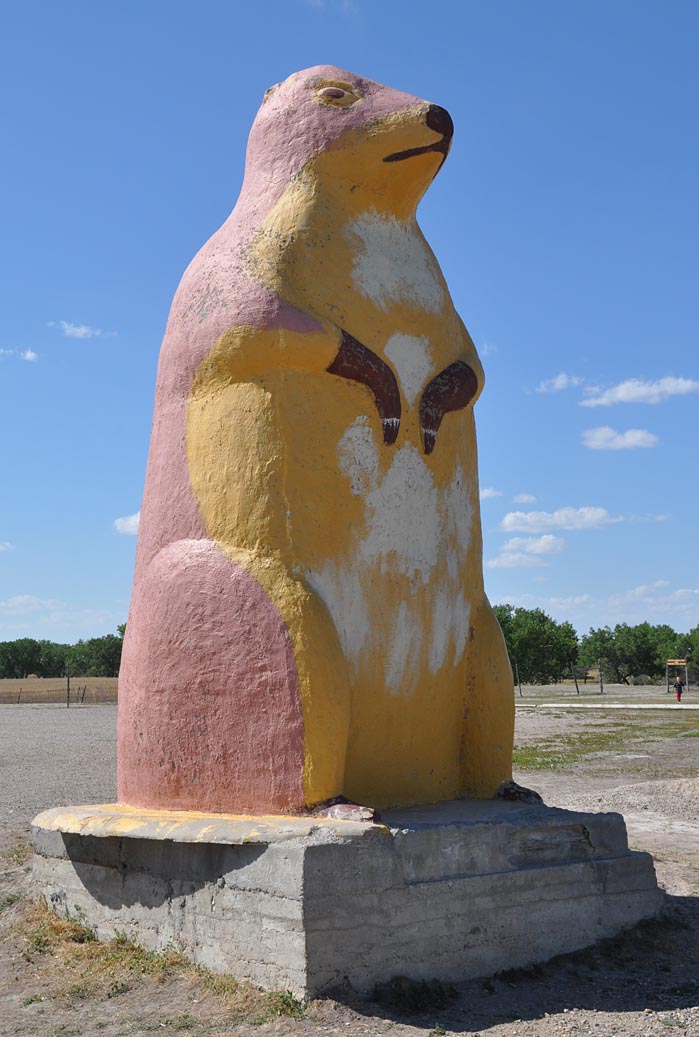 The other times I’ve been there, it’s been deserted.  The gift shop closed.  I had no idea that there were prairie dogs everywhere around the statue.  Maybe they only come out during working hours?  The gift shop sells some kinds of special peanuts or something — you’re not supposed to feed them anything else ($$).  And there were maybe a dozen kids and families there with the critters eating right out of their hands.  The fattest little prairie dogs I’ve ever seen:

And of course, the dogs were enjoying the show…  That’s Grem barking madly in the front seat and Nik jumping up and down.  Grip gets in a participatory bark now and then.  Fix is pretty much wishing we were back in Brooklyn already.

A couple of signs from Murdo: 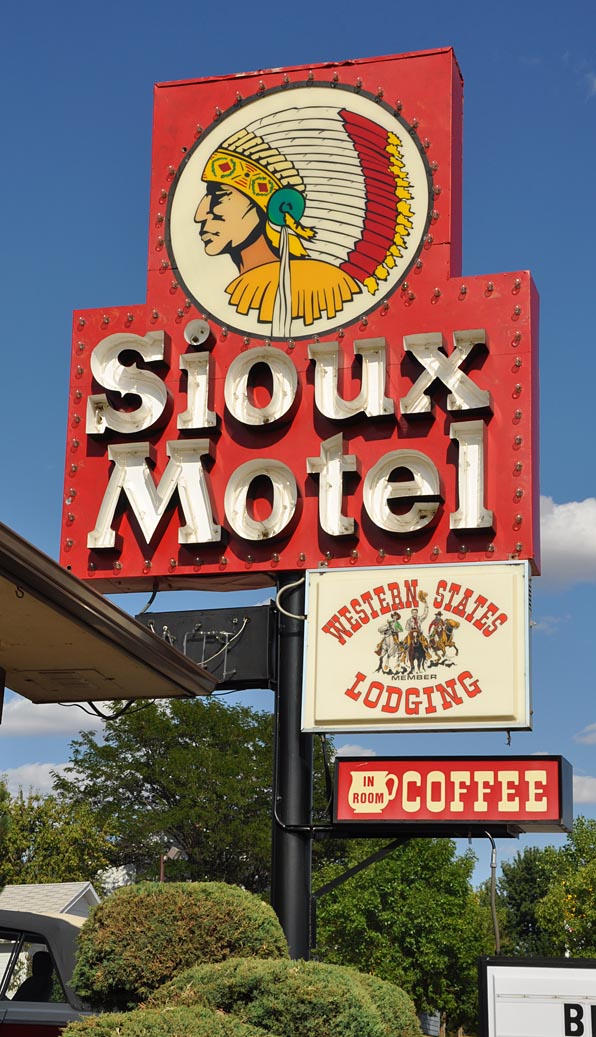 On to Sioux Falls.  I arrived at dark and was totally unprepared for shooting neon — but knew I had to find the energy somewhere.  It means even less sleep but who knows when I’ll be here again.

Just enough light to make out that one lonely car.  I put the pole sign from this place over at Flickr tonight.

I should be able to finish up South Dakota and get started on Minnesota tomorrow.  I thought I was maybe a day and a half ahead of schedule.  Thinking how nice it would be to get back on Saturday morning and have all weekend to get my life together before work on Monday.  But looking at the thickness of these Minnesota and Wisconsin packs — wow, not so sure.  I have a feeling it’s gonna be another killer drive home from Chicago & I’ll be home late on Sunday.