I wish I had good news about the little black doggie.  I started looking for him at 6 am.  Walking back and forth through his territory until 9 am.   No sight of him.  Nobody else had seen him either. Maybe he’s a late sleeper or maybe he moved on to another part of town.  I had to get on down the highway and leave it to the locals.

It doesn’t seem like anybody else cares much about this little guy.  I called the vet in town and they said “There’s nothing we can do.  We can’t get involved.”  Bunch of crap.  I told them maybe they could at least mention it to their clients that were into rescue.  I called the police again to make sure they had my information.  I sent an email off to a contact person in Wyoming for IMPS (MinPin rescue group).  Haven’t heard back.  And today, a cold front had moved in — temps about 20 degrees colder. Reminding me that winter is coming and this guy doesn’t stand a chance if he’s not rescued in a couple of months.  Much  crying during today’s interstate driving.   I’m absolutely devastated.

Trying to put it out of my mind — but can’t.  Back at it though.  Some things from Casper.  This gas station is gone but the sign remains:

The Goodstein Building from 1960 has a lot going on.  Including the plastic bubbles over the entry on the right.

This building is just across the street:

This place was originally a Tastee-Freez.  There is still a T-F menu board there on the far right.  I have never seen a T-F sign like this before — but the company did use diamond shapes in the 1960s:
http://www.agilitynut.com/eateries/tastee4.html 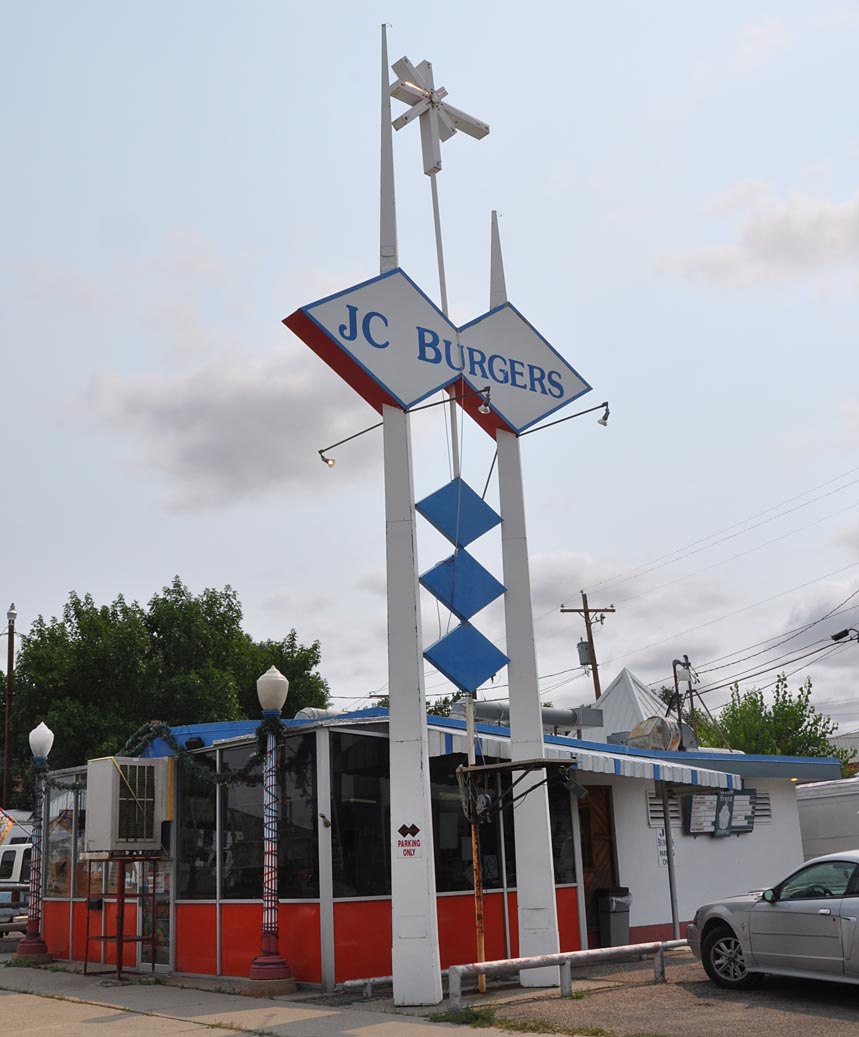 Also in Casper:  Sanford’s Grub & Pub.  This place opened a few years ago.  There are a bunch of dinosaurs and oddball fiberglass statues in front including a couple of forty footers of Daffy Duck & Bugs Bunny.  There’s something on-line about Daffy & Bugs coming from Coney Island — but I would think I’d know about that since I live in Brooklyn. 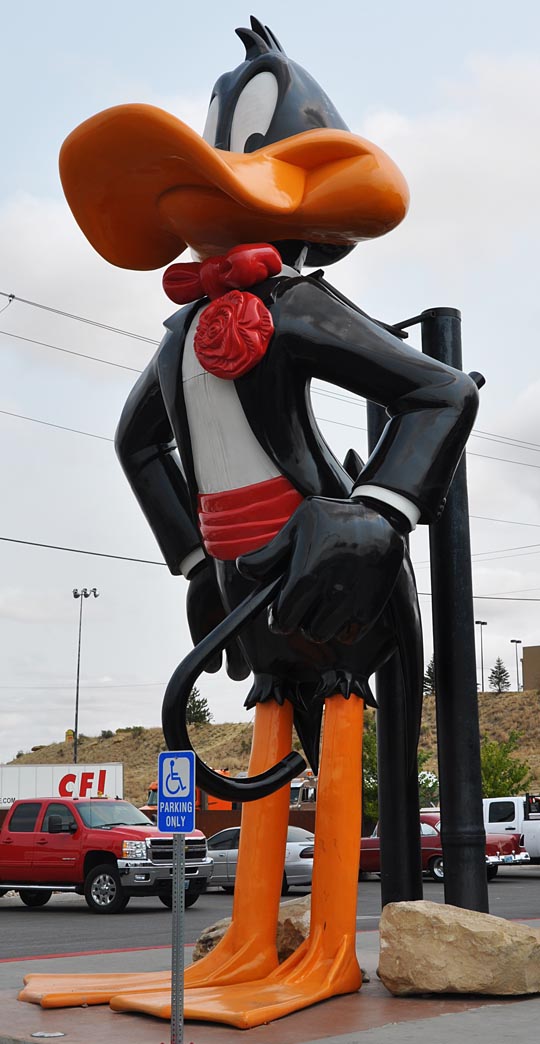 Inside, there are a bunch of signs.  Many of them repros.  And you have to steel yourself since there is much modern Betty Boop, Marilyn Monroe type crap there as well.  Terry’s Turf Club this place ain’t (loyal bloggers may remember all the vintage signs from Cincinnati).  But I believe these signs have enough dings to put them in the “real” category: 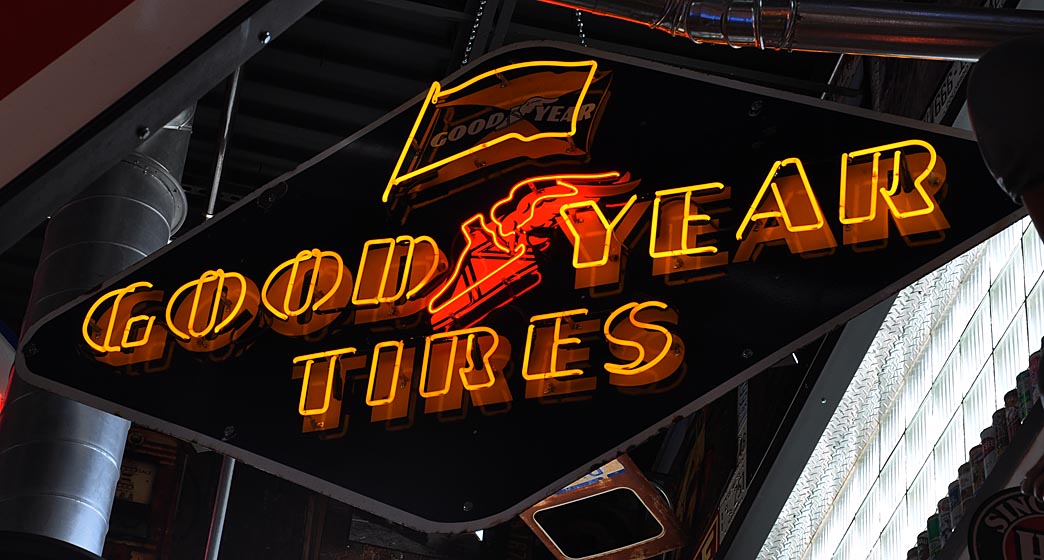 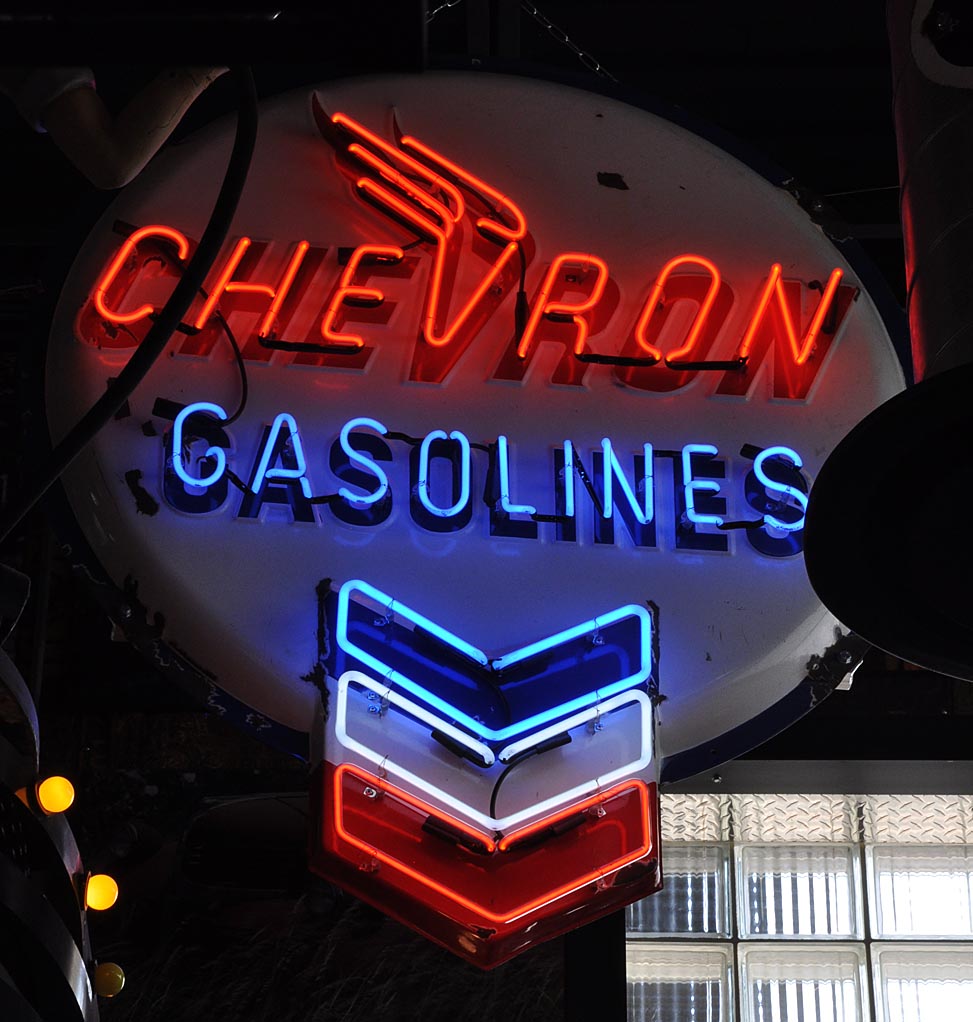 This one’s a modern sign but interesting since it uses the old Ford design:
http://www.flickr.com/photos/agilitynut/7648198266/

From Wheatland.  Obviously repainted, most likely renamed.  But I love that gumball-filled arrow. And anything covered wagon gets my attention:

Also from Wheatland.  Love this super funky liquor store — the way those orange letters slant on the 1970s? shingles.  The curvy arrow sign and the mammoth brown sign.  What a freaky letter “A” that is.

From a rock shop in Torrington.  A spinner sign!!  Love the visible pulleys & belts.  Not super fast — but still fun and oh so rare now.  Here’s a little video I made to show you the speed:
http://www.youtube.com/watch?v=Z58ISL8_5UM&feature=youtu.be

There are also other videos I’ve shot of signs at this YouTube account that you might want to look at when you have the time:
http://www.youtube.com/user/agilitynut

A couple from Newcastle to close out this post.  Obviously, neon on the sign originally.  Maybe also a different name.  Love the bisecting giant arrow.  I’ve seen bisectors before — but never this big:

This place is still open — though this skewed sign in a big field might make you think otherwise.  There’s actually a fountain there that looks like this, too.  Aren’t the fonts great — and the water ripples?

We should be able to wrap up Wyoming today and move on to South Dakota.  About a day and a half ahead of schedule.  Got through so much of Colorado and Wyoming on this trip.  But with 10 days of shooting to go — it’s not over folks!  Now comes the “sample pack”.  About two days in each of these states:  South Dakota, Minnesota, Wisconsin, and Illinois.  And then the highway home from Chicago.