Yep — we’re on a roll here with the sun and everything is running smoothly.   I knocked out Colorado Springs, Manitou Springs, some small cities in the mountains.  We’re now parked for the night in Salida.  Ready for even smaller cities tomorrow in south and southwest Colorado.  Probably not such high volume shooting since those twisty roads take forever getting anywhere.  Lots of coffee will be needed.  So, tonight I’ll give you a nice substantial batch.

The dogs are hanging in.  Grem is still barking her head off at motorcycles and there are a LOT of them in Colorado.  But everybody else is pretty much konked out.  Fixie seems particularly tired and lags behind on our outings “oh no, a-NOTHER hike?”   The water is pretty cold so it doesn’t take much to cool them off.  Grippie has mastered the art of sleeping while sitting.  I don’t know why she doesn’t lay down — she can lean like this for hours:

Let’s get to it.  A whole bunch of signs for you from Colorado Springs: 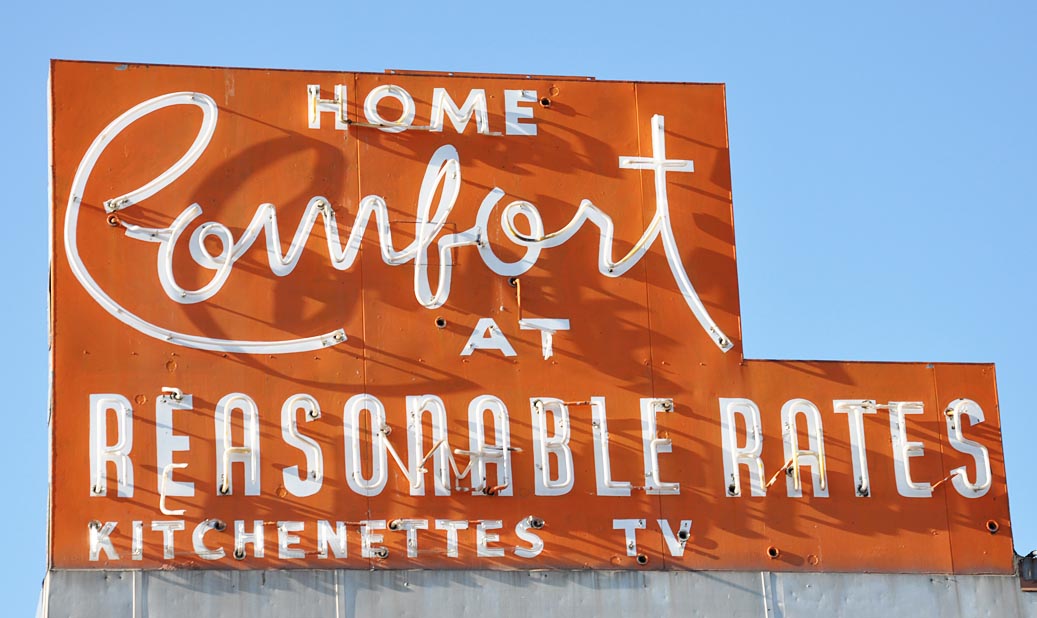 I don’t recall seeing this one before and suspect that it’s new:

This sign at a former Tastee-Freez appears to be homemade — but apparently there are others out there like this one:
http://www.flickr.com/photos/railbalancing/2823072056/

It looked like this place was vacant & for sale:

Supposedly, this was also a former Tastee-Freez — but I’m really not sure.

And today — the lot adapted for Dun Rovin’ Plaza — conveniently the same amount of letters in “Plaza” as “Motel”.  The Dun Rovin’ part no longer makes sense.  But I’m thrilled that they saved the sign.  Unfortunately, the building with those legs was demolished.  The plaza consists of a used car lot and Western clothing store.

Some bad news from Manitou Springs… The wonderful Navajo Gifts sign was covered up this summer.  Here’s what it used to look like:
http://www.flickr.com/photos/vintageroadtrip/7688361656/

It’s not clear if the Indian panels are still there underneath.  It looks like they might be — the shape of the “can” is the same.

I nearly forgot to include this one from Colorado Springs.   Not quite sign, not quite statue.  This cutie is from Neptune’s Lakeside Cafe:

And last one for the night from Salida.  Freestanding neon shapes & letters thrill me.  They are little miracles of design & survival:

Come on back tomorrow for goodies from lots of itty-bitty places in Colorado.  And don’t forget to tune in now and then for the other photos at my Flickr stream:
http://www.flickr.com/photos/agilitynut/

I post those photos before I start working on the blog — so you’ll know that I’m alive and hard at work.  Then the blog post goes up a couple of hours later — unless I just can’t possibly keep my eyes open and have to finish up in the morning.  So far, I don’t think I’ve had to do that on this trip.

I only have one planned night off  planned.  Actually, it might be an entire day off.  I’m going to go visit a doggie friend in Moab, UT.   That’s coming up in a few days — as soon as I work my way up to Grand Junction.  I’ll let you know so you won’t think I’ve fallen off a cliff.