Lots of highway driving today (actually yesterday since I’m still a day behind).  Which felt good after the crazy city driving — traffic and lights, crazy parking on sidewalks, etc.   The heat continues.  In the mid-afternoon, I turned on the A/C and all was well.  But then — I noticed on the highway that at about 55 mph, the A/C all but stops working.  So I called up the Firestone in Albuquerque where it was worked about a week ago.  And I stopped at a Firestone in Yuma.  One said it was most likely a blower motor — the other said it was probably a vacuum canister.   Either way, a big project.  But since the temps have dropped from 105 to a mere 95 — and I’m back to driving in stop and go traffic (small towns and Tucson), the A/C is working well.  I’ll just take this A/C thing a day at a time and see if I can limp home & get it repaired there.  I just dread the thought of sitting and losing a day’s worth of shooting.  Folks took cross-country roadtrips without A/C — so I should just suck it up and keep driving.  But if I see my companions tongues out for an extended period of time, I’ll have to stop and deal.

Let’s get to the photos because I’m falling asleep as I’m typing and I haven’t even started working on today’s photos.  These two are from Wickenburg:

Up into the mountains to Prescott.  I got pulled over for speeding on the only 50 foot straightaway there in the middle of nowhere.  Complete speed trap.  But got off with only a warning.  No tickets yet!  I hate this mountain driving thing — takes for-ev-er and I worry about getting stranded.  But sometimes, it’s the only possible route.

This one is from Prescott.  I’m stumped as to the when/what of this one.  The shape and height are very 1920s.  But then there’s that modern plastic.  And I love that hole that functions as the period — very mid-century.  And the who-knows-when of the tacked on message board.  The whole thing could’ve been done in the 1960s I suppose — they must have had “retro” signs then.

Also Prescott.  This one appears to be new — or a complete replica of an older sign.  I’ve been seeing a lot of these A-1 beer signs — which is evidently an Arizona brand:
http://www.azcentral.com/travel/articles/2010/07/02/20100702arizona-A-1-beer-back-july.html

Still Prescott.  This shape looked familiar to me.   I went inside to inquire — and yes, the place was originally a laundromat — the sign was adapted.  Checking my photos and others at Flickr though — the shape is not quite right.  This sign has a much shorter bottom and no top — but maybe Launderama had other signs I haven’t seen or there was another company with a similar design:
http://www.agilitynut.com/09/8/launder.jpg

One more from Prescott.  It appears to be an updated and cleaned up vintage sign:

From Aguila — the Coyote Flats Cafe.  Maybe not the original name:

And on to Yuma:

A vacant department store downtown with some neat details.  I couldn’t find a name — or a pedestrian anywhere to ask what this place was:

A former Denny’s sign sleeve.  There must have been thousands of these things — now super rare:

From Gila Bend.  The lower part of the sign must have been tacked on later — and an interesting solution to wrap-around that balcony: 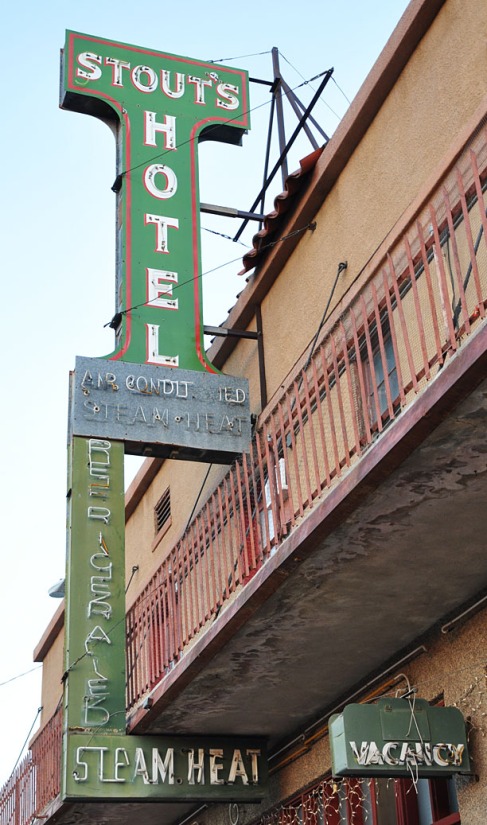 And on to Casa Grande for the night: 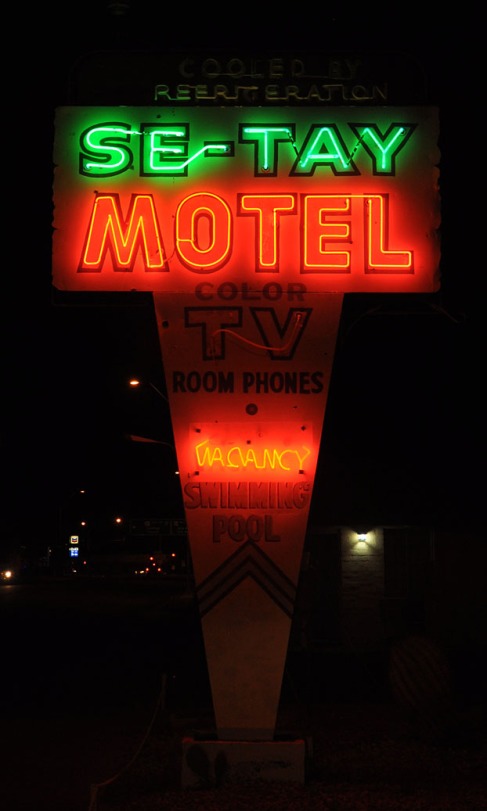