Things are getting out of hand here.  I’m two posts behind so let me at least finish up the post I started on Monday.  The good news — yes, the sunshine (and heat) continues.  I had a productive day in Phoenix yesterday and am ready to move on.  I think I might be a day or two ahead of schedule.  Never had that happen before.  I also got to meet an online pal, finally, in person last night (more on that later).  One drink though and I’m paying the price this morning — brain cobwebs and headache.  So I won’t be texty right now since my sentence construction is weak.  Let’s roll with the photos.

My Phoenix area stuff started in Cave Creek.  Big Earl’s Greasy Eats is housed in a former 1930s gas station.  It opened here in 1993,  But I must have missed it the other two times I was here.  This sign appears to be completely new (including the metal) — done in the style-of a vintage sign: 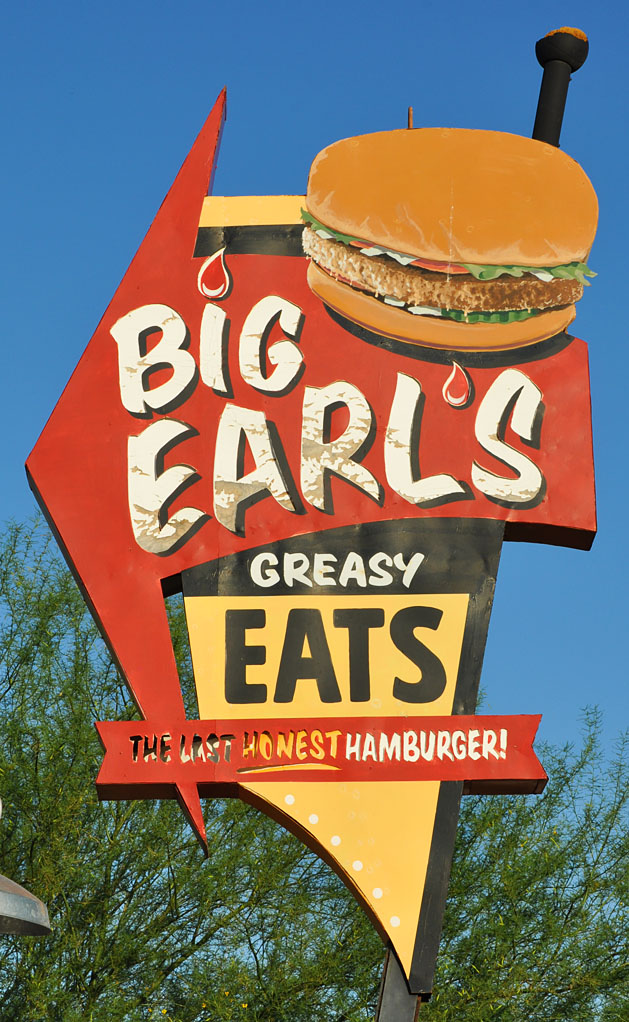 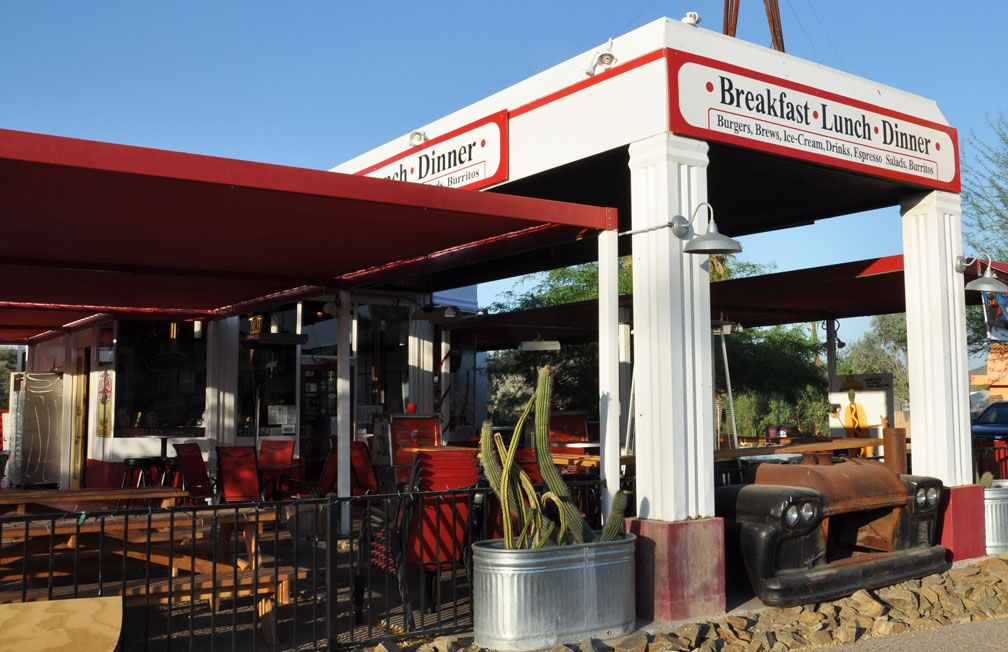 Another retro (modern in imitation of old) sign in town: 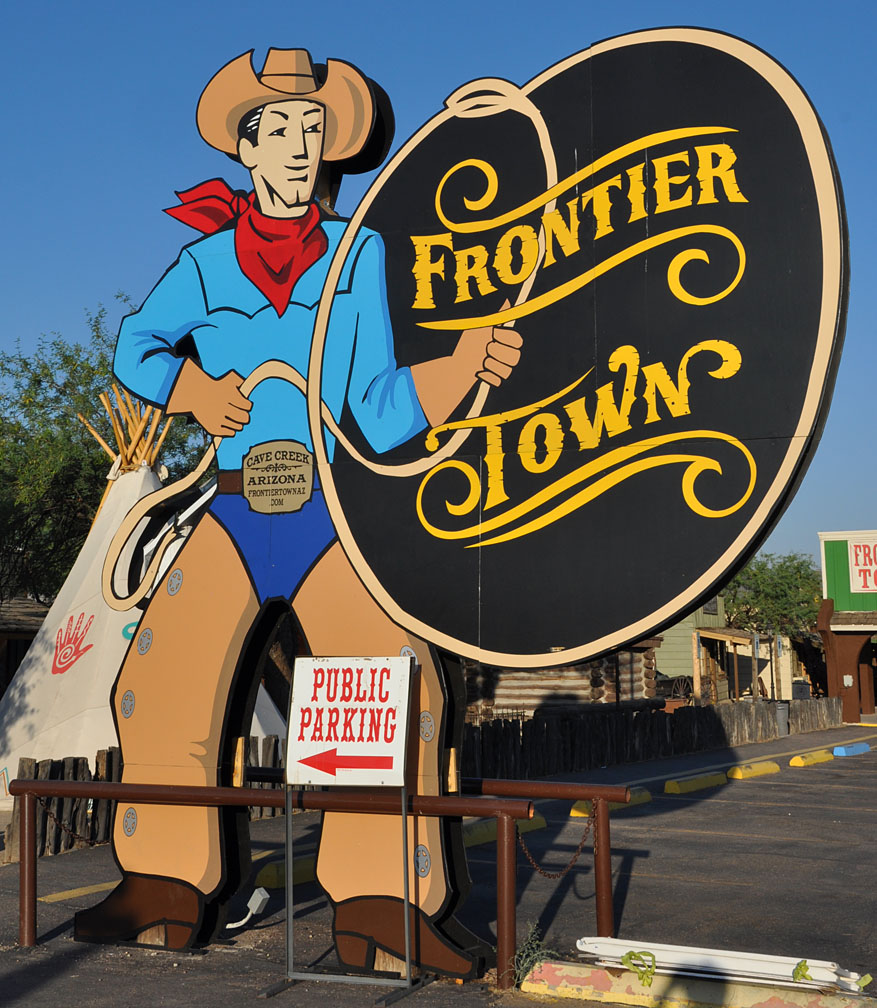 Phoenix seems a bit like Mars to me, botanically speaking.  Meaning that seeing all these different types of cactus and shrubbery is shocking and intriguing.  I don’t think I’ve ever noticed purple cactus before — prickly pear? 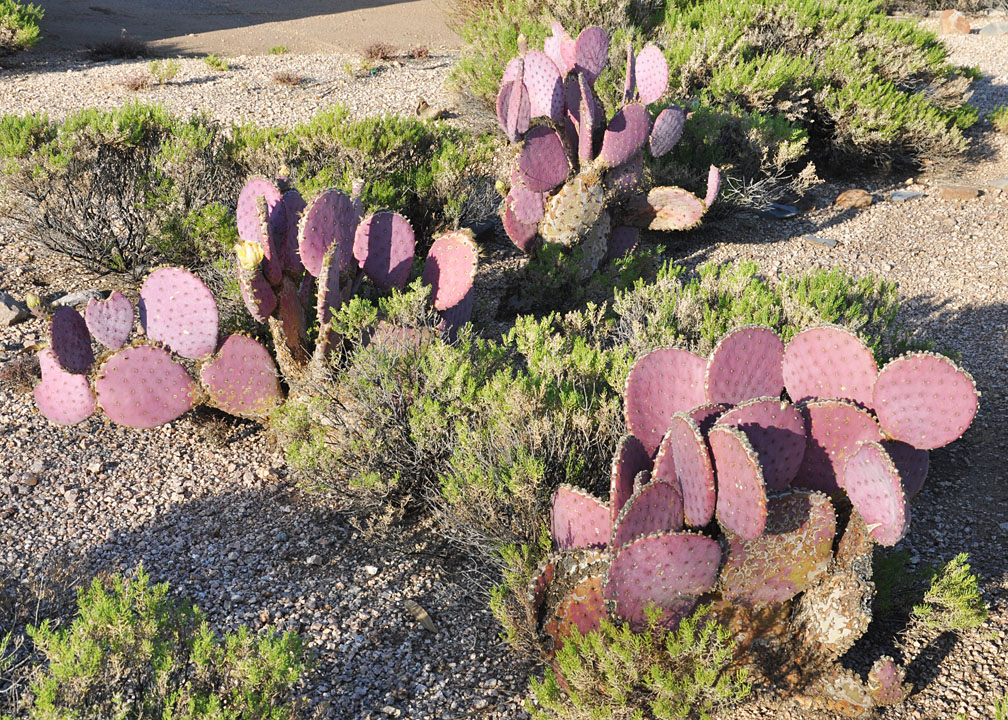 And these saguaros all seem to be in bloom with little flowers on top.  I don’t remember seeing that either.  I think I’m usually here earlier in the year:

Another blooming cactus — really neat!  This is just a little guy — maybe a foot tall: 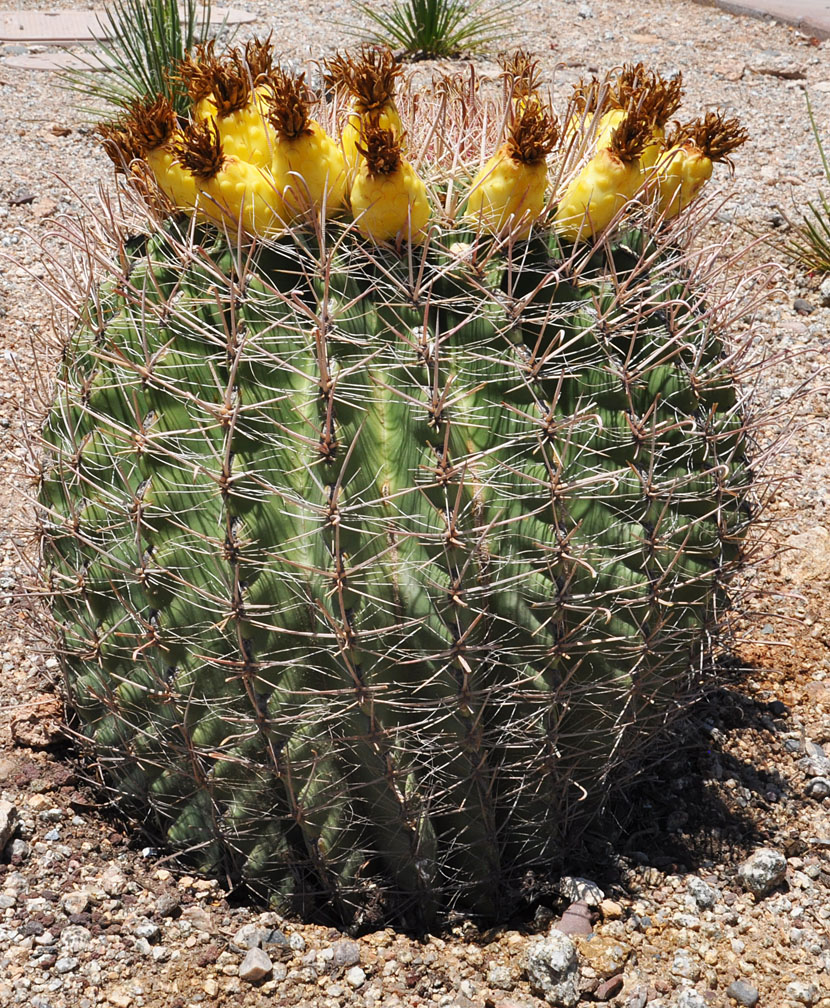 And, of course, palm trees everywhere.  They don’t seem to be in northern AZ and I saw very few at all anywhere in NM.  These guys are at the mid-century modern Scottsdale Palms apartments (in Scottsdale): 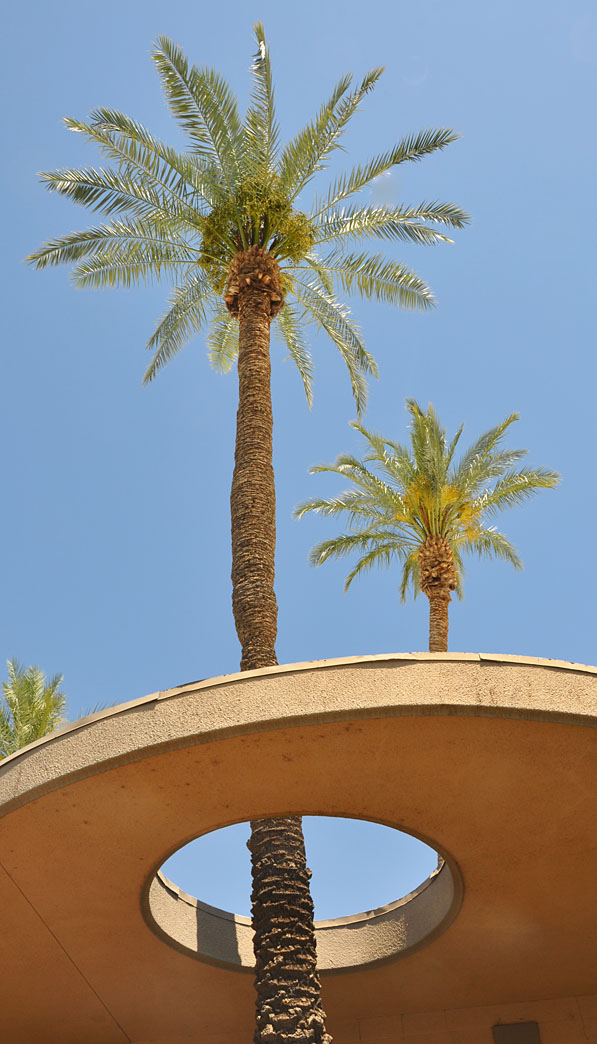 I have been to a few malls in the Phoenix area (carousels, signs that weren’t there anymore) and witnessed the “walkers” phenomenon.  I guess this goes on all over the country but I hadn’t seen it before (not often in malls).  With the heat in Phoenix, mobs of middle-aged folks (hey, I’m one of them so I can call them that!) walking laps to get exercise.  Usually with partners, yakking it up while doing their power laps.  I guess mall management doesn’t mind — extra free security, sets of eyes, and maybe they get a smoothie or something after their laps.

Anyhow, I noticed a couple other things while at the Paradise Valley Mall — this touch screen Coke machine like a giant iPad — also with video playing that my camera didn’t capture well: 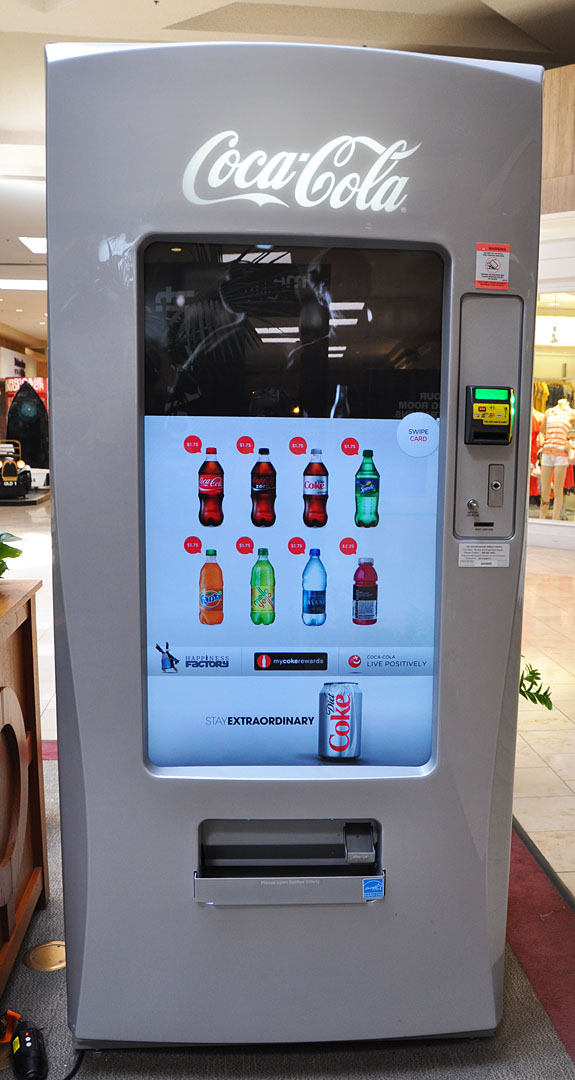 Also, this Hurricane Simulator — I didn’t try it out and half-regret it:

Loads of mid-century modern in Phoenix — and lots of buildings with these louvered screens.  I don’t know how many are operable or never used that way.  Think Venetian blinds where you can change the angle of the slats to let in more or less light.  No need for this really in New York — but with the scorching temps just the past few days, I get why the concept was a hit here.  This one at a Chase Bank: 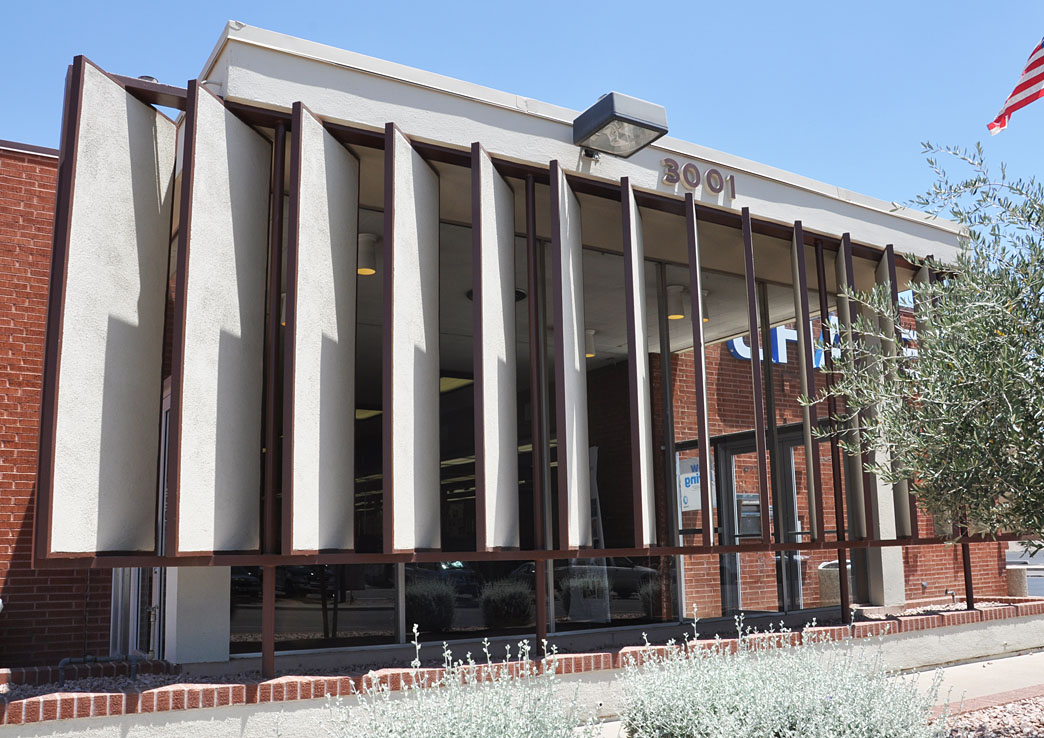 A couple of well-cared-for signs: 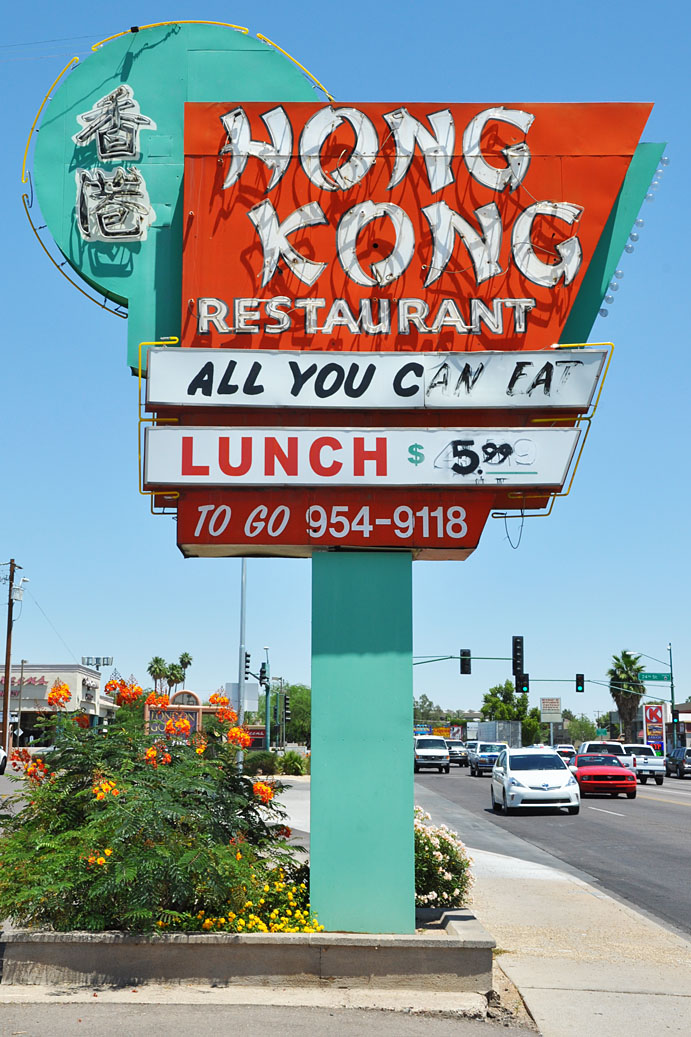 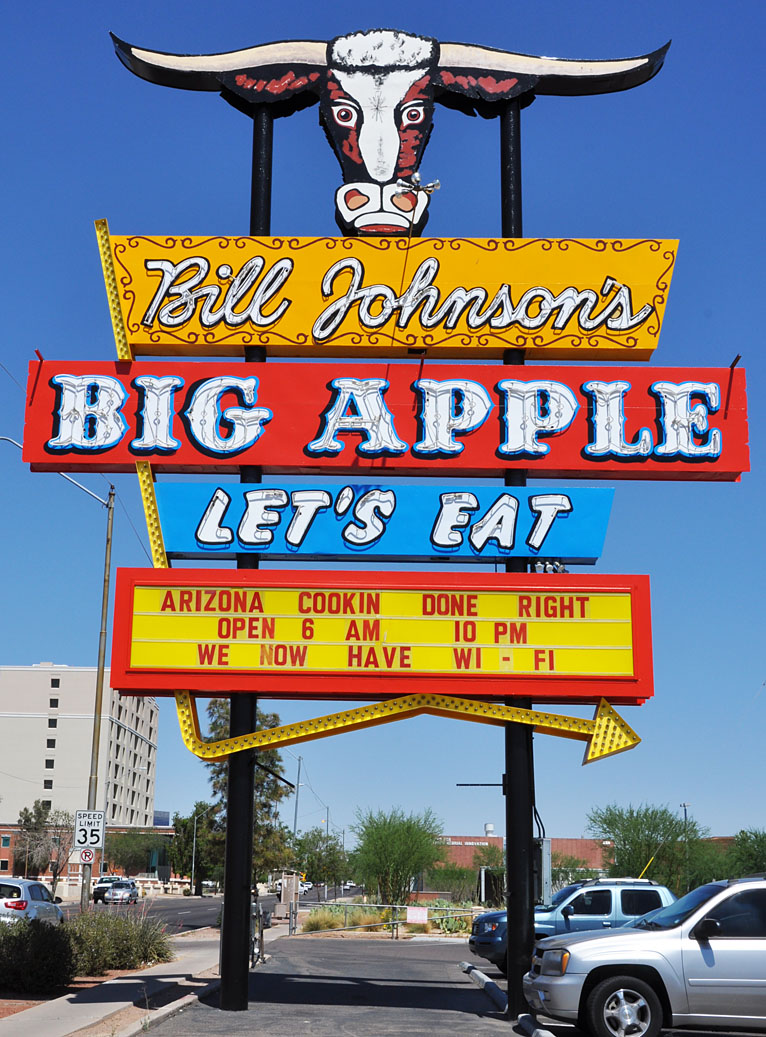 I don’t know if this sign had neon originally.  It’s still in business: 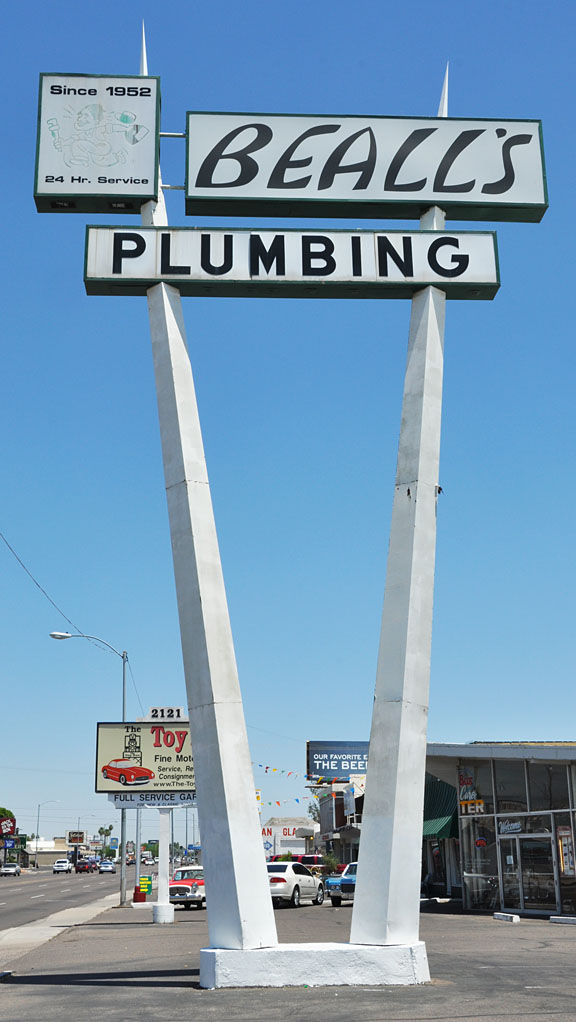 This giant rooftop sign was built in 1947.  The flower shop closed in 1996.  A few years later, it reopened as the “My Florist Cafe” which kept the sign.  The cafe closed in 2010 but the sign is still there.  It sounds like it might be protected:
http://vanishingphx.downtowndevil.com/the-changing-face-of-my-florist/ 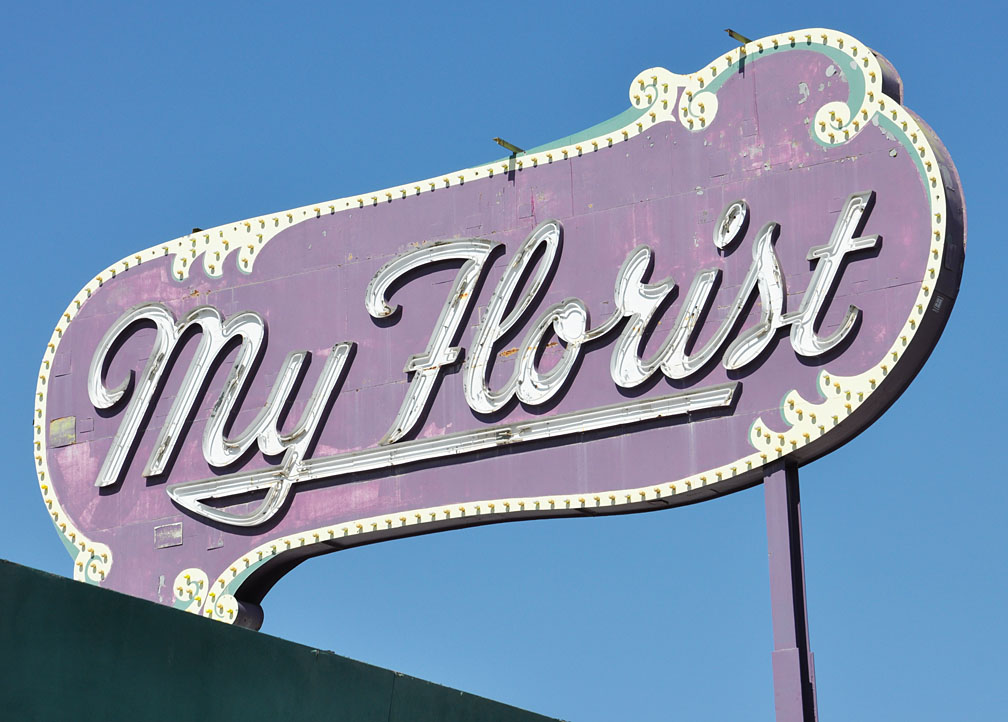 MacAlpine’s Soda Fountain was established in 1928.  Apparently, still the original cabinetry and booths and other fun vintage stuff on display: 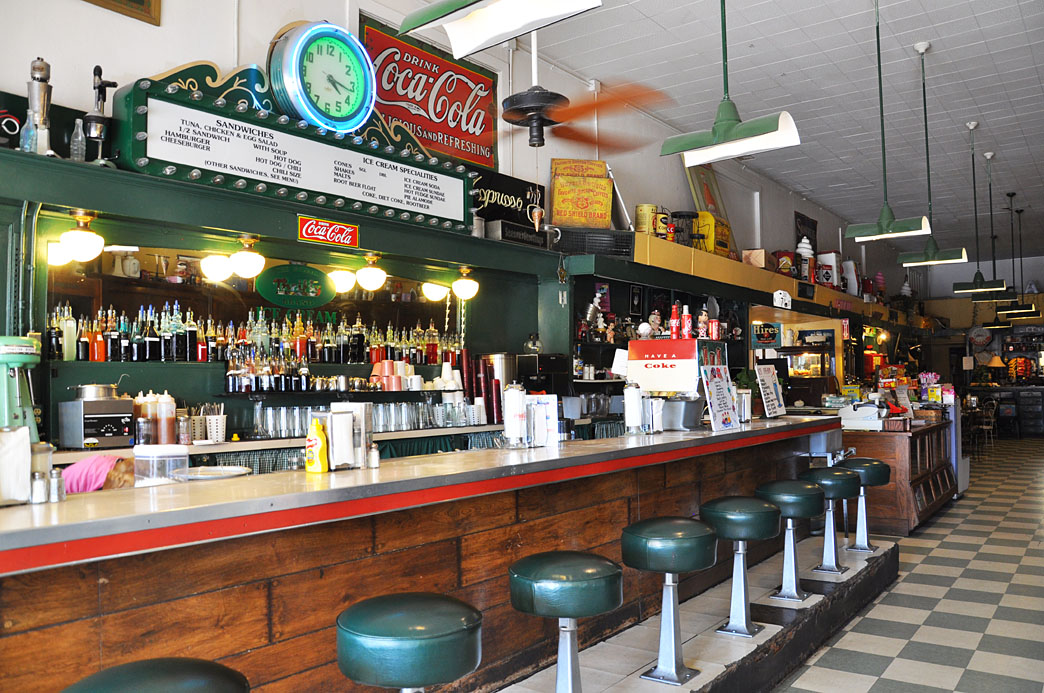 When I’ve been by before to shoot the Rexall signs outside, the place was closed.  But I got lucky this time — this was a chocolate malted crunch sundae.  Chopped up malted milk balls in there.  No good way to photo it in a styrofoam cup — but it was quite yummy: 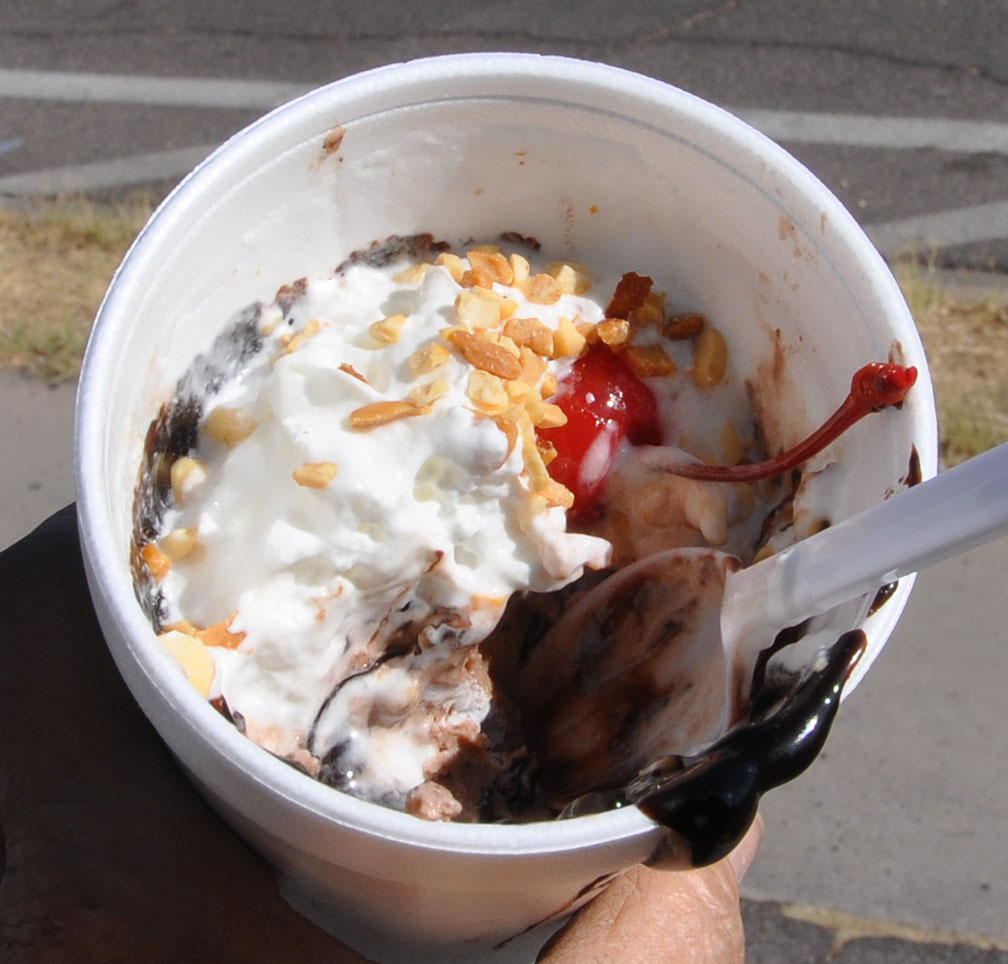 More food photos to come later in the trip… still have to find pie someplace.

As for the dogs, I found a fantastic place in Gilbert (outskirts of Phoenix) with a lake which has really been a blessing for them.  The Cosmo Dog Park.   It is BIG — with separate areas.  The are lights at night and the place stays open until 10pm.  I have been twice and will be back anytime we’re in the area.  I didn’t take any photos — but there’s one at this page:
http://www.gilbertaz.gov/parks/popups/cosmo-park.cfm
Whenever I see all those rules and regulations, I just ignore them.  Most parks have a 3-dog limit but I’ve never had a problem.  Also many parks have a “no food” policy but I always have dog treats with me.  Also many parks want you to have a local license or rabies tag on your collar.  But I’ve never been asked for that either.  So, if you’re traveling with dogs, don’t be put off by signs or websites — just go have fun.