The mechanic brought Sparkle over to the motel around noon-time.  Then I had to hit a series of ATMs to get the balance of the $5200 total.  The mechanic wouldn’t take a credit card — and I didn’t want to wait til Monday to get the cash.  Here’s Sparkle’s new nose job: 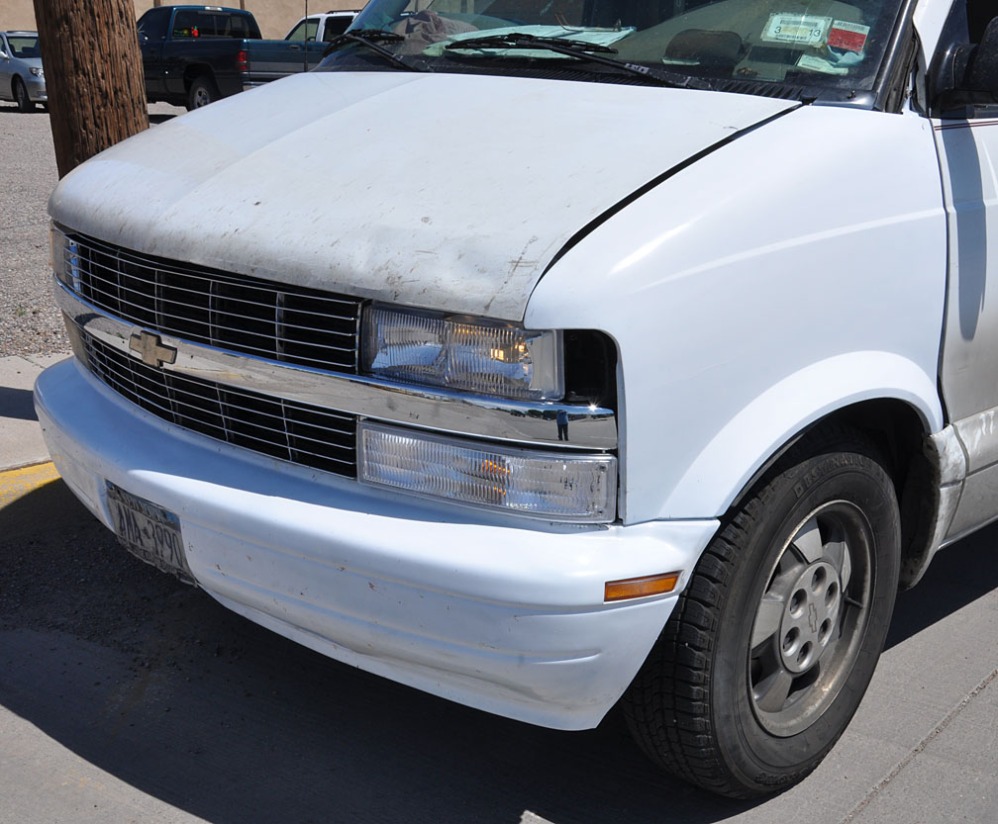 Not bad, eh?  A new bumper, new side panel, new lights, new grill.  They couldn’t find a hood but managed to bang the old one into shape.  Also missing a little reflector thing about the lights.  And I’ll have to get a new windshield when I get home.  There are a couple big cracks and NYC has very strict laws about that.  But really, these guys performed a miracle here.  They stayed up til midnight last night working on her.  What they did in two days would probably have taken at least a week, maybe two weeks, somewhere else.  And I think I got a really good deal actually.  The parts alone were more than $2,000.  I am SO glad I kept Sparkle — I really love her so much.  She is the perfect traveling vehicle for me & the kids and she was running so perfectly all day today — despite the heat, the hills and the hail (see later). 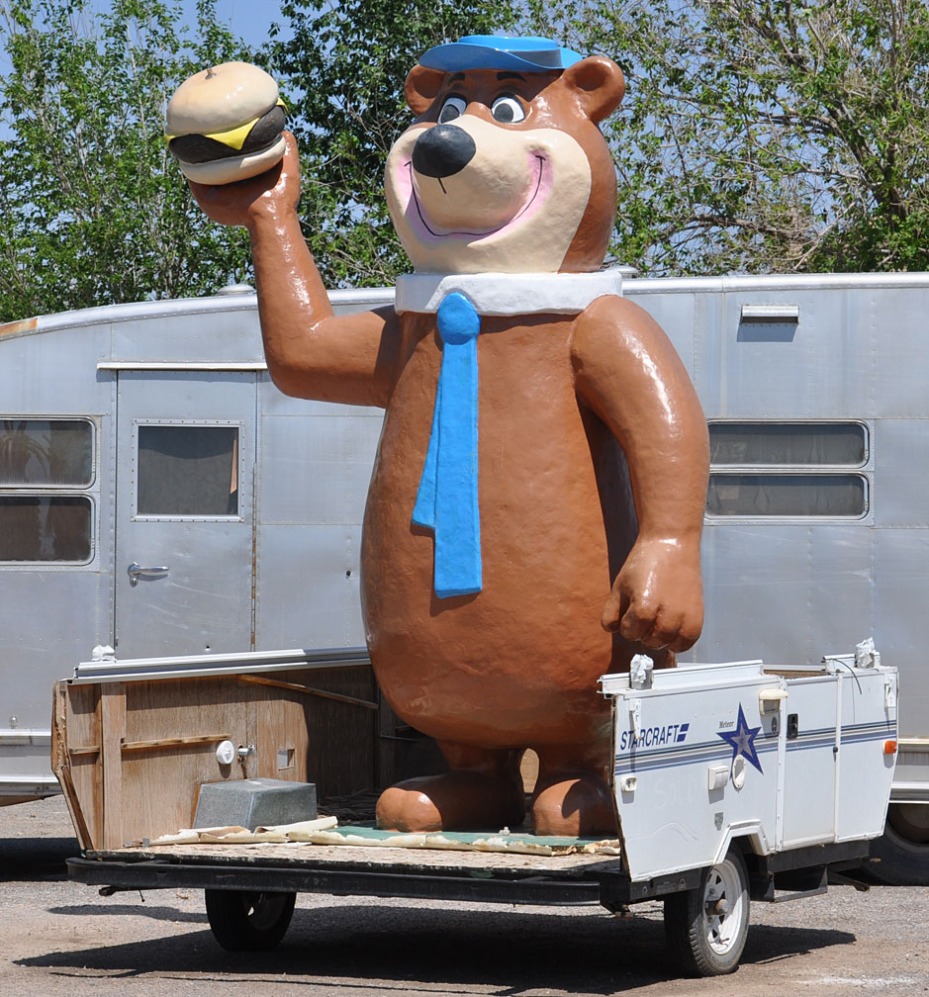 Back to Las Cruces which I started and then bagged a few days ago since the weather was crappy and I knew we had to pass back through later.  Today was perfect. 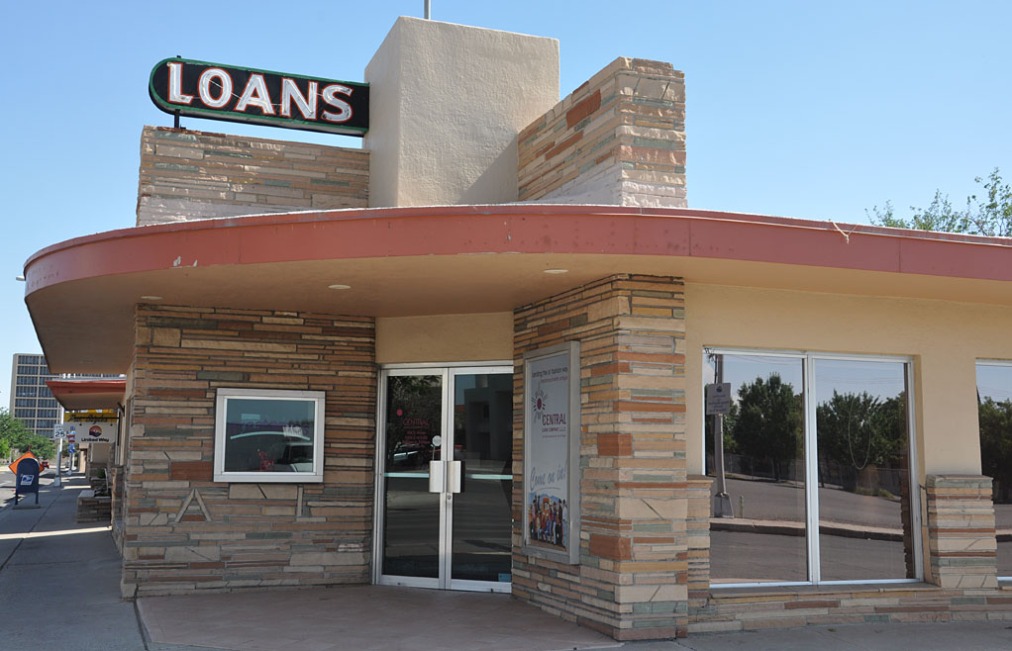 Just look at that blue sky — but it will be changing shortly: 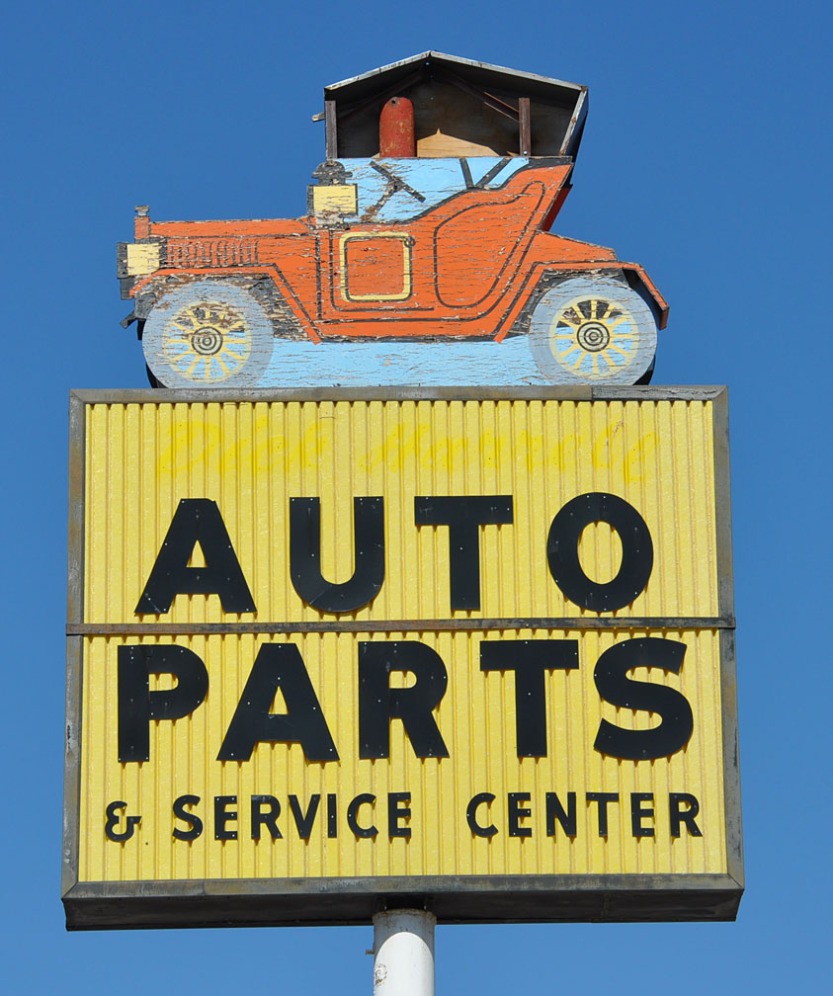 A closed saddlery shop — and what must’ve been a gas station sign support originally: 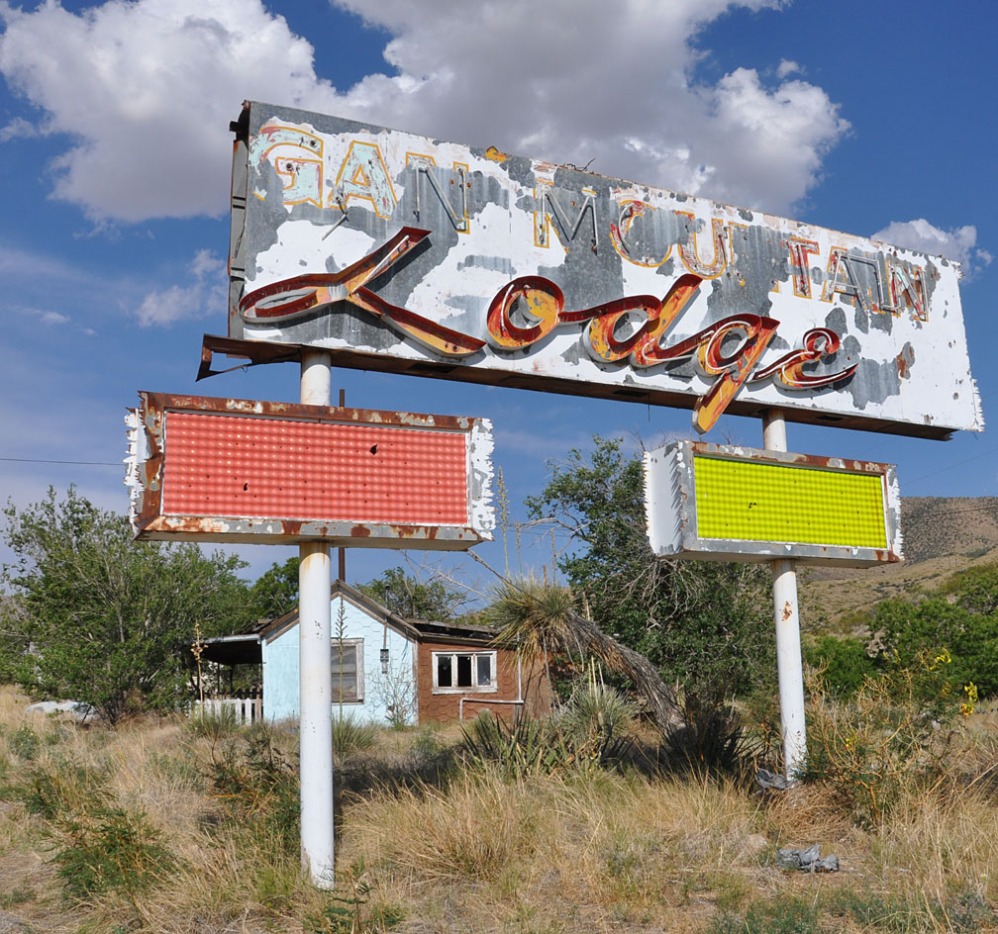 I’ve shot these Alamogordo rocket signs in sun before — but maybe these rain clouds moving in behind them are more dramatic.  I was relieved to see them both still there: 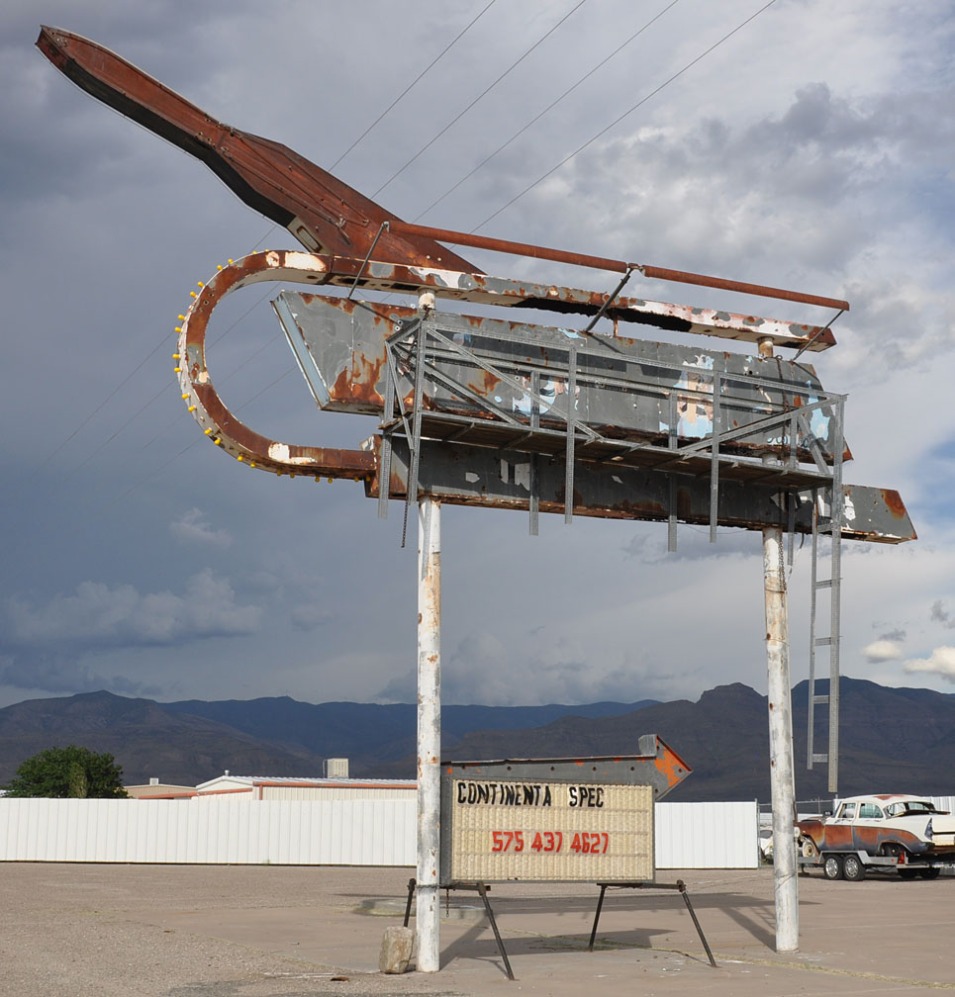 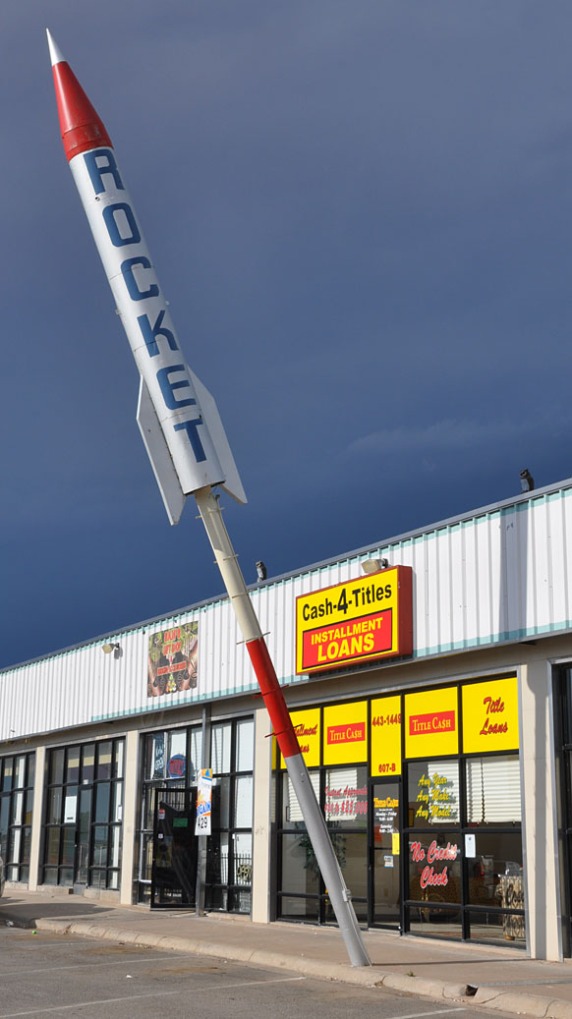 I was devastated to find that this sign in Alamogordo which I shot in 2008 has been replaced with a plastic box sign: 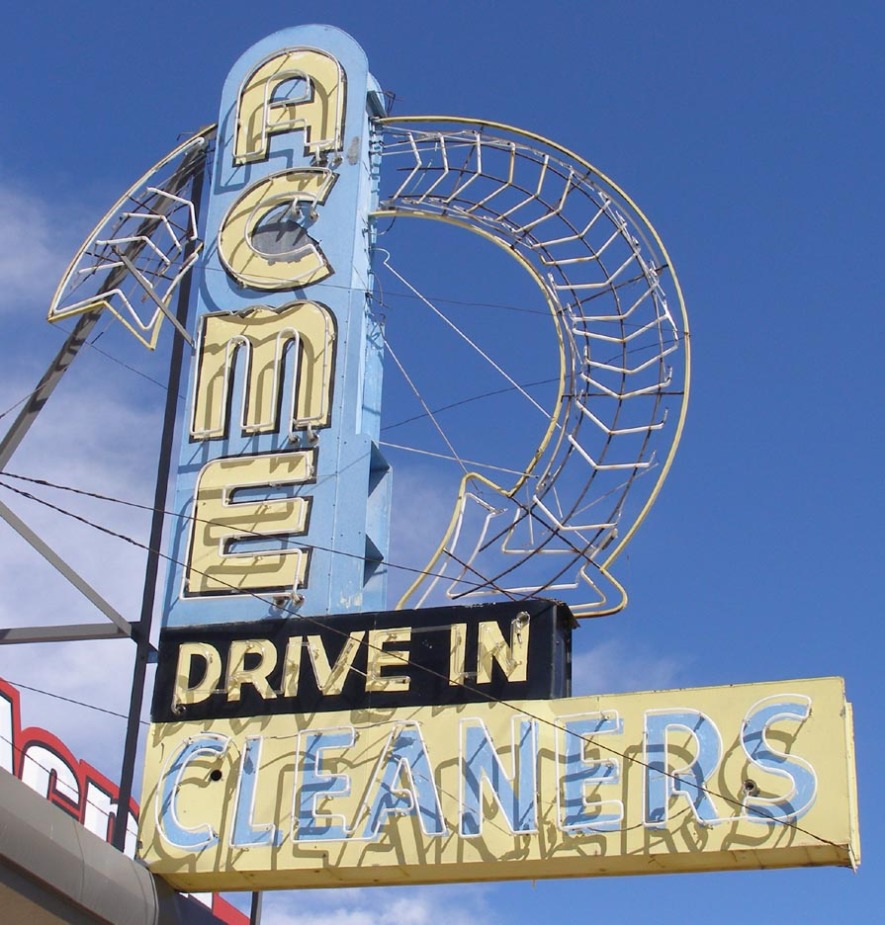 Heading up the mountain to the east of Alamogordo en route to High Rolls and Cloudcroft — first there was a dust storm (scary enough) and then it began to hail.  The hail bigger than peas, smaller than grapes.  I’d say bean-sized?  I don’t think I’ve driven on hail before and it felt pretty grindy & slippery.  I went SLOW.  Luckily, on the way back down the mountain, it started to rain and washed away the stuff: 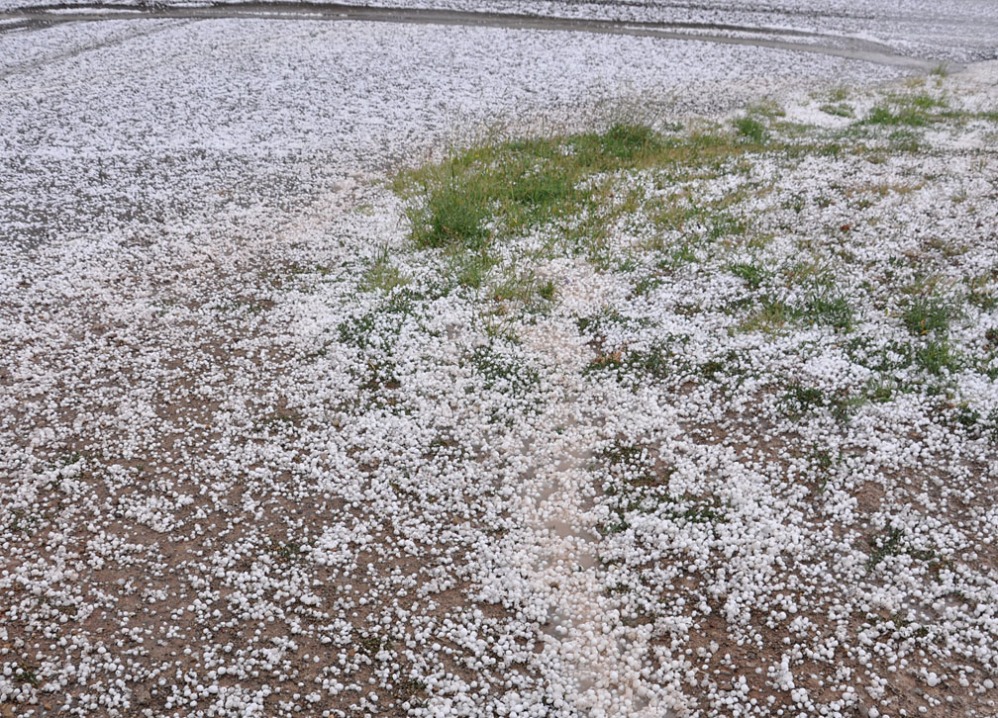 From Alamogordo earlier in the day — and then later at night.  The arrow is filled with chasing bulbs.  Too bad the “L” is missing from the night shot side: 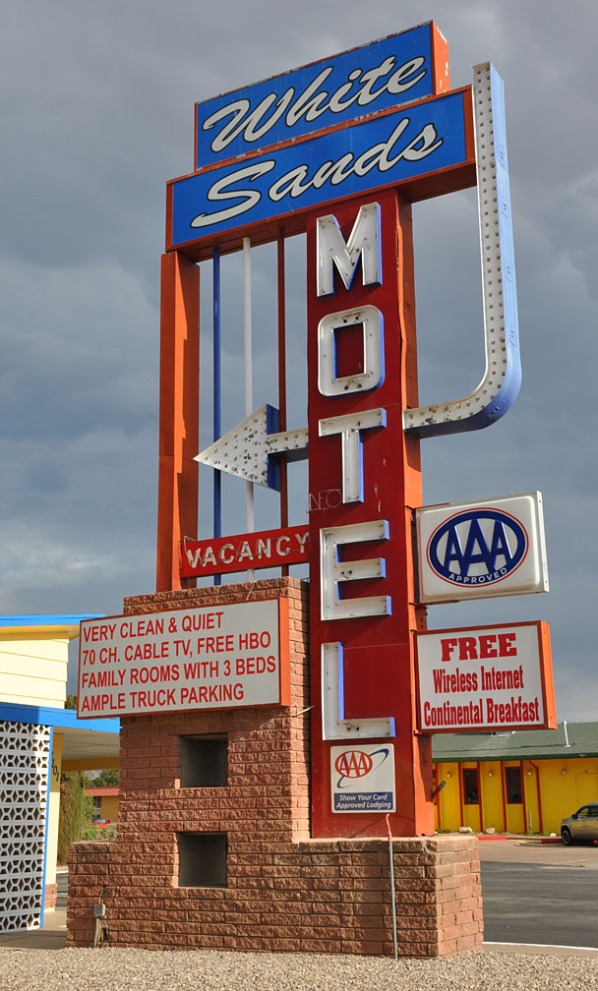 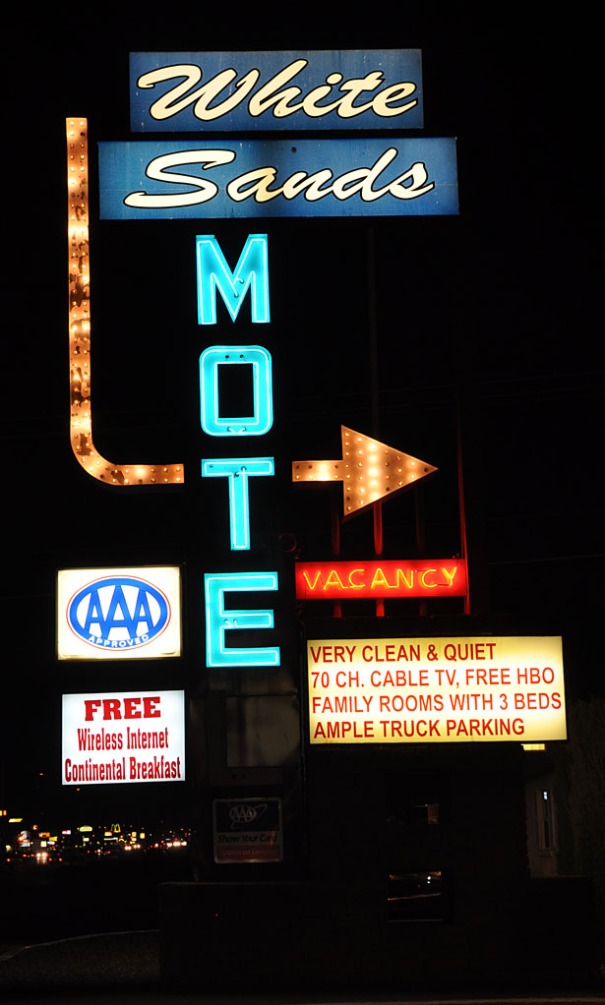 OK — so we’re back on track.  I hope the rain and freakish weather is done by morning.  Lots of central NM planned for tomorrow.  I’m so excited about it!  It feels SO good to be driving and shooting again.