Really put some miles in today.  About 70% of the day was heavy grey clouds — the rest was sun.  I indulged the dogs in beach time much too much.  But it makes me so happy to see them so happy.  I realized looking at the map later that they swam (well, all but Grippie) in three of the five Great Lakes today.

My second foray into Canada on this trip was a major time-eater.  The trip in went quickly, but the trip back took about an hour and a half.   I believe the delay (traffic backed up the entire length of a HUGE bridge) was due mostly to the actions of one power control happy border patrol agent.  My own interrogation lasted about 15 minutes.

I didn’t get asked if I had firearms or I had purchased anything.  I got asked much more personal questions.  How long have you lived in NYC?  I bet you don’t have a front lawn there.  I have the entire State Forest for my front lawn.  Why do you live in NY?  It must be awful there.  What do you do there?  Is that like graphic design?  My sister’s a graphic designer.   What were you doing in Sault Ste. Marie?  Why do you take pictures of things?  Do you get paid for that?  No, so why do you do it?  How long have you been doing that?  Where are you going?  Where will you be staying?  Re: the dog’s paperwork — I can’t really read this [the handwriting was perfectly clear actually].  Why do you have so many dogs?  Then he stuck his head INSIDE my window to look in the back of the van.  My madly barking dogs had every right to bite him right there — and I wish they HAD!  At what point can you refuse to answer personal questions?  How long can they ask you questions when you are being perfectly cordial?  After 10 minutes of his crap, I started to get peeved and started giving one word answers — that pissed him off and I was sure he was going to have me pull over for a more thorough search of my vehicle just to punish me for not being polite.  I will not be hurrying back to Canada any time soon.  I’ve crossed the border at Toronto dozens of times and never had a problem like this.

Let’s start today’s photos with a sad story.  I had really been looking forward to seeing this purple dinosaur in Cheboygan.  He was at an abandoned mini golf, sort of out the way and so you’d hope out of harm’s way.  Here’s a photo of him from a couple of years ago taken by my pal Mark (the guy with me in the photos taken earlier in the trip):

And here’s what was left of him today: 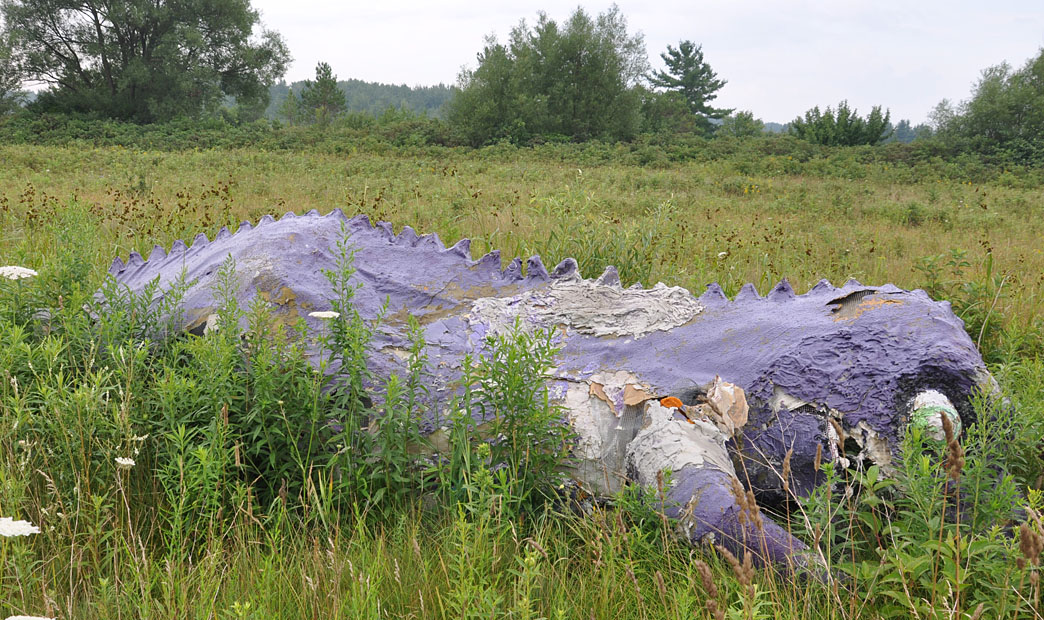 See them, shoot them while you can folks.  Here today, gone tomorrow.  No room or compassion in this world for purple dinosaurs.

Another in Cedarville.  Originally the Riverside Motel.  Les Cheneaux refers to the  channels (of water)  that the area is famous for. The owner came out to see what I was up to and was fascinated by the concept that there are folks like me that will drive for hours just to admire and shoot signs like this.  He has to have his neon repaired by a guy in Traverse City (huge distance and expense) but he keeps the sign going. 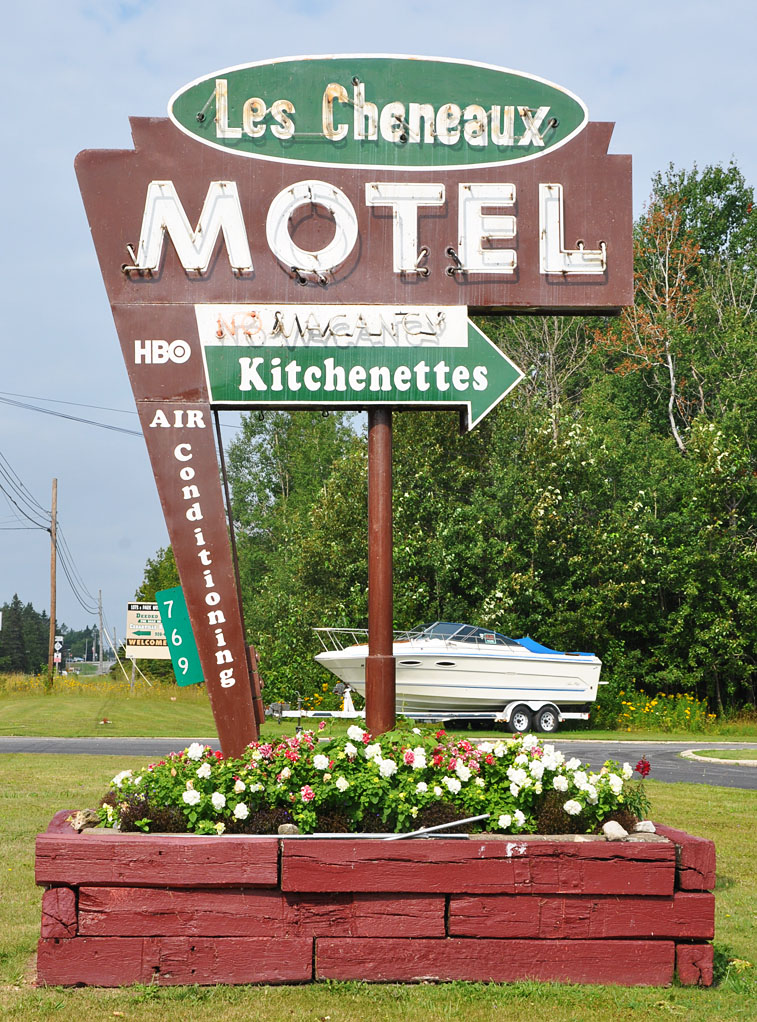 On to some photos in Sault Ste. Marie – the American side.  This sign is unusual since you can drive under it.    This old postcard shows that it has always been like this:
http://www.flickr.com/photos/loungelistener/2919591041/
Unfortunately, the striped building is gone.

The main attraction in Sault (pronounced “Soo”) Ste. Marie is the huge ships navigating the Soo Locks.  Here are three signs with references to that.  This one obviously heavily remodeled, retexted, neon holes patches & a ship stuck on there.   Still charming in its simplicity, color scheme, and silliness: 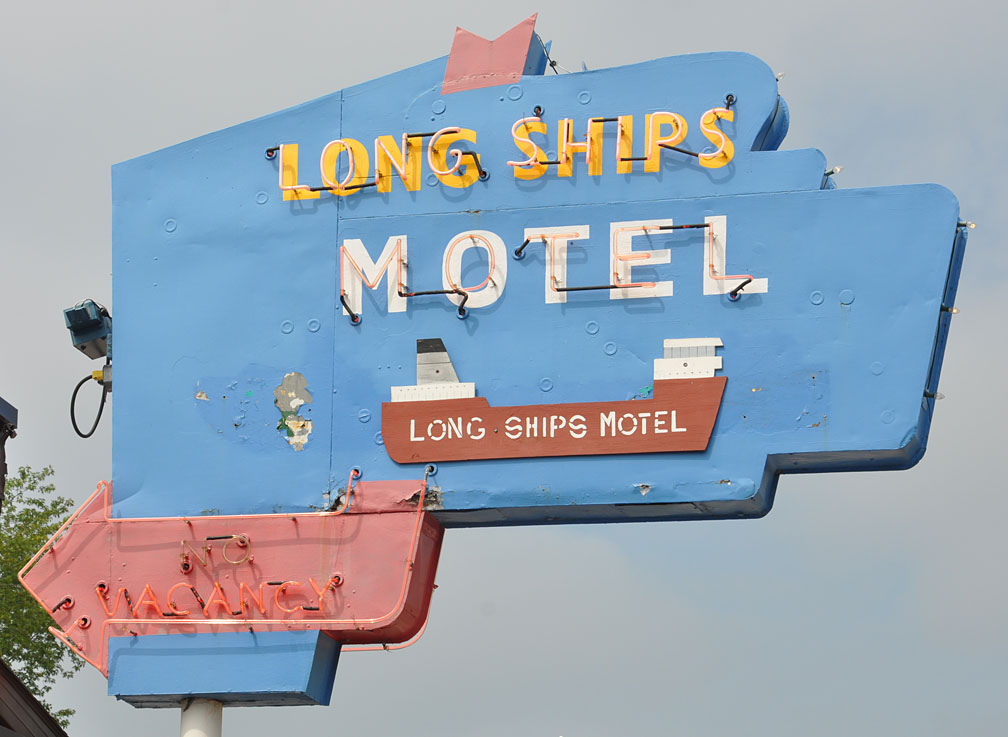 This one’s been left to die it seems.  Looks like a bar made a go of it — but the building’s vacant now. The sign’s ship barely recognizable now with peeling paint.  Here’s how it looked just a few years ago:
http://www.flickr.com/photos/732mpd/2711552377/

Neon glowing during the day on this one — right across the street from the Locks:

On to the Canadian Sault Ste. Marie.  I’ve not seen a Pepsi sign like this one in the States:

The Canadian A&Ws still use the Burger Family in their advertising and signs.  We never had the Grandpa here.  But I don’t think they ever had the statues there:
http://www.agilitynut.com/giants/aw.html 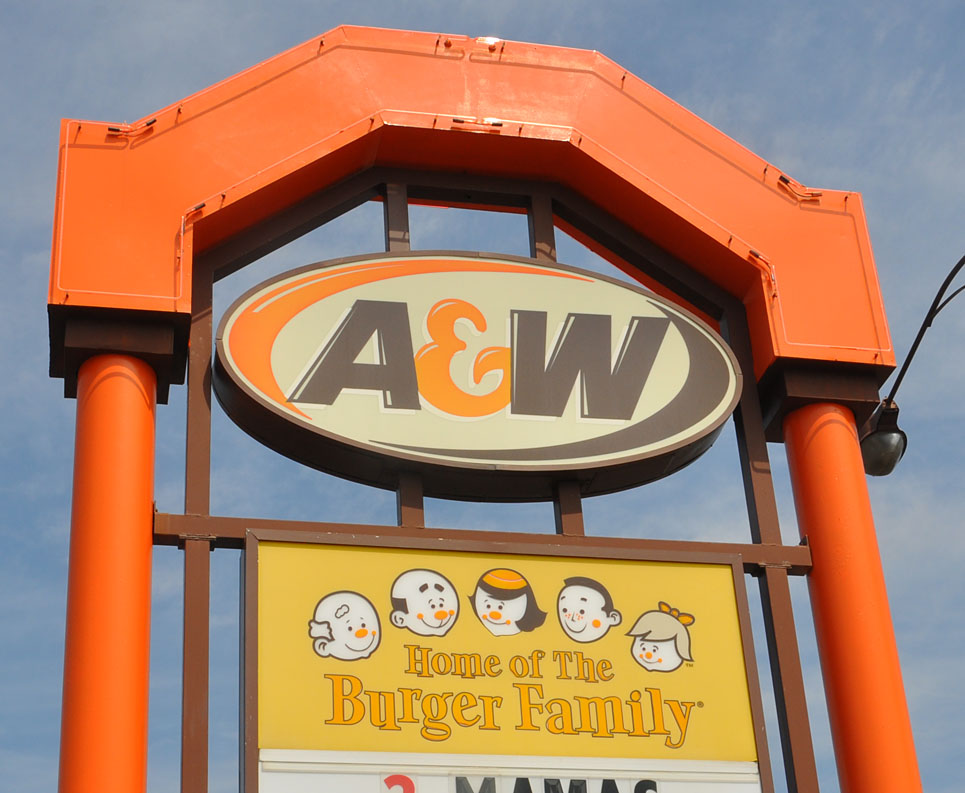 Silly make-you-stop statues are not unique to the U.S.  These are from the Trading Post which is a combo gas station, hunting/fishing supplies place, and fast food place:
http://www.trading-post.ca/

A detail from the Blue Flame Gas Service sign.  Tricky because it’s protected with plastic:

Back in the States.  As I was losing daylight and trying to make time towards Manistique, I was reflecting on how I hadn’t gotten any souvenir speeding tickets in Michigan.  Not 15 minutes later, I got pulled over.  77 in a 55 — straight line, no cars anywhere, forest.  The U.P. is all about trees and water so it’s very tempting to raise the speed a notch up here.  These cops were very nice — wrote the ticket as a 60 mph.  But I had to post bond since I’m a non-resident — meaning give them some cash towards the ticket.  Luckily, I had $50 and gave it to them which they noted on the ticket.  Most of the time, I have less than $20 on me.  Otherwise… what, they would have arrested me or escorted me to a cash machine?

So, at least the delay and lightening up on the gas pedal meant I got to see the Colonial Motel sign in Manistique with its lights on.  It’s been repainted since a couple few years ago — I preferred the yellow myself:
http://www.flickr.com/photos/732mpd/2763241601/ 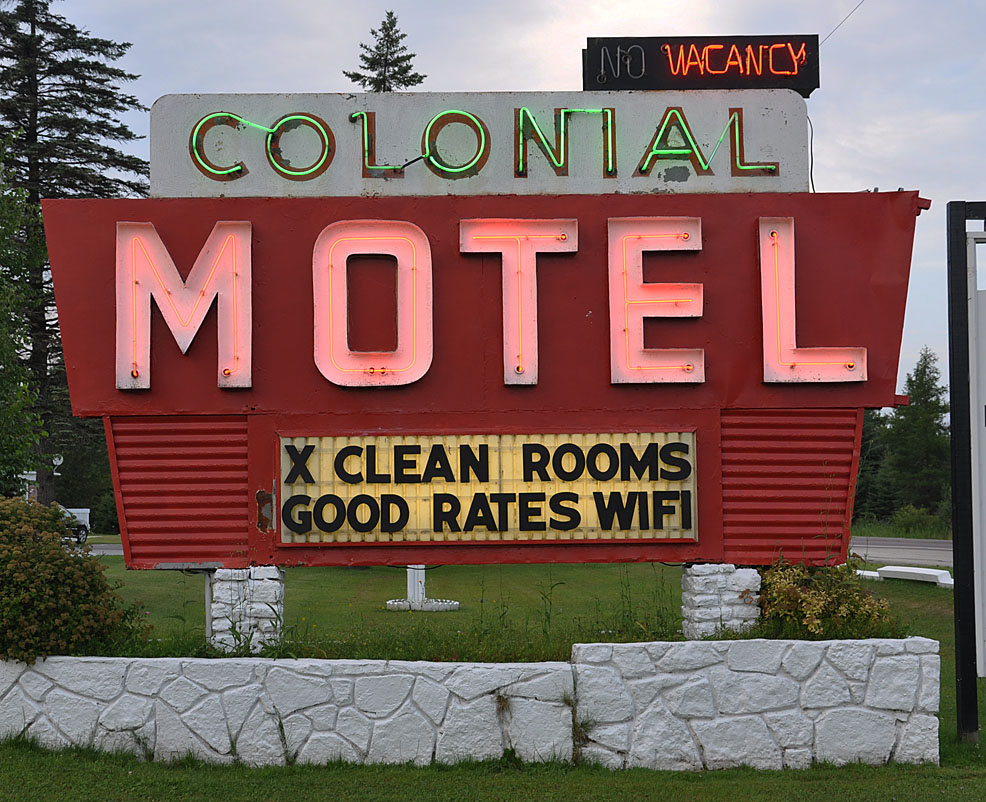 More from the U.P. tomorrow.  And then maybe on to Wisconsin.