Covered a lot of ground today — should be in the U.P. by noon tomorrow.   For folks unfamiliar, the U.P. is that upper, northern chunk of Michigan known as the Upper Peninsula.  Lots of driving up there between stuff so I hope Sparkle’s ready for the wilderness.  No warning lights or anything at all today so I’m feeling pretty confident.

Gorgeous skies with not too much cloud interference.  A good part of the day on the coast — so nice breezes and much doggie screaming.  Usually a couple of times a day is enough for them, but Nik & Grem have been lunatics all day long on this trip.  Between the water views and the motorcycles the past couple days, I’m sure I have hearing loss.

Let’s start with a safe photo-op – no animals anywhere.  But then, you never know when a suicidal squirrel might run by.  These cartoon character statues used to be on the beach — now at the library — in Tawas City.  Will anyone remember SpongeBob in about five years? 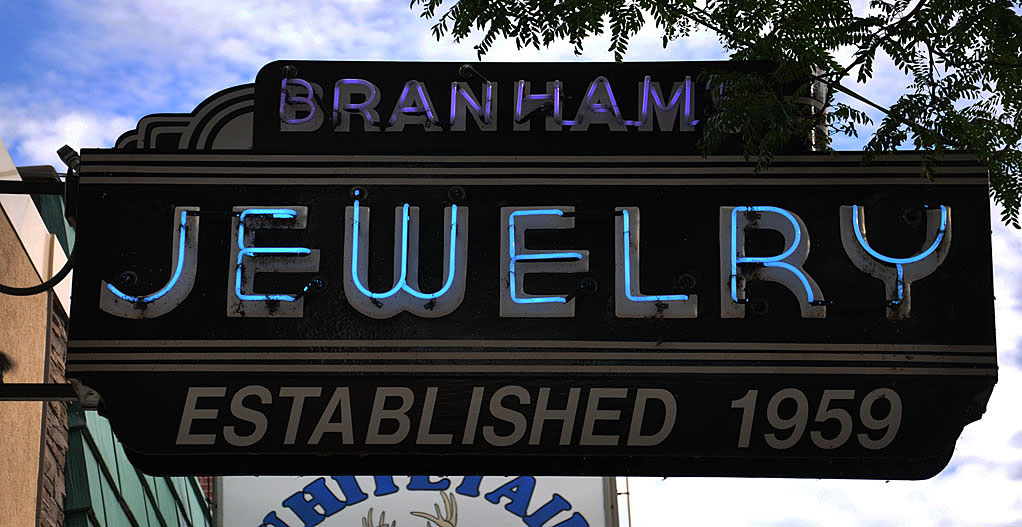 I saw another one of these signs a couple of days ago at another car dealership and regret not taking a photo of it.  I’m not even sure I wrote the city down in my notes.  This one is at Dean Arbour Chevrolet Cadillic in East Tawas.  I think it’s a graduate — like a nudge to Mom & Dad to buy the kids a car for graduation? — but I’m not sure since this guy’s not holding a diploma.

From Au Sable — competing gas stations — in the water!  I’ve never seen that before:

Houghton Lake still has some vintage gift shops and other fun stuff.  The Rocking Chair gift shop reaches out to passing tourists with these alluring statues.  In addition to these, there are numerous other animals and another teepee:

This one is from Bear’s Den Pizza in Grayling: 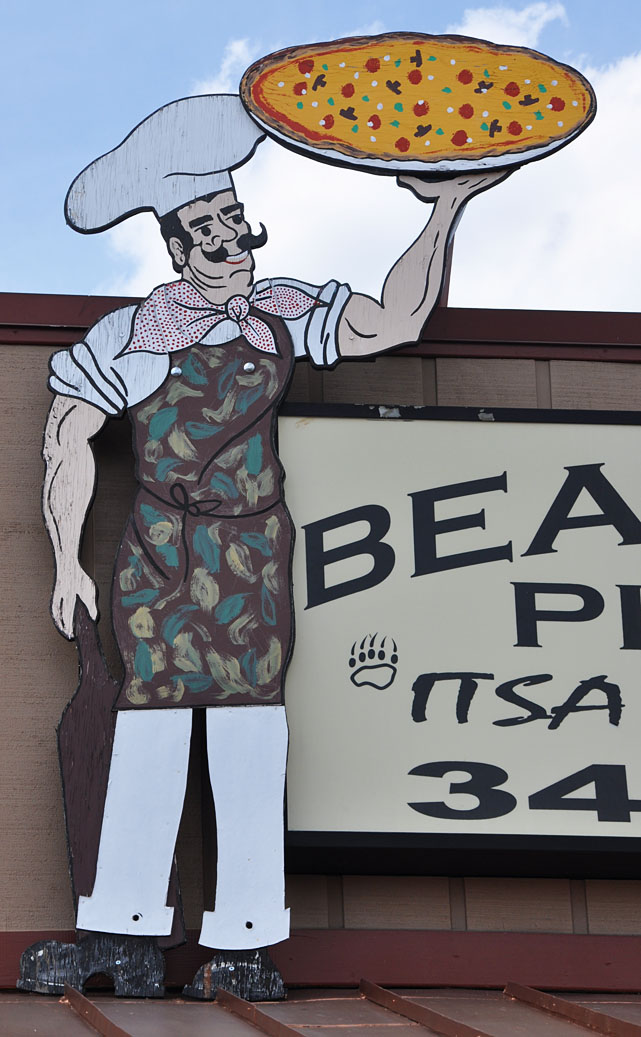 I’ve got a thing for people, animals, things signs, if you hadn’t noticed by now.  My next Journal article for the SCA (Society of Commercial Archeology) will be about pizza chef signs.  This sign won’t be featured in the article but I’ll include him at my companion page.  I’ve just started that page so it’s in rough shape but if you’d like a peek:

I’ve still only had one slice of that pie from yesterday — but I just had to pick up some fudge and help support Doug Murdick’s in Traverse City.  I also needed to show the comparison of the giant box of fudge with a real one:
http://www.flickr.com/photos/agilitynut/6012997947/

I’ve just had a small bite but it’s incredible.

I went with the Rocky Road — but it was a tough choice:

Also in Traverse City:  Rounds Restaurant.  I can’t find any info but it’s gotta be 1950s or 1960s.  The white part of the sign is, naturally, round.  Don’t know if this was the original name.  Traverse City-ers please chime in! 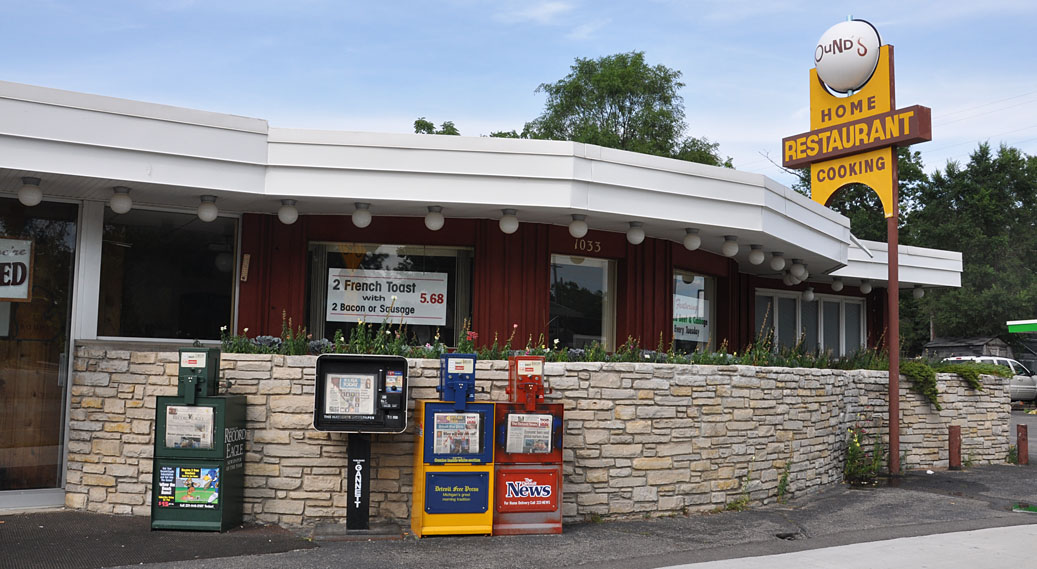 Another cool restaurant in Traverse City.  I don’t know when this one opened — or how much of this stuff is original or part of a remodeling — but it’s all good and fun.  The place closed last December but then reopened in June:
http://record-eagle.com/local/x2035756290/Flap-Jack-Shack-shuts-its-doors

Losing light badly in Charlevoix but I’ll include these photos anyway to wind up this post.  There are about eight of these “Gnome Homes” built by Earl Young, pretty much next door to one another.  For more info, this site covers the history well:
http://charlevoixparkavenue.wordpress.com/guidebook/the-earl-young-houses/

This is my favorite — the smallest of the bunch: 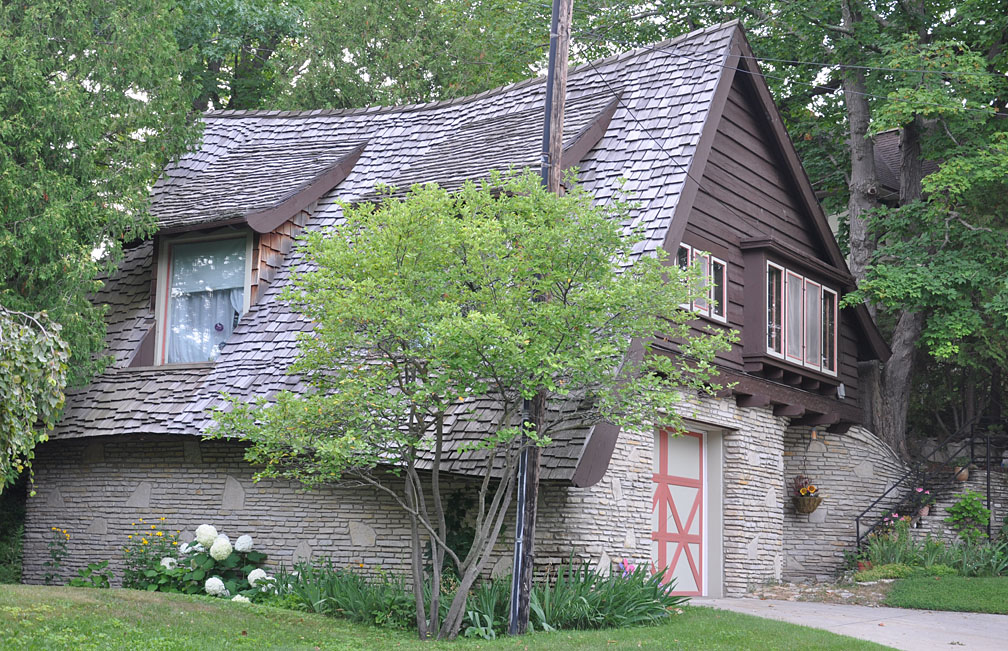 And a big restaurant in town built by the same guy:

Alright then — I’ll be writing to you tomorrow night from some forest-y location.  I’ll be careful with the monsters since I’m sure there are deer and bear and moose and all kinds of things they’d love to go after.

8 thoughts on “Day 14: Wrapping up the Michigan Mitten”