There were lots of towns on the outskirts of Dallas today — and will be more of them tomorrow.  But really, finally, tomorrow, we MUST be doing the Dallas stuff.  Only five days left for Texas then must start on Oklahoma.  The weather was spectacular, blue skies all day long AND in the 70s I think.  We didn’t mind not having AC for a minute.  Maybe we’ll tough it out for the rest of the trip.  It’s almost the half-way point.

No problems with ducks today.  The dogs mostly got fields instead of water.  A couple big lakes that we passed and Grem & Nik were VERY disappointed — screaming and then sulking when I didn’t pull over.  Sparkle’s running great.  I’ve been turning off the engine and having no trouble starting at all even when the engine’s warm.  Still, I wouldn’t try it in a skeevy neighborhood.  Gas has gone from $3.49 to $3.79 per gallon during this trip.  I hear it’s $4.15 back in San Francisco (the highest in the country right now).  Very boring food the past couple days.  Snacks mostly, like scones, muffins, veggie Subway sandwich, Panera cookies….

On with it.  The day started in Hillsboro.  This building must’ve originally been used for the gas company — a nice double-sided flame sign.  A different style but it reminds me of one in Fort Worth:
http://www.flickr.com/photos/agilitynut/112727764/

I was really looking forward to finally seeing the giant frogs on the gas station canopy at Carls Corner — which I’d heard was now really Willie’s Corner (Willie Nelson’s biofuel station):
http://www.flickr.com/photos/alanweinkrantz/196654214/
But, alas, no frogs and there was just a normal looking Exxon station there now.  And the only trace of Carls now is what’s left of this sign east of there:

I was hoping that the Wampus Cat statue (local sports team mascot) had returned to Itasca after being damaged and removed during a storm:
http://www.flickr.com/photos/meknits/376045868/
But no, the folks at the Exxon station said that the city had him now.  So, of course, off to City Hall I went.  I got a personal escort vehicle to the outskirts of town just so I could see him.  He’s not as damaged as I’d imagined.  Yes, missing his paws but still basically in one piece.  His foam is really showing through though and fixing him up would be a challenge.  I personally like him lumpy and hope they don’t either a) smooth him up too much or b) just replace him and destroy the original.  I was told that a bank had been interested in restoring him but that fell through:

So while I was sleeping, little did I know, there were tornados and windstorms going on just north of me.  I start noticing a lot of scrap metal on the sides of the road, street lights that were out, blown out signs, and damaged buildings.  I initially assumed maybe it was from a month or so ago.  But then I was told it was just last night!  This building in Lancaster gives you an idea:

It seems lots of towns east of Dallas got hit.  I saw damage in Mesquite but this beauty was untouched thank goodness!  It was mostly the cheapo plastic signs that got busted up — another reason to stick with steel & neon folks.  Any maybe those curved edges help deflect the wind as well?

One more from Mesquite.  I saw this guy from the highway and just HAD to have him.  A nightmare of service roads.  Despite help from my iPhone GPS, it took me about 20 minutes to get him — but SO worth it.  He’s on the roof of Town East Plumbing & Heating:

In Forney — I went to DeRidder Antiques to shoot a dinosaur which was hiding behind their building.  While there, I saw some other interesting items including these — a Fisk Tire Boy statue.  He would have held a tire in his right hand and a candle in his left: 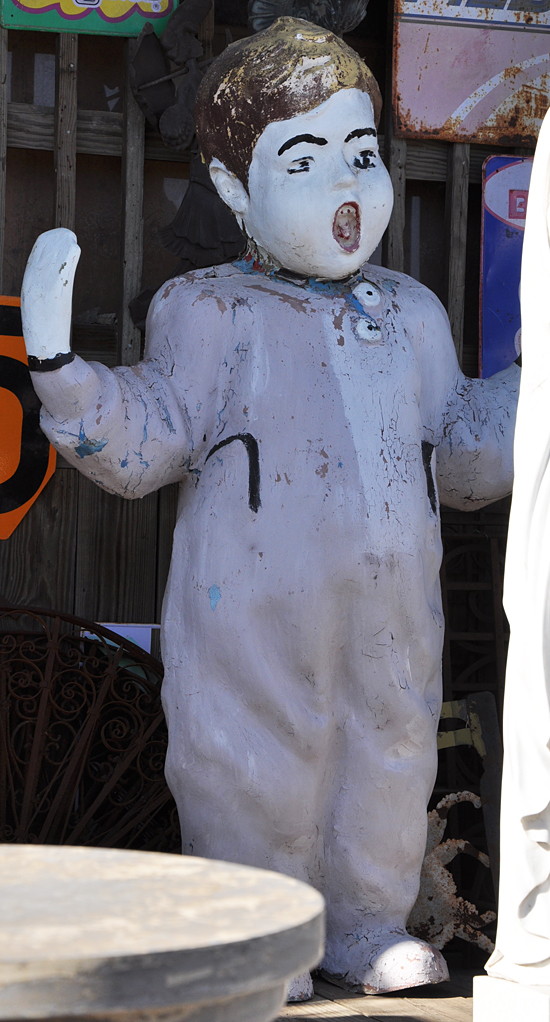 a neon Van de Kamp’s sign — those blades would have turned originally:

and this bowling sign which I have not seen before:

So that’s it for the night.  A big day tomorrow with city traffic and a huge list of destinations.  Best to stock up on sleep.