Yes, the weather was incredible.  Lots of pretty photos — and incredible distances covered.  My stomach is getting a bit better — still lots of troubles.  But I took a big chance on a half a burrito tonight.  Just dying for something real and warm to eat — regardless of the consequences.

Sparkle running great.  But.  Two little new items of concern.  The tiniest of brake grindy sound that I think I hear.  Just had all new brakes and rotors installed before this trip.  Have heard this before years ago — a caliper or something?  Something dragging.  Will stop in at next dealership I see and see what they think it is and if it needs immediate attention.  The other thing, more worrying, is two times in a row late this morning when I turned the key, nothing happened, turned again & started fine.  So after that, I resolved not to turn the engine off even for gas.  That’s about the only time I ever turn the engine off anyway except for extended dog romps.  So upon stopping for the night, I turned the key, started fine.  So I will be extremely careful where I turn the engine off.  Most likely a starter.  Can’t be a battery (turns over just fine).  I think this will be harder to diagnose until it stops working.  I dread losing another day or two somewhere on this trip with repair delays.

The dogs got three good beach runs in before noon.  I gave them extra time since I know we won’t be near any beach for a long time.  Certainly not on this trip unless we score some lakes & rivers.  Nothing beats ocean or Gulf beaches though.  Although the Great Lakes are pretty awesome.

On with the photos.  I got settled late and am fading fast.

with what I call corduroy concrete:

A few other things from Corpus Christi  — a closed furniture store:

I don’t recognize this building as part of a chain.  Looks like a super skinny Pizza Hut roof.   It just had to be SOMEthing:

This must have been a drive-in restaurant originally.  Had a classic drive-in style canopy.  But now seems more like Mexican take-out:

A local icon (or eyesore depending on your point of view).  This “For Sale” statue done by a local artist has been at this intersection since 1984: 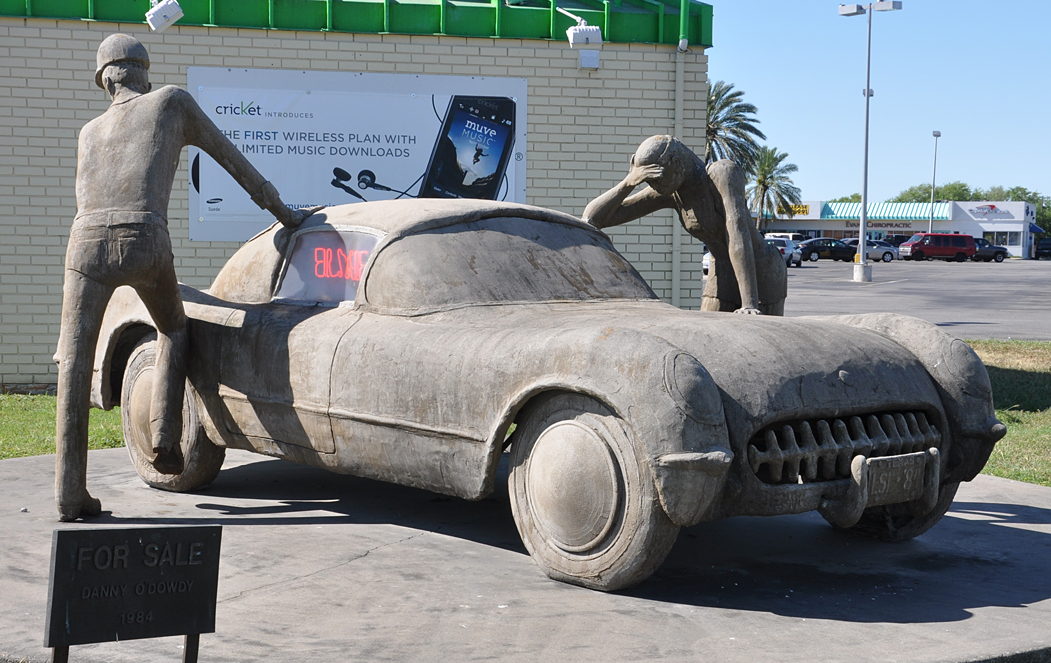 A modern Whataburger has painted this storage building like an old walk-up stand:

This mind-boggling display is on North Padre Island.  The place is known as the “Ocean Treasures” gift shop:

This one from Kingsville.  I don’t know if this was originally a movie theatre marquee — or if the sign was just built to look like one.  I could look it up… but since it’s 2am right now…

A few signs from Harlingen.  Those appear to be neon loops around the canopy edge: 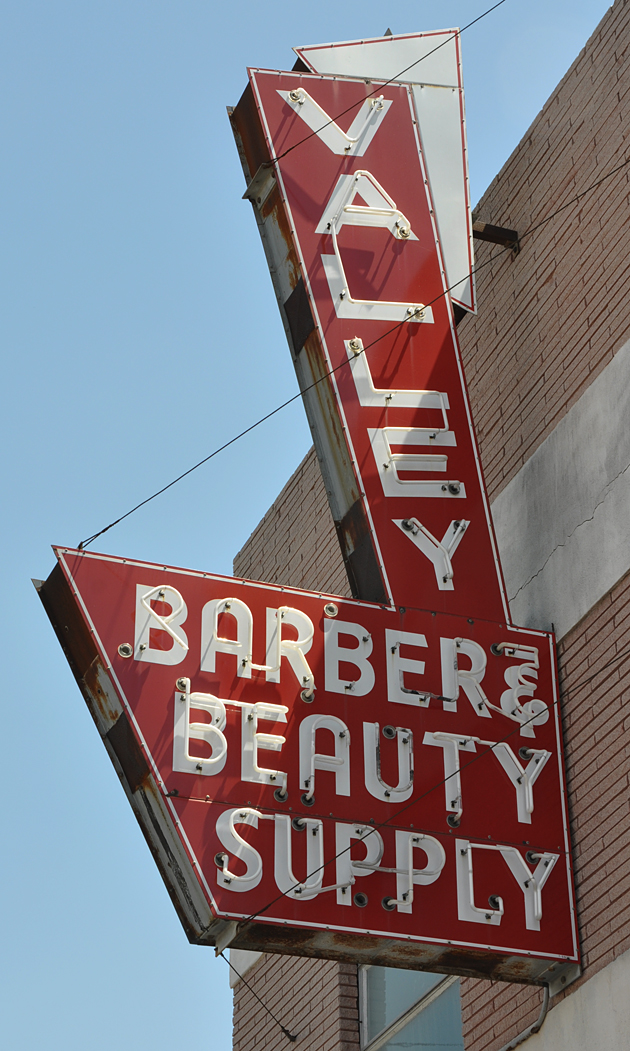 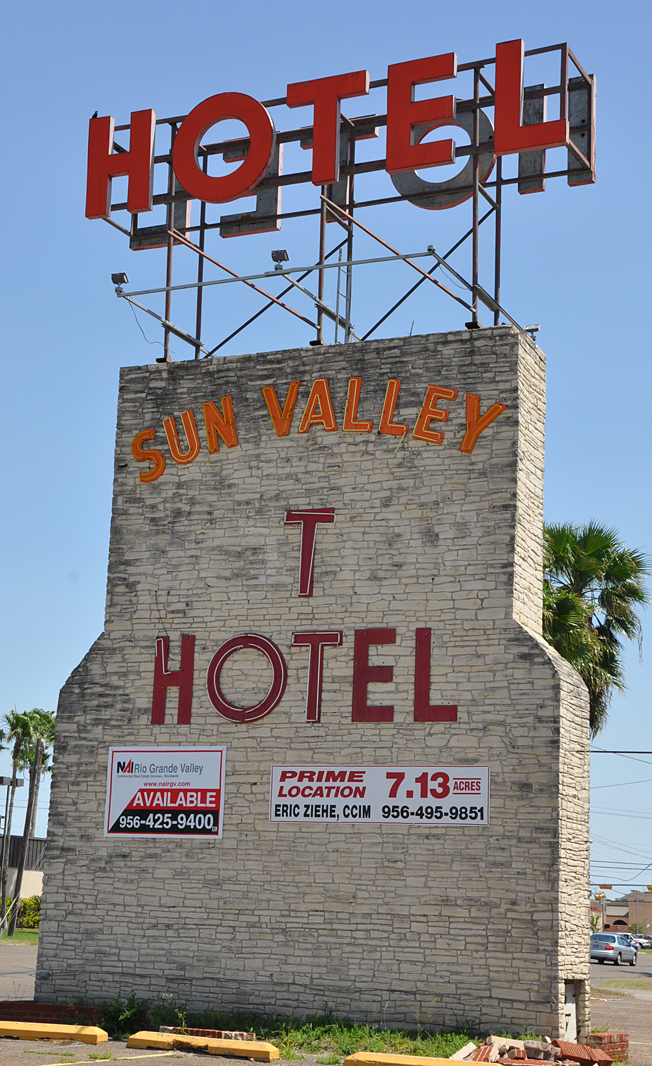 And finally, a couple shots of my companions at Seven Seas in Los Fresnos.  I used the same photo-op a few years ago — but it was freezing cold and grey skies: 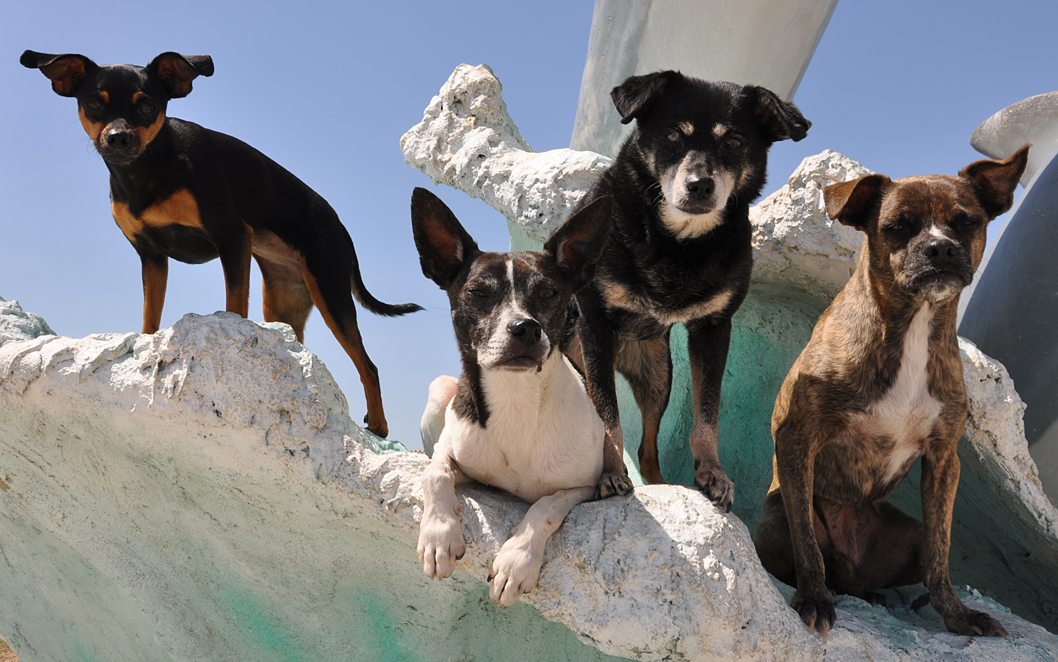 Tomorrow, if the starter works, we’ll be hitting a bunch of small towns for quickie stops and hopefully by afternoon arrive in San Antonio.  I think I have about ten days left for the Texas part of the trip.