Time to finish up this trip.  Back home, back to work.  Time to really hunker down and get to work on 6,000+ photos waiting to be inserted into the website.

The sun was out about 35% of the day — about the best it was the whole trip.  I hear it was sunny back in NYC the entire time.  The big news:  no smudgie on the lens today – thank goodness!  The day began in Auburn — here are a couple photos from there.  John Stevens is gone — don’t know what the business was but there’s a coffee bar there now.  Nice little Art Deco fins:

About 50 feet down the block is this sign.  No longer a bar there — building is vacant:

Okay, okay — I know you’ve been waiting for the junk food shots.  Had to show my support for the recently reopened Donuts Delite in Rochester:
http://www.flickr.com/photos/agilitynut/5015836430/

Fixie knows something good is in this box:

With a long drive ahead, I stocked up.  Two of these actually made it home with me.  From left to right, clockwise:  raspberry (with raspberry gumdrop on top), peanut butter & jelly, banana cream, and sour cream.  The PBJ was sensational.  Jelly inside lumpy like real preserves, pb icing, pb cup on top with Reese’s pb pieces, peanuts.  The sour cream was heavy — in a soothing way — a meal in itself.  Banana cream was so-so (I forgot that I don’t like powdered sugar).  Raspberry was good but that white icing was a bit too sweet for me.  They had much more traditional donuts as well but I usually go for the exotics.  Surprisingly, I didn’t see the apple cider donuts which are big everywhere at this time of year.  Even the gas station c-stores seem to have lots of them on hand.

Some more stuff from Rochester.   The Dancing Wings Butterfly Gardens, part of the Strong Museum of Play, is about five years old.   It is meant to resemble a butterfly in flight:
http://www.museumofplay.org/about_us/press/dancingwings.html

I don’t know what business was here before (gears?) — but very nice tilework was left behind.  The building is now “available” but part of it is inhabited by a post office.  Hopefully, this artwork will survive: 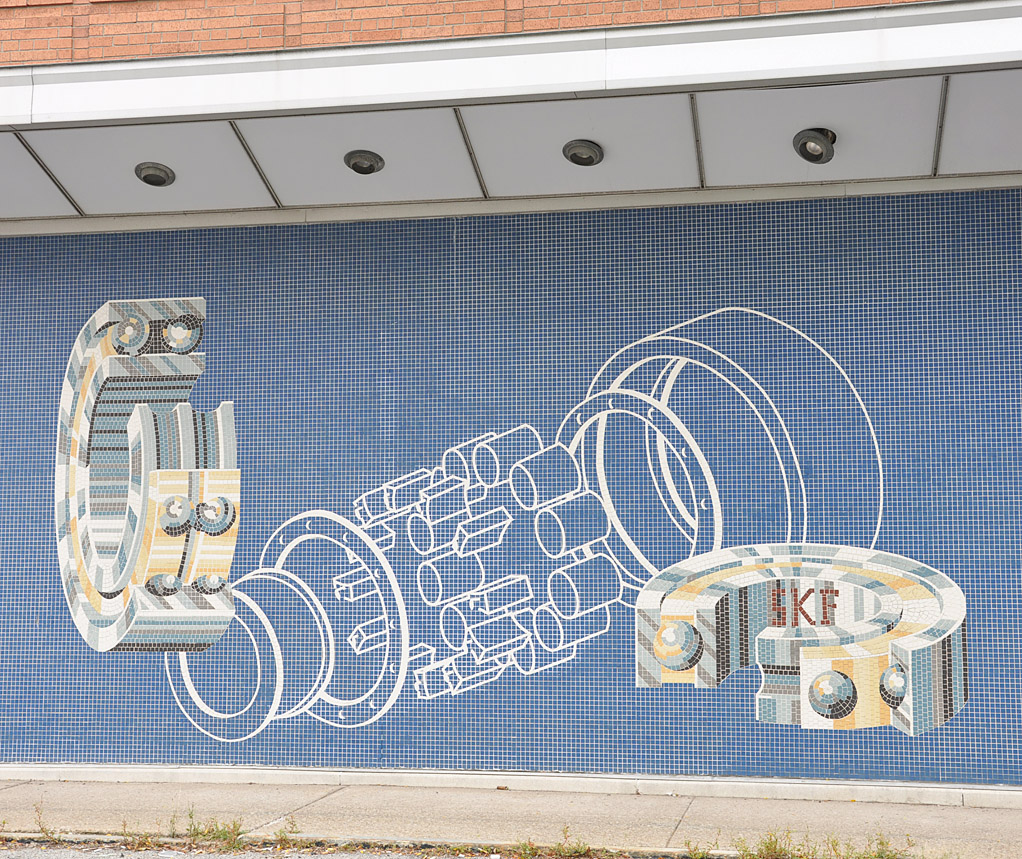 Finally, some doggie pix.  These guys had a great trip.  Lots of water and fields everywhere we went.  The water was pretty cold which would have Grem & Nik shivering mightily for about 20 minutes after swims.  Fix & Grip rarely went in past their knees.  If you’re new to these blogs — that’s Gripper on top of the dog crate (pantry) and left to right Sputnik, Gremlin & Fix.

The crew is waiting patiently for the okay to hop out into a few minutes of paradise and chaos: 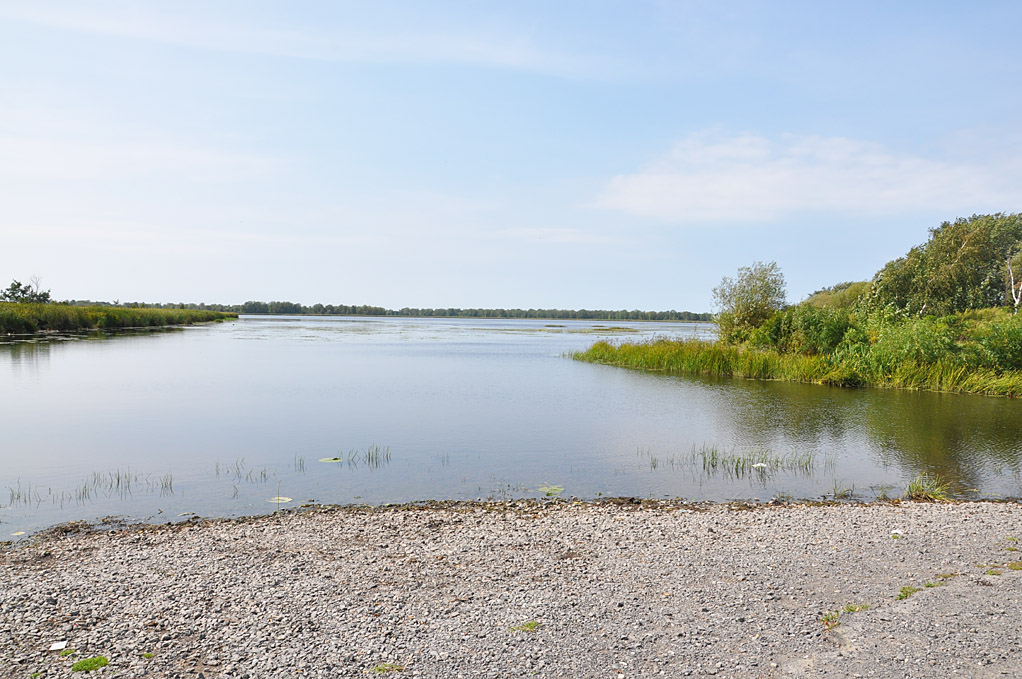 You’ll have to use your imagination here to visualize Nik’s manic barking and swimming after ballies being thrown into the water.  Grem and Grip were mostly busy scoring chicken bones.  Fixie was off flirting with a fisherman nearby.

I’m a big fan of plumbing signs – particularly those with depictions of leaking faucets.  If you’re a member of the SCA, I did an article about them recently.  Some of the signs that I covered are here (not updated yet there is the Moyer sign which was restored a couple months ago):
http://agilitynut.com/sca/plumbing.html

If you’re unfamiliar with the SCA (Society for Commercial Archeology), it’s a great roadside organization that I’ve been a member of for more than 20 years.  I’ve also been writing the Signs columns for their publications for a few years now.  There’s a conference coming up next month in Arkansas that sounds like a lot of fun:
http://www.sca-roadside.org/

Anyhow, yes, plumbing signs.  This one came as a surprise to me.  I was here to see the painted sign in back (see below) — but no one has ever posted photos of this neon sign.  Perhaps it’s because of the crappy plexi paneling that protects it.  I ran into the owner and he says the sign is lit at night.  Next time I’m near Rochester at night, I’ll be sure to check it out.  The owner said it used to be animated but that’s forbidden by the city now.  He also said there was a different neon sign before this one — taller with sequential drips. 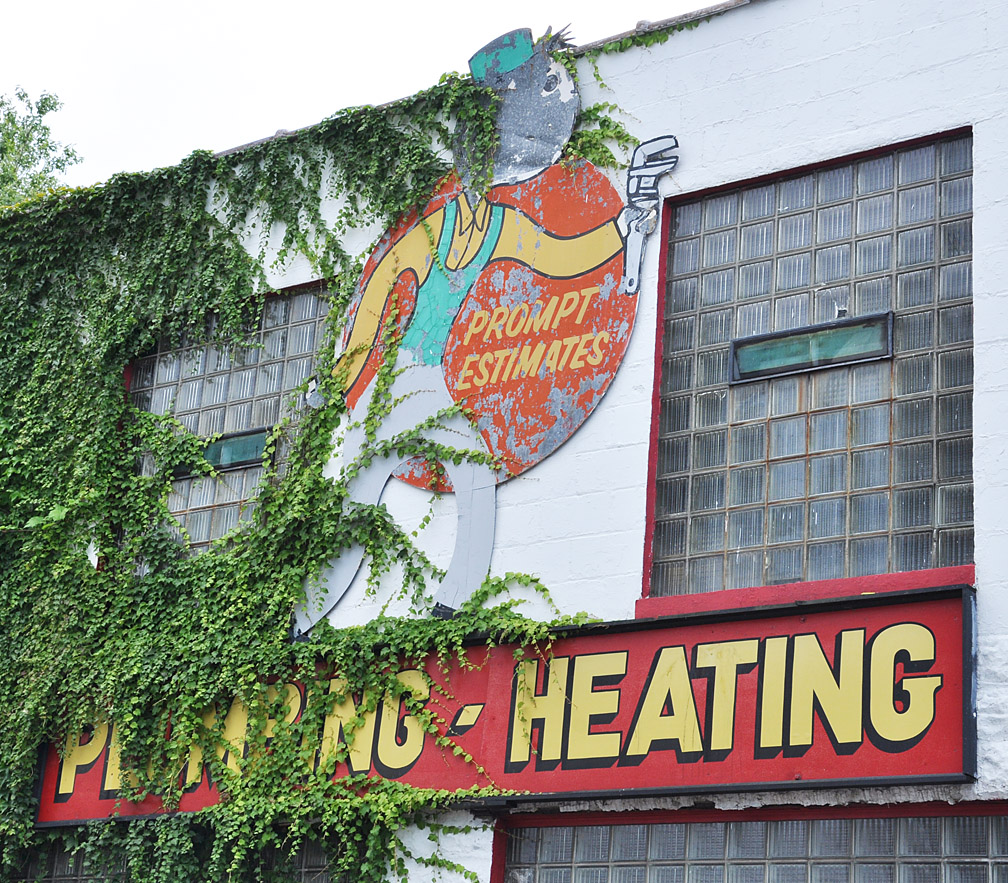 but only found out about this one in Medina recently.  It was installed around 2000.  The “kids” were happy to pose for scale:

After all, it was dinner time, and mama had the bowls and can of food with her. That’s the Erie Canal in the background.

So, that’s it for this trip.  If you missed the Flickr photos (different ones from the ones posted here), you might want to check those out here:
http://www.flickr.com/photos/agilitynut/

I’ll probably do another little four-day trip in October  (some stuff in MA, CT that I didn’t get to this year).  And possibly an Xmas trip to finish up some of the NY stuff from this trip that didn’t happen.  The next biggie trip will be in the spring (TX, OK & more).  Dates & details & all the updates can be found over at the “What’s New” page at the site:
http://agilitynut.com/whatsnew.html

I hope you enjoyed tagging along with us and that you’re able to sneak off for some adventures yourself before the weather gets nasty.