Well, I guess it was only the western half – but still, it was a lot of territory for one day.  With another big push tomorrow, I might be able to wrap up AR.    It was about a 50/50 mix of sun and clouds.  Which is way better than rain.  Pretty hot and humid (80s?) and the dogs got relief in the Arkansas River two or three times.

We went to the dog park in Burns Park in North Little Rock.  Even though it was plenty big, Grem pretty much immediately scurried sideways under the fence to the more woodsy area.  But her recall has improved quite a lot and she came right back under when I called her.  A two dog limit but we were the only ones there which seems to be the case in the middle of the day on weekdays at these places.  There were kiddie pools and nicely maintained.  But after just a few minutes, we headed over to the boat launch with river access which was a lot more fun for everybody.

Let’s move on to the photos as I’m falling asleep at the keyboard here (after midnight).  This faded beauty is in Crystal Springs:

I saw all the tourists doing it in Eureka Springs.  So I figured I’d fill up the dogs water jug with the “special water”.  The fine print describes the mineral breakdown.  The water came out of the spigot hot! 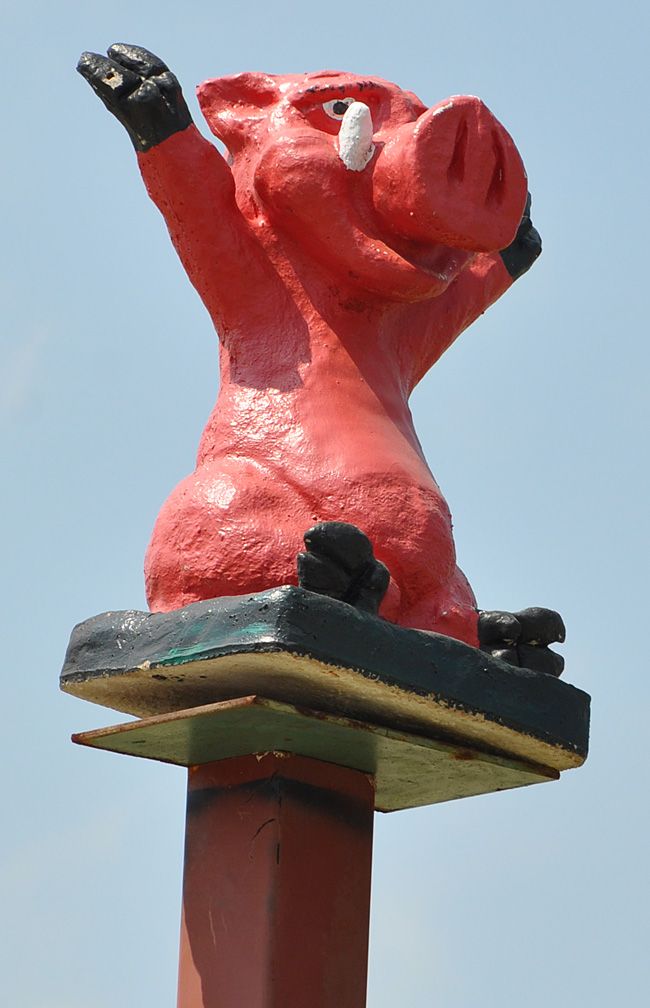 At one of my stops, I found this razorback hat on the shoulder.  More or less clean so I adopted it.  I don’t wear hats except for my wool husky hat in winter.  But this one was just so goofy that I wore it for a while (in the privacy of the van that is).  It only made my head hotter.  I think I’ll abandon it somewhere before I leave Arkansas.  Or maybe I’ll just keep it and use it as a camera protector if the rain starts up again.

Two views – one more serious, one more goofy.  I think my camera distorts things when shooting close up.  I don’t think my nose is really this big.  And even my face shape is slightly off.  Sort of a fish eye effect — but what the heck.  I’m 53 and kind of past worrying about my appearance.

This place was in Fort Smith.  It looks like it might have been a drive-in restaurant originally.  But maybe it was always this Little Mexico garden statue type place:

And while in Fort Smith, I had to pay a visit to Mr. Peanut.  I’ve shot him before but couldn’t remember if he had neon on him.  Since it was getting dark, I didn’t want to miss the opportunity to shoot him if that was the case.  But no neon.  I let the dogs have one last run for the day around his base.  I saw the dome cameras nearby and expected someone to come yell at me any minute but they didn’t.  Nik is visible with blue toy at far right bottom:

6 thoughts on “Day 25: All Over the Place in Arkansas”