I’ve got at least two full days left of LA to do.  And then there’s Arkansas which will probably be equally time-consuming.  That might be about all I can get through before I have to skedaddle home to return to my Real Job.

A few cloudy bits but mostly sun today.  And HOT.  Or at least relative to what the dogs and I are used to.  All these hot swampy bayous and it’s just a taste of what this place must be like in warmer months.  I’ve never been to LA or FL in the summer and have no plans for it.  I managed to find some ponds for the dogs to cool off in but I was careful to pick spots that would be gator-free.

Most of the time, the dogs are more than happy with the half-dirt, half-grass lots that I find for them.  But today, I found a particularly great spot in Houma.  A self-storage place that looked brand new and was surrounded by HUGE grassy lots.  Gorgeous grass, all nicely mowed — and for what?  I’m sure not a soul uses these lawns so I’m happy that at least we got to enjoy them.  And my appreciation to whoever puts in the time and money for such things.

Here’s the young ones running & retrieving (Nik at left just wants a few thousand more throws, while Grem at right is working here for cheddar bits): 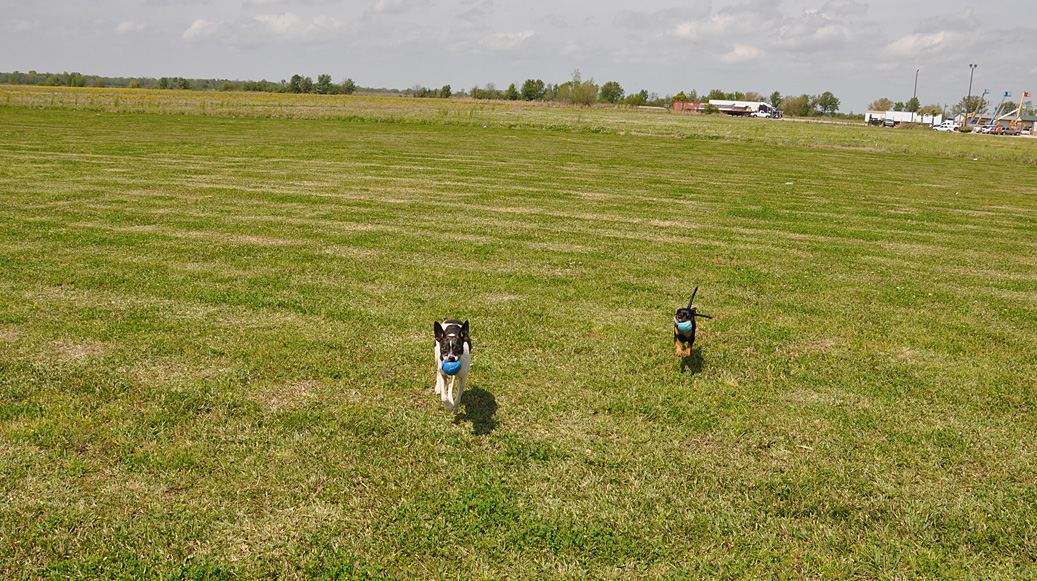 One day, I’ll read the manual and figure out how to take action shots.  The “action mode” doesn’t do much better than my normal “auto” mode.  Anyhow, Grem moves pretty fast so the blur is fitting, and Nik is either wiping out or slamming on the brakes for ballie: 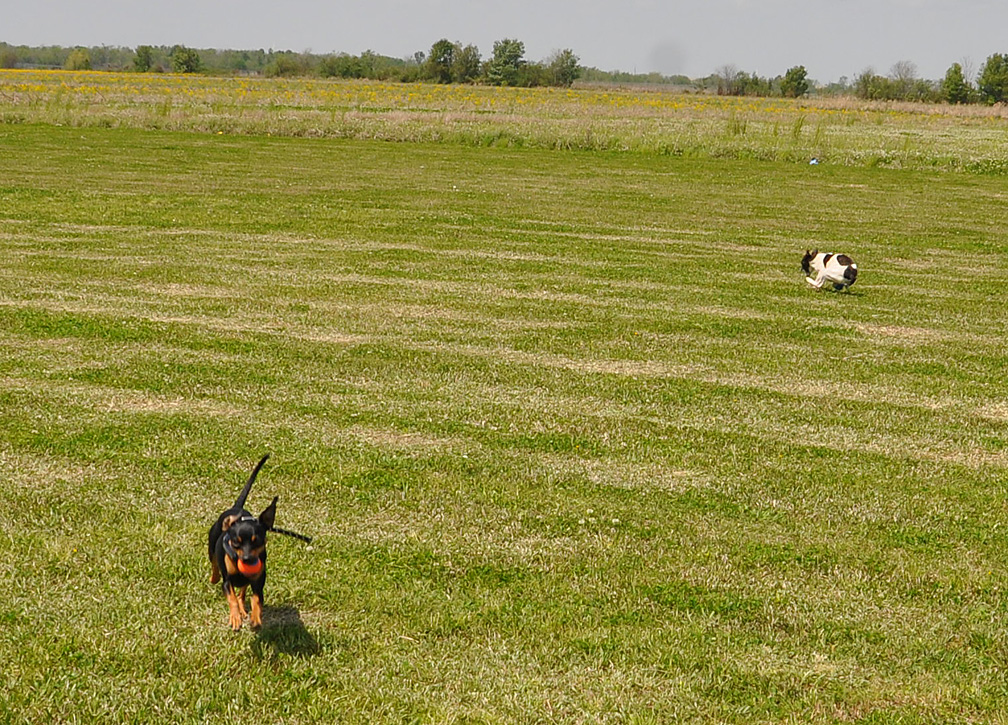 I’m glad that Grip is still into goofing around with toys, running and retrieving, at 13 years old: 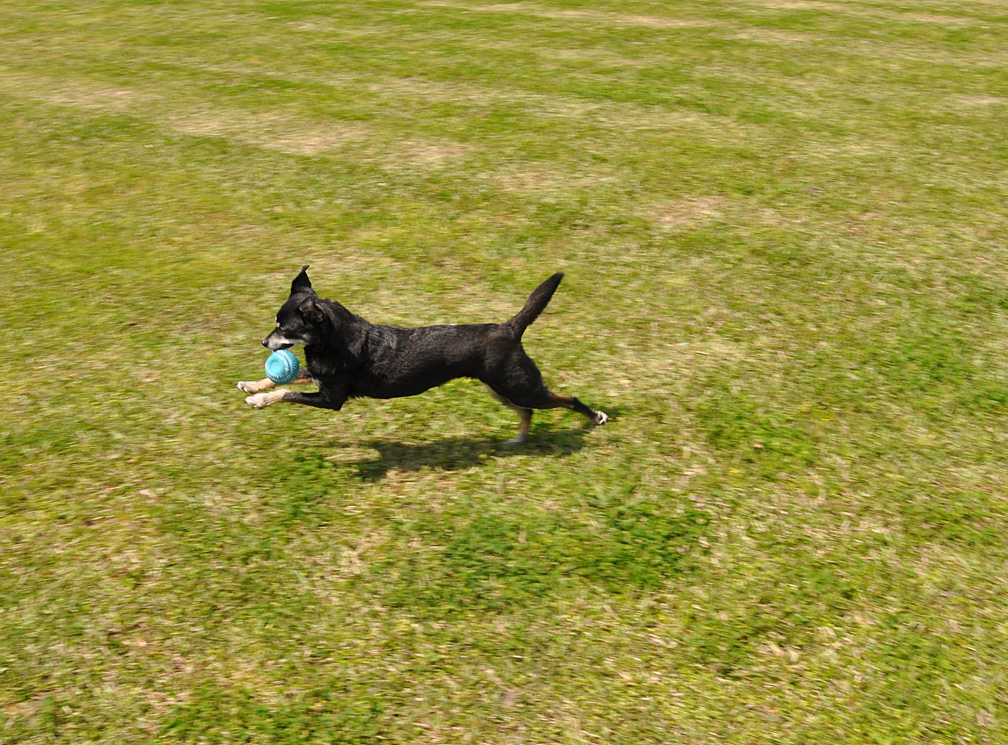 About a month before this trip, Grip’s right eye went red (you can still see that here).  The opthamologist said that her retina had detached and there was nothing that could be done.  The bloody look would gradually fade.  Grip does crash into stuff quite a lot.  Unlike Nik who seems to have perfect depth perception despite being blind in the same eye. 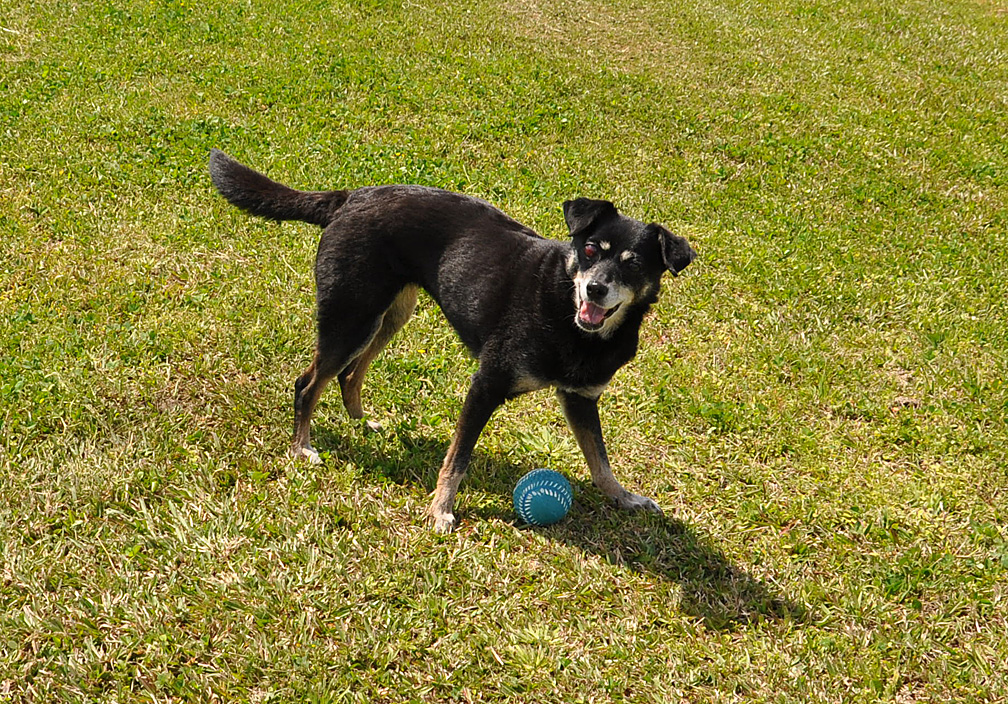 The two seniors and our Self-Storage Paradise.  Fix has never really been into sports.  When I threw a ball for her today, she gave me that “you gotta be KIDDING me” look.  In the cold, she’s a little more into it. But in the heat, forget it.  She did chase Nik a bit though & got some cardio though. 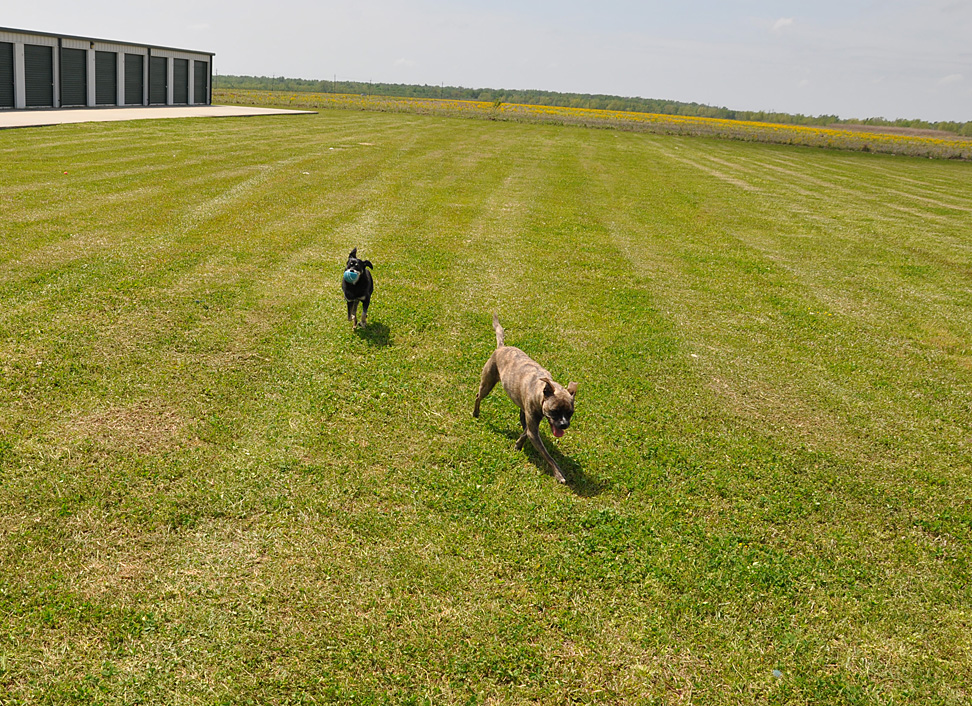 Here’s Sparkle airing out.  Yes, after 22 days of wet doggies and one sweaty human, she needed it! 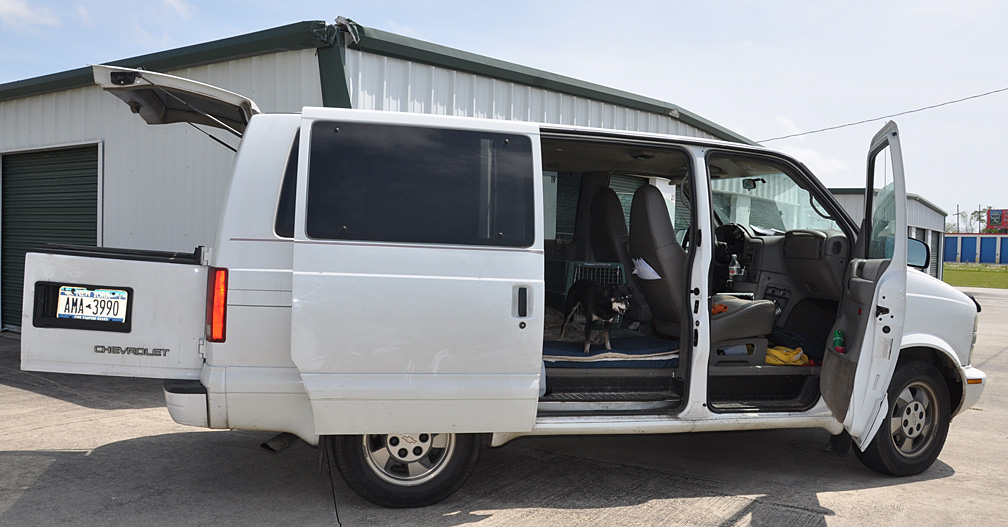 I believe I’ve given you “house tours” in previous posts of Sparkle’s interior organization.  But I don’t think I’ve shown you the back before.  These are the fairly new dog-proof bins with drawers instead of tops.  Nik always managed to work those lids off and present toys to me as I was driving.  Or find toys that he’s not allowed to have and gut them.  So far, this drawer type is working great.  I also put lots of blankets on top of the bins to make it more difficult for him.  He enjoys this as it makes for one big comfy bed and he can just inhale all the toy fumes below him and dream about them.

95% of the bins are a staggering variety of dog toys for all seasons, mouth size and personality.  The other 5% is stuff like a hammer, a jar of aspirin, a screwdriver, bandages, Benadryl (for doggie bee stings), etc.  The laundry detergent, towels, and Fantastic gets used a lot as there always seems to be somebody throwing up or rolling in dead fish.  (Grip says hi.) 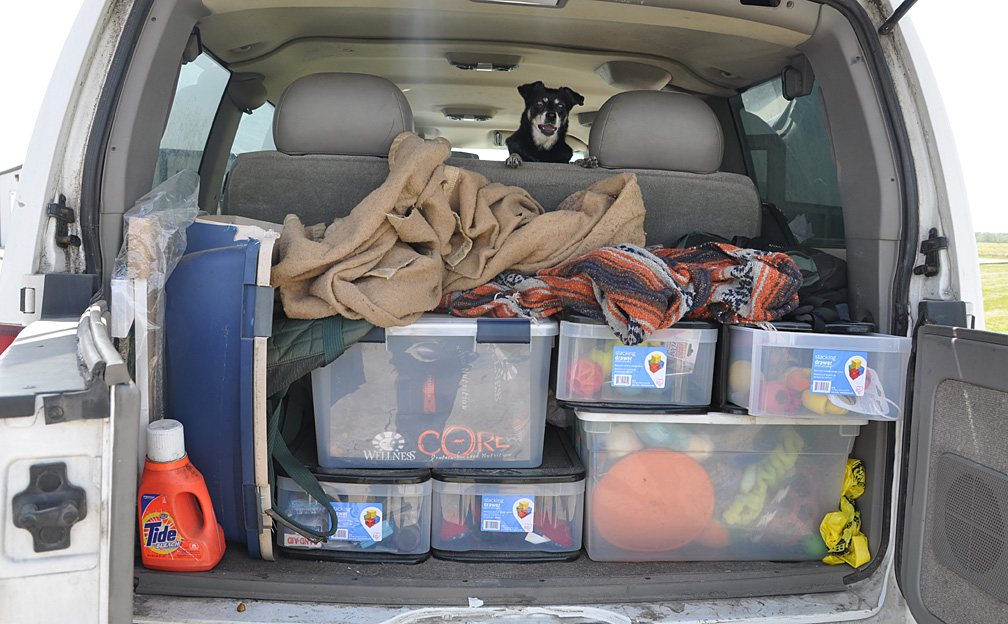 Alrighty then — enough with the dog stuff.  How about some signs — this one in New Orleans.  There were actually two identical ones here — one on the west approach, one on the east:

This sign in Houma — the place looked long closed: 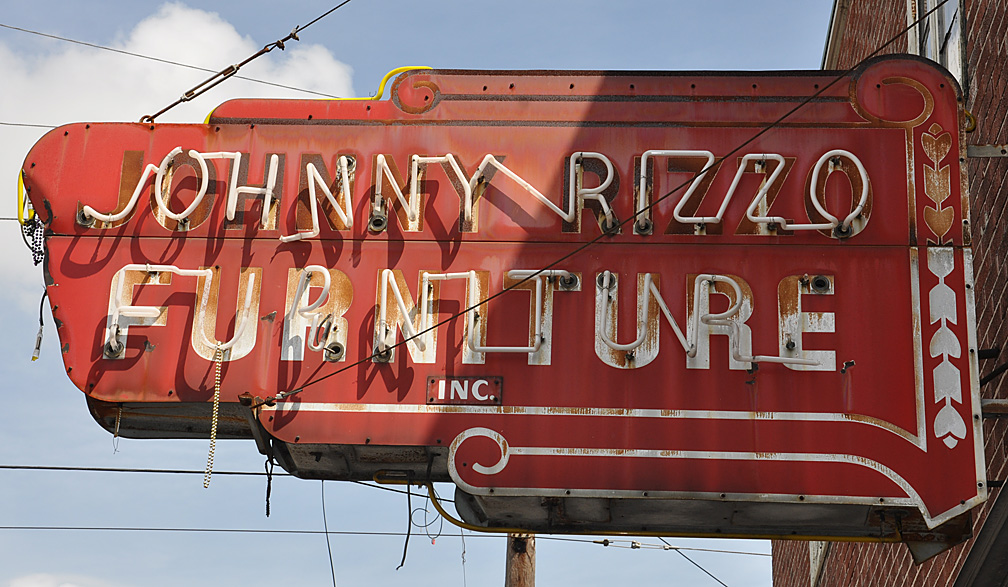 This neat 1960s-looking showroom is in Thibodaux:

Barbera Chevrolet in Napoleonville had this sign set far back from the road.  I’m glad they kept it for sentimental reasons: 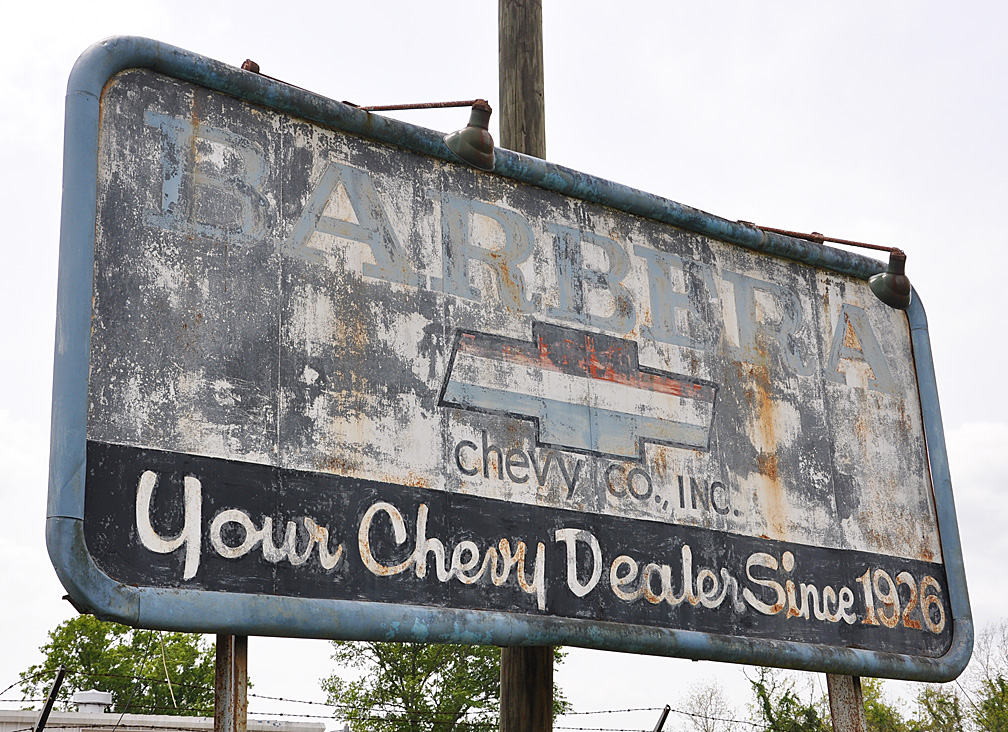 A new Mexican restaurant in Baton Rouge that deserves credit for creating a fun neon sign (that was working even during the day): 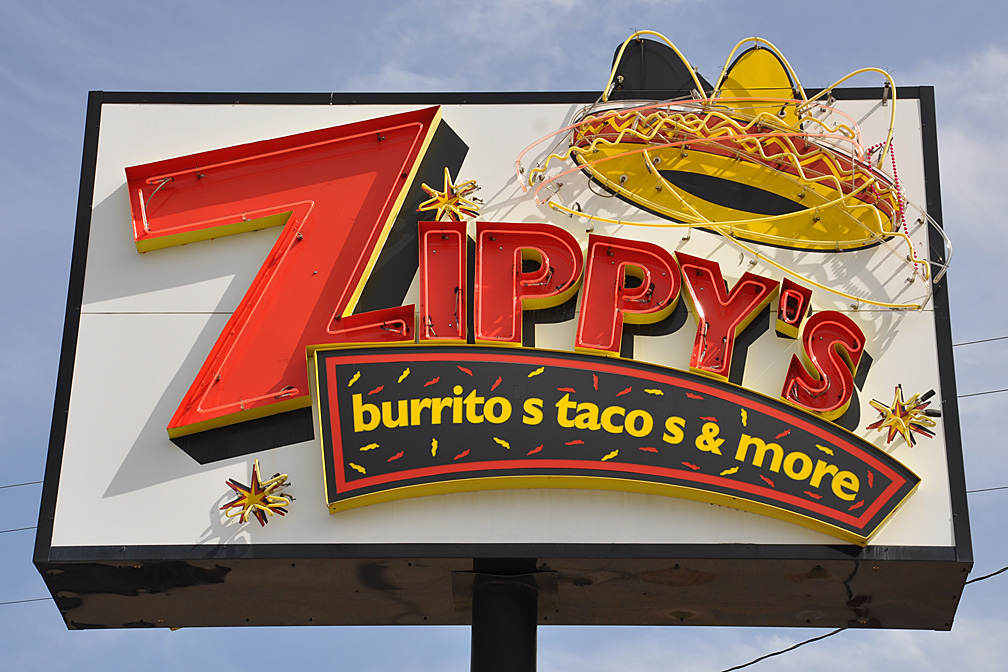 … and for integrating an old gas station into their building design:

Towards the very end of the day, I stopped in Breaux Bridge hoping to see the Simon’s Drugs neon sign. Imagine my disappointment when I saw this hanging there: 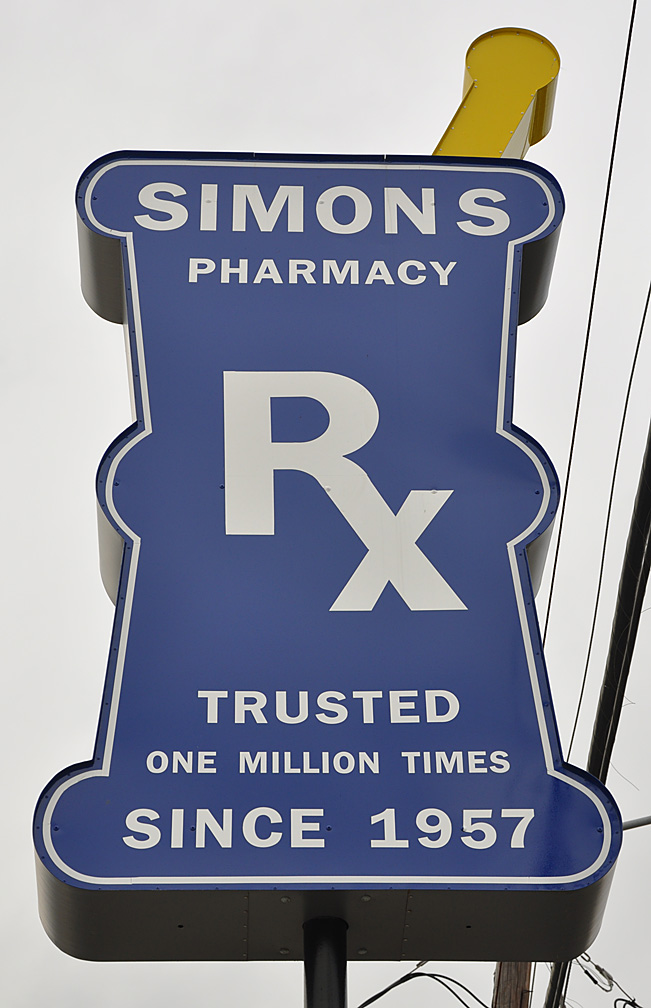 But then I noticed in the windows, that they had saved the two faces of the sign.  I guess they felt they needed to “update” or maybe the city harassed them?  I don’t know the story but at least they are hanging onto the old sign. 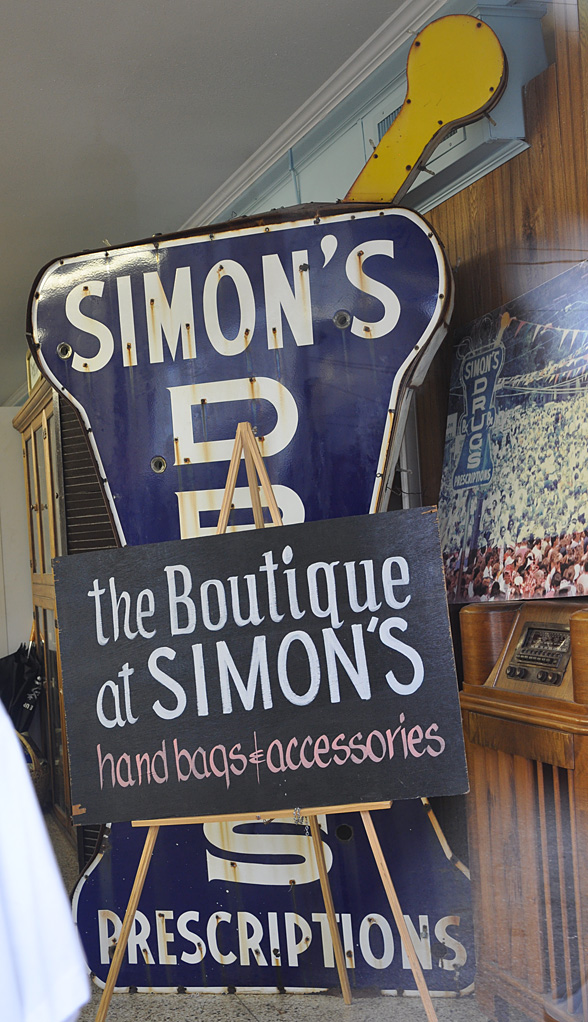 I always make it a point to tell business owners, managers, counter help, and neighbors how much I love, LOVE, their sign or building or statue.  I gush about how historic, important, fun, and whatever other adjectives I can come up with.  I hope you do the same.  Hopefully, we can convince some of these people that these things might be “worth something” (financially and/or culturally) and help keep them in place.