OK, so it was pretty much overcast all day — but still bright enough to make nice pictures.  I lost count of how many times I let the dogs run & sniff on the beaches.  Four?  Five?  Beautiful white sand — that I wasn’t letting anywhere near my camera — so no pictures of that.  And the water warm enough that Nik got to surf for the ballie.  Everybody had a great time and tomorrow I’m hoping for peace and quiet (unlikely).  The more you give them, the more they want.  Exhaustion seems to only last a few hours around here.  Theirs, not mine.  Are you finding my blogs getting stranger and less coherent as I go?  Not even halfway into this trip and I don’t know what will be left of my brain by the end.

No key trouble in the past couple days (yes, I still haven’t give up the shooting time to take care of that — and if I break down, I expect to hear a lot of “told you so”s), no stomach trouble today, and not one Grem Disappearance on the trip (yet).  Tomorrow, we’ll be moving northward into AL which is really hard.  Part of me would like to abandon my lists and maps and just loll around in this Gulf Coast Paradise somewhere.  Spanish Moss covered trees, sparkling sand with itty bitty shells in it, and chirpity tropical sounding birds that I hear but never see.  And another nice thing about Florida:  drivers think nothing about going 90 mph on the interstates and I’ve been happy to blend right in with them for a couple days.  The speed limit is 70 but the only Troopers that I’ve seen have been in the cities, yapping on their cell phones while driving.

OK, here we go.  Strange building in Tallahassee, just south of downtown.  Anybody know what this was used for?

This was a major thrill since yesterday, I saw another one of these signs:
http://www.flickr.com/photos/agilitynut/4458334241/
I assume it was a mobile home chain then.  This repurposed sign was in Tallahassee:

Speaking of repurposed signs, how about a former Pizza Hut in Tallahassee:

Neat lights with canopy over a former gas pump island – in Blountstown:

The Domestic Laundry in Panama City — still in business:

This is how Gremmie rides about 80% of the day.  Drivers that notice to the left of me either smile or yell at me.  She’s balancing left legs on the door shelf and right legs on my arm.  She only weighs about 10 pounds so it doesn’t bother me that much.  If she sees a motorcycle, dog or something bark-worthy, she immediately jumps in the back, over my shoulder and goes nuts.  Been doing this for years now and it doesn’t distract me one bit.

So, at one of those Florida Welcome Centers yesterday, I had to stock up on this Southern snack item.  It was a hard choice between three types:  original (peanut, caramel & marshmallow), cashew (caramel & marshmallow), or peanut butter (marshmallow, no caramel).  I went with original and was not disappointed.  I’ve had them before but this was a super fresh batch — much smoother, meltier.  Wonderful!  Six of them and I think I have two left.

I shot loads of stuff in Fort Walton Beach for the website — but there were lots of bloggy things as well.  I’m not sure how old “Jimmy’s” is but the building appears to be 1960s:

Too bad “Donut World” was long closed cause you know I would’ve given them some business:

I asked some locals if this bank building in and little similar mall next door were old or new.  They assured me they were new (1980s or so).  [wrong!  see comments later below]

There was another similar bank about a mile north of here which must’ve been the same architect and probably the same bank, another branch.  Those lights have gotta go:

This gets my Strangest Building So Far award for this trip.  The roof of this house? business? had the same bulge in the middle above the back door.  And don’t overlook the other odd details on this thing:

Quite cheerful for a pawn shop.  Note the 3-ballie pawn shop symbol sign on the far right: 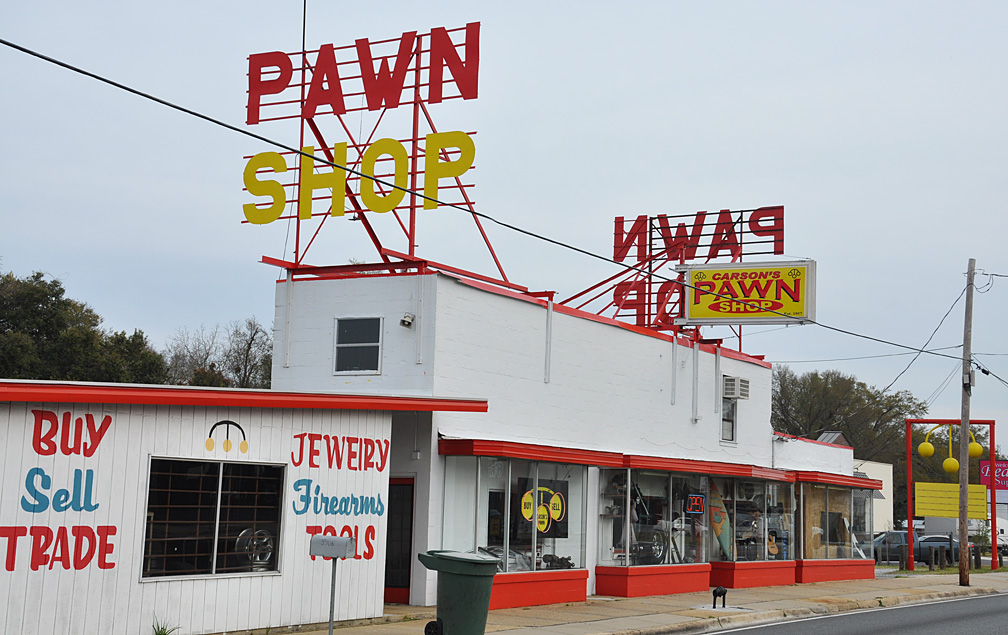 With just minutes left before sundown, I was able to scoot out of Pensacola and grab some things on my list for Milton and Crestview.  Crestview must really suck if you’re a teenager.  At least they let you ride your bike: