Not exactly rowing our way — but it sure felt like it! The rain did not stop for a single minute. Not once. Until the sun went down. Argggggh! And it rained even harder than yesterday. My planned route through the mountains from Thurmont to Hagerstown was police barricaded off — impassable due to flooding. Yes, the rivers were wickedly wild everywhere we went. And yes, I’m being careful. I’m not one of those fools that tries to “gun it” and make it across water on the road. You won’t be seeing us on the news. Here’s a threatening little stream in Thurmont, MD. All that separates it from this house is a little concrete wall. When I drove by, the family looked like they were calmly watching TV. Sheesh. 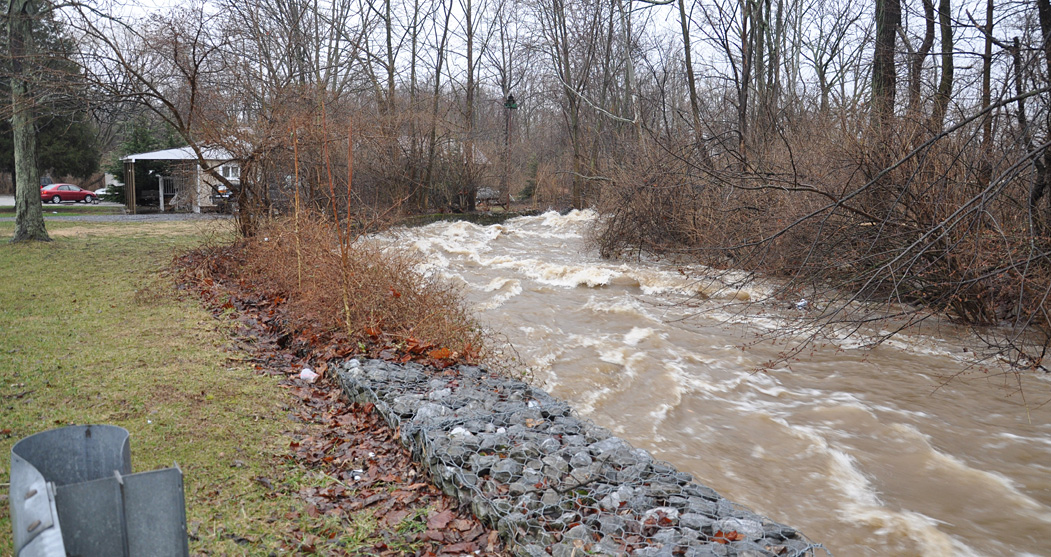 But I’m skipping ahead.  The day started in NJ.  In Stratford, I passed this Safeway-esque building gone Goodwill.  At least I don’t think this was every a Safeway based on the shape of the sign at the left.  I’m ashamed that I don’t know what this was and am relying on my food store junkie friends to chime in.

Can I get a bumper sticker that says “I brake for bowling pin signs”?  Can we sell them at the SCA Conference and make a ton of money?  This one was in Stratford as well:

This simple yet elegant pin sign has apparently weathered many eras and names and now has to tolerate flashing red obnoxiousness beneath it.  Now there’s a run on sentence that I’m not going to fix.  Here’s something I’ve never understood.  How can cities get away with prohibiting neon signs and forcing their removal for being roadside “distractions” when what could be more distracting than changing-text LED signs?  And who’s going to be distracted by a neon sign when they’re already completely distracted by their cell phones while driving.  Don’t get me started!

What’s not to love about Fornaro’s Liquor in Pennsville, NJ:

The Penn Jewelers sign is also in Pennsville.  Until one second before I took this photo, there was a blackbird in the broken gap in the diamond at the left.  Damn!  I love getting birds into shots for scale.  Better rush if you want to see or shoot this sign as the building is now vacant.

Moving on to Maryland.  If you grew up in the Churchville area, this is probably heartbreaking.  This used to be the site of both the Big M Drive-in Restaurant and Movie Theatre.  It closed five years ago and this is what remains. 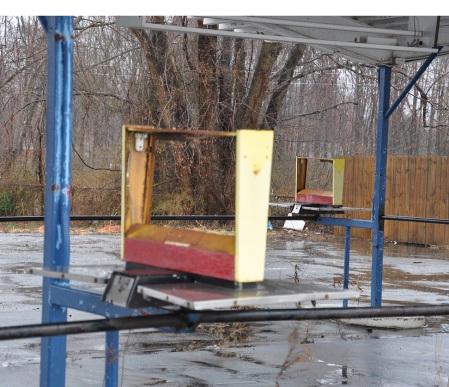 OK — this is getting to be a bit of a downer — maybe it was all the weather, ya think?  So let’s see if I can end on a cheerier note.  This interesting building (house?) was in Middletown.  I assume it was a blacksmith’s / grinding place from the grinding wheel and the giant anvil on the wall.  The crescent moon shutters are sweet.  But the knife over the door was what had me backing up dangerously on a very busy highway.  (Don’t worry!)

In case I forget to mention it on the 17th, Happy St. Patrick’s Day!  This place is in Thurmont:

8 thoughts on “Day 2: Rowing our Boat to Maryland”