I get lots of emails asking for help with identifying gas stations.  While I don’t consider myself an expert, I have studied them for years and I’m happy to help when I can.  The subject is way too big for one post so I’ll just offer some basics here about a couple brands & designs and revisit the subject between roadtrips later on.

There’s a lot of confusion out there between Phillips 66 and Pure Oil cottage-style stations so let’s start with some generalizations about them.  It’s actually very easy to tell the difference.  Here’s a classic Phillips 66 from Chandler, OK:

Note the chimney at the front (although not all P66 cottages had these) and the steep gable above the arched doorway.  The round windows on the chimney and the side of the building originally had glass Phillips 66 logos.  This station still has the multi-colored roof tiles.

Here’s another example of a P66 from Stratford, TX.   Note that this station has the chimney is to the right side of the door.  There’s also an original “P” on this chimney.  Not all P66s had chimneys but the buildings all basically looked like this.

Even this early P66 in McLean, TX (the first built in TX) had a similar design: 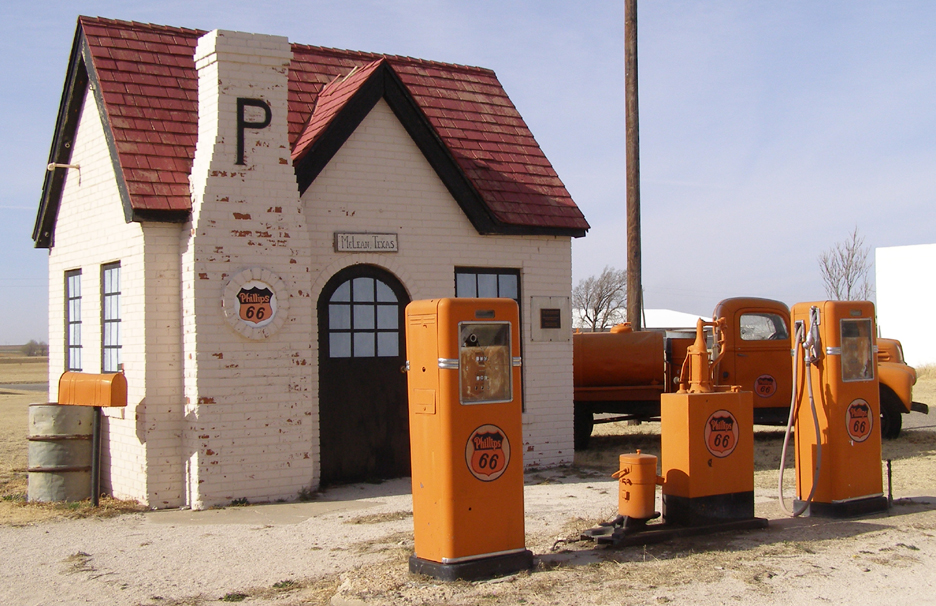 Although the siding has been added, the other building features are original.  Note the differences between this design and the P66 design:  chimneys on the sides of the building, the copper hoods above the left window and doorway, the flower box on the small window on the right, the step and hand rails at the door, the blue porcelain enamel roof tiles and chimney tops.

Here’s what Pure Oil’s “P” looked like on the side of their chimneys – skinnier and more Gothic in style than the ones that Phillips 66 used.  This one is from Washington, NC:

The smaller Pure Oil windows had faux open shutters.  The drainage spouts bore “Ps” as well.  There were also brass lamp light fixtures.  This Lyons, NY station still has all of these things.  There would also have been a flower box below the shuttered window:

Pure Oil had a few variations of these cottages but with the same details.  Here are a few other examples.  From Dayton, OH.  Even with the office details stripped, you can tell where the larger window would have been.  Even with the roof extended in front a bit, the blue roof tiles and chimneys are there.  The office was messed with quite a bit here:  the door is now where the little window was & the details are all gone.  The brick work here is original and has been emphasized with red and blue paint.  This station has what I call the “slopey bay” on the left – another common design element used by Pure. 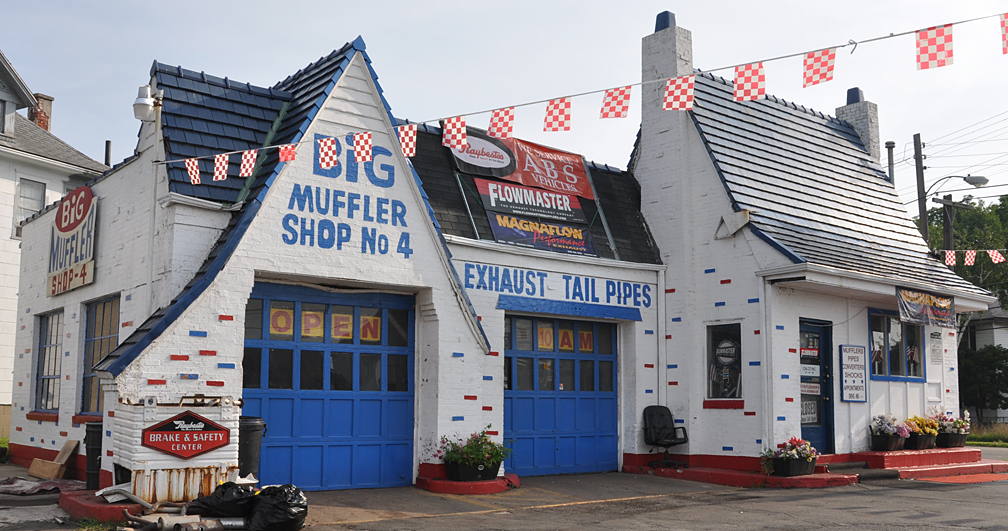 Here’s the same basic Pure Oil design with a canopy from Jacksonville, FL.  Phillips 66 did not make a canopy version of their cottage stations.  Note all the door & window details described above are still there:

Pure Oil also produced what I call the “fat chimney” design.  This one is from Lynchburg, VA.  The chimneys are still on the sides of the building and there’s that step-up doorway with railings.  Notice also the weathervane on the service bay part of the building – another uniquely Pure Oil element used with the fat chimney design.

So I hope that helps.  Other oil companies produced cottage stations as well but the details described above should lead you to correct conclusions.  For lots of other examples of Phillips 66 and Pure Oil stations, have a look at the gas station section at my website:
http://www.agilitynut.com/gas/main.html