Grey skies most of the day turning to rain late afternoon and early darkness.  No photography awards today.  The crappy weather meant I had to stop shooting about an hour and a half early which sucks photo-wise but the upside is I’ll get some much needed extra sleep tonight.

Less than a week left now and I’ve come up with the plan.  The next two days (Weds & Thurs) will be more Iowa with possibly a few must-see stops in southern IL & IN en route to OH.  Friday will be a “day off” spent doing research at the American Sign Museum in Cincinnati.  Tod has agreed to let me poke around in the old Sign of the Times magazines and what-not.  Plus there will be a tour of the new not-open-yet building, recent acquisitions, etc. and lunch or  dinner.  So posting to Flickr & the blog will be light that night, if at all.  Saturday, I’m squeeze in some southern OH & northern KY.  Then Sunday will be the brutal drive home.  Back to work Monday night.

The dogs got lots of water time again today.  We went to check out the Lewis & Clark Dog Park in Sioux City in the morning.  A two dog limit but the only other two people there didn’t say anything about it.  It was a huge space, great fencing, separate areas if you need ’em, loads of fun.  An unfenced lake right across the road in the same park that I’m sure no one would mind you using if nobody else is around.  I’d definitely go back to this place if I’m in the area again:
http://www.sola-sc.org/index.html

I stopped first thing in the morning at a mall adjacent to undeveloped land so that Nik could have his mandatory 20 minute morning gallop.  Afterwards, Grem managed to slip through the van door and off she went.  She’s been so good lately but I obviously can’t let my guard down for one second.  There she went at full tilt, god knows where, sans collar.  Crap.  I called for about five minutes and checked nearby dumpster areas, then went hunting her down in the van, yelling her name out the window.  Luckily, it was about 8am and nothing was open yet.  Finally saw her and I just acted all happy-happy and she came running for some cheddar and praise — when really I wanted to strangle her.  How many lives can one dog have?

I really didn’t intend this trip to be the Louis Sullivan Tour — but the  man just keeps turning up!  Actually, according to this site, the details on this Woodbury County Courthouse in Sioux City were created by Sullivan’s protégé, George Elmslie.
http://www.grinnelliowa.gov/SullivanBank/HistoryRoad.html
http://www.organica.org/pejn276_1.htm 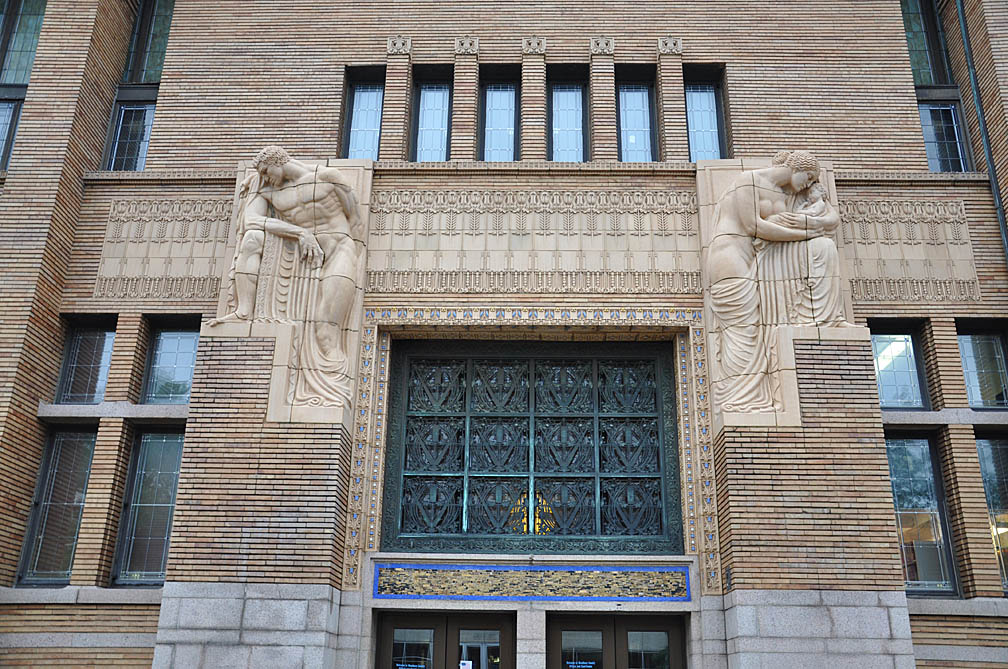 Far humbler architecture, this building at first glance looks like it might have been a Pure Oil or Phillips gas station but the gable is too steep.  According to this website, the Green Gables restaurant opened here in 1929:
http://www.offenburger.com/lspaper.asp?link=20031004 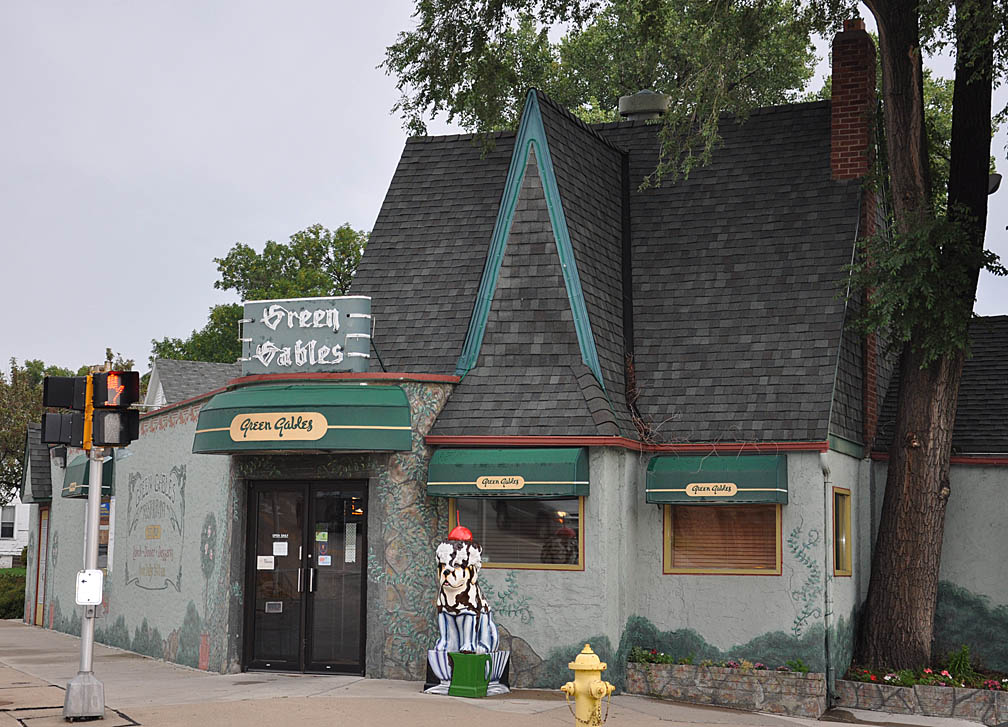 And even humbler, this little building bears a slight resemblance to Valentine diners:
http://www.flickr.com/photos/agilitynut/3822285053/
I assume it was a restaurant at some point pre-splitting-up with two doorways?  Sioux City-ers — what say you?

The little town of Moville (population 1467) has this sweet castlesque City Hall.  Probably much nicer before it went the retail route.  Deco in feel — 1930s?

I had assumed Correctionville was connected with some sort of correctional facility — but no, more interesting than that.  A man explained to me that it had to do with the curvature of the earth and that roads had to be realigned and this town was the lucky one to inherit the task.  This site explains it a little better than I can:
http://correctionville.govoffice2.com/ 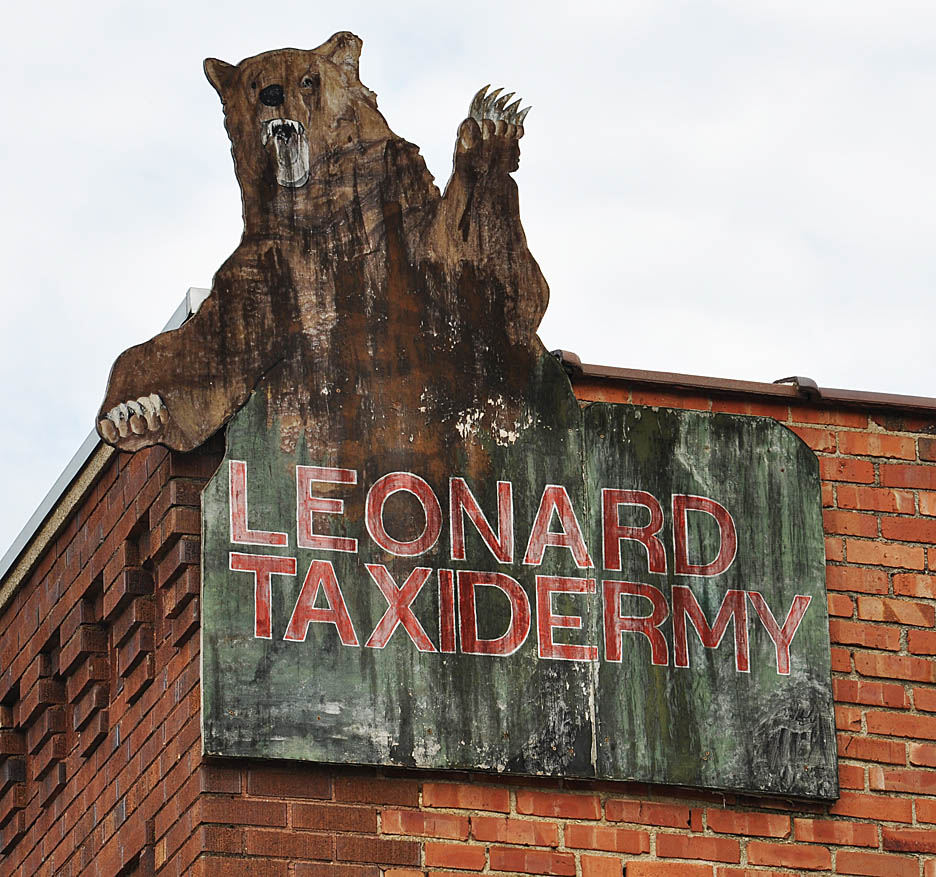 I had long wanted to get to Ida Grove.  While most would consider it the ultimate kitsch destination, I take such things very seriously.  Numerous buildings throughout the town designed to look like castles.   Here’s the story:
http://www.idagroveia.com/Resources/pages/aboutig_castles.html

And I had to see the half-scale replica of the HMS Bounty on Lake LaJune.  Even though, as you can see, a huge STOP sign — private property. Huh, what sign?  Nobody saw me — in and out.  Except for those two freaking dogs that have to bark and scream every time they see water.

While Ida Grove respects its castles, I can’t say the same for the rest of its downtown.  “The Ugly Truth” is right.

At least this nice plastic sign hasn’t been touched:

I went to Boone to see a gas station that was a complete dud in my opinion.  But to compensate me for my effort, the gods of roadside gave me this lovely moderne vitrolite sign.  I cropped most of the storefront out because you really don’t want to see what they’ve done with it.  Oh, okay, and my reflection was really annoying and unflattering.

And to close, another dashboard food still life.  These two representatives from the sugar family have kept me going for the past couple days of monotonous, mostly rural driving.  Mr. Lemon Cookie on the left is from the Hy-Vee — a regional supermarket I think that I have seen only or mostly here in Iowa.  Honestly, I’ve gotten plenty of salads and bananas and non-junk food stuff from them as well!  Their signs say “employee owned” which I think is a good thing, right?  These lemon cookies are now more like cookie dough as the humidity has really zapped them (90 today I think).  Whereas, the chocolate guy on the right is holding up pretty well.  These are perhaps my favorite cookie made — not sure if it’s their taste or the fact that they are kind of hard to find.  “Pinwheels” — even the name is fun.  Chocolate cookie garnished with marshmallow and enrobed with a chocolate shell.  At least I think that’s how the folks on the Food Channel would describe them. 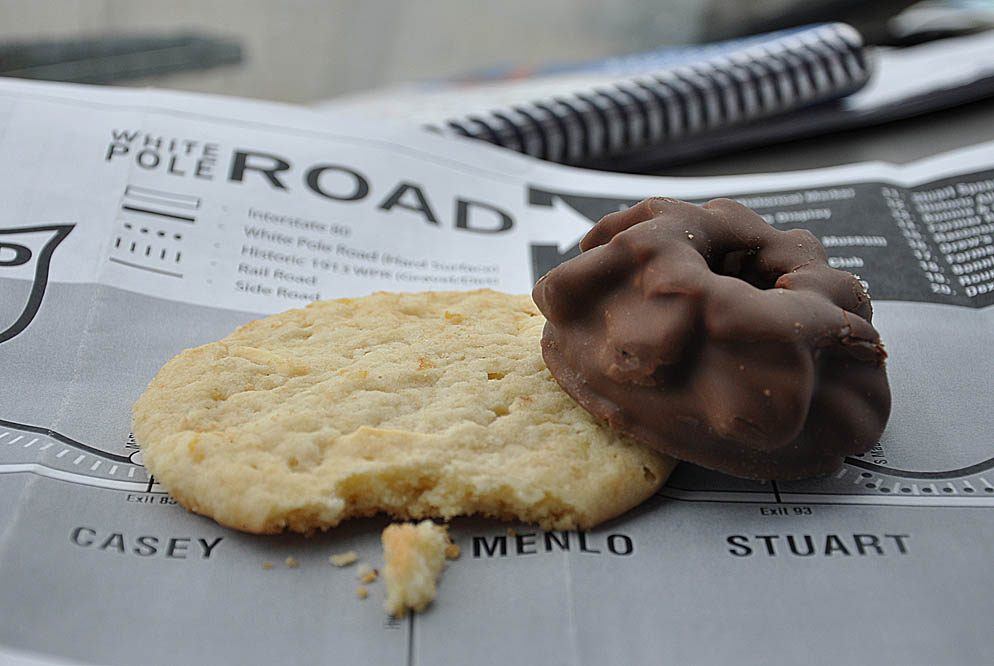