An awesomely productive day — hence, posting this in the morning rather than last night.  I was literally falling asleep at the keyboard as I was uploading the Flickr stuff.  Feeling rejuvenated now.  Looks like it’ll be another sunny day.  Yesterday, was kinda grey and disappointing in the morning.   Finally gave way to sunny skies but no fluffy awesome clouds like the last few days. Those clouds make even the most hideous plastic sign look dynamite.

In doggie news, no mishaps or new additions.  They got loads of exercise yesterday so I’m hoping to get by with a minimum today so I can polish off Ohio.  In addition to the grassy fields, I found (or should I say Nik identified) a river on the way to Orient.  We spent a good chunk of time at the Big Darby Creek.  Since I’m such a tightwad with the A/C, the kids really enjoyed swimming.  Well, in reality, it’s not about the swimming.  For Nik, it’s about the toy, of course.  For Fix & Grem, it’s all about the stuff I throw out there for them to eat.  Anything that’ll float will work.  I ran out of Goldfish so I’ve been getting by with Iams.  Not our usual brand, nose in the air, but what was donated to us by the Dog Warden back in Delphos for bringing in the Dalmatian.  When I wasn’t looking, he snuck in about four bags of this stuff and a giant box of biscuits.

Nik has been swallowing WAY too much water since he pops at his ball or toy in the water about twenty times before actually gripping it in his mouth.  Each pop, he swallows about a half cup of water.  He then pees later for about five minutes.  So I’ve devised a custom cover (an old sock) which helps him to pick it up on the very first try.

Grip does not go swimming unless it’s super hot and the water is calm and shallow and the floaty treats are amazing.  She got caught in a tiny current a couple years ago and that was that for her.  So she stays on shore while the other ones are out there.  She’ll wade in up to her tippy toes to get the easy-to-reach treats.  She mostly finds bits of whatnot on land to sniff, munch or pee on and is happy with that. 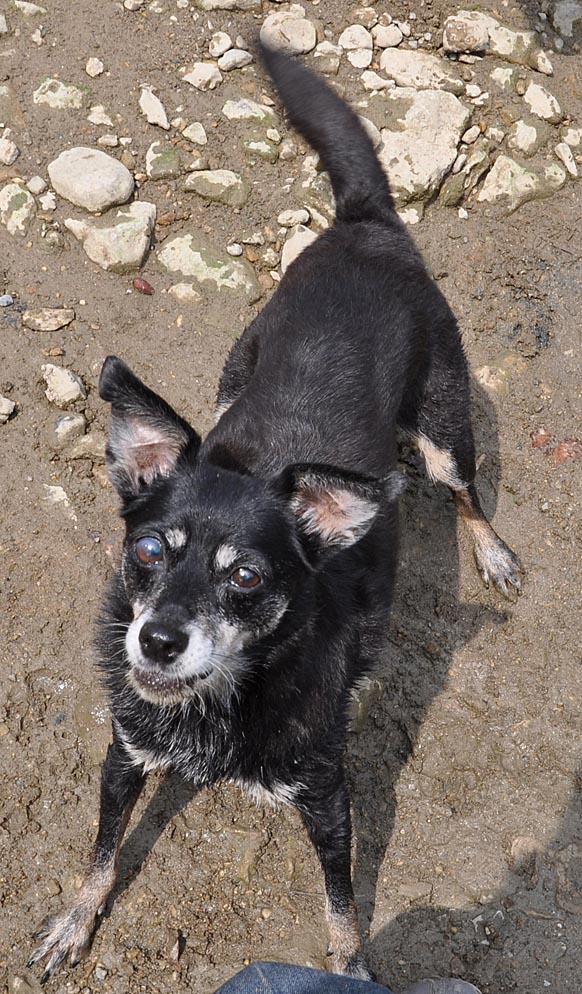 This would’ve been a great shot if I had remembered to use the “Action” setting.  Sorry D90 – not your fault.  This was Grippie jumping up to give me a kiss.  A big nose schmear on the lens ended our photo session for the day. 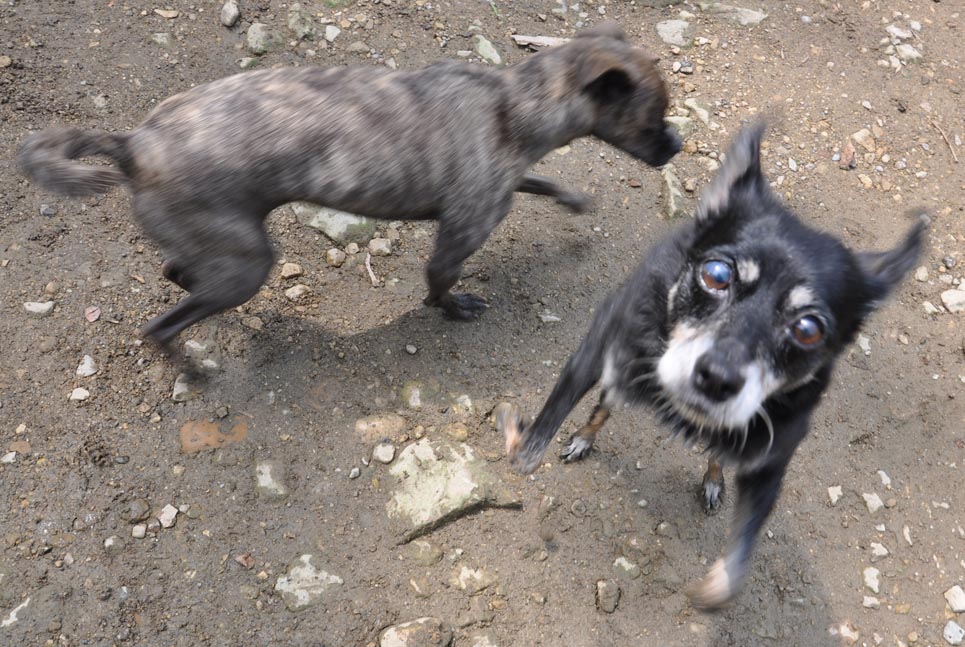 On with the roadside stuff.    Leaving Zanesville in the morning, I saw this crane.  No workers were around.  Sure didn’t look very safe to me. 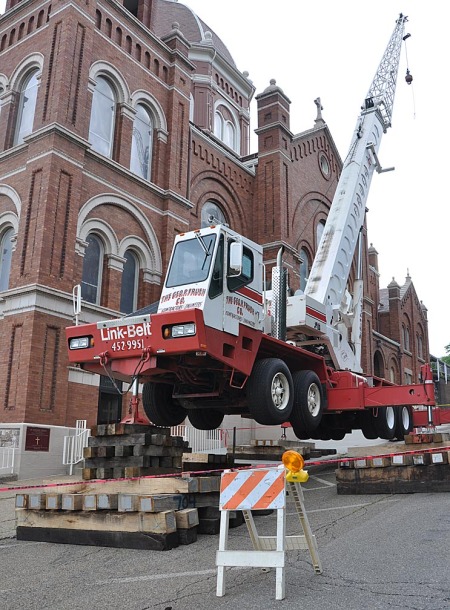 These guys were at Dusty’s Salvage & Supply in New Lexington.  The guy sitting on the sign went up and down on this mini oil rig, driller, whatever you call them.  Super cute. 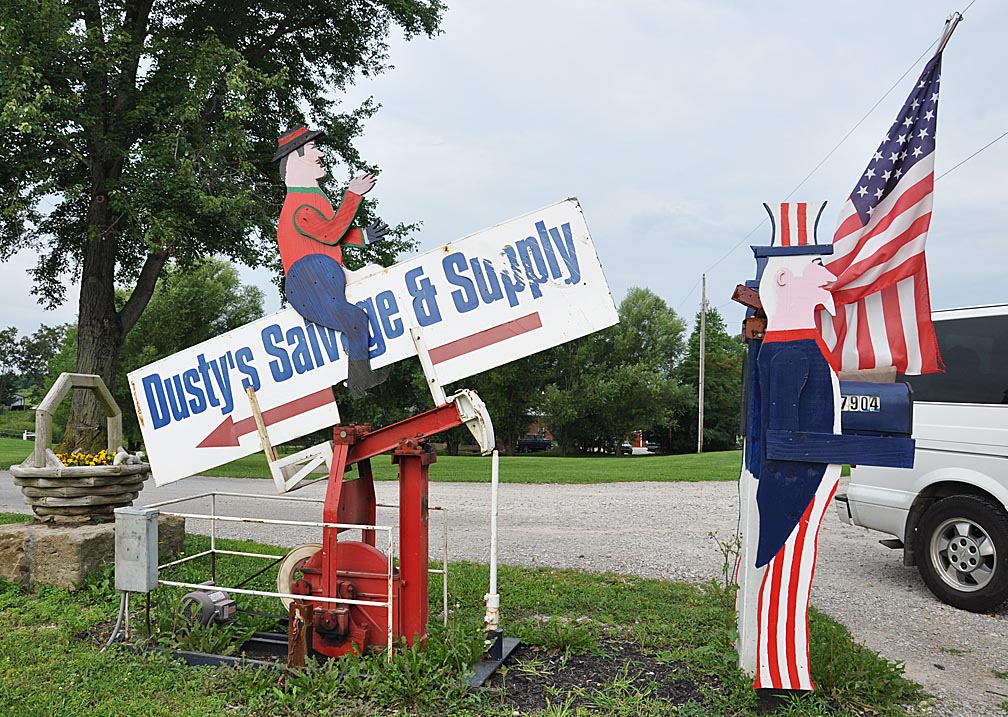 Who knew they had moonshiners in central Ohio?  Papa Tom’s Pizza & Subs is in New Straitsville:

Love the birds’ creative use of this plastic sign in Grove City.

A nice mid-century structure at the Town House Motor Lodge in Springfield:

I don’t know which makes me sadder:  the horrid adaptation of this sign or the condition of this former Howard Johnson’s restaurant.  Also in Springfield:

Actually, this hurts even worse.  What the hell happened!  This Springfield sign for Reco Sporting Goods had a nice hunter guy with a pipe standing on some logs. Looks like it fell off its hinge.  Not sure if this is the end of this sign or if they will repair it.  Here’s a link to what the sign used to look like (warning: crappy photo that I shot many years ago):
http://www.roadsidenut.com/reco403.jpg 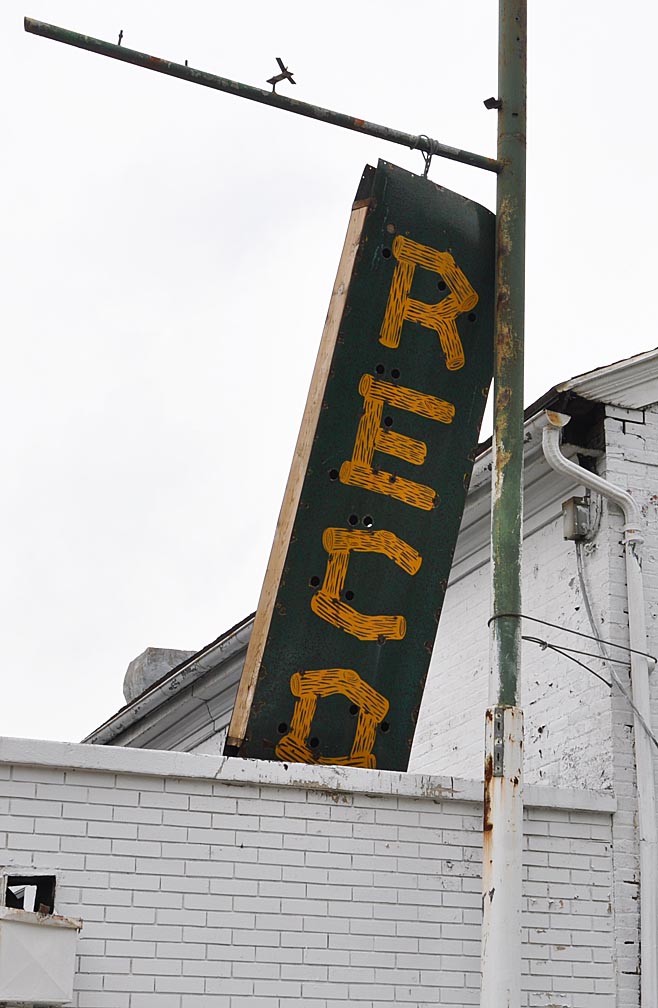 Two keys are better than one.  I assume the top sign came first — glad they kept it.  Springfield.

Maybe they’re restoring this old Phillips 66 in Springfield — or maybe that was the plan.  Or maybe they just like the skeleton look.  Or maybe the canopy became a safety hazard?  Here’s another crummy photo taken in 2003 to show you what it looked like then:
http://www.roadsidenut.com/springgas403.jpg

A nice, or not-so-nice, graphic depiction of a coney dog.  Being a vegetarian, I can’t be the judge.  This at the Dairy Dreem in Dayton.

I don’t usually shoot Arby’s hat signs since they are still relatively common.  And I’m not even so sure they aren’t still being produced — many of them sure look brand spanking new to me.  This one in Dayton was a stunner and I couldn’t resist it: