Today was a little cooler (highs in the low 80s) but still lots of sun. It wasn’t as produtive photo-wise as the past few days since I had a lot of miles between stuff particularly in the morning. Speaking of miles, a milestone for Sparkle today as she turned over 200,000 miles. I’ve only had her half that (bought her in 2006? with 108,000 for $8000 – such a deal!). What journeys we have shared together — all over the country, in all sorts of weather. I’ve only replaced the brakes, shocks, battery, tires — general maintenance really. I’m very much into those 3,000 mile oil changes and have been putting in the high mileage oil since I bought her. She runs like a brand new van and I love her to death. I wouldn’t hesitate for an instant to buy another Astro Van though I understand they aren’t making them anymore?

The kids got by with abandoned lots and quasi farmland today. I’d like to find them some grass sometime soon. They haven’t been on green grass in what feels like half a year.

On with the show! If I can complain for just a minute, something dramatic is going on with the Coca-Cola company. It seems ever since I got here in SC, you can’t find a 20 oz. bottle anywhere. They say they are phasing out cans and replacing them with a 16 oz bottle (99 cent size) and have added this 24 oz bottle ($1.49 size) to replace the 20 oz. This seems absurd to me and I’m hoping it’s just a regional thing. The 24 oz is really silly big and the 16 oz is silly small. I did find a 20 oz. today (not shown in the photo) and was disappointed by its lack of fizziness — probably a month old or more. Ick.

This little building was in Greenwood, SC (I think).  At first glance, I thought it might be a former Pure Oil gas station with the double chimneys on the sides — but then I realized the brickwork and size were wrong.  This one also has cute little vent-like windows up next to the chimney.  This building is set back pretty far from the  road so it’s still possible it might have been a gas station office.

This guy had me fooled.  As you are coming down a super wide road down a hill into Greenville, you see him early on up on the roof.  I found myself wondering what kind of nut would be up on a ladder like that til I got almost there and realized the joke was on me.  At Trader’s Gun Shop.

Here are a couple mind-boggling restaurants – also in Greenville, SC.  The Acropolis is composed of these five hexagonal (or thereabouts) structures.  I’ve never seen anything like it.  I don’t know if this was inspired by any Greek building or if there was another restaurant here before. 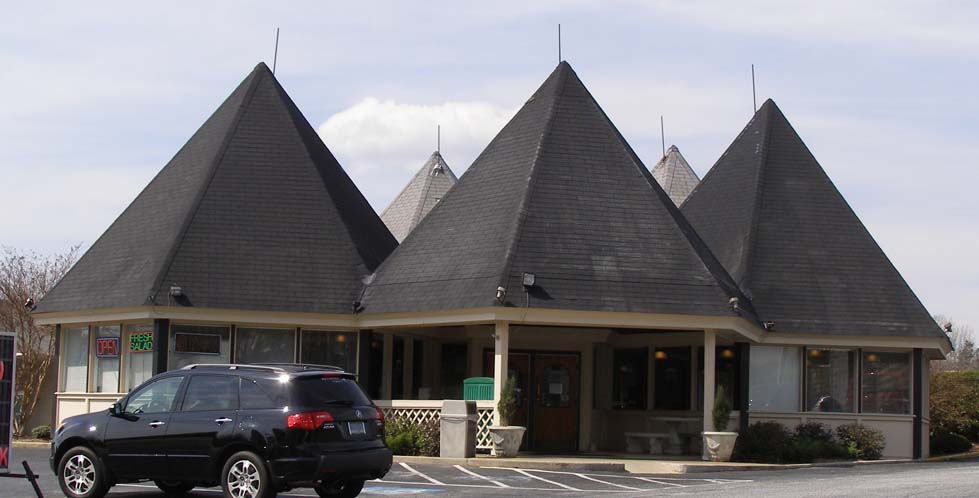 Just next door is this about-to-open fast food place.  Now, maybe it’s the skeptic in me — but in this economy, does it seem like a good idea to pour money into such a venture?  What kind of food would they be serving:  crepes, waffles, and ????  I don’t see a flood of people dying to check it out when there are an abundance of options nearby.  I wish them well!  And had it been open, I would’ve gone in for a look-see.

In Northeastern GA, somewhere southeast of Helen, was this nifty sign promising everything.  But they were closed — probably just for the season as the place looked pretty cheerful otherwise.  I would’ve gotten some peanuts in the shell so the dogs could have fun making a complete mess of the van.  That’s one of their favorite treats & thrills is ripping off the shells to get the goodies inside.  Possibly even more fun than marrow bones.  It takes months to get rid of all the debris but I don’t mind it as it’s a reminder of the ridiculousness of the event.

I love the lightbulbs and wonder if they are/were animated to convey the illusion of flames at night:

Somewhere southwest of Helen, GA (I was in the sticks a lot today so determing exact towns was difficult), were the remains of a gas station.  A pity that this plastic Shell sign was broken.  I would’ve shot from the other intact side but the sun was right there.  The station itself was not as romantic — with mostly junk in front and inside.

I had to check out this place since I’ve read so much about it.  It was closed (seasonal also I assume) so I had the place to myself.  Poole’s BBQ is in East Ellijay, GA — which is pretty much nowhere NW GA.  The gimmick is that you can buy a pig for $6 or so, personalize it with your name and have it added to the hill.  There’s also the pig car  which I was surprised didn’t have a coiled tail.

Finally, a little roadside story.  Sometimes when I fail to find an address for something before a trip, particularly if it’s in a smallish town, I’ll bring along a photo to show/ask the locals for directions.   That seems to be a much better method than just describing something.  In this case, I was looking for Yaggie Cleaners sign in Spartanburg.  No listing at google (other than an address which from the map appeared to be in a residential neighborhood).  In the heart of town, I asked an older fellow if he lived in town and had seen the sign.  He wasn’t sure – sent me to his buddies in a restaurant nearby who’ve lived in town forever.  Perfect.  They sent me down East Main Street and agreed it was “before the Bank of America”.  Easy enough.  I drove a few miles — scrutinizing peripherally, passed the BofA & still no sign of a sign.  Another mile or so, I saw a cleaners and thought I might ask them about the sign.  Well, they were it — the sign had been there, removed last May.  They had changed names & another cleaners (Fowler Brothers) bought the sign.  There was talk of changing the Yaggie part of the sign but that’s where the story ends for now.  I’ll have to give Fowler Brothers a call when I get home — unless somebody here feels like doing a little research for me.